An example will help clarify this formula.

Now we can calculate the relative risk of having an upset stomach (event) after taking the new medicine (exposure).

Thus, the group looked is 0.57 times as likely to be overweight or obese if an individual performs moderate exercise. Stated another way one is 43% less likely (0.43 = 1 – 0.57) to be overweight or obese in the surveyed population if moderate exercise is performed. When the event is an improvement in health due to a health exposure, then the relative benefit is usually reported rather than the relative risk.  The relative benefit is  1 – relative risk. 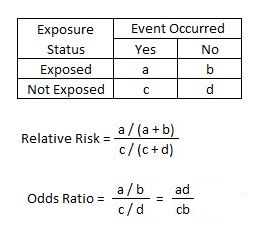