Puberty is the process of physical maturation where an adolescent reaches sexual maturity and becomes capable of reproduction. On average, puberty typically begins between 8 and 13 in females and 9 and 14 in males. Puberty is associated with emotional and hormonal changes, as well as physical changes such as breast development in females (thelarche), pubic hair development (pubarche), genital changes in males, voice changes, an increase in height, and the onset of menstruation (menarche). Puberty proceeds through five stages, termed Tanner stages, ranging from prepubertal, to full maturity.

In general, puberty follows a predictable pattern of onset and sequence. However, due to differences in each individual, including environment and genetics, puberty may proceed in a less-than-predictable way. Issues of concern related to puberty include, but are not limited to delayed puberty, precocious (early) puberty, contrasexual pubertal development, premature adrenarche (androgens causing early pubertal changes), premature thelarche in girls, and premature or delayed menarche.

Of specific concern to adolescent males is the appearance of enlarged breasts during puberty. Gynecomastia of puberty is a benign condition in males, characterized by the proliferation of glandular elements, which results in the enlargement of one or both breasts. During male puberty, there is often a short-lived imbalance between estrogen and testosterone, leading to gynecomastia. If the history and physical examination fall within normal limits, the gynecomastia usually resolves on its own by the age of 18, and only reassurance and monitoring are necessary.[1]

Puberty can also bring about emotional changes and stress to individuals as they come to terms with their changing bodies. Voice changes, wet dreams, involuntary erections, and noticeable physical changes such as breast enlargement, acne, widened hips, and growth spurts can cause adolescents to become worried and concerned about being different from their peers. While it is important to recognize the physiologic changes in puberty, it is also important to acknowledge the psychosocial and emotional changes that may occur at this time.

Gonadotropin-releasing hormone (GnRH) neurons of the hypothalamus control the initiation of puberty. The pulsatile secretion of GnRH by these neurons brings about the physiologic changes associated with puberty. Currently, there are increasing amounts of evidence showing that kisspeptin neurons in the arcuate nucleus release neurokinin B and dynorphin to generate the pulsatile secretion of GnRH.[2] GnRH causes the release of luteinizing hormone (LH) and follicle-stimulating hormone (FSH) from the gonadotropic cells of the anterior pituitary gland. FSH and LH affect the Leydig and Sertoli cells in the testes and the theca and granulosa cells of the ovary. The zona reticularis of the adrenal cortex produces the hormones responsible for adrenarche and function separately from the hypothalamic-pituitary-gonadal axis.[3]

Tanner staging is a classification system used to assess stages of puberty. A breakdown of each stage can be seen in Tables 1 and 2.

The growth spurt results from interactions between sex steroids (estradiol/testosterone), growth hormone, and IGF-1. The rise in sex steroids leads to an increase in growth hormone levels, which causes an increase in IGF-1. IGF-1 causes somatic growth via its metabolic actions (e.g., increases trabecular bone growth). Following the growth spurt in males, the larynx and vocal cords enlarge, and the boy's voice may 'crack' as it deepens in pitch.[7]

Adrenarche refers to the increased secretion of adrenal androgen precursors dehydroepiandrosterone (DHEA), dehydroepiandrosterone sulfate (DHEAS), and androstenedione from the adrenal zona reticularis, which typically occurs prior to puberty in children around the ages of 6-8 years. The eventual phenotypical result of adrenarche is pubarche, as well as apocrine odor, increased oiliness of hair and skin, and acne.[8]

The two major systems involved in puberty are the reproductive and endocrine systems. The hypothalamus, pituitary gland, adrenal glands, ovaries, and testes all produce hormones involved in the changes of puberty. However, these hormones produced during puberty affect nearly every system within the body, causing both internal and observable changes. The skeletal system changes, muscles grow, the circulatory and respiratory systems undergo rapid growth and development, and nervous system changes occur. During puberty, increases in estrogen and testosterone bind receptors in the limbic system, which stimulates the sex drive and increases emotional volatility and impulsivity.[9]

The primary function of puberty is to produce sexually mature adults capable of reproduction.

FSH and LH act on the gonads (ovaries and testicles) to stimulate the synthesis and release of sex steroid hormones (estrogen/progesterone and testosterone) and support gametogenesis (formation and development of oocytes/sperm). Sex steroids exert negative feedback on the hypothalamus and pituitary gland to ensure circulating levels remain stable. A rise in FSH stimulates an increase in estrogen synthesis and oogenesis in females and the onset of sperm production in males. A rise in LH stimulates an increase in progesterone production in females and an increase in testosterone production in males. Hormonal changes caused by rises in FSH and LH allow for the physical changes of puberty to begin. The first hormonal change showing puberty may be imminent is the appearance of pulsatile LH release during sleep. At the end of puberty, a difference between sleep and wake LH secretory patterns is not seen.[11]

Serum prolactin concentration increases during female puberty but remains relatively stable throughout male puberty. Insulin is essential for normal growth, and levels rise noticeably during puberty, with a strong positive correlation with IGF-1.

The first-line assessment for any child experiencing issues with pubertal development is a thorough history and physical exam. The history will allow the healthcare practitioner to gain insight into any possibility of a genetic cause and will provide vital information about the child’s growth pattern and development to date. It may also give clues to other causes of pubertal disorders such as poor nutrition, underlying disease, excessive exercise, or exogenous steroids. The physical exam should include examining the genitalia and the breasts in girls to determine Tanner staging. Tanner staging is a standard system used to categorize the different stages of pubertal development a child has achieved. For boys, Tanner staging includes testicular and penile growth, pubic hair distribution, and linear growth. In girls, Tanner staging includes breast development, pubic hair distribution, and linear growth. In addition to Tanner categorizations, examining the optic fundus and determining if the sense of smell is intact can be helpful. Standardized growth charts tracking the child’s growth over time are also useful in determining if a child is developing appropriately.[12]

Skin lesions noted on the physical exam can also point toward specific causes of abnormal puberty, such as McCune-Albright Syndrome. An X-ray of the left wrist is commonly used to determine bone age and whether the child’s bone maturation is more advanced than their age, suggesting they may be going through premature puberty. In addition to an x-ray of the left wrist, central nervous system (CNS) imaging may be performed if there are signs of CNS involvement. Measurement of hormone levels may also be helpful in the presence of abnormal puberty. Levels of estradiol, testosterone, FSH, and LH can be measured by checking for the presence of pubertal or prepubertal levels. A GnRH stimulation test is also helpful to determine a central or peripheral cause. This test involves administering 100 micrograms of GnRH after overnight fasting and observing FSH, LH, estradiol, and testosterone levels at 15, 30, 45, and 60 minutes post-injection. The stimulation test will cause activation of the hypothalamic-pituitary-gonadal axis in central causes resulting in increased levels of the hormones; a peripheral cause will not increase hormone levels.[13]

Additional testing may include thyroid hormone levels (TSH, T3, T4), blood glucose levels, a complete blood count, liver enzymes, and an erythrocyte sedimentation rate. A karyotype analysis may also be performed, which will show the patient’s chromosomal pattern and helps determine if there is a genetic cause, such as Turner syndrome or Klinefelter syndrome. Although the clinician may evaluate many other factors after a history and physical, the testing should be tailored individually for each child’s presentation and the most likely cause of their abnormal puberty.

The pathophysiology of puberty can be broken down into three main categories: premature (precocious) puberty, delayed puberty, and contrasexual development.

Precocious puberty, or early development of secondary sexual characteristics, is defined as the appearance of secondary sexual characteristics prior to the age of eight in girls or before the age of nine in boys. Precocious puberty can be broken down by pathological location into central or peripheral precocious puberty. Central precocious puberty (CPP) involves activation of the hypothalamic-pituitary-gonadal (HPG) axis, which leads to early but normal pubertal development. CPP is more common in girls, and while most cases are idiopathic, it can be caused by neoplasm, radiation, head trauma, or genetic conditions.[14] Peripheral precocious puberty (PPP) results from an increase in sex steroids that does not come from activation of the HPG axis. Findings in PPP patients typically include a rapid and atypically sequenced pubertal progression. The most notable causes of PPP include McCune-Albright syndrome and testotoxicosis.[15]

Causes of premature puberty unique to males include gonadotropin-secreting tumors and testotoxicosis.

Delayed puberty is the lack of physical evidence of puberty by 2 to 2.5 standard deviations above the mean age for the initiation of puberty. In boys, this is considered a period longer than four years between the first signs of testicular enlargement and the end of puberty or the absence of testicular growth by 14 years old. Delayed puberty in girls is considered the absence of breast growth by 13 years of age or more than four years between thelarche and menarche. The causes of delayed puberty include hypogonadotropic hypogonadism, hypergonadotropic hypogonadism, hypopituitarism, chromosomal abnormalities, and hypothalamic dysfunction due to secondary causes.[19]

Contrasexual development occurs when male or female children develop physical features of the opposite gender. This condition tends to be more common in girls and is commonly caused by polycystic ovaries and increased responses by the adrenal gland. Girls will have a male-like distribution of hair and may develop hirsutism. Girls can also develop clitoromegaly and lose the contour of the breast mass. Possible causes include Cushing syndrome, acromegaly, exogenous androgens, adrenal tumors, ovarian tumors, and hyperprolactinemia. Although contrasexual development is less common in boys, the cause is typically estrogen-secreting tumors when it does occur.[13]

Puberty is a highly significant process and a part of all children’s development into functional adults. During this time, children begin to gain the capacity for reproduction, which is essential to discuss with children as they progress through puberty. Discussion of safe sexual practices is an important aspect of well-child visits and is pertinent to identifying children with unsafe or high-risk sexual encounters. The discussion of sexuality by pediatricians or other medical caregivers with young teens as they progress into adulthood provides a chance for them to speak to someone under confidentiality and ask specific questions to understand better their sexuality as well as what is considered safe sexual practices.[21]

Puberty also coincides with a child’s psychosocial development. Children who may be early or behind in attaining puberty milestones, when compared to their peers, are at a much higher risk of emotional distress and low self-esteem. The ability to monitor the progression of puberty in the pediatric population is vital, as it is essential to their reproductive development and because of the many physical and psychological risks children face during this time in their development. 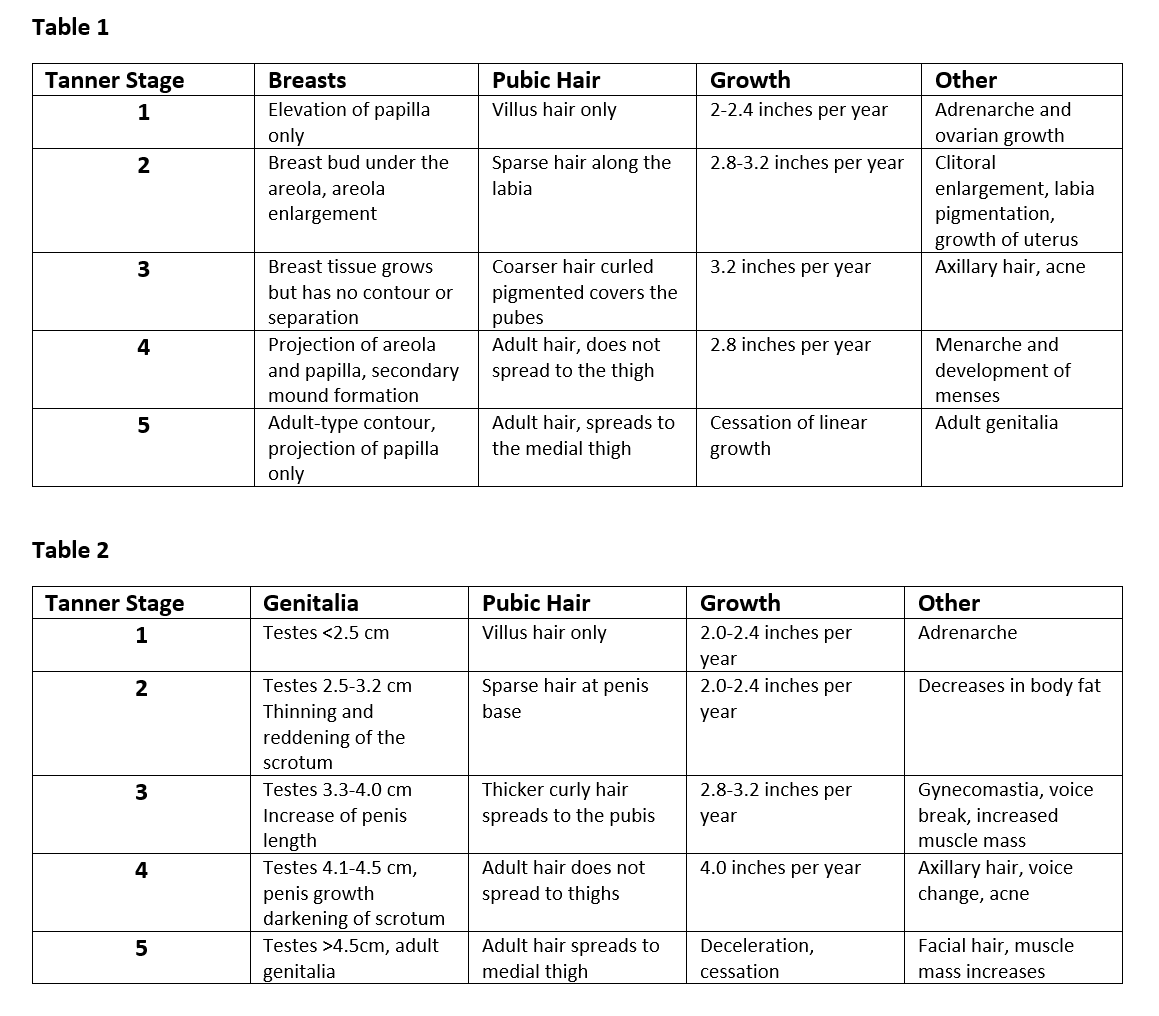