Shared psychotic disorder (folie à deux) is a rare disorder characterized by sharing a specific delusion among two or more people in a close relationship. The inducer (primary) who has a psychotic disorder with delusions influences another individual or more (induced, secondary) based on a delusional belief. It is commonly seen among two individuals, but in rare cases, can include larger groups. This activity outlines the presentation and management of shared psychotic disorder and highlights the role of the interprofessional team in improving the care of patients with this condition.

Shared psychotic disorder (folie à deux) is a rare disorder characterized by sharing a delusion among two or more people in a close relationship. The inducer (primary) who has a psychotic disorder with delusions influences another nonpsychotic individual or more (induced, secondary) based on a delusional belief. It is commonly seen among two individuals, but in rare cases, can include larger groups. For example, it can occur in a family and is called folie à famille.[1][2]

Jules Baillarger was the first to report this condition in 1860. During the 19th century, psychiatrists in Europe suggested different names. In France, it has been called "folie communiquee"(communicated psychosis) by Baillarger. In German psychiatry, it was named "Induziertes Irresein" by Lehman and Sharfetter. In 1877 Lasegue and Falret coined the term “folie à deux.” The French word “folie à deux" means madness shared by two. In the early 1940s, Gralnick, in his review of 103 cases of folie à deux, described four types of this disorder. He defined it as a psychiatric entity characterized by the transfer of delusions from one person to one or several others who have a close association with the primarily affected person. The four types are as follows:

This disorder was first listed in the Diagnostic and Statistical Manual of Mental Disorders, Third Edition (DSM-III) as shared paranoid disorder. In the next edition (DSM-IV), the term changed to shared psychotic disorder. In the latest edition, DSM-5, it was removed as a separate disease entity. It now is included in the section on other specified schizophrenia spectrum and other psychotic disorders. ICD-10 lists it as induced delusional disorder.[2]

The exact cause of shared psychotic disorder is still unknown. However, certain risk factors associated with it include the following:

The incidence and prevalence of shared psychotic disorder are difficult to estimate. However, some studies report that it is responsible for 1.7 to 2.6% of psychiatric hospital admissions.[8] This figure may, however, be underestimated as it is underdiagnosed and often missed in clinical practice. Psychiatrists may treat the primary while not being aware that the delusions exist in others.[9] Some authors even argue that the disorder is not rare.[3]

Shared psychotic disorder usually is chronic, and both the primary and secondary individuals share the original delusion(s). The shared delusion(s) occur under unique circumstances and can be of any type. The most common type of delusion is persecutory, followed by grandeur. There are racial variations. For example, in Japanese communities, persecutory delusions are the commonest followed by religious delusions.[4][10] There may be other psychiatric features such as social withdrawal, hallucinations, or suicidal thoughts.[11] Functionality is generally preserved compared with other disorders. There may be significant impairment in a particular aspect of life, especially when the delusions are not confronted.

The concept of the dominant-submissive relationship is derived from the psychodynamic theory. The role of the primary is rigid and possessing (dominant) while the submissive is less intelligent, passive, less resilient to suggestions, isolated, and/or physically handicapped. [6] Some authors have emphasized the existence of a role reversal between partners due to the complexity of the disorder.[7]

Presentation depends on the type of shared delusion. One partner usually faces a problem in society that involves the intervention of a psychiatrist. Often, this problem is supported or under the influence of the other partner. Both exhibit unrealistic, fixed, false beliefs which are unshakable. They might be paranoid, fearful, and suspicious of a neighbor or someone in their community. One might seek mental assessment after risky behavior, unreal claims, or recent assault. The secondary partner can be mistakenly referred and usually discovers that other people within their social sphere share the same belief as the primary. There can be under-treated or undiagnosed cases within the community that last for several years before being discovered. Sometimes partners who shared particular delusions can be admitted to the hospital together because of risky behavior or assault on themselves or others.

General description: The couples usually are groomed and well dressed.

Behavior: Defensive attitude or angry behavior can occur towards an interviewer who challenges the patient's delusion(s).

Speech: The patient's speech usually is coherent and relevant.

Thought: The form of thought is usually goal-oriented. The delusions are shared either entirely or partially; often are not bizarre in content; are systematically structured; overvalue social, cultural, or religious beliefs beyond the community norms; and can include homicidal or suicidal ideation.

Perceptions: They are less likely to express abnormal perceptions unless there are predisposing factors. Sometimes the secondary is the only person who experiences some form of hallucinations.

Orientation and Cognition: The patient is usually oriented to time, place, and person unless driven by their delusion. Memory and cognition generally are not affected.

Risks: It is crucial to evaluate the patient for suicidal or homicidal ideation and plans. If there is a history of aggression with an adverse outcome, then hospitalization should be considered.

Insight and Judgment: Most commonly, patients and their partners have no insight into their mental illness. Judgment is assessable by inquiring about past behavior and a future plan.[9][12][13]

As with any other psychiatric disorder, no specific labs are necessary for shared psychotic disorder. Most of the investigations, whether imaging or laboratory tests, should be considered to rule out any organic cause. A urine toxicology screen is vital to rule out any substance-induced disorder. If there are no organic or substance-induced disorders, a full psychiatric assessment should be next. It is helpful to ask for collateral history about both partners from a third person. It is common to take a history only from one of the partners because of strict social isolation, which can be very challenging. After taking a history, the psychiatrist should conduct a complete mental status examination. Collecting further details from other members of the family or friends should help in evaluating the patient. The primary partner can be defensive and misleading to encapsulate the delusion, concealing the symptoms for years.

Treatment should be tailored on a patient-by-patient basis. If there is an undertreated patient, efforts should be made to encourage increased adherence to the treatment plan. There have been suggestions that separation from the primary improves the condition significantly. After admission, the influence of the primary partner gradually disappears. However, it is worth noting that recent data suggest that separation by itself can be insufficient or may aggravate the condition.[3][14] Treating both partners with medication, whether alone (antipsychotics or antidepressant) or in combination (mood stabilizers and antipsychotics) and (antidepressants and antipsychotics), may help improve the condition.[3] Starting medication indicates that the patient's condition is severe and likely to express residual symptoms. It is critical to follow up with patients due to a possible alternative diagnosis. Psychotherapy can be offered to both partners either individually or as conjoined-psychotherapy.[7] Electroconvulsive therapy is an option.[3]

Formulating a differential diagnosis must include a history of the association between both partners. The onset of the condition usually precedes the onset of the shared delusion(s). The diagnosis of shared psychotic disorder should always be made only after ruling out any organic cause or substance-induced disorder.

If the delusions do not disappear when the partners are separated, it is important to reassess and consider an alternative diagnosis.

The prognosis of shared psychotic disorder is challenging to estimate, as it depends on multiple risk factors, including the primary's mental disorder and the secondary's biopsychosocial predisposing factors. Theoretically, children are more likely to benefit from separation than adults. Adherence to the management plan in both partners most likely will result in a better outcome than being untreated. An assessment of the nature and the duration of exposure to the delusion can provide clues to the potential outcomes of the disorder. Having premorbid personality features or predisposing risk factors can complicate the condition, leading one to consider an alternative diagnosis.[6]

These patients are not discovered easily due to a lack of insight. They are usually referred after a complication, namely acting on their delusions and jeopardizing their life or others. For example, a patient acts on their paranoid delusions via multiple accusations then commits an assault. Having delusions of grandeur or religious delusions also can be hazardous to others.[9]

Patients with shared psychotic disorder can go undiagnosed because only the primary partner is registered for treatment in a classic presentation. The level of tolerance and harmony among the two patients can add a significant challenge to the clinician in identifying each partner's role. Awareness of the nature of the dyad relationship dynamics is necessary. Most patients lack insight, which causes a substantial barrier to early discovery and management. The failure to adhere to treatment is an additional challenge to the clinician. A key aspect is understanding the impact of the delusions on both partners. A board-certified psychiatric pharmacist should work with the team to select the best agents for optimal therapeutic results with minimal adverse effects. A holistic approach that assesses and manages the biopsychosocial factors should help improve outcomes. The psychotherapist, mental health nurse, and psychiatrist should continue to follow these patients because relapse is common due to noncompliance with treatment. 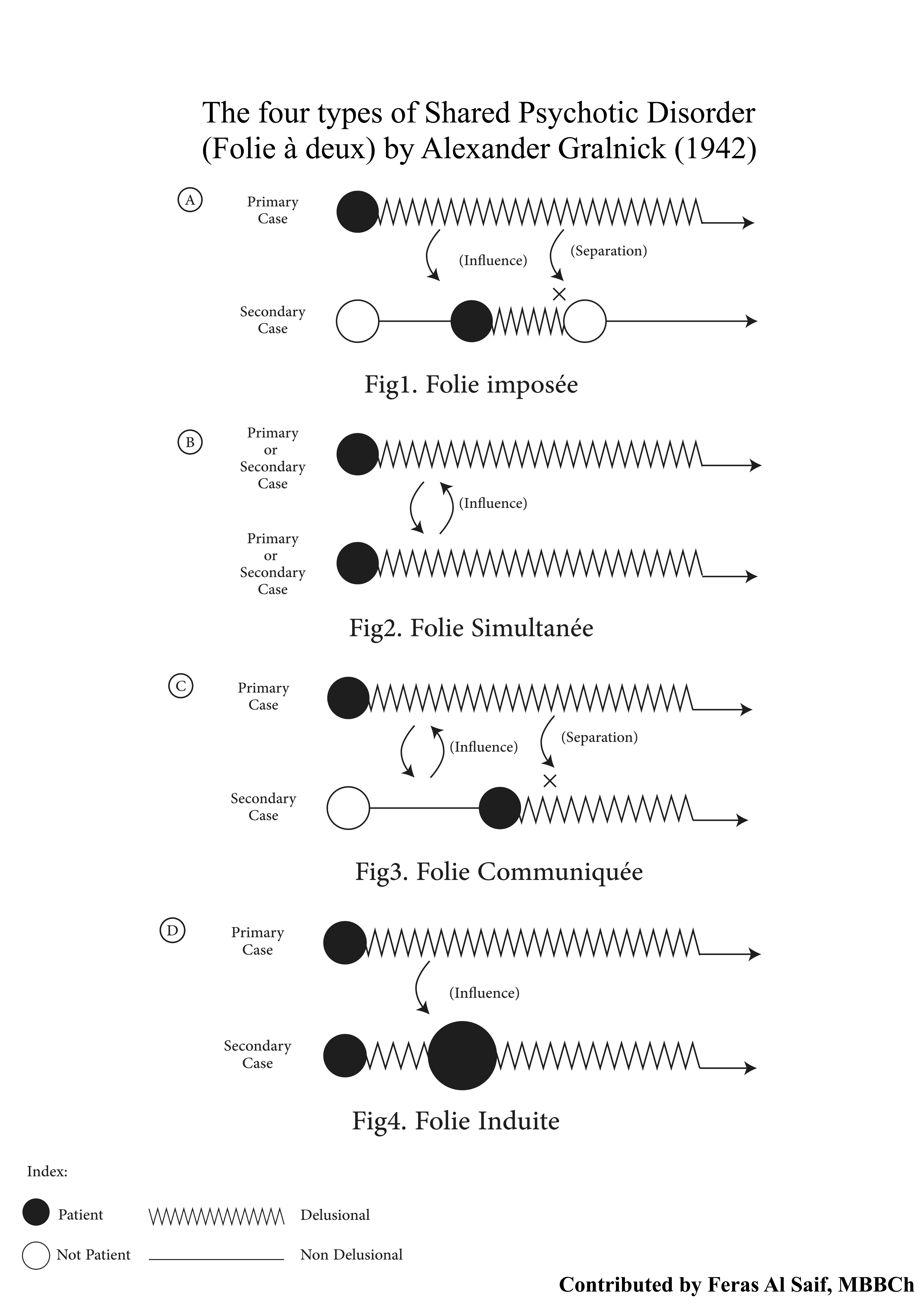 Joshi KG,Frierson RL,Gunter TD, Shared psychotic disorder and criminal responsibility: a review and case report of folie à trois. The journal of the American Academy of Psychiatry and the Law. 2006;     [PubMed PMID: 17185481]