Provocative discography is an invasive diagnostic spine procedure that involves the administration of contrast into the nucleus pulposus of an intervertebral disc to determine if the disc is the origin of a patient's chronic spine pain. The test is based on the premise that an intervertebral disc can be a source of spine pain, that the pain is experienced when the disc is mechanically loaded, and that therefore, similar pain will be experienced when the disc is pressurized with injected contrast. This activity reviews the indications, contraindications, and technique involved in performing provocative discography and highlights the role of the interprofessional team in the care of patients undergoing this procedure.

Provocative discography (PD) is an invasive diagnostic spine procedure that involves the administration of contrast into the nucleus pulposus of an intervertebral disc to determine if the disc is the origin of a patient’s chronic spine pain. The test is based on the premise that discs can be a source of spine pain, and symptomatic, internally disrupted disc causes pain when it is mechanically loaded; therefore, it should be similarly painful when pressurized with injected contrast.[1][2][3]

The intervertebral disc functions to distribute pressure evenly across the spinal segment while allowing for flexion, extension, and rotation.  The inner portion of the disc is called the nucleus pulposus. Since it is comprised mainly of a proteoglycan network and hydrated gel, it provides most of the shock-absorbing properties. The outer covering of the disc is the annulus fibrosis and is comprised of several layers of interwoven collagen that anchor the disc to the vertebral endplates and are oriented in such a way as to allow for reinforcement and rotational stresses. Fissures can form in the posterior and posterolateral segments of the annulus fibrosis that allow the nuclear material to extrude through. The outer third of the annulus, in particular, is richly innervated, and nuclear material may sensitize these nociceptors so that even relatively minor mechanical insults can be exquisitely painful.

Pain from a symptomatic lumbar disc is usually midline and often refers laterally across the back and/or into the buttocks and posterior thighs. Occasionally it may refer to the groin or below the knee. Typically, discogenic lower pain is reproduced or aggravated with prolonged sitting, forward flexion, transitioning from a sitting to a standing position, sit-ups, Valsalva maneuvers, and rotation while subjected to an axial load. Pain originating from a cervical or thoracic symptomatic disc is less well-defined regarding typical distribution and aggravating and relieving factors.

There are imaging findings on MRI that predict with fair sensitivity and specificity discogenic lower back pain. These are the presence of a high-intensity zone (synonymous with the extrusion of nuclear material) superimposed on a disc bulge, Modic changes greater than one-third of adjacent vertebral body height, and significant disorganization of the nucleus resulting in the appearance of a "dark disc" on T2 weighted images.[4][5][6]

PD should only be employed when there is a moderate to high pretest probability that the spine pain is suspected to be of discogenic origin. This is based on history and advanced imaging findings. The information obtained from the test will be used to rule out or plan subsequent treatment decisions such as therapeutic intradiscal procedures (e.g., intradiscal electrothermal therapy, annuloplasty, biacuplasty, regenerative medicine) or surgery (e.g., disc arthroplasty, interbody fusion).[7][8][9]

It is not indicated in the routine evaluation of nonspecific chronic spine pain when adequate conservative management has not yet been attempted in earnest, or in cases where intervertebral discs appear radiographically normal. Consideration should be given to withholding PD in patients with substantial psychosocial stressors or poorly controlled mood disorders as they may be at excessive risk of a false-positive result. The contraindications that apply to other invasive spine procedures apply equally to PD and include patient refusal, untreated infection, coagulopathy, and thrombocytopenia. Additionally, patients with an allergy to both iodinated and non-iodinated contrast are not candidates.

PD is performed in a procedural suite with x-ray fluoroscopy.  The patient is positioned prone (except in the case of cervical discography where they are supine). A chlorohexidine-based prep and occlusive drapes should be utilized. Intravenous antibiotics should be administered before skin puncture, or intradiscal antibiotics may be used, or both. The performing physician should perform a surgical scrub and don a sterile gown and double gloves, and not touch the distal portion of the needle that will be entering the disc. Only light sedation, if any, is preferred. This procedure can be performed under local anesthetic or by the additional administration of oral valium to help ensure that the patient is relatively comfortable but not heavily sedated since real-time accurate patient feedback is essential. Under fluoroscopic guidance, the nucleus pulposus of each disc to be tested is entered with the smallest gauge needle possible, typically a 22 or 25 gauge spinal needle. The discs are then sequentially pressurized with contrast, and the patient’s response to pressurization of each disc is noted. If pain reproduced is of adequate severity and similar in quality to the patient’s usual spine pain, the test is deemed concordant; however, if the pain produced is dissimilar to the patient's usual spine pain, the test is discordant. PD results are valid if all of the following criteria are satisfied: the patient is alert enough to relate information reliably, manometry is utilized for each disc tested, and a radiographically normal control disc does not produce concordant pain when pressurized. Some authors have advocated adding local anesthetic after the provocation portion to improve diagnostic accuracy, but the literature is conflicting. At the conclusion of the test, the patient may be sent for a post-procedure non-contrast CT scan which allows the evaluating physician to better appreciate disc morphology as compared to fluoroscopy alone.

Several decades have passed since the advent of PD.  Arguably it is the best method to determine with reasonable certainty the presence or absence of discogenic spine pain, yet its utilization has declined for several reasons.  First, PD is an invasive test and therefore carries risk, including the concern that the structural integrity of discs tested may be compromised leading to premature or more rapid degeneration.  Second, although PD is widely criticized for having unacceptably high false-positive rates, much of this controversy stems from earlier literature; a re-analysis of the data by members of the SIS found that in patients without a somatization disorder or prior back surgery the false positive rate per disc is in the mid-single digits, but only when performed with strict adherence to the published SIS guidelines.  Third, PD is unreliable in predicting spinal fusion outcomes when performed to relieve chronic spine pain.  It may, however, be unfair to judge the worthiness of a test by surgery with a known low-to-moderate success rate for this indication.  Finally, MRI has vastly improved the ability to define disc morphology, and some MRI findings such as the high-intensity zone and Modic changes correlate with the probability of discogenic lower back pain to some degree.

Provocative discography is often done by the orthopedic surgeon or the radiologist. While there are potential shortcomings to its use as a diagnostic tool, PD may still be the ideal test in the following situations.  First, when there is more than one abnormal intervertebral disc, particularly when several harbor findings on MRI that beg the question as to which might be the patient's primary pain generator; and second, when the next step in treatment holds the potential for significant morbidity such as with spinal fusion surgery, especially to determine if the disc adjacent to the proposed instrumented segment is painful or disrupted.

The primary care provider including the nurse practitioner should educate the patient on the limitations of the test. In some cases, imaging with MRI may be a better option as it is more revealing and certainly less painful. 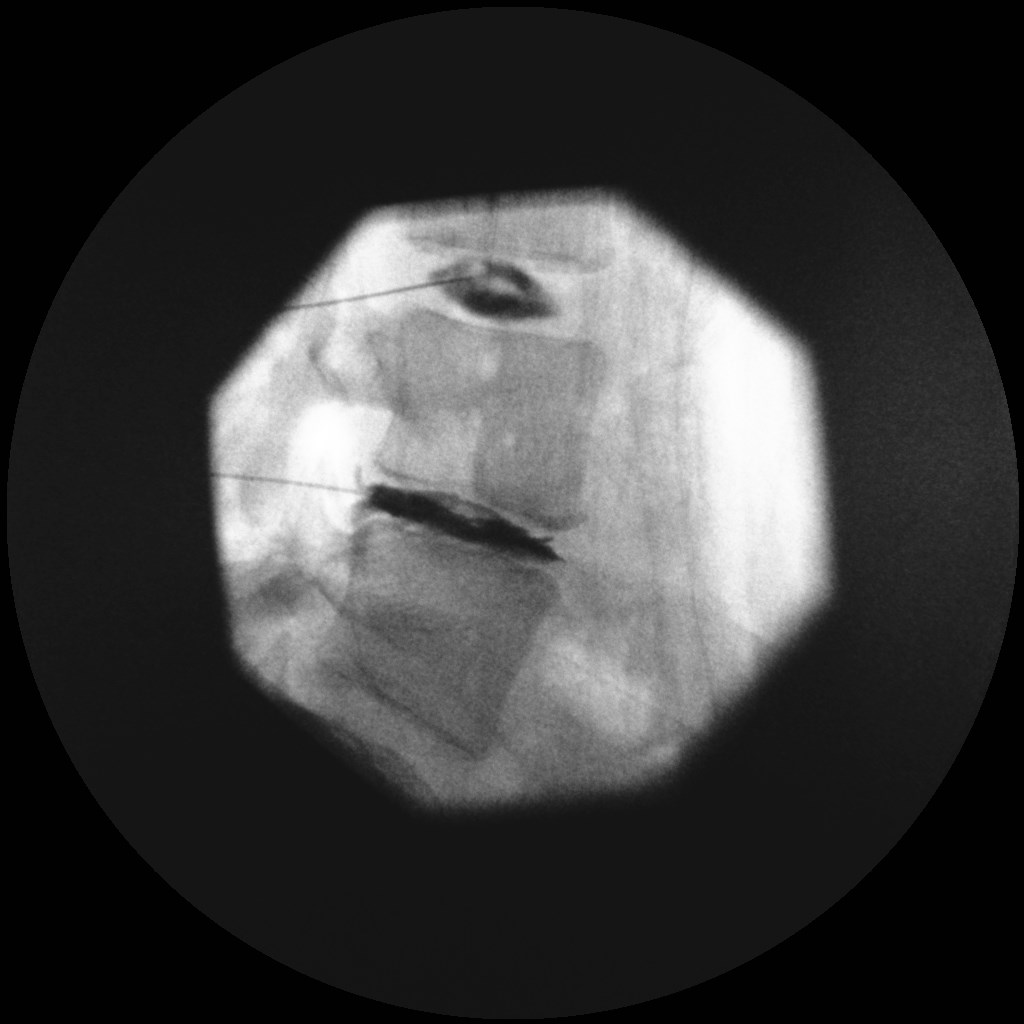 Provocative Discography, the L3-4 control disc appears lobular and was painless when pressurized, while the L4-5 disc had an irregular (fissured) appearance that produced concordant pain when subjected to relatively low pressures
Contributed by Kevin B. Guthmiller