There is no uniformly accepted definition for prosthetic joint infection. The presentation is often varied, and the classical features of infection, such as fever, leukocytosis, and other typical signs of sepsis, are often absent. A prosthesis is a foreign body, and its presence alone is a risk factor for infection. Also, the microorganism load that will produce an established infection in a prosthetic joint is often less compared to a native joint.

The strongest factor that defines prosthetic joint infection is perhaps the recovery of a microorganism from a joint aspirate or surgically obtained peri-prosthetic material. Other factors that support prosthetic joint infection include the presence of a sinus tract communicating with the joint space, wound dehiscence, purulence around the joint without an alternative explanation, loosening of the prosthesis, elevated synovial fluid leukocyte count with neutrophil predominance, and elevated inflammatory markers. However, failure to identify a pathogen does not rule out infection.[1][2]

The implicated pathogens of prosthetic joint infection are best categorized into three groups based on when they are likely to be isolated from culture materials in relation to the duration of the implant.[6][7]

Early infection, which is within the first four weeks after the primary procedure. This is typically caused by highly virulent organisms including Staphylococcus aureus, aerobic gram-negative Bacilli, beta-hemolytic Streptococcus, and enterococci.

Delayed infection, from 3 months to 1 year, is typically caused by low virulent organisms including coagulase-negative Staphylococcus, Propionibacterium acnes, and Enterococci. To a lesser extent, S. aureus may also be implicated.

Late infection (over one year; some authors use over 2 years) are typically hematogenous and often caused by Staphylococcus aureus, coagulase-negative Staphylococcus, viridans streptococcus, Enterococci, and occasionally gram-negative bacilli. See figure.

In summary, Staphylococci account for more than 50% of total prosthetic joint infections. Approximately 20% may be polymicrobial, 15% caused by gram-negative, and about 10% are culture negative.[8][9]

Currently, in the United States, physicians perform about one million total hip and knee arthroplasties, but this number is expected to quadruple over the next one to two decades. With an increasing number of surgeries, it is expected there will be more infections. The current rate of prosthetic joint infection varies from one center to another but typically range between 0.5% to 1.0% for hip and shoulder replacements, and 0.5% to 2% for knee replacements [10][11].

Infection rates are higher in the first 2 years compared to after two years following surgery. This is due to the periprosthetic tissue being highly vascular which makes it susceptible to high risk of hematogenous spread in the early years after the primary procedure [12].

The Risk Factors for Infection Include

Postoperative factors: such as the development of a hematoma, seroma, and wound dehiscence.

Underlying the pathogenesis of prosthetic joint infection is the simple fact that prostheses are foreign bodies and they can promote the formation of biofilm by several notable organisms. These organisms form communities in a hydrated polymeric matrix on implant surfaces and necrotic tissues. These bacterial aggregates with their inherent resistance to antimicrobial agents are the main culprit for prosthetic joint infection [13]. Biofilm is a thin film of microorganism-embedded glycocalyx (exopolysaccharides) which often coats the surface of the prosthesis and creates a barrier against antimicrobial agents. Also, certain forms of Staphylococcus aureus, a notable player in prosthetic joint infections may form small colony variants that often grow slowly and are associated with recurrent and difficult-to-treat infections. It takes four weeks for maturation of biofilms [14]. Sources of infection are:

Direct spread through a route communicating the prosthesis and the outer environment e.g Sinus tract or open periprosthetic fracture.

Local spread from a nearby septic focus e.g  osteomyelitis or soft tissue infection.

The presentation can be early, delayed, or late as outlined previously. Virulent pathogens typically cause early infections, most of which are acquired around the time of surgery and usually present acutely with swelling, erythema, induration at the incision site, and wound drainage. Delayed infections may also be acquired around the time of surgery, but low virulent organisms typically cause them. Late infections, however, are mostly hematogenous and often without fever, draining wounds, or local signs of infection. Overall, symptoms are very non-specific, and most patients present with joint swelling or persistent pain that worsens progressively. Other common clinical presentations include wound dehiscence, purulence around the prosthesis, sinus tract communicating with the joint cavity, joint instability, and ambulation difficulties.

Imaging may have some role in diagnosis, but it is mostly complimentary.

Plain Radiographs are the most important study. Even though overall sensitivity and specificity are low, plain imaging may provide useful clues about joint effusion, joint alignment, bone-cement or metal bone interface lucencies, periosteal reactions, and patchy osteolysis.[17] In addition, it might show bone resorption surrounding the implant or transcortical sinus tracts [18][19].[18]

Physicians seldom order CT and MRI scans, but when requested, the scans may show bony erosion, abscess, sinus tract, or loosening of the prosthesis.

Technetium bone scans there are variable modalities that are indicated when an infection is suspected clinically but can not be confirmed by arthrocentesis or lab analysis. Although it has low specificity of 30-40 %, it is highly sensitive to up to 99%. The modalities available are Tc-99m (technetium) which can reveal inflammation and In-111 (indium) that reveal leukocyte. In addition, a triple scan can differentiate infection from fracture or bone remodeling.

The updated version of the Musculoskeletal Infection Society (MSIS) 2018 criteria for prosthetic joint infections are evidence-based and validated criteria [21]:

Diagnosis can be made if one major criterion is present. Either a sinus tract or two positive cultures with phenotypically identical organisms.

Cobmined with the preoperative score a combined score of 6 or more was considered infected, whilst a score between 4 and 5 was inconclusive, and a score of 3 or less was not infected [21].

Antibiotic therapy is often necessary but should be delayed until after culture materials (at least joint aspiration culture) are obtained. The exception is in the rare situation of sepsis or overwhelming infection. Empirical antibiotic therapy should be tailored according to the timing of infection. As a general guide, the antibiotic choice should at least provide adequate coverage against Staphylococcus aureus (including methicillin-resistant Staphylococcus aureus (MRSA)), coagulase-negative staphylococcus, and aerobic gram-negative bacilli. Antibiotics with excellent activity against biofilms such as Rifampin and fluoroquinolones are often included in treatment. Other possible oral antibiotic choices for prosthetic joint infection include minocycline, linezolid, and trimethoprim-sulfamethoxazole.[23][24][25]

Surgical options can be further categorized into five options as follow:

Debridement and retention: As the name implies, the implant is left in place, but the joint cavity is debrided with or without removal of the synovial polyethylene lining. This is typically the surgical approach for early prosthetic joint infection provided the implant is stable, symptom duration is less than 3 weeks, there are no sinus tracts, and the isolated pathogen is susceptible to active biofilm antibiotics. The other indication would be an acute hematogenous infection with symptoms duration of fewer than 72 hours. Prolonged antibiotics for 3 to 6 months are often necessary (three months for retained hip and 6 months for retained knee joint).

One-stage exchange: This is the surgical approach commonly employed in Europe but not the standard of care in the United States. It involves the removal of the infected prosthesis and simultaneously replaced with a new one. This is indicated when the patient is not immunocompromised with minimal medical comorbidities and soft tissues are healthy. there should be no prolonged use of antibiotics and no bone grafts implanted. The organism has to be of low virulence with known antibiotic sensitivity preoperatively. It is often accompanied by two weeks of intravenous antibiotics followed by 3 to 6 months of oral antibiotics. This approach has the advantage of being of lower cost, shortened hospital stay, and patient's immobilization. But, this is at the expense of carrying a high risk of residual infection.

Two-stage exchange: This is the standard of care in the United States and offers the best chance of cure especially for delayed and late prosthetic joint infections. In its simplified version, it involves complete removal of the infected prosthesis, placement of a joint spacer (which could be antibiotic-impregnated), antibiotic therapy for two to eight weeks, and subsequent placement of a new prosthesis. Patients have to be fit enough to afford multiple procedures and have adequate bone stock. The decision on reimplantation requires confirmation by clinical examination, normal lab analysis, and negative cultures 2 weeks after the completed antibiotic course.

Resection Arthroplasty (Implant removal without replacement): This is a reasonable approach for elderly, non ambulatory patients with high operative risks or when there is no functional benefit expected by prosthesis exchange. Other indications would be inadequate bone stock and poor soft tissues, recurrent infections,  multiple previous failed revision surgeries. Arthrodesis often accompanies it.

Chronic Suppressive antibiotic therapy: This is often employed when surgery is not an option, for example, bedridden debilitated patients or those with multiple severe co-morbidities.

A missed prosthetic joint infection or one that is not treated appropriately can result in persistence of infection with deletarious consequences including disability and impaired quality of life.

The management of a prosthetic joint infection is best done with an interprofessional team consisting of an orthopedic surgeon, infectious disease expert, rehabilitation specialist, nurse and pharmacist. These patients are often left bedridden for long periods, and hence a physical therapy consult is recommended for joint movement and muscle training. A dietary consult may help prevent muscle wasting, and the nurse should ensure that the patient has prophylaxis against deep vein thrombosis and pressure ulcers. The pharmacist should check up on cultures and make sure that the patient is on the right antibiotics. After discharge, most patients need active physical therapy for months to regain joint motion and muscle strength.[26][27][28] (Level V)

There are no large randomized clinical trials on prosthetic joint infections and outcomes are based on small retrospective case series and case reports. The success of the different procedures varies from 0-100%, depending on the severity of the infection, time of treatment, patient co-morbidity and duration of infection. The difficulty in dealing with prosthetic joint infections is whether to remove all the hardware but this also leaves the patient with a disability. Use of spacers has been useful, but it is not the answer to all type of prosthetic joint infections. Overall, good results have been obtained with delayed exchange arthroplasty with success rates ranging from 40-80%. Unfortunately, the majority of patients do have some degree of pain, joint instability and limited use of the joint after an infection.[29][24][30] (Level 5) 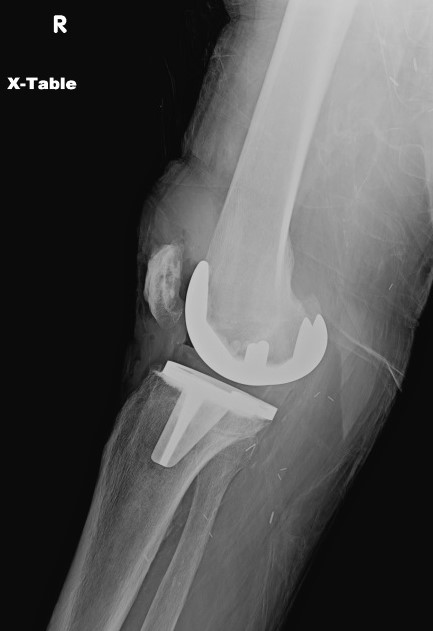 Plain radiograph of the right knee in a 78 year old man with prosthetic joint infection 10 years after initial surgery. The route of infection is most likely hematogenous.
Contributed by Folusakin Ayoade