Proctitis and anusitis may happen secondary to ulcerative colitis (UC), Chronic Radiation Proctitis, Proctopathy (CRP), or Diversion Proctitis (DP). Infectious causes include Clostridium difficile, enteric infections (Campylobacter, Shigella, Escherichia coli, Salmonella, and amebiasis), and STI’s (Gonorrhea, Chlamydia, Syphilis, HSV, Lymphogranuloma venereum, chancroid, CMV, HPV).[1] Other causes include ischemia, vasculitis, toxins as hydrogen peroxide enemas or medication side effects. The most common cause of anusitis is diet, as with excess citrus, coffee, cola, beer, garlic, spices, and sauces. Diarrhea noted after intake of laxatives as in preparation for colonoscopy is noted to cause anusitis and stress may be another etiologic factor.

Gonococcal and chlamydial proctitis and anusitis occur predominantly in young adults. Incidence is more in males than females. Gonococcal proctitis is most common in individuals younger than 25 years. Among men who have sex with men (MSM), prevalence rates of rectal chlamydia and rectal gonorrhea are 9% and 5% respectively. People of Jewish descent are 3-5 times more likely to develop UC and more than 30% of patients with UC have isolated rectal involvement. In children diagnosed with UC, 25% will only have ulcerative proctitis (UP). Girls are two times more likely to have UP than boys. Acute radiation proctitis and anusitis occur in the majority of patients, but are self-limited and last up to three months after the start of radiotherapy. CRP prevalence ranges from 2% to 20% and onset ranges from eight to 13 months but can occur many years after radiation exposure. DP onset is usually from three to 36 months after fecal diversion, and less than 50% of patients are symptomatic.

In genetically predisposed individuals with dysregulated immune responses, GI infections may increase the risk of ulcerative proctitis (UP). Appendectomy and smoking appeared to act as protective factors from UP. CRP occurs secondary to ischemic and fibrotic changes. In the case of DP, proximal fecal diversion causes increased nitrate-reducing bacteria and decreased obligate anaerobes resulting in short-chain fatty acids deficiency. Rectal intercourse in women or MSM can result in proctocolitis. Radiation injury occurs with doses 8 Gy or higher causing damage to intestinal cell DNA with helical breaks and inability to replicate and undergo normal cellular repair.

Initial tests include anal examination or anoscopy for Gram-stained smear of anorectal exudates to check for polymorphonuclear leukocytes. Stool culture is used for E. coli O157:H7, Salmonella, Shigella, and amebiasis. Serological markers (p-ANCA, and ASCA) have low sensitivity in UP. STD testing include nucleic acid amplification test (NAAT) for Chlamydia trachomatis and NAAT or culture for Neisseria gonorrhoeae. Polymerase chain reaction (PCR) is used to test HSV, LGV and C difficile toxin in stool. ELISA is used to test HIV, and darkfield and serologic testing are used for T. pallidum. STD-related proctitis indicates sexual abuse if found in infants or children. Diagnostic procedures include anoscopy, proctosigmoidoscopy and biopsy if there is suspicion for IBD. In CRP, endoscopic biopsies should be taken from the postero-lateral walls due to concerns about fistula formation.

When the presentation is consistent with acute proctitis in patients with receptive anal intercourse, therapy should be initiated while awaiting results of laboratory tests. Partners of patients with STI’s should be evaluated and patients should refrain from sexual intercourse until they are treated. Gonococcal proctitis is treated with ceftriaxone 250 mg intramuscular one time plus azithromycin 1 gram oral one time. An alternative regimen is cefixime 400 mg oral one time plus doxycycline 100 mg oral twice daily for seven days. Chlamydia is treated with azithromycin. Doxycycline, erythromycin, ofloxacin or Levofloxacin may be used as an alternative regimen. LGV is treated with doxycycline 100 mg twice daily for 21 days. Erythromycin or azithromycin may be used as alternative regimens for the same period of 21 days. Herpes proctitis is treated with acyclovir 400 mg oral three times daily or valacyclovir 1 gram twice daily or famciclovir 250 mg three times daily for 7 to 10 days. The course of treatment may be extended if no complete healing is achieved by the end of the 10-day course of treatment.[2][3]

For patients with mild to moderate UP, guidelines from American College of Gastroenterology (ACG) and American Gastroenterological Association (AGA) recommend using rectal 5-Aminosalicylic Acid (5-ASA) mesalamine rather than oral mesalamine. Suppositories are more effective than enemas. For induction of remission, the dose is 1 g/day and this is to be continued at the same dose to maintain remission.  In cases of intolerance, refractoriness, hypersensitivity to mesalamine suppositories, inability to retain rectal therapy, rectal corticosteroid therapy is suggested for induction of remission rather than no therapy, despite the superiority of rectal 5-ASA over rectal steroids.  Corticosteroids are not recommended and are not effective in maintenance of remission secondary to side effects and long-term complications. Up to 46% of patients with UP may develop extensive colitis. This should be especially suspected in patients refractory to topical treatment and follow-up is recommended.[4][5]

UP is treated with topical mesalazine in the form of suppositories, enemas, foams and gels and in severe cases combined with oral mesalazine with topical steroids or systemic corticosteroids in more severe cases. In steroid resistant cases, the addition of cyclosporine or immunomodulators; thiopurines as azathioprine (AZA) and 6-mercaptopurine (6-MP) is considered. Other options include anti TNF-α (infliximab, adalimumab, and golimumab), anti-integrin antibodies as vedolizumab and etrolizumab, or oral tacrolimus.[6][7]

Patient monitoring includes HCV screening which should be performed at least annually and more frequently depending on specific circumstances including STD-related proctitis. In chlamydial or gonococcal proctitis, retesting for the respective pathogen should be performed three months after treatment. Counsel about safe sex practices, including condom use during every sexual encounter is important. CRP is rarely curable.

Proctitis and anusitis are best managed by an interprofessional team including nurses. There are many causes of proctitis and anusitis and it is important to determine the primary cause for the treatment to be effective. One should not alway assume that the cause if IBD, many infectious disorders can present in a similar fashion.

For infectious causes, the outlook is good with treatment, but with IBD, recurrences are well known and significantly affect the quality of life. 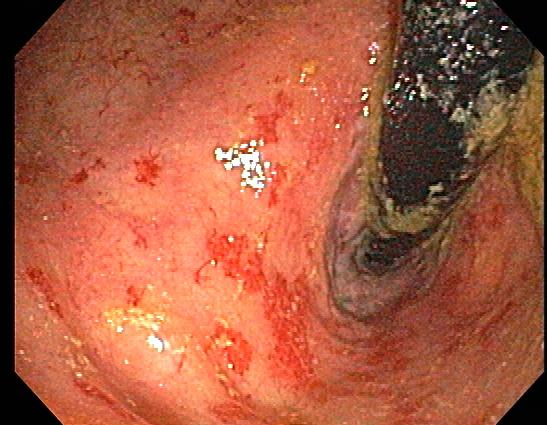