Prism glasses are lenses which deflect light and therefore, can correct some ophthalmic conditions most notably ocular misalignment.

In optics, a prism is a device that uses refraction to change the direction of light. In nearly all applications, the refractive index of a prism (e.g. 1.49 for plastic) is higher than that of the medium it exists in (e.g. 1.00 for air). Therefore Snell’s law of refraction dictates that the light is bent toward the base of the prism. This light deflection is the sum of the deflection at both interfaces, or sides, of the prism. The more light is bent, the more power a prism is said to have. Prism power is measured in prism diopter which is defined as the amount of light deflection in cm at a distance of 100 cm. For example, since a 45-degree angle is formed when light is deflected 100 cm away over a distance of 100 cm, 100 prism diopters correspond to 45 degrees.[1]

The amount of deflection depends on both the refractive index of the material and the position the prism is held in. With a higher refractive index, glass prisms deflect light more than plastic prisms and are more prone to error.[2] The position of minimum deviation is such that the angle of light incident on the prism equals the angle of light exiting the prism. Rotating a prism in either direction from this position increases its effective power.[3]

Since prism power is due to refraction, the frequency of the light influences the amount of deflection from a prism. Higher frequency blue light gets refracted more than lower frequency red light; therefore, a prism will bend blue light more than red light. This fact can be exploited to allow for white light to be separated into its constituent colors by a prism.

The position of least deviation is the most forgiving position. Since a prism mistakenly held outside the position of minimum deviation will have more effective power, any errors in holding a plastic prism results in falsely low measurements. Meanwhile, an error in holding a glass prism in Prentice Position could result in falsely high or falsely lower readings depending on which way the prism was out of position. Glass prisms are less frequently used.

Spherocylindrical lenses such as glasses and bifocals have prismatic power when looking outside the optical center. When observing a high myope, the side of their face can often appear shifted and directly behind their lens to an observer. This is an important consideration in diplopia induced by bifocals, especially in cases of anisometropia. In such cases of anisometropia, the prism can be added or removed from a portion of the lens to cancel out the prismatic power of looking outside the optical center. This is referred to as slab off or reverse slab off.

Glasses with prism power are often used to treat misalignment, convergence insufficiency, nystagmus, and (with the use of a prism in only the periphery) hemianopia[4]. A practitioner can measure the misalignment and treat it with a prism. Given the cost of glasses, often a trial with a series of parallel press-on prisms known as Fresnel prisms is advised. These prisms allow a patient to determine if symptoms are improved. Given the optical imperfections of the Fresnel press on prisms, there tends to be reduced image quality, and patients should receive a warning regarding this fact.

Prismatic power can be ground into a new pair of glasses for superior image quality. Prism should be written in prism diopters along an axis with the direction of the base specified. For example, to correct a five prism diopter hypertropia, one would write for five prism diopters of the base down prism over the hyperopic eye. Since alignment is a binocular issue, the prism can also be split and placed in front of each eye. Once the required prism is over ten diopters, referral to a strabismus surgeon should be a consideration.

Finally, in nystagmus, there often exists a point of minimization of the nystagmus called the null point, which often results in patients adopting a head turn. If the null point is in eccentric gaze, prisms can be used to shift the null point to a primary gaze to allow for a lessened head turn. However, the amount of prism necessary is often too high for this to be practically useful. This same limitation is also a problem is using prisms to shift the visual field in homonymous hemianopia or hemispatial neglect.

While there exist many other uses of the prism in non-ophthalmic applications, the relevance to ophthalmology is our focus here. In summary, the proper use of prisms in ophthalmology can facilitate diagnosis and treatment. 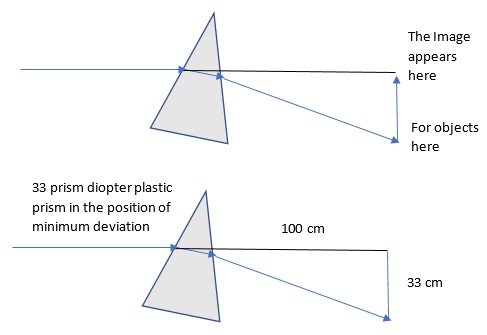