Clinically, prevalence is most commonly described as the percentage with the disease in the population at risk.   We commonly hear this in everyday discussion, and most find these references intuitive to interpret, such as "currently, X% of Americans were overweight or obese."

Alternatively, if the disease process tends to last a long time and both the incidence and cure/death rates are relatively stable then prevalence can be calculated based on the incidence and duration of disease.

Let us use an example to examine and clarify prevalence.

You talk to all 200 people in your town on a spring day and find 60 of them have allergy symptoms.  The point prevalence of allergies in your town would be 30% or 3 in 10 individuals calculated as:

As stated previously, we can use the incidence and disease duration to calculate prevalence if both are relatively constant.

It should be stressed that the second method is only valid if both the incidence and surival/disease duration are relatively constant.

Prevalence is also not static among different groups.  We will take two different examples, osteosarcoma and essential hypertension, and compare their prevalence stratified by age group.  Osteosarcoma tends to occur in the pediatric age group and has a second incidence peak in the elderly.  Osteosarcoma has approximately a 20% 10-year survival rate. Thus a pediatric patient diagnosed with osteosarcoma will likely no longer be alive in 10 years.  If there are few new cases in teenagers and adults, the prevalence will decrease as more individuals leave the disease group (by death or cure) than new cases are diagnosed.  Later in life, there is the second incidence peak where senior citizens start developing osteosarcoma at increasing rates.  This will add new cases to the osteosarcoma group, and thus the prevalence will increase in senior citizens corresponding to this second peak in incidence.

For a mathematical explanation of this phenomenon, we can calculate the positive predictive value (PPV) as follows:

Similarly we can write the negative predictive value (NPV) as follows: 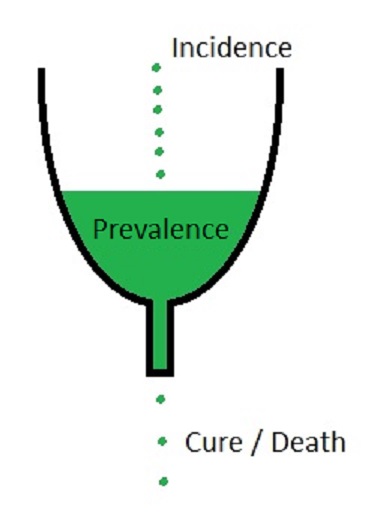