There are three order neurons involved in this pathway that orchestrate signal transmission from the skin and joints to the cerebral cortex. The cell body of the dorsal root ganglia, which is composed of pseudounipolar neurons, characterizes the first-order neuron of the pathway. The pseudounipolar neurons contain peripheral (distal) and central (proximal) axonal processes. The peripheral (distal) axons receive various signal input from the skin via the receptors associated with the dorsal column medial lemniscus pathway. These receptors classify as two types: tactile mechanoreceptors and conscious proprioception.

Tactile mechanoreceptors include Meissner's corpuscles, which are concerned with a fine touch and two-point discrimination and free nerve endings on hair follicles, which is concerned with a fine touch, and lastly, Pacinian corpuscles which deal with pressure sense and vibration sense. Whereas, conscious proprioception include muscle spindles Golgi tendon organs which detect muscle length and contraction changes contributing to fine motor control and axial position information to the nervous system.[1][2][3]

After receiving the sensory input from the periphery via the mechanoreceptor and conscious receptors, the central (proximal) axons of the dorsal root ganglia enter the spinal cord through the medial dorsal root entry zone. Once in the spinal cord, the central axonal process gives off small collateral branches that will terminate in the spinal gray matter to facilitate spinal reflexes. The majority of the central axonal process, however, will leave the dorsal horn gray matter without synapsing and enter the dorsal funiculus to help constitute either the fasciculus gracilis or the fasciculus cuneatus. Fasciculus gracilis carries sensory information associated with the DCML pathway from the lower extremities and terminates and synapses at the nucleus gracilis in the caudal medulla. It is located medial relative to the fasciculus cuneatus and travels all along the spinal cord.

The medial lemniscus terminates and synapses in the thalamus particularly, in the ventral posterolateral (VPL) nucleus of the thalamus with the preservation of the somatotopy. VPL neurons are third-order neurons of the pathway, and its axons will project laterally out of the thalamus and course somatotopically through the posterior limb of the internal capsule and then terminating in the primary somatosensory cortex of the postcentral gyrus. The tracts of DCML pathway starting from the fasciculus gracilis and fasciculus cuneatus all way to the primary somatosensory cortex have a preserved somatotopic arrangement where the cervical axons are medial and sacral axons are lateral. This somatotopic arrangement resembles that of the motor cortical spinal tract and differs from the spinothalamic tract.

The primary function of the posterior column pathway is to convey sensory information regarding fine touch, two-point discrimination, conscious proprioception, and vibration sensations from our skin and joints, excluding the head to the postcentral gyrus in the cerebral cortex.[4][5][6][7][8]

The aorta is an integral part of supplying blood to the spinal cord. The aorta does this by giving rise to the subclavian arteries, which give rise posteriorly to the vertebral arteries. It is from these vertebral arteries that the medullary arteries arise. The medullary arteries branch into ten segments and provide the majority of vascularization for the spinal cord. If there is any compromise to the blood flow, the resulting neurological damage will depend on where the compromise occurs. Any damage to the posterior flow of blood will likely result in some degree of sensory deficits, while any damage to the anterior supply of blood will likely result in some degree of motor deficits. The posterior spinal artery supplies the posterior column pathway. Thus, an infraction of the posterior spinal artery leads to neurological sensory deficits related to the posterior column pathway. This condition occurs in the case of posterior cord syndrome, also known as posterior spinal artery syndrome.

A case report in the Journal of Neurosurgery highlights the significance of surgical interruption of a midline dorsal column (posterior column pathway) to decrease visceral pain that persisted in the pelvis after the elimination of uterine cancer. The case showed that punctate midline myelotomy is superior to analgesic medication in eliminating persistent visceral pain. Midline myelotomy has been typically used to interrupt the pain transmitted via the spinothalamic tract, but the punctate midline myelotomy used in the study was different in that the dorsal column pathway was intentionally the target. The results shed light on the involvement of the posterior column pathway in visceral pain transmission and on the future possibility of eliminating pain with surgical intervention in the posterior column rather than by taking analgesic medications.[9]

Another example of a degenerative disease affecting the posterior column pathway is subacute combined degeneration of the spinal cord. Unlike tabes dorsalis, which is a late complication of an infectious process, subacute combined degeneration of the spinal cord (SCD) results from B12 deficiency. SCD affects two pathways in the spinal cords: lateral cortical motor pathway and posterior column pathway, causing symptoms related to the functions of these two pathways. SCD is characterized by axonal myelin abnormalities in the mentioned pathways as a result of B12 deficiency, leading to a compromise in nerve transmission. Myelination of the axons speeds up the action potential via the saltatory conduction. Thus, disruption in the myelination process slows down nerve conduction. Symptoms related to the posterior column pathway include paresthesias, loss of vibratory sensation, and proprioception, while symptoms associated with the lateral cortical motor pathway include spastic paresis and hyperreflexia. The role of vitamin B12 deficiency in the cause of SCD is related to the production of myelin in two pathways.

In a different pathway, the lack of Vitamin B12 impedes oligodendrocytes growth, as vitamin B12 is involved in the DNA synthesis is a cofactor in the generation of tetrahydrofolate. Other Vitamin B12 deficiency findings besides SCD include psychiatric issues and macrocytic anemia. Vitamin B12 deficiency commonly causes pernicious anemia, but it can also be secondary to folate deficiency, methotrexate therapy, and nitric oxide intake.[10] 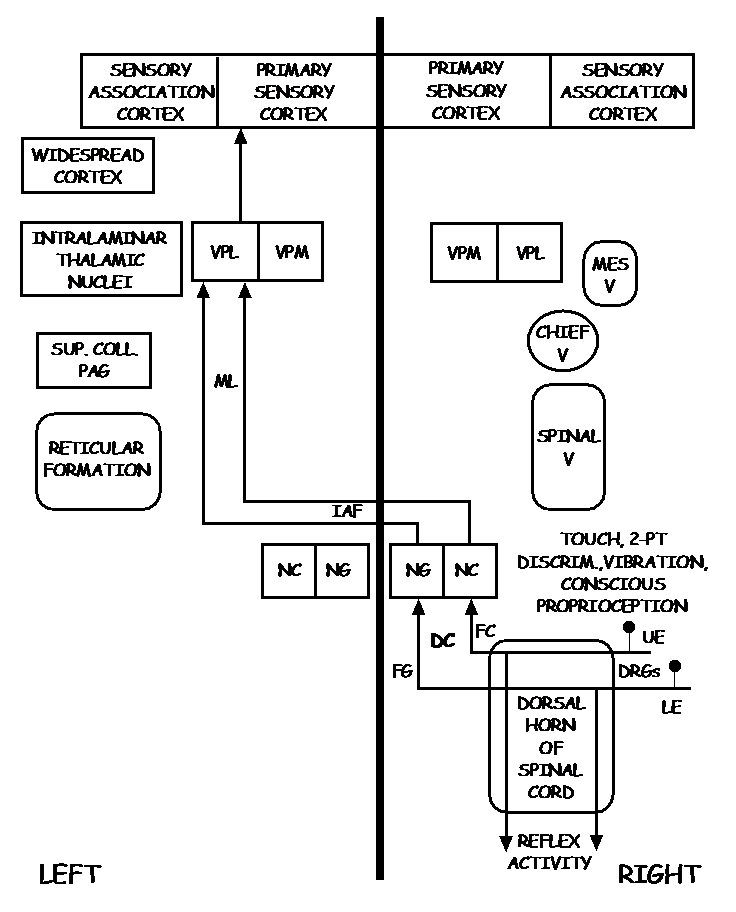 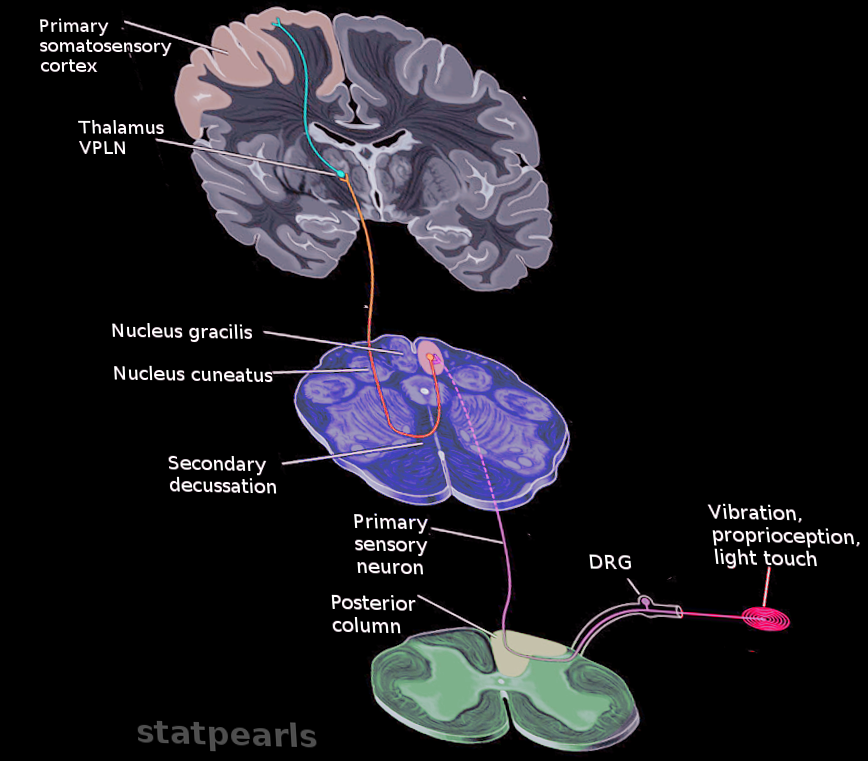 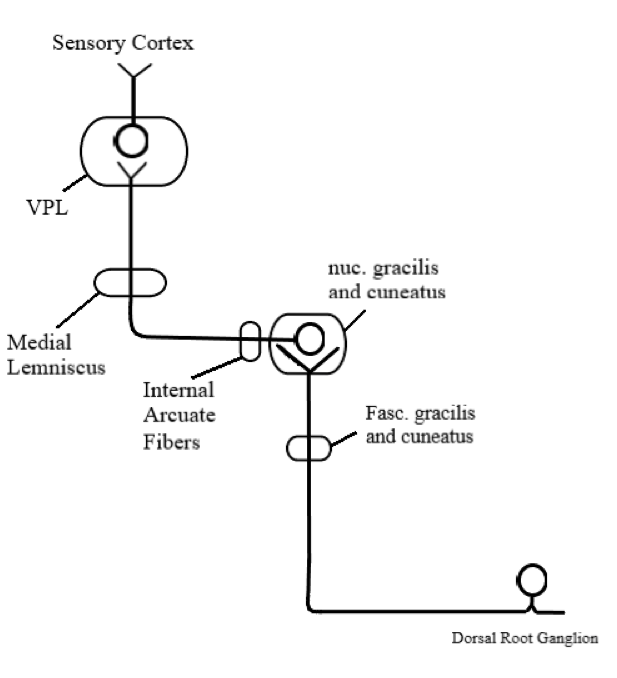 The three order neuron system for the dorsal column.
Contributes by Gerson C.R.