The peroneus brevis muscle is the shorter of the two muscles that make up the lateral compartment of the leg with peroneus longus being the longer muscle.  Peroneus brevis’ function is to evert the foot and plantar flex the ankle.  It receives innervation from the superficial peroneal nerve, and its arterial supply is by muscular branches of the peroneal artery. The origin of peroneus brevis is the lower two-thirds of the lateral fibula and inserts on the proximal fifth metatarsal. The peroneus brevis muscle is relevant to occupational medicine as it is not uncommonly injured in lateral ankle sprains and its tendon (along with the tendon of the peroneus longus muscle) is the most commonly dislocated tendon in the ankle.[1]

The peroneus brevis muscle, also referred to as the fibularis brevis muscle, is located in the lateral compartment of the lower extremity below the knee, underneath the peroneus longus muscle. It is a small, relatively short muscle of the leg that originates from the lower two-thirds of the lateral surface of the fibula bone. Its muscle fibers traverse downwards and form into a tendon which runs just posterior to the lateral malleolus, crossing the ankle, and inserting on the styloid process of the proximal the fifth metatarsal bone.[1]

The ankle joint is a relatively mobile joint that relies on its surrounding ligaments for stability. The structural ligaments of the ankle connect bones to bones and are deep to the muscles and tendons of the ankle and lower extremity. Muscles that cross the ankle joint have a mechanical action on the foot and ankle. The primary movements of the foot and ankle are plantar flexion, dorsiflexion, eversion, and inversion. The peroneal brevis muscle and tendon cross the ankle joint posterior to the fibula. The peroneus brevis muscle assists with eversion of the foot, and to a weaker extent, plantarflexes the ankle.[2]

Embryologic development of the limbs begins at the end of the fourth week of fetal development. By the sixth week, the fetus develops hand plates and footplates. During limb development, the shape of the limb forms from mesenchymal cells, condensing and differentiating into chondrocytes which will ultimately differentiate into the bones and cartilage of the upper and lower extremity.  The upper and lower extremities undergo very similar embryological development patterns.  Limb musculature is first seen around the seventh week. The mesenchyme migrates from the dorsolateral cells of somites out to the limb and differentiates into muscle cells.  The lower extremity muscles below the knee develop later than the proximal muscles of the lower extremity.[3]

For injuries to the peroneus brevis tendon conservative treatment is usually sufficient; however, in highly active individuals surgery to reattach or reconstruct the tendon may be required.

The peroneus brevis muscle is used in reconstructive and plastic surgery of the lower extremity most commonly in non-healing wounds related to diabetic lower extremity ulcers. The peroneus brevis muscle flap is used by plastic surgeons to reconstruct small defects in the lower third of the anterior leg. The muscle along with the peroneal artery can be transposed to small distal wounds of the leg.[6]

Ankle and foot injuries are common in the occupational setting. Being aware of a few of the common pathologies associated with the peroneal brevis muscle and tendon is helpful in making a diagnosis in cases of ankle and foot injury. The most common injuries to the peroneal brevis muscle are to its tendon in the form of tendon sprain, dislocation, or splitting.

The tendinous insertion of peroneus brevis can be injured following an inversion or supination injury resulting in a tendon sprain. During an ankle sprain the peroneus brevis can be torn presenting as persistent swelling along the lateral aspect of the ankle at the peroneal tendon sheath.  Supination-adduction (SAD) injuries to the ankle often involve damage to the lateral ligaments of the ankle, fracture of the distal fibula, and possibly an injury to the peroneal tendons and peroneal retinacula. Occasionally, the base of the fifth metatarsal is also fractured in a lateral ankle sprain and the peroneal brevis tendon may pull on and detach the bone at the metaphyseal-diaphyseal junction, which is called a Jones fracture. This can occur as either an avulsion or oblique/spiral type fracture. Additionally, a strike to the lateral aspect of the foot can result in laceration of the peroneal brevis tendon.

There is a groove in the posterior aspect of the distal fibula is where the tendon of the peroneal brevis muscle sits with the tendon of peroneal longus behind it. The groove is variable depth and may be shallow, which is the reason that the peroneal tendons are the most commonly dislocated tendons in the ankle.  Another cause for tendon dislocation is the peroneus brevis tendon rubbing on fibula and causing an inflammatory periosteal reaction and bony proliferation which can cause chronic subluxation or displacement of the peroneal tendons. A longitudinal (vertically oriented) split of the peroneus tendon can also occur with subluxation. A low-lying or inferiorly positioned peroneus brevis muscle belly can cause tendon problems and lead to instability, dislocation, tendonitis, or tendon tears as well.[7] 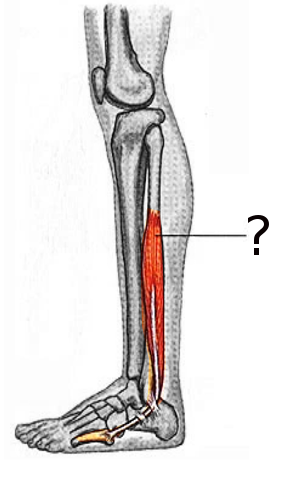