The peroneus longus muscle is one of two muscles in the lateral compartment of the lower limb along with the peroneus brevis muscle.[1] The lateral compartment receives innervation from the superficial peroneal nerve (L5-S2), supplied by the anterior tibial and peroneal arteries. It is important in plantar flexion and eversion of the foot and ankle. The peroneus longus muscle is susceptible to several pathologies, including tendonitis, tendon dislocation, subluxation, rupture, and acute and chronic compartment syndrome.[2][3]

The main function of the peroneus longus muscle is to plantarflex and evert the foot at the ankle. Due to its insertion on the medial aspect of the foot and course down the lateral part of the leg, muscle contraction lifts the foot upward (plantar flexion) and outward (eversion). This movement is critical to the eversion of the foot and can be injured commonly from forced inversion and dorsiflexion of the ankle in the setting of trauma.[4]

Several factors influence the formation of the limb bud musculature, including retinoic acid, sonic hedgehog (SHH), HOX genes, apical ectodermal ridge (AER), and the zone of polarizing activity (ZPA). Retinoic acid is a global organizing gradient that initiates the production of transcription factors that specify regional differentiation and limb polarization. The apical ectodermal ridge (AER) produces a fibroblast growth factor (Fgf), promoting outgrowth of the limb buds by stimulating mitosis.[5][6][7] The specific fibroblast growth factor involved in hindlimb development is Fgf10, which is stimulated by Tbx4.[8] The zone of polarizing activity (ZPA) produces SHH, which promotes the organization of the limb bud along the anterior-posterior axis. SHH activates specific HOX genes–Hoxd-9, Hoxd-10, Hoxd-11, Hoxd-12, Hoxd-13–which are essential in limb polarization and regional specification.[5][6][7] These genes control patterning and consequently morphology of the developing limb in the human embryo.[8] Errors in Hox gene expression can lead to malformations in the limbs.[8]

The common peroneal artery follows the medial border of the biceps femoris, running in a lateral and inferior direction, continuing over the head of the gastrocnemius.[5] The common peroneal nerve wraps around the neck of the fibula, passing between the attachments of the fibularis longus muscle to supply the lateral compartment of the leg.[5] It then divides and terminates into the superficial peroneal, which will supply the lateral compartment of the leg, and the deep peroneal, which will supply the anterior compartment of the leg, including the extensor hallucis longus.[5] The nerve roots of the superficial peroneal artery are L4-S1. Injury to the superficial peroneal nerve can result in loss of eversion and sensation loss over most of the dorsal foot and anterolateral aspect of the distal leg.[11]

The peroneus longus muscle arises the head and upper lateral side of the fibula and inserts on the base of the first metatarsal, medial cuneiform. Its tendon passes inferior to the cuboid bone in a bone tunnel termed the cuboid tunnel and inserts onto the plantar surface of the foot on the medial cuneiform. However, several variants exist that may possess one or more accessory tendinous slips that insert into other neighboring bones or tendons. These physiologic variants are clinically important because the peroneus longus muscle is involved in several pathologies, including traumatic injury, tendinitis, dislocation, acute rupture, and chronic tear. Some of these may be more common with certain physiologic variants. A recent study described common physiologic variants in cadaveric specimens.[12] A table describing the incidence of various bony insertions of the peroneus longus tendon appears below. The description of the most common insertions of the peroneus longus tendon may help physicians better understand the symptoms associated with peroneus longus tendon pathologies and the role played by the tendon in maintaining the arch of the foot.[12]

In trauma and other mechanical injuries, the peroneus longus tendon can become dislocated, subluxated or ruptured. In 2016, a research team queried foot and ankle surgeons nationally to understand their management of acute peroneal tendon tears. There were marked differences in treatment protocols as well as operative techniques. 22% of the surgeons chose nonoperative treatment for greater than one year, while 33% immediately went to operative interventions. For surgeons who decided to operate, 88% tubularized tendons after the repair, 33% excised redundant tissue, and 22% removed the peroneal tubercle if it demonstrated hypertrophy.[13] In symptomatic patients, surgical treatment correlates with improved full return to activity and improved patient-reported outcome scores.[14] A personalized, comprehensive rehabilitation program is necessary to optimize the recovery of surgically treated peroneal tendon tears and ruptures. Since most peroneal tendon tears occur in young active patients and athletes, early return to activity is of utmost importance.

The peroneus longus muscle can also be involved in tendinitis, subluxation, dislocation, and acute or chronic tendon tears. Most peroneal tendon injuries occur in young, active patients, commonly occurring secondary to sports such as football, soccer, and running. Injury to the peroneus longus tendon is a cause of lateral ankle pain and may lead to ankle instability. Tears are most commonly longitudinal due to subluxation over the fibula but can also be transverse.[18] An isolated tear is more commonly found in the peroneus brevis muscle but can also occur in the peroneus longus. Non-operative treatment includes NSAIDs, ice, rest, immobilization, and physical therapy. Steroid injections can also be used in patient’s refractory to the treatments mentioned previously. Recent literature has shown a growing interest in PRP injections under ultrasound guidance; however, it is not commonly adopted in practice yet. If conservative treatment fails, operative treatment can include an open debridement and synovectomy and arthroscopic peroneal tendoscopy for tendinitis. For peroneal tendon tears, operative treatment includes an end-to-end repair, side-to-side anastomosis, or Pulvertaft weave with chronic tears, as well as allograft reconstruction.[19][20] 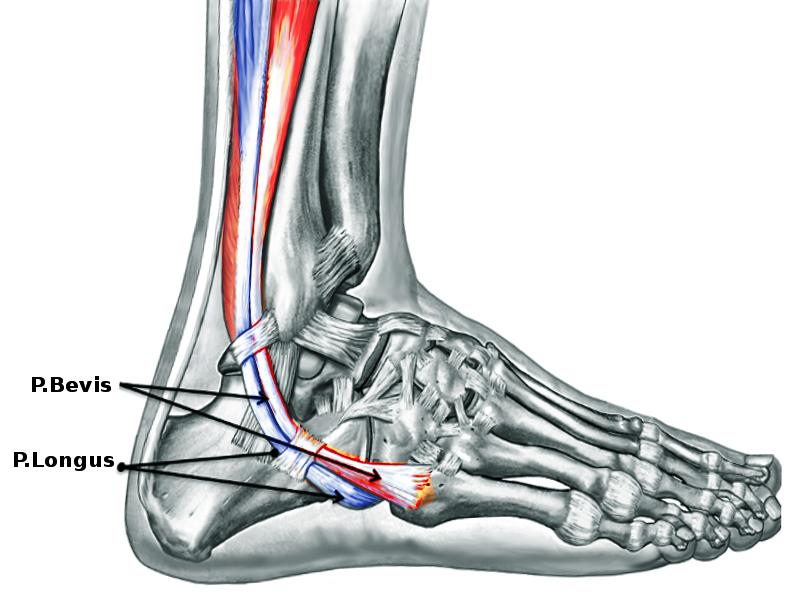 Philbin TM,Landis GS,Smith B, Peroneal tendon injuries. The Journal of the American Academy of Orthopaedic Surgeons. 2009 May;     [PubMed PMID: 19411642]