Peripheral edema is a very common finding in daily medical practice both in outpatient and inpatient settings. It can vary from benign condition to serious medical conditions, including congestive heart failure, liver failure, and kidney failure. This activity reviews the evaluation and treatment of peripheral edema and highlights the role of the interprofessional team in evaluating and treating patients with this condition.

Fluid compartments in the human body are divided between the intracellular and extracellular spaces. The extracellular space constitutes about one-third of total body water, which is further divided into intravascular plasma volume (25%) and the extravascular interstitial space (75%). The fluid balance between these compartments is maintained by hydrostatic pressures and oncotic pressures described by Starling. The other two factors that play an important role in fluid balance are vessel wall permeability and the lymphatic system. The lymphatic system collects fluid and filtered proteins from the interstitial space and returns that back to the vasculature. Any disturbance in this delicate homeostasis that results in net filtration out of the vascular space or impaired return of fluid by lymphatics leads to the accumulation of fluid in the interstitial space that is called edema. Edema can affect any part of the body and ranges from local swelling to full-blown anasarca, depending on the underlying pathology. A classic example of local swelling is an insect bite. An example of anasarca can be seen in nephrotic syndrome.[1]

Edema, other than localized edema, does not become clinically apparent until the interstitial volume has increased by 2.5 to 3 liters because the tissues constituting the interstitium can easily accommodate several liters of fluid. Therefore, a patient's weight may increase by nearly 10% before pitting edema is evident.

Causes of peripheral edema can be divided depending on the underlying mechanism as below.[2]

The most common cause of peripheral edema in patients over 50 yrs of age is venous insufficiency and related to aging, but many other underlying comorbid conditions like heart failure, renal failure, liver failure, and trauma can affect any age group. Peripheral edema can also be commonly observed in pregnancy.

The two basic steps involved in edema formation are alterations in the capillary hemodynamics that favors the leakage of fluid from the vascular compartment into the interstitium and renal retention of sodium and water by the kidneys via the renin-angiotensin-aldosterone system as a compensatory mechanism. Any systemic or local venous obstruction or expansion in plasma volume leads to an increase in the hydrostatic pressure that predisposes to edema. As normal body plasma is only about 3 liters, the diffusion of large amounts of water and electrolytes into the interstitial compartment compels the renal retention of sodium and water to maintain intravascular volume and hemodynamic stability. Effective intravascular volume depletion that occurs in congestive heart failure, liver cirrhosis initiates a neurohumoral cascade to maintain effective circulating volume. This cascade works via renal vasoconstriction, reducing glomerular filtration, increases sodium reabsorption proximally mediated by angiotensin II and norepinephrine, and increases sodium and water reabsorption in the collecting tubules mediated by aldosterone and antidiuretic hormone. Additionally, endothelium-derived factors like nitric oxide and prostaglandins further limit sodium and water excretion, therefore, promoting edema.[2]

The major contributor to maintaining intravascular oncotic pressure is due to impermeant proteins, mainly albumin. Albumin is essential for maintaining plasma oncotic pressure, and a level below 2 g/dl of plasma often results in edema. Hypoproteinemia can occur in many conditions, including nephrotic syndrome, severe nutritional deficiency, and severe liver disease in which hepatic synthetic function is impaired. Some medications, like calcium channel blockers, especially dihydropyridines, are more notorious, causing peripheral edema due to more selective arteriolar vasodilatation. Other uncommon conditions are myxedema, lymphedema, and idiopathic edema. Myxedema occurs in hypothyroidism, causing more often localized edema of the eyelids, face, and hands. There is an accumulation of mucopolysaccharides and proteins in the interstitium due to an increase in capillary permeability followed by sodium and water, but the exact pathophysiology in myxedema is not fully understood. Lymphedema is caused by impaired lymphatic transport leading to the accumulation of lymphatic fluid in the interstitium mostly in extremities.[3] Idiopathic edema is poorly understood that primarily affects premenopausal women. The key features are periodic episodes of edema in hands, legs, and abdominal bloating that are not clearly related to the menstrual cycle. By definition, it is a diagnosis of exclusion. It is most common in the third and fourth decades of life. Psychologic and emotional disturbances can exacerbate this condition.

The history and physical is very important because of a wide range of differential diagnoses in peripheral edema. Therefore, the timing of the edema, any changes with position, whether it is unilateral or bilateral, medication history, and evaluation for systemic diseases, are very crucial. Acute swelling of the limb within 72 hours is more common in deep venous thrombosis (DVT), cellulitis, acute injury from trauma, or recent initiation of new medications like calcium channel blockers. The chronic accumulation of more generalized edema over days, weeks, and months is usually due to underlying systemic conditions like congestive heart failure (CHF), liver disease, and renal disease. Dependent edema is more common in venous insufficiency that usually improves with elevation and worsens with dependency. Edema due to a decrease in plasma oncotic pressure like malabsorption, liver failure, the nephrotic syndrome does not change much with the position. Unilateral edema suggests local insults like DVT, cellulitis, venous obstruction, or lymphatic obstruction from tumor and radiation treatment. On the other hand, bilateral edema suggests systemic diseases such as CHF, liver failure, kidney disease, or severe malabsorption syndromes.[4]

The detailed physical exam can help immensely to differentiate systemic causes such as CHF (common findings are jugular venous distension, dyspnea, bilateral crackles, history of heart disease), liver disease (jaundice, ascites, history of hepatitis, and alcohol use disorder), renal disease (proteinuria, oliguria, history of uncontrolled diabetes and hypertension), thyroid disease (fatigue, anemia, weight gain). Edema should be assessed for pitting, tenderness, and skin changes. Also, in the early stages of lymphedema, pitting occurs due to an influx of protein-rich fluid into the interstitium before fibrosis of the subcutaneous tissue; therefore, lymphedema should be considered in the differential in pitting edema. Tenderness is common in cellulitis and DVT, while edema in systemic diseases like CHF, renal, and liver disease is usually nontender. Acute DVT and cellulitis can increase the temperature of the skin over the affected area due to the activation of cellular and humoral factors. Chronic venous insufficiency is often associated with brawny reddish texture due to the deposition of hemosiderin. In later stages, patients can develop venous ulcers that may progress to deep, weeping erosions.[5] Myxedema, due to hypothyroidism, presents with generalized thick skin with yellow to orange discoloration associated with nonpitting periorbital edema.[6] In lipedema, which is a pathologic accumulation of adipose tissue in the extremities, the feet are generally spared.

Initial efforts in the workup should focus on excluding major systemic causes, including heart failure, liver failure, and kidney failure. Therefore, a thorough history and physical examination are very important to minimize unnecessary testing. If systemic causes are suspected, for example, in CHF, chest radiography, EKG, serum brain natriuretic peptide (BNP) should be checked. Depending on these tests, echocardiography can be obtained for further evaluation.[7] In renal disease, the basic metabolic profile, including serum creatinine and urinalysis to check proteinuria, are the basic laboratory tests. Renal ultrasound can be obtained if suspicion for renal disease is high to rule out intrinsic disease.[8] In liver disease, start with liver function tests and albumin followed by a liver ultrasound if suspicion is high or abnormal labs.[9] If hypothyroidism is suspected, then thyroid function tests followed by ultrasound are obtained if necessary. Doppler ultrasonography is the modality of choice if suspicion for DVT is high. It can also be used to confirm the diagnosis of chronic venous insufficiency. Refer to the flow chart for evaluation and work up below.

Treatment should be guided by an underlying condition that predisposes to the formation of edema.[10] Diuretics are the treatment of choice in CHF, liver, and renal disease. Loop diuretics are usually the most effective, but several doses are required daily because of their short half-life. Patients with cirrhosis often have secondary hyperaldosteronism; therefore, spironolactone is the first choice of diuretic therapy along with furosemide.[11] However, rapid diuresis should be avoided in cirrhotic patients, especially in those without much peripheral edema, to avoid hepatorenal syndrome and hemodynamic collapse in already low intravascular fluid volume. If needed, paracentesis can be performed to reduce the need for a high dose of diuretics and to avoid electrolyte imbalance. In patients with DVT, anticoagulation therapy either with low molecular weight heparin or newer anticoagulants like rivaroxaban or apixaban are used.[12] Currently, warfarin is not used much because of less risk of bleeding with newer anticoagulants.[13] Also, in addition to anticoagulation, compression stockings should be used to prevent post-thrombotic syndrome.[14] In patients with chronic venous insufficiency, mechanical therapies, including leg elevation and compression stockings, are effective. Compression therapy is contraindicated in peripheral arterial disease because it can compromise blood supply further. In lymphedema, treatment involves complex decongestive physiotherapy that is composed of manual lymphatic massage and multilayer bandages. Maintenance therapy includes compression stockings and pneumatic compression devices. In patients where medications are the offending agent, they should be discontinued if possible and switch to a different class.

Following are the differential diagnosis of peripheral edema:

Peripheral edema may be a warning sign for many systemic diseases and if not treated early leads to high morbidity and mortality. The most important diseases to rule out are heart disease, liver disease, and kidney disease. Therefore, detailed history and physical followed by relevant testing are very essential in these patients to decrease the complications.

Patient education is very crucial in peripheral edema as in other diseases. In congestive heart failure, a low salt diet is one of the most important parts of management, along with diuretic therapy. Generally speaking, patients should be educated regarding healthy lifestyles such as exercise, diet, and routine check-ups to diagnose underlying disease entities early and prevent long-term complications.

Peripheral edema can poses a diagnostic dilemma to family physicians due to a wide range of underlying diseases. As discussed above in detail, the causes of edema may be due to a myriad of diagnoses, including heart, liver, renal, thyroid, and other vascular etiologies. Therefore, initial efforts in work-up should focus on ruling out any major organ system failure as the underlying etiology. If the systemic disease is suspected, then it is essential to consult with an interprofessional team of specialists that includes a cardiologist, gastroenterologist, nephrologist, and so forth, depending upon underlying disease suspicion. The nurses are also vital members of the interprofessional group as they will monitor the patient's daily progress, especially when the patient is on diuretics by monitoring daily weights, fluid input, and output. If the patient is on antibiotics or anticoagulants, then the pharmacist will ensure that the patient is on the right dosage and no underlying allergy to that specific medicine. The current recommendations have been developed after an exhaustive review of current medical literature from peer-reviewed journals and book chapters to determine the appropriateness of diagnosis and treatment.

The outcomes of edema depend on the cause. Therefore, to improve outcomes, prompt consultation with an interprofessional group of specialists is very important to prevent complications. 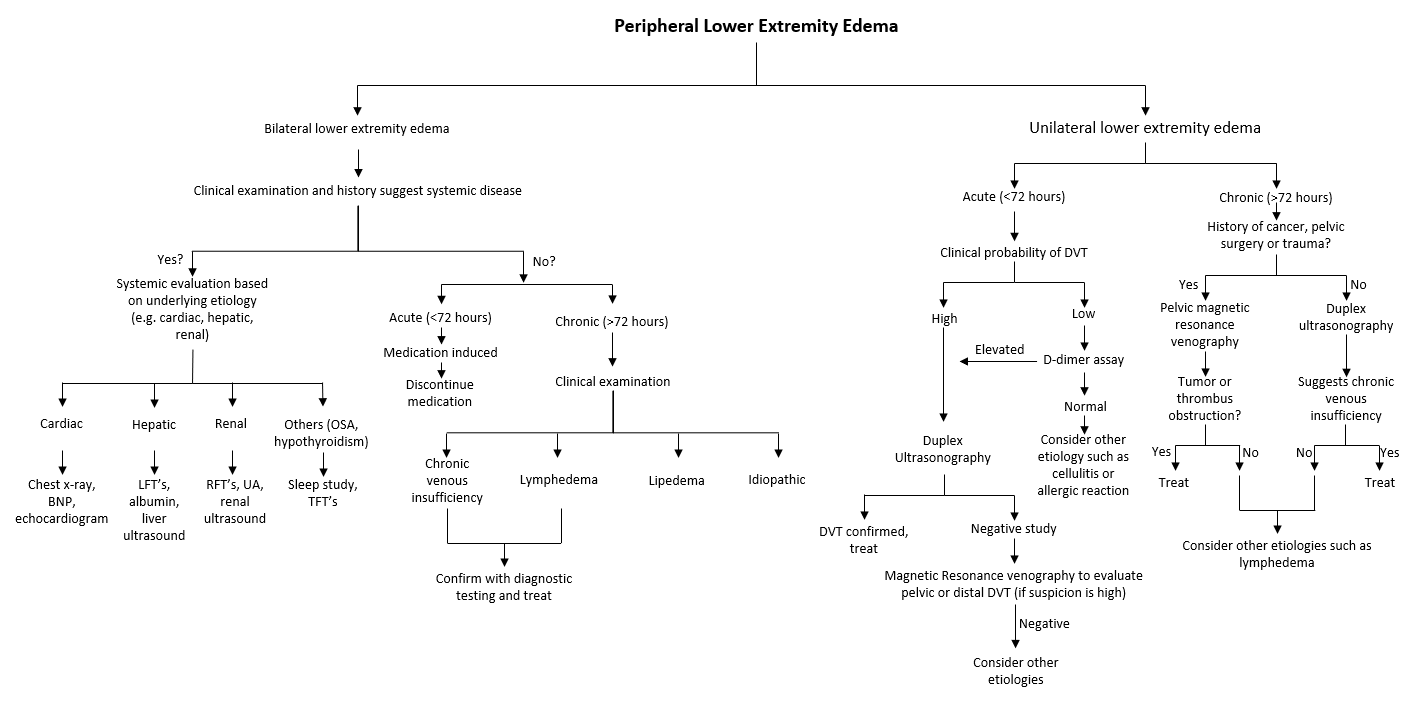 Bestetti RB,Cardinalli-Neto A,Couto LB, The history of the evolution of the knowledge about the diagnosis and the pathogenetic aspects of heart failure: From the Egyptians to James Mackenzie. International journal of cardiology. 2020 Apr 1     [PubMed PMID: 31980269]

Kahn SR,Galanaud JP,Vedantham S,Ginsberg JS, Guidance for the prevention and treatment of the post-thrombotic syndrome. Journal of thrombosis and thrombolysis. 2016 Jan     [PubMed PMID: 26780743]