The parotid gland, along with the submandibular and sublingual glands, is one of the three paired major salivary glands.  The parotid is the largest of the three glands and is bordered superiorly by the zygomatic arch, anteriorly and medially by the masseter, and posteriorly by the sternocleidomastoid. The saliva secreted from these glands moistens the mouth which helps with chewing, swallowing, phonation, and digestion.

The facial nerve courses through the body of the parotid gland, creating a unique relationship which requires focused attention when performing parotidectomies or other surgery in the region of the gland.[1]

The parotid gland can be palpated anterior and inferior to each ear on the lateral surface of the cheek. The inferior aspect is located posterior to the level of the angle of the mandible, and the superior aspect is adjacent to the zygomatic arch. Each parotid gland is comprised of a superficial lobe and a deep lobe divided by the posterior facial vein and facial nerve. Between the lobes of the gland is fatty tissue to accommodate movement of the mandible. The superficial lobe lies lateral to the facial nerve and overlies the lateral surface of the masseter muscle.  The deep lobe lies medial to the facial nerve and is situated between the mastoid process of the temporal bone and the mandibular ramus.  Surrounding each gland is a fascial capsule called the parotid sheath.[2]

The parotid duct (Stensen's duct), which provides an exit for the gland’s secretions, passes through the anterior edge of the gland in the superficial lobe, turns medially at the anterior border of the masseter, penetrates the buccinator, then enters the oral cavity lateral to the second maxillary molar.[2]

As one of the three large paired salivary glands, the parotid is a serous gland that produces saliva to moisten the mouth, helping with chewing, swallowing, phonating, and digestion.  Saliva also functions to prevent dental caries.  The parotid tissue is composed of serous acinar cells and may contain accessory glandular tissue formed of mucinous acinar cells.  Each serous acinus is surrounded by myoepithelial cells that are bordered by a basement membrane layer.  The myoepithelial cells contract to help expel secretions from the acini.  Saliva is first produced in the acinar lumen and then altered into a mixture of electrolytes and macromolecules as it is actively transported through the ducts.  The saliva is hypotonic by the time it has reached the mouth, but salivary flow rates can influence the electrolyte composition.  In addition to electrolytes, saliva also contains mucin and digestive enzymes.  The most important enzyme is amylase, which is important in the initial digestion of carbohydrates. Under certain pathological conditions such as dehydration, salivary flow can decrease, the gland can swell, and infection can ensue. This painful condition is called sialadenitis.

The salivary glands begin to develop between weeks 6 and 7 of gestation.  They start as epithelial buds in the oral cavity then extend into the underlying mesenchyme.

The retromandibular vein is formed from the maxillary and superficial temporal veins and provides venous outflow for the parotid.  It courses deep to the facial nerve, and it may have variable anatomy before it joins the external jugular vein.

Parasympathetic innervation to the parotid comes from the glossopharyngeal nerve (CN IX) and causes secretion of saliva.  The parasympathetic fibers of CN IX originate in the inferior salivatory nucleus in the medulla and travel through the jugular foramen to the inferior ganglion.  A small branch of CN IX, called the tympanic or Jacobsen's nerve, forms the tympanic plexus within the middle ear.  These preganglionic fibers become the lesser petrosal nerve and course through the middle cranial fossa before exiting through the foramen ovale.  They synapse in the otic ganglion, and the postganglionic parasympathetic fibers join the auriculotemporal nerve to innervate the parotid gland to secrete saliva.

The facial nerve courses through the parotid gland, providing motor supply to the muscles of facial expression but does not provide innervation to the gland itself.

Because the facial nerve courses through the glandular substance of the parotid gland, an accurate understanding of the anatomy is crucial when performing parotidectomies.  Any surgery for parotid tumor should identify the facial nerve.  Identification of the facial nerve trunk (FNT) and its branches are critical to prevent damage to the nerve.  Some bony and soft tissue landmarks commonly used to identify the FNT are the cartilaginous tragal pointer, the tympanomastoid suture, the posterior belly of digastric, the styloid process, and the retromandibular vein.[1]

If an obstructing stone (sialolithiasis) causes refractory inflammation despite medical treatment, a procedure called sialoendoscopy can be performed for relief.  A sialoendoscopy uses an endoscope to visualize the stone to aid in management. 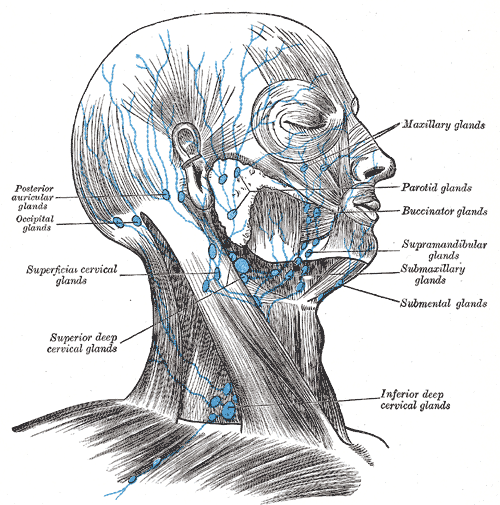 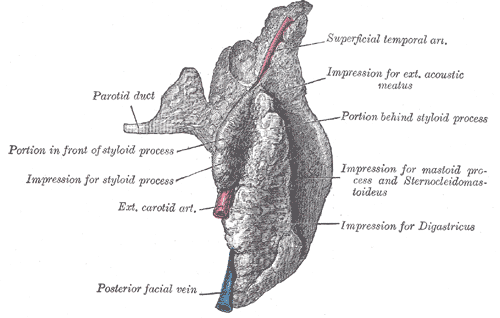 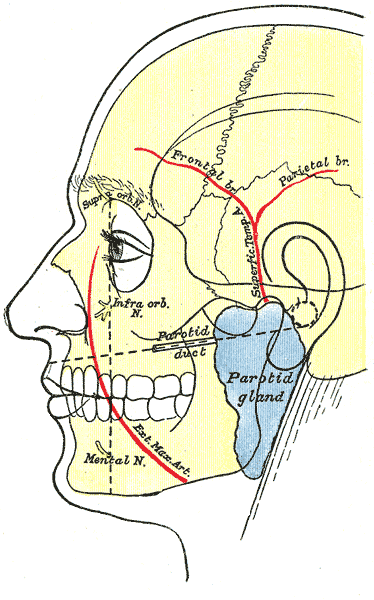 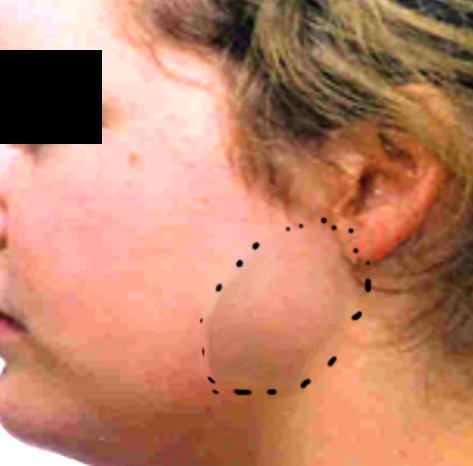