Oxygen is essential for ATP generation through oxidative phosphorylation, and therefore must be reliably delivered to all metabolically active cells in the body.[1][2] In the setting of hypoxia or low blood oxygen levels, irreversible tissue damage can rapidly occur. Hypoxia can result from an impaired oxygen-carrying capacity of the blood (e.g., anemia), impaired unloading of oxygen from hemoglobin in target tissues (e.g., carbon monoxide toxicity), or from a restriction of blood supply. Blood becomes typically saturated with oxygen after passing through the lungs, which have a vast surface area and a thin epithelial layer that allows for the rapid diffusion of gasses between blood and the environment. Oxygenated blood returns to the heart and is distributed throughout the body by way of the systemic vasculature.

Oxygen is carried in the blood in two forms. The vast majority of oxygen in the blood is bound to hemoglobin within red blood cells, while a small amount of oxygen is physically dissolved in the plasma. The regulation of unloading of oxygen from hemoglobin at target tissues is controlled by several factors, including oxygen concentration gradient, temperature, pH, and concentration of the compound 2,3-Bisphosphoglycerate. The most critical measures of adequate oxygen transportation are hemoglobin concentration and oxygen saturation; the latter is often measured clinically using pulse oximetry.

Understanding oxygen transport informs our understanding of the underlying mechanisms of tissue hypoxia, ischemia, cyanosis, and necrosis and management to improve global hypoxemia.

The transport of oxygen is fundamental to aerobic respiration and the survival of complex organisms. The lungs, heart, vasculature, and red blood cells play essential roles in oxygen transport. Oxygen-carrying deficiencies or problems with oxygen transport or delivery are common sequelae of medical illness and must be promptly evaluated and corrected to prevent irreversible tissue damage.

The lungs are the respiratory organs responsible for the exchange of gasses between the bloodstream and the atmosphere.[3] Venous blood entering the lungs typically has a partial pressure (PO) of 40 mm Hg. Upon passing through the alveolar and pulmonary capillaries, oxygen and carbon dioxide are allowed to equilibrate across the blood-air barrier, resulting in carbon dioxide removal from the blood and oxygen absorption. Typically, arterial blood leaving the lungs has a PO of approximately 100 mg Hg.[4] Oxygenated blood is carried through the cardiovascular system to peripheral tissues. In tissues, oxygen diffuses down its concentration gradient from high to low concentrations and is delivered to cells. In the cell, it will act as the terminal electron acceptor in generating adenosine triphosphate (ATP) through oxidative phosphorylation.

Many organs possess compensatory mechanisms for hypoxia. The compensatory mechanism most relevant to the discussion of oxygen transport is the production of the hormone erythropoietin (EPO) by peritubular fibroblasts in the renal cortex.[5] Erythropoietin stimulates the proliferation and differentiation of red blood cells (erythrocytes) in the red bone marrow--a process known as erythropoiesis. The process of erythropoiesis will increase the number of erythrocytes and subsequent increase in total hemoglobin, which both contribute to an increase in the blood's oxygen-carrying capacity.

The body maintains adequate oxygenation of tissues in the setting of decreased PO or increased demand for oxygen. These changes are often expressed as shifts in the oxygen dissociation curve, representing the percentage of hemoglobin saturated with oxygen at varying levels of PO. Factors that contribute to a right shift in the oxygen dissociation curve and favor the unloading of oxygen correlate with exertion. These include increased body temperature, decreased pH (due to increased production of CO2), and increased 2,3-BPG. (Figure) This right shift of the oxyhemoglobin curve can be viewed as an adaptation for physical exertion. Regulation of the unloading of oxygen from the red blood cells to the target tissues is mainly by the concentration of 2,3-bisphosphoglycerate (2,3-BPG) within erythrocytes. 2,3-BPG preferentially binds to and stabilizes the deoxygenated form of hemoglobin, resulting in a lower affinity of hemoglobin for oxygen at a given oxygen tension and a subsequent increase in the availability of free oxygen for consumption by metabolically active tissues.

Another aspect of oxygen transport is the delivery of oxygen to the tissues each minute. This oxygen delivery depends on both cardiac output (CO) and the arterial oxygen content (CaO):

Note: the CaO calculation is given later in this article. Thus, changes in cardiac output, hemoglobin saturation, and hemoglobin concentration all affect oxygen delivery.

Oxygen is measured in the blood in three ways: partial pressure of dissolved oxygen, oxygen concentration, and hemoglobin saturation. Dissolved oxygen is obtained from arterial blood gas (ABG) measurements and is reported as partial pressure. Henry's law dictates that the amount of dissolved oxygen in plasma water equals the PO times the solubility constant of oxygen in the blood, which is determined to be 0.003 mL / mmHg O / dL blood. This PO is 40 mmHg in the venous and 100 mmHg in the arterial blood. Oxygen first has to dissolve in blood before it can bind to hemoglobin. The amount of dissolved O2 depends on the oxygen gradient between the alveoli and blood and the ease at which oxygen can move through the alveolar lung tissue itself, also known as the parameters involved in Fick's law of diffusion.[8]

The most critical clinical test in assessing the efficacy of oxygen transportation is the concentration of oxygen (CaO). Most oxygen in the blood is bound to hemoglobin, while a minimal amount dissolves in plasma water.  Furthermore, the oxygen-carrying capacity of hemoglobin is empirically determined to be 1.34 mL O2 / g Hbg.[9] Thus, when the hemoglobin concentration, hemoglobin saturation (SaO), and PO are known, we can calculate the total oxygen concentration of the blood using the following equation:

The saturation of hemoglobin (SaO2) is another measure of the efficacy of oxygen transport and is the ratio of oxygen bound to hemoglobin divided by the total hemoglobin. Saturation can be determined noninvasively in a clinical setting through the use of pulse oximetry, which measures differences in absorption of specific wavelengths o flight by oxygenated and deoxygenated hemoglobin in the blood. Normal levels should be about 80-100% oxygen saturation of Hb. This technique's limitations are that it is a ratio tied to total hemoglobin and thus cannot detect anemia or polycythemia. Additionally, pulse oximetry cannot detect anemia or that oxygenated hemoglobin is indistinguishable from hemoglobin bound to carbon monoxide. Therefore, a person who has suffered exposure to high levels of carbon monoxide may have a normal oxygen saturation as indicated by pulse oximetry, despite lower levels of oxygen bound to hemoglobin.[10]

A persistent reduction in oxygen transportation capacity is most often the result of anemia. The definition of anemia is a decrease in the total amount of hemoglobin in the blood (generally less than 13.5 g / dL in males and 12.5 g / dL in females), which results in reduced carrying capacity for oxygen. Anemia can result from disorders leading to the impaired production of hemoglobin (e.g., iron, B12, or folate deficiency) or the accelerated destruction of hemoglobin, often resulting from a defect in hemoglobin structure.

Sickle cell anemia ranks as one of the more notable disorders of hemoglobin structure. While the quantity of hemoglobin produced may be normal, a single amino acid substitution of valine for glutamic acid results in a structural defect that promotes the polymerization of deoxygenated hemoglobin. When deoxyhemoglobin polymerizes, it forms fibers that alter the shape of erythrocytes in a process known as sickling.[11] Eventually, repeated stress caused by sickling will damage the membranes of circulating erythrocytes, leading to premature cell death. While sickle cell anemia can remain asymptomatic for a significant time, severe hypoxia may precipitate a sickling crisis, leading to symptoms of generalized pain, fatigue, headache, and jaundice.

Other defects in oxygen transportation may result from an environmental toxin, with one example being carbon monoxide poisoning, also known as carboxyhemoglobinemia. The affinity of carbon monoxide for hemoglobin is 210 times that of oxygen.[11]The binding of carbon monoxide to hemoglobin leads to a drastic left shift in the oxygen-hemoglobin dissociation curve, impairs oxygen molecules' unloading ability bound to other heme subunits. It is important to note that in the setting of carboxyhemoglobinemia, it is not a reduction in oxygen-carrying capacity that causes pathology but rather an impaired delivery of bound oxygen to target tissues.

The primary function of the cardiorespiratory system is to ensure that all metabolically active tissues are adequately oxygenated at all times. Hypoxemia and hypoxia may result when these systems fail and represent major immediate threats to organ function and patient survival. The oxygenation process can be categorized into three stages: oxygenation, oxygen delivery, and oxygen consumption. Respiratory failure will result in a decreased oxygenation of blood. Oxygen delivery, the rate of oxygen transport from the lungs to the microcirculation, is dependent on cardiac output and arterial oxygen content.  And oxygen demand is a product of the metabolic state of the tissues.  All three of these processes must be evaluated and corrected in the clinical setting, particularly in critically ill patients or acute situations. The management of hypoxia typically involves efforts to improve global hypoxemia, oxygen delivery and focuses on blood oxygenation through supplemental oxygen and positive-pressure ventilation and cardiac output. 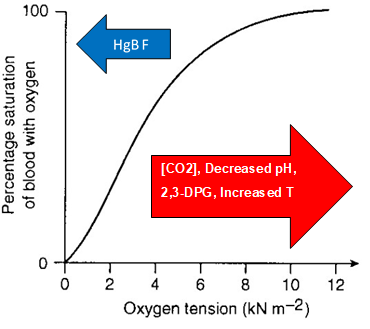