The Organ of Corti is an organ of the inner ear located within the cochlea which contributes to audition. The Organ of Corti includes three rows of outer hair cells and one row of inner hair cells. Vibrations caused by sound waves bend the stereocilia on these hair cells via an electromechanical force. The hair cells convert mechanical energy into electrical energy that is transmitted to the central nervous system via the auditory nerve to facilitate audition.

The primary function of the organ of Corti is the transduction of auditory signals. Sound waves enter the ear via the auditory canal and cause vibration of the tympanic membrane. Movement of the tympanic membrane causes subsequent vibrations within the ossicles, the three bones of the middle ear which transfer the energy to the cochlea through the oval window. As the oval window moves, waves transfer to the perilymph fluid inside the scala tympani and then the scala vestibule of the cochlea. When fluid moves through these structures, the basilar membrane (located between the scala media and scala tympani) shifts respectively to the tectorial membrane (Figure 1A).

The outer hair cells alter the stiffness of the organ of Corti through a motor protein, prestin, located on the lateral membrane of these cells. These proteins vary in shape in response to voltage changes. Depolarization of the outer hair cells causes prestin to shorten, shifting the basilar membrane and increasing the membrane deflection, thereby intensifying the effect on the inner hair cells.[3][4][5][6]

The inner ear originates from the invagination of the otic placodes during the fourth week of development. The otic placodes are sensory placodes, which are a series of transiently thickened surface ectodermal patches that form pairs rostrocaudally in the head region during week four of development. Sensory placodes are involved in the development of special sensory systems like vision, olfaction, and hearing. The otic placodes are one of the first sensory placodes to form and contribute to the formation of the inner ear structures associated with hearing and balance. Otic placode induction is dependent on Wnts and FGFs provided by the hindbrain and surrounding head mesenchyme. The otic placodes are located behind the second pharyngeal arch and give rise to the otic pits by invaginating into the mesenchyme adjacent to the rhombencephalon during the fourth week of development. Towards the end of the fourth week, the otic pits break off from the surface ectoderm to form a hollow piriform shaped structure lined with columnar epithelium called the otic vesicle. At this point, the otic vesicle lies beneath the surface ectoderm enveloped in the mesenchyme, forming the otic capsule. The statoacoustic ganglion also forms during the formation of the otic vesicle and splits into cochlear and vestibular portions. The otic vesicle differentiates to form all the components of the membranous labyrinth and ultimately gives rise to the inner ear structures associated with hearing and balance. As the otic vesicle develops into the membranous labyrinth, its epithelium undergoes variations in thickness and begins to distort. The otic vesicle divides into a dorsal utricular portion and ventral saccular portion, with the dorsal utricular portion giving rise to the vestibular system and the ventral saccular portion giving rise to inner ear structures like the organ of corti that are involved in hearing. The ventral saccular portion develops into the cochlear duct (which houses the organ of corti) and saccule. The dorsal utricular portion forms into the utricle, semicircular canals, and endolymphatic tube.

Outer hair cells have both efferent and afferent connections. They receive input from medial olivocochlear neurons directly onto their cell bodies, axosomatic synapses. These efferent connections form feedback loops that manipulate the stiffness of the Organ of Corti and therein the activity of the inner hair cells. The outer hair cells synapse onto type II spiral ganglion neurons.[1][11] The function of these afferents is still unknown. These neurons do not respond to auditory stimuli.[1]

Individual variations exist in terms of the size and shape of the cochlea. These variations can have wide-ranging effects on surgical outcomes.

Individuals with narrow scala tympani or small cochlear size are at potential risk of experiencing trauma during electrode implantation. Also, the variation in diameter of the cochlear tube may result in limitations with conventional cochlear implants. Some of the smaller diameter tubes may not be large enough for the surgeries in some individuals.[12][13]

Electrode array placement into the cochlea is a current treatment option for high-grade sensorineural hearing loss. Surgical complications are typically associated with surgical technique or device failure. Complications classify as either minor or major. The most common minor complication includes infections, vestibular problems, and tinnitus formation. Major complications include more serious infections, damage to middle or inner ear structures, and device failure problems.[14] These types of complications have decreased over the years with the use of small surgical incisions, the development of smaller implants, and the use of more biocompatible implants.[15]

During electrode array surgery, surgeons should be aware of the location of the petrous portion of the internal carotid artery as well as the jugular bulb. These structures lie near the tympanic cavity and should be avoided during surgery. Although not common, anatomical variations for both of these structures occur including the absence of the bone dividing these vessels and the middle ear and positioning of one or more vessel in either a superior or lateral direction from normal. During surgery, these structures can be damaged, or damage may occur due to post-surgical inflammation. To avoid these complications, CT or MRI imaging of the region should be performed prior to surgery to identify anatomical abnormalities. If imaging reveals anomalies, surgery within the tympanic cleft should be avoided.[16]

Aminoglycoside antibiotics are an example of ototoxic drugs. These drugs are K+ channel blockers. As such, they block the ability of both inner and outer hair cells to depolarize. These types of drugs can also change the concentration of ions within the perilymph which can lead to damage or death of both inner and outer hair cells; destruction of the hair cells causes permanent auditory deficits because they do not regenerate.[1] 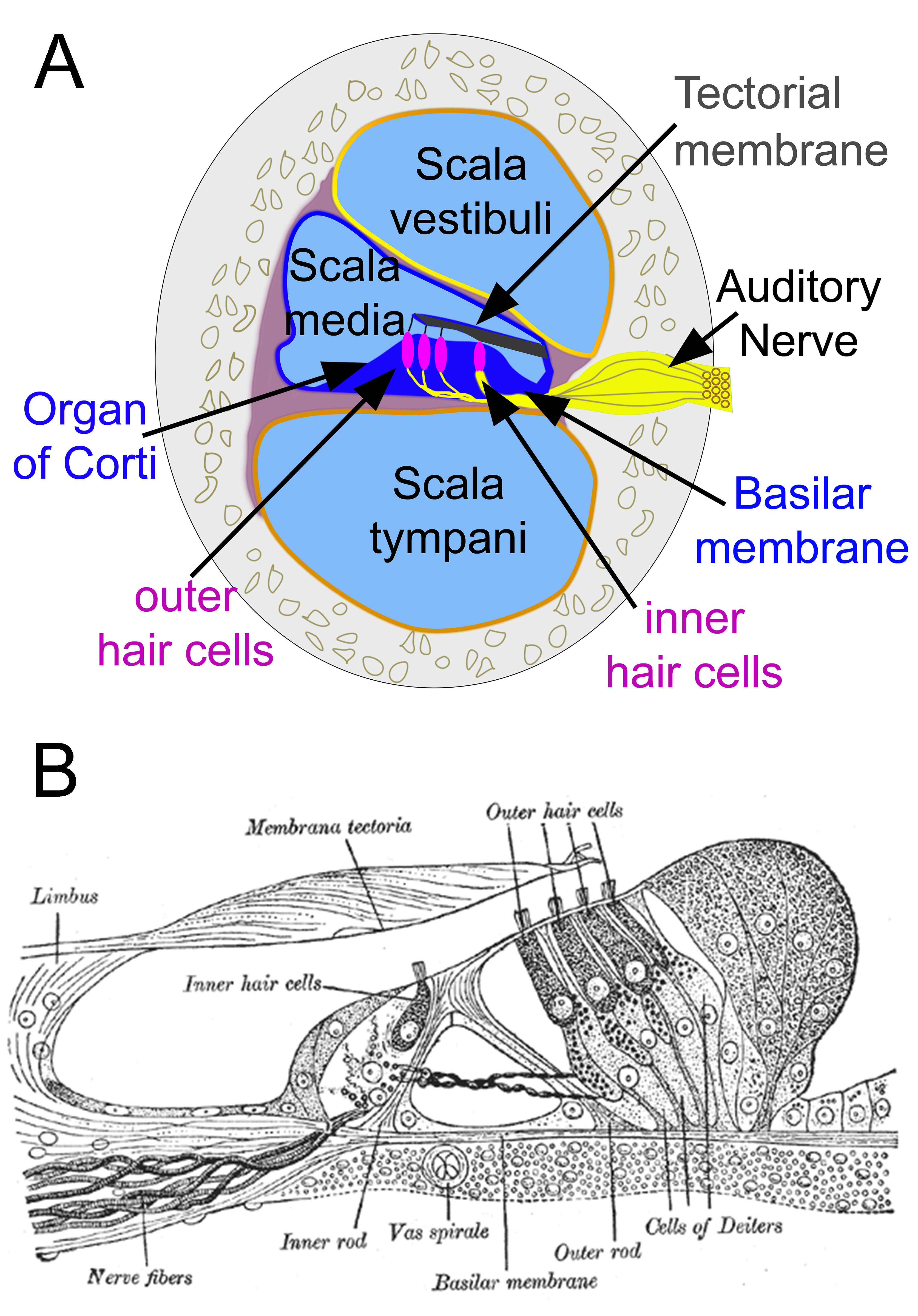