The nose is an anatomically complex structure with wide variation. The nose plays a significant role in facial appearance and functionality.

The external nose is a complex structure that can be divided topographically into three units: the frontal, lateral, and basal views. The upper third contains the paired nasal bones that extend from the frontal bone caudally towards the rhinion. The angle created between the nasal bones and the frontal bone is the nasofrontal angle (also called the radix, or root of the nose) which varies with gender. The nasal bones have two additional bony articulations, the lacrimal bone superolateral, and the nasomaxillary processes inferolaterally. The caudal portion of the nasal bones overlaps with the upper lateral cartilages.[1]

The middle third of the nose contains the paired upper lateral cartilages (ULC) also known as the cartilaginous middle vault region. The ULC’s expand inferiorly and laterally in a rectangular shape and approach the external lateral triangle of the piriform aperture. Superiorly, they fuse with the septum to provide support to the mid-dorsum of the nose.[1] The nasal valve, bordered by the upper lateral cartilage, the septum, and the head of the inferior turbinate, is the flow limiting segment which directly influences airflow within both sides of the nose.

The lower third of the nose is comprised of the paired lower lateral cartilage that form the lateral crus, middle crus and medial crus of the alar cartilage. The medial crurae form the columella as it adjoins the septal cartilage inferiorly and extends from the upper lip to the tip of the nose.[2]

The nasal septum is in the midline of the nose and made of flat cartilage anteriorly and bone posteriorly. The anterior portion is made of irregular quadrangular hyaline cartilage that inserts into the nasomaxillary crest of the maxilla and nasal spine.  The posterior bony part is composed of the vomer, maxillary and palatine bones inferiorly, and the perpendicular plate of the ethmoid bone. [1][3]

The Lateral Wall of the Nose

Intranasally, the lateral wall of the nose is composed of the superior, inferior and middle turbinates. They are responsible for humidifying and warming inspired air. The middle and superior turbinates are extensions of the ethmoid bone, while the inferior turbinate is a single bone. They communicate with the meatus for sinus and lacrimal drainage.[3]

The nose is a highly vascular structure with multiple anastomoses and redundancy of blood supply. The external nose receives vascular supply via the dorsal nasal artery from the ophthalmic artery, which supplies the superior superficial aspect of the nose. The angular and superior labial arteries come from the facial artery and supply the lateral nose, ala, and the columella.[5]

Sensation of the nose comes from the ophthalmic (V1) and maxillary (V2) divisions of the trigeminal nerve. The ophthalmic division has three main branches: the lacrimal, frontal, and nasociliary. The infratrochlear nerve arises from the nasociliary nerve and provides innervation of the superior aspect of the external nose.  The external nasal nerve also arises from the nasociliary and exits between the border of the nasal bone and the upper lateral cartilage, providing sensation to the skin of the nasal tip, the medial aspect of the nasal alae, and the dorsum of the nose. The maxillary division (V2) provides bilateral innervation to the lateral dorsum and alae.

Other important innervations to the nose include the facial nerve(VII) which innervates the nasal musculature and the olfactory nerve (I), responsible for the sense of smell.

The musculature of the nose is divided into elevators, depressors, compressors, and dilators; these allow for a wide range of nasal functions. The facial nerve innervates the muscles of this group. The procerus, levator labii superioris alaeque nasi, and anomalous nasi insert into the alar cartilages and function to elevate and shorten the nose, allowing for dilation of the nasal valves.  The nasalis located in the middle two-thirds of the nose acts to both compress and dilate the nares. The depressor septi muscle inserts into the septum and posterior aspect of the alae enabling depression of the nose.[8]

The upper and lower lateral cartilages have an area of fibrous attachment (the "scroll" region) subject to several anatomical variations.  Nostril shape and nasal sidewall support vary widely, and both influence perception of nasal airflow.

As patients age, alar cartilages soften and soft tissue connections weaken in the lower two thirds of the nose, creating a phenomenon known as Aging Nose Syndrome. This can cause nasal tip ptosis, nasal valve collapse, and nasal obstruction.

The overlying soft tissue of the nose varies in thickness, attachments, and composition among different ethnicities, and these factors should be taken into consideration when planning surgical procedures.

Nasal septal deviation is common. When performing cartilaginous septal manipulation with resection, a one-centimeter segment of caudal and dorsal cartilage should remain to provide structural support to the nose.[6]

Surgical manipulation to the inferior turbinates should be undertaken conservatively to preserve their humidification functions. If surgical treatment is overly aggressive, a phenomenon known as Empty Nose Syndrome can present with pathological nasal dryness and mucus stasis.

Both mechanical and dynamic factors can cause difficulty breathing through the nose. Anatomic malalignment of the nasal septum can present with airway obstruction.

Disruption of the stability of the nasal valves from surgery or trauma may disrupt airflow dynamics or cause airway collapse or obstruction. A number of surgical techniques are available for nasal valve repair, including spreader grafts, butterfly grafts, and alar batten grafts. Hypertrophy of the anterior inferior turbinates is a common cause of nasal airway obstruction and can be present concurrently with nasal septal deviation and/or nasal valve collapse.[9] 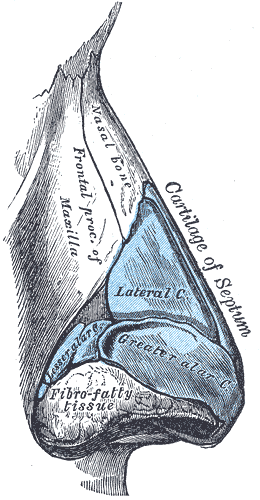 The Organ of Smell, Cartilages of the nose, Side view, Lateral; Greater; Lesser Alar Cartilage, Cartilage of Semptum
Contributed by Gray's Anatomy Plates

A. Lateral wall of the nose B. Nasal septum
Contributed by and with permission from: Dartmouth Medical School (https://www.dartmouth.edu/~humananatomy/)