Neisseria meningitidis (N. meningitidis) was first discovered in 1887 by Weichselbaum from analyzing the cerebrospinal fluid (CSF) of a patient infected with meningitis.[1] It is a human-specific bacterium that causes a multitude of illnesses, collectively termed meningococcal disease. Surprisingly, up to 10% of the general population carry the bacteria in their nose and throat without any adverse effects.[2] Neisseria meningitidis is associated with many infections. However, its association with fulminant meningococcemia and meningococcal meningitis is what has led to its significant impact.  More importantly, despite recent vaccine campaigns to help reduce complications of this disease, its effects are still impacting at-risk populations.

Neisseria meningitidis is an aerobic or facultative anaerobic, Gram-negative diplococcus that exclusively infects humans. There are at least 12 serotypes based on unique capsular polysaccharides of N. meningitidis with serotypes A, B, C, W, X, and Y, causing most of the meningococcal infections. Serotypes A and C are the main serotypes that cause meningococcal disease in Africa. Serotypes B and C are the main serotypes in Europe and the Americas and serotype Y, generally causing infection in the United States and Canada. Serotype W is the cause of epidemic outbreaks around the world and had an association with the Hajj pilgrimages to Saudi Arabia.[3]

N. meningitidis is a common and important cause of community-acquired bacterial meningitis in the United States infecting children and adults. It is a devastating infection with high mortality if not recognized, and treatment started promptly. Other infections that N. meningitidis can cause are meningococcemia (defined as a blood infection due to N. meningitidis), pneumonia, septic arthritis, pericarditis, and urethritis. N. meningitidis can also cause both endemic and epidemic infections and can even infect young, healthy adults.

Humans are the only natural host to carry N. meningitidis and do so in their nasopharynx before systemic infection. Humans so colonized may be asymptomatic carriers. Colonizing the nasopharynx puts close contacts, such as family members, college roommates, and military recruits at an increased risk of contracting N. meningitidis and possible infection. Those involved in laboratory or medical care exposure, such as intubating an infected patient with no face shield or mask, are also at increased risk. N. meningitidis colonization of the nasopharynx via inhalation of aerosolized particles containing the bacteria. The incubation period varies and ranges from 1 to 14 days.[6]

Once colonized, it possesses several virulence factors that aid in its invasion and infection of humans: capsule, pili, opacity proteins, meningococcal serine protease A (MspA), lipo-oligosaccharide (LOS), and human factor H-binding protein. Although N. meningitidis may or may not have a capsule, systemic infection isolates are invariably capsulated, aiding in surviving the immune response. The pili are considered a primary adhesion factor and have increased traversal of the nasopharyngeal epithelium in transgenic mice leading to increased rates of meningitis and septicemia. Opacity proteins, Opa and Opc, also facilitate adhesion to and invasion via receptors found on human epithelial cells, endothelial cells, and cells belonging to the immune system. MspA may also aid epithelial and endothelial cell binding. After N. meningitidis invades the bloodstream, it activates and produces a robust immune response. LOS is an essential component for eliciting the immune response, and via cytokine release leads to endothelial damage, capillary leakage, tissue necrosis, organ failure, and meningococcal sepsis. Human factor H-binding proteins also aid in surviving a strong immune response by binding human factor H and negatively regulating the complement pathway of the immune system. The invasion of the bloodstream is thought to be the primary route to the brain but can also cross the cribriform plate of the ethmoid bone.[7][8]

The clinical presentation of N. meningitidis can vary widely and may initially appear benign, making it difficult to diagnose, especially in areas with no reported epidemic. Typically, the initial presentation of N. meningitidis caused meningitis can include sudden onset fever, headache, nausea, vomiting, headache, severe myalgias, nonspecific rash, sore throat, and other upper respiratory symptoms. These symptoms can be confused for a multitude of other illnesses, including influenza, since many meningococcal infections occur concurrently with influenza in late winter. The potential for rapid disease progression, especially given the possibility of death within hours of symptom onset, makes identifying meningococcal disease early challenging due to its low incidence and non-specific early symptoms. Later presentation of the meningococcal disease includes neck stiffness, photophobia, petechiae or hemorrhagic rash, altered mental status, shock, abnormal skin color, purpura fulminans, or even disseminated intravascular coagulation (DIC).[6]

Vital signs may show hypotension and tachycardia, which indicate early signs of sepsis. The physical exam should always be detailed and include careful inspection of the skin for evidence of a rash. The rash, a distinguishing feature, may initially appear as small lesions that may appear urticarial, macular, or papular. The rash can develop into petechiae, purpura, or ecchymosis later on. These may be early signs of thrombocytopenia, purpura fulminans, and DIC. Although Kernig's and Brudzinski's signs are the classic signs of meningitis, the sensitivity of 55.5% and 53.3%, respectively, make them unreliable in excluding meningitis.[10] When considering signs and symptoms of the disease, the classic triad of fever, change in mental status, and nuchal rigidity is rare (around 44%). However, when two of the four symptoms are present (headache, altered mental status, neck stiffness, and fever), 95% of patients ultimately diagnosed with meningitis were identified.[11] Clinicians should consider N. meningitidis infection in patients with sudden onset fever who display early signs of sepsis, rapidly progressing disease, and the presence of a rash.

Purpura fulminans, a complication of meningococcal disease due to vascular collapse initiated by LOS activating release of inflammatory mediators, is characterized by cutaneous hemorrhage and skin necrosis due to vascular thrombosis. It can even lead to adrenal gland hemorrhaging and failure, termed Waterhouse-Freiderichsen syndrome, and DIC.[12] Typically, the petechiae and erythema are seen on the skin but can evolve into ecchymosis and later painful areas of necrosis with bullae and vesicles developing. Gangrenous necrosis can result and be severe, leading to limb amputation. DIC is perhaps the most feared complication of N. meningitidis infection. Any evidence of bleeding from intravascular access, gingival bleeding, ecchymosis, or skin discoloration should be very concerning.

Although these infections are rarely due to N. meningitidis, meningococcal disease can also include pneumonia, septic arthritis, urethritis, and pericarditis.

A lumbar puncture is the diagnostic tool of choice for the identification of meningitis. After obtaining a patient’s consent, a lumbar puncture should be prioritized to ensure prompt evaluation and diagnosis. Based on patient history and exam, CT imaging may be indicated prior to lumbar puncture to ensure no increased risk for herniation (i.e., those patients with altered mental status, new-onset seizure within one week of symptoms, papilledema, an immunocompromised state, or focal neurologic deficits).[13] If imaging is necessary, coordination with the nursing team and imaging suite are paramount not to delay the antibiotic administration. Antibiotic administration should occur promptly, even before lumbar puncture completion for those patients wherein meningitis is considered the diagnosis. Even in pretreated patients, blood cultures and CSF studies can still be useful. CSF analysis should include Gram stain, culture, glucose, cell count, and protein count. CSF findings that suggest bacterial meningitis include low glucose levels, polymorphonuclear pleocytosis, and increased protein levels. Gram stain can sometimes show Gram-negative diplococci, which is confirmatory in some countries.[14] CSF culture is the gold standard for the diagnosis of bacterial meningitis.[13]

CSF assays exist and include polymerase chain reaction (PCR) and latex agglutination to confirm N. meningitidis infection. PCR detects small quantities of bacterial DNA and has been used increasingly due to rapid results. Because PCR detects strands of bacterial DNA, it does not require an intact bacterium for detection. Latex agglutination is another testing modality using antibody-coated latex beads to detect capsular antigens.[14]

Because meningococcal meningitis can present similarly to other bacterial meningitis, empiric treatment should start while awaiting culture results. This preemptive approach includes a third-generation cephalosporin such as ceftriaxone or cefotaxime. If culture identifies the organism as penicillin-susceptible, treatment can be switched to penicillin G, although continuing third-generation cephalosporin treatment is also an option. For patients who have significant allergies to penicillin and other beta-lactams, chloramphenicol may be an alternative. The duration of antibiotic therapy is usually for five to seven days but can be up to twenty-one days, depending on the patient’s clinical response and culture sensitivity.[5][15]

Patients with meningococcal infection should also be treated aggressively with supportive care, especially for sepsis or septic shock; this may include intravenous fluid resuscitation and vasopressors such as norepinephrine. Patients who show evidence of DIC may need aggressive hydration, blood transfusions, platelet replacement, and possibly even coagulation factor replacement. Researchers have proposed protein C as an adjuvant treatment, but its use is controversial and currently not commonly used.[5]

The mortality rate of meningococcal infection can be as high as 50% in untreated patients. Early and aggressive treatment can reduce the mortality rate to approximately 10 to 14%. Early administration of antibiotics is imperative in determining a good outcome of meningococcal infection. Even with treatment, however, long-term complications can still occur in 11 to 19% of survivors. Complications of meningococcal disease include chronic pain, skin scarring, limb amputation, and neurological impairment ranging from hearing and visual impairments to motor function impairments. Hearing impairment and amputations occur in approximately 3% of cases, arthritis occurs in 10% of cases, and post-infection inflammatory syndrome occurs in 6 to 15% of cases.[5]

Similar to other causes of bacterial meningitis, patients who survive meningococcal infections should follow up routinely. Hearing tests within four weeks of hospital discharge is recommended. Orthopedic follow-up and prosthetic fitting are necessary for patients who suffered limb amputations. Patients may even suffer from psychological and psychiatric complications, including post-traumatic stress disorder, depression, and behavioral abnormalities that may need to follow up with psychology and psychiatry.[15]

People who come in close contact with meningococcal infected patients can become infected and show symptoms within ten days after initial contact. Close contact refers to proximity less than 3 feet for greater than 8 hours (e.g., family members, roommates, military recruits, daycare centers). Those who are exposed to the patients oral (e.g., kissing) or respiratory secretions (e.g., intubation, suctioning, passengers close on a long flight) are also at risk. If recognized, antimicrobial chemoprophylaxis should commence. Due to the high efficacy in chemoprophylaxis, strongly consider this in patients if there is questionable close contact. Several options are available and include ceftriaxone, rifampin, and ciprofloxacin.[5]

Meningococcal infection is a devastating, contagious disease that can progress rapidly. Recognizing the illness is perhaps the most challenging part in assessing and treating patients. It requires an interprofessional team consisting of physicians, infectious disease specialists, ICU nurses, pharmacy, proper isolation protocols, and the local health department working together in treating infected patients. Meningococcal is a reportable disease, and the local health department can assist in identifying those at risk and in managing outbreaks.

Clinicians who initiate treatment would do well to enlist the assistance of an infectious disease board-certified pharmacist, who can verify agent selection with the latest antibiogram data, as well as verifying dosing and checking for drug interactions that may compromise therapy. Nursing will usually administer these agents, and need to understand appropriate isolation protocol as well as monitoring for therapeutic effectiveness and adverse reaction, informing the team promptly of any issues. The interprofessional team approach is the best means by which to optimize therapeutic results while minimizing infections spread and adverse reactions [Level 5]

The top goals in meningococcal infection are prevention and early recognition. The infectious disease nurse should educate patients about vaccination. Vaccination is the best strategy in preventing disease, especially in at-risk populations. Due to new vaccinations recently introduced worldwide, the overall burden of meningococcal infection has diminished. Those at risk should be vaccinated and include college students, military recruits, patients who are immunocompromised, including those with HIV/AIDS, complement deficiency, and those with asplenia. 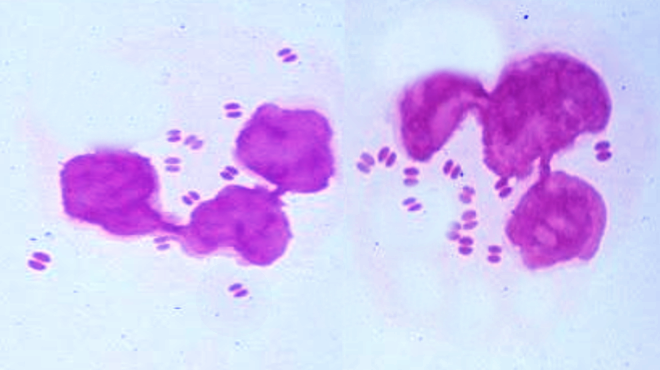