Nasotracheal intubation (NTI) involves passing an endotracheal tube through the naris into the nasopharynx and the trachea; most commonly after induction of general anesthesia in the operating room. The use of NTI permits administration of anesthetic gases without limiting access to intraoral anatomy and is commonly used for procedures including dental, oropharyngeal and maxillofacial operations. [1][2][3]NTI is an essential skill for anesthesia providers.  Due to the potential complications of performing NTI, it is recommended that NTI not be attempted by anyone who is not skilled at orotracheal intubation as well.[4][5]

Being able to perform NTI properly requires knowledge of the anatomy of the nasal vestibule, nasal cavity, nasopharynx, oropharynx, hypopharynx, and larynx.

The hard palate provides the floor of the cavity that runs horizontally and directly behind the nares. The ceiling of the nasal cavity is formed from the narrow cribriform plate of the ethmoid bone. Lastly, both left and right lateral walls are established by the medial walls of the orbit superiorly and the maxillary sinus inferiorly.

The lateral nasal walls contain the turbinates, which project into the nasal passages as ridges of tissue and are responsible for maintaining moisture and warmth in the nasal cavity.

The nasal cavity is separated by a nasal septum consisting of both a cartilaginous part that sits anteriorly and a bony portion located posterosuperiorly. This septum separates the nasal passages into left and right sides; these two cavities eventually coalesce to form a single continuous cavity in the back of the nose (the nasopharynx).

The nasal cavity is lined by respiratory mucosa (histologically described as ciliated pseudostratified columnar epithelium) lying on an extremely vascular stroma. These cells produce serous secretions that aid in humidification of inspired air. The cilia help to prevent unwanted debris from entering the lungs.

Due to the high vascularity of the nasal cavity, minor trauma to any part of the tissue can cause bleeding to occur (epistaxis). The anterior nasal septum is particularly susceptible to developing epistaxis owing to the superficial location of the arterial plexus. This plexus is known as Kiesselbach’s area and is supplied by branches of the anterior and posterior ethmoid, superior labial, sphenopalatine and greater palatine arteries.

While considering normal nasal cavity anatomy, it is also important to understand that anomalies do often exist. Septal deviation is perhaps the most common abnormality involving the nasal septum. The deviation is most often due to trauma but can also be congenital or iatrogenic in nature. Other anatomical variations include conditions that result in unilateral obstruction such as nasal polyps, concha bullosa, septal spurs, stenosis, and choanal atresia. It is important to consider these possbilities during pre-anesthetic evaluation to minimize any complications as most of these variations will result in changes to airflow dynamics inside the nasal cavity. Nasal polyps or spurs may be unilateral, which may dictate which side of the nose is more amenable to NTI.[6][7][8]

Indications for NTI include, but are not limited to the following:

Some of the necessary equipment needed to perform a nasotracheal intubation includes the following:

A pre-anesthetic evaluation must be performed for each patient undergoing a procedure requiring anesthesia with a particular focus on identifying any potential risks or complications related to the upcoming procedure and composing an individualized plan for patient care. Often, the patient can relay important information regarding unilateral restriction or congestion and give some direction as to which side should be used for the NTI. If the patient interview does not yield information related to relative patency of one side versus the other, then physical examination may guide laterality of intubation.

Anterior rhinoscopy may be performed (this is not a common practice) which gives the provider the ability to visualize the anterior portion of each nasal cavity. The main limitation of anterior rhinoscopy is the inability to provide information regarding the posterior nasal cavity. To fully assess the pathway, a flexible fiber-optic bronchoscope may be passed into the nasopharynx.[9][10]

Once the choice of laterality is determined, NTI may proceed. The first step to performing an NTI is a generous application of vasoconstricting spray bilaterally. Topical anesthetic may be applied via spray or by use of a lubricant mixed with a local anesthetic.

After topical anesthesia and application of vasoconstrictor, some practitioners advocate usage of a device to “dilate” the tissue, commonly a nasal airway. The necessity of dilation before intubation is a topic of debate in the anesthesiology community. Currently, there are no PubMed indexed papers showing benefit from this practice, only increased complications from repeated instrumentation of delicate structures. As of the time of this article’s writing "dilation" is not a recommended practice.

Prior to intubation, the patient should be pre-oxygenated with an FiO2 of 1.0 and ventilation assessed before muscle relaxant is administered.

It is important to lubricate the distal end of the nasotracheal tube, with the most common lubricants being either lidocaine or a plain, non-medicated water-soluble jelly.

After insertion into the naris, gentle pressure should be applied to advance the tube with the vector of force directed posteriorly, towards the nasopharynx and the operating room table. Some manipulation will be required while passing the tube through the nasal cavity and some resistance will be encountered along the way.

If the amount of resistance felt is significant, the tube may be repositioned before attempting to advance farther. A smaller-sized endotracheal tube (ETT) may be needed if the anatomy cannot accommodate passage of the tube. It is important to keep in mind that for the nasal RAE tube, the diameter is proportional to the length of the tube so if a tube that is too small is chosen it may not advance far enough into the trachea for the balloon to be completely subglottic. Options include switching to a standard ETT, considering orotracheal intubation, or changing sides and approaching the contralateral nostril.

When the ETT has reached the posterior nasopharynx and passes the soft palate into the oropharynx, transoral direct laryngoscopy will be performed, and Magill forceps used to advance the tube between the vocal cords and into the trachea. Once the ETT cuff has passed the vocal cords and is inflated, the chest should be auscultated to confirm the positioning of the tube.

The position of the patient’s head should be noted during and after intubation with regards to the depth of the ETT. Flexion may advance the tube deeper into the trachea, which is usually of little clinical significance when using a nasal RAE since the likelihood of endobronchial intubation is low with an appropriately-sized tube. Perhaps more likely is the withdrawal of the tube with extension of the neck. If a relatively small tube is used for intubation, owing to a narrow nasal passage, extension of the neck can force the balloon against the vocal cords and may lead to injury, balloon herniation or extubation.

The most common complication of nasotracheal intubation is epistaxis, which occurs with nearly every NTI. Other complications include bacteremia (by introducing bacteria from the nasal cavity into the body due to trauma from the tube) and risk of perforation (retropharyngeal perforation, soft palate perforation, or perforation of a piriform sinus). As mentioned previously, it is best to avoid NTI in patients who have sustained high-speed trauma or isolated facial trauma due to the risk of inadvertent placement of the ETT into the brain.

Nasotracheal intubation is a useful technique for patients undergoing intraoral surgery that has proven to be very safe and effective when used properly. Knowledge of the anatomy, indications, contraindications, and complications is a required skill for anesthesia providers.

Nasotracheal intubation is commonly performed by anesthesiologists and nurse anesthetists. The technique requires knowledge of the upper airway anatomy. It is a useful technique for intubation when the oral cavity is not available. Patients must be closely monitored during the procedure and auscultation of the lungs and end tidal PCO2 levels must be monitored to ensure that the tube is in the trachea. Unlike the oral tubes, the nasotracheal tubes can be easily dislodged, so one has to ensure that the patient's head is stable throughout the procedure.[11] 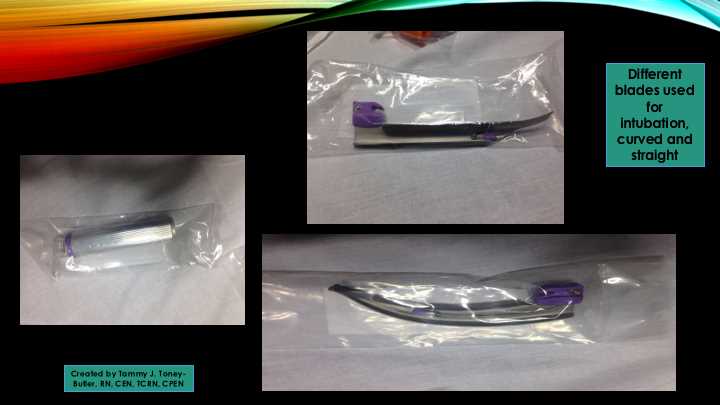