In 1965, Eger et al. introduced the concept of minimum alveolar concentration (MAC), and it has since been used as the standard measure of potency for volatile anesthetic agents. Previous attempts to create a measure to determine the adequacy of anesthetic dosing, such as the Guedel stages of anesthesia or Woodbridge concept of “nothria” were all qualitative measures that varied depending on the inhaled anesthetics. The concept of MAC negated the variability by measuring a single quantitative endpoint: immobility. It is defined as the concentration of inhaled anesthetic within the alveoli at which 50% of people do not move in response to a surgical stimulus. MAC uses the measurement of end-tidal anesthetic as a measure of the level of anesthetic within the alveoli and, in turn, at the level of the central nervous system. It is a useful and reproducible metric in both animals and humans across all volatile anesthetics, making it the standard for comparison of volatile anesthetic potency.[1]

Minimum alveolar concentration (MAC) provides a correlation between anesthetic dose and immobility. It can be applied to all inhalational anesthetics and is used to compare anesthetic potency.[2] Both animal and human studies have found that volatile anesthetics depress spinal motor-neuron excitability, which is why immobilization is mediated largely at the level of the spinal cord by inhaled anesthetics.[3] Immobilization is mediated by other aspects of anesthesia such as amnesia and hypnosis in the subcortical and cortical regions of the brain. Studies in rats demonstrated this concept by introducing lesions in the central nervous system to sever connections between the spinal cord and the brain, and it was found that these lesions did not alter MAC.[1]

Before the concept of MAC, the Meyer-Overton relationship was well established; it stated that all fat-soluble agents would function as anesthetics due to their ability to cross the lipid bilayer of neurons.[4] Although lipid solubility is not the sole determinant of potency, as proteins are likely the target site for volatile anesthetics, this concept holds true for volatile anesthetics. Following the Meyer-Overton theory, MAC could be estimated by using the following equation[1]:

Where Lamda equals the olive oil/gas partition coefficient for the volatile anesthetic.

Many variables alter minimum alveolar concentration (MAC), changing the amount of anesthetic required to prevent movement. When a factor is present that increases MAC, there is a decreased potency of volatile anesthetic for that person, and they require a larger amount of anesthetic to achieve immobility. The inverse is true for factors that decrease MAC. It is important to note that the conventional values of MAC are determined at a reference pressure of 1 atm and that changes in ambient pressure will change MAC.[5]

Factors such as species, sex, hypothyroidism, hyperthyroidism, or duration of anesthesia do not affect MAC; however, the age of the patient does influence the minimum alveolar concentration. MAC peaks at 6 months of age, and then decreases by approximately 6% per decade, regardless of volatile anesthetic.[5] A comprehensive meta-analysis determined the relationship between MAC and age could be described with reasonable accuracy by the following equation[1]:

where MACage is the MAC at a given age and MAC40 is the MAC value at age 40.

See table 1 for the list of MAC values for the most commonly used inhaled anesthetics in a 40-year-old patient.

Several physiological derangements, such as anemia, hypercarbia, and hypoxia, have been shown to decrease MAC.[1] Temperature is also a consideration that can influence the MAC of volatile anesthetics. MAC decreases with decreasing body temperature by approximately 4% to 5% with every decrease in degree centigrade. The anesthetic requirement continues to decrease in a linear fashion, with complete elimination of the need for anesthetic at 20 degrees C. The opposite is true for hyperthermic patients, who have an increased MAC requirement. The exception to this is nitrous oxide (NO), as the MAC for NO does not change with decreasing temperature.[5]

A special population to consider are those who are pregnant. Although the underlying cause is unclear, it has been found that MAC requirements are decreased during pregnancy by as much as 30%.[6] The increased potency of volatile anesthetics for this population also extends into the early postpartum period.[1]

Interestingly, it has been found that individuals with red hair have a decreased sensitivity to anesthetics, and have an increased MAC requirement.[7]

Many pharmacological agents alter MAC. Commonly-used classes of drugs in anesthesia such as sedative-hypnotic agents, intravenous drugs that potentiate GABA, a2-adrenergic agonists, local anesthetics, and opioids all decrease MAC. These include medications such as barbiturates, benzodiazepines, propofol, etomidate, and dexmedetomidine. A decrease in MAC requirement is also seen with ketamine, lithium, and verapamil.[1]

Patients presenting with a depressed level of consciousness due to trauma or a cerebrovascular insult, or patients with neurodegenerative changes due to dementia or other cognitive conditions have a decreased anesthetic requirement.[1]

Hypoxia below 30 mmHg, acute metabolic acidosis, and acute hemorrhagic hypotension all produce decreases in roughly 10% to 50% of initial MAC.[2]

Both minimum alveolar concentration (MAC) and lipid solubility vary among different volatile anesthetics. The most commonly used anesthetics follow the order of nitrous oxide > desflurane > sevoflurane > isoflurane > halothane, for highest to lowest MAC. This order follows the Meyer-Overton rule and has a direct correlation with oil/gas partition coefficient.[4]

When combining inhaled anesthetics, it is important to note that there is a roughly additive effect for MAC.[5] For example, 0.5 MAC of nitrous oxide (54%) combined with 0.5 MAC with sevoflurane (1%), will have the clinical effect of 1 MAC of any volatile anesthetic.

When looking at a normal distribution, MAC represents one point on the dose-response curve and is the equivalent of a median effective dose (ED50). In addition, the standard deviation (SD) of MAC is approximately 10%. Following the properties of a normal distribution, MAC + 1 SD (1.1 MAC), would produce immobility in roughly 68% of the population, and MAC + 2 SDs (1.2 MAC) should produce immobility in approximately 95% of patients.[1] Providers can use these principles to titrate their anesthetics appropriately.

Besides immobility, MAC can be used clinically to assess unconsciousness, amnesia, eye-opening, and autonomic response, using the concepts of MAC-awake, MAC-amnesia, and MAC-bar. MAC-awake is defined as the anesthetic concentration needed to suppress a voluntary response to verbal command (i.e., eye-opening) in 50% of patients.[5] It is generally one-third of MAC for the inhaled anesthetic being used.

MAC-amnesia is the anesthesia concentration required to suppress recollection or explicit memory of a noxious stimulus. Within the brain, volatile anesthetics act on the amygdala, hippocampus, and cortex, which are responsible for the formation of explicit episodic memory. Anterograde amnesia is achieved at roughly 0.25 MAC, compared to unconsciousness, which is generally achieved at 0.5 MAC.[1]

The MAC for endotracheal intubation (MACEI) is defined as the end-tidal concentration of inhaled anesthetic agents at which 50% of patients can be intubated smoothly.

The MACEI/MAC ratio for sevoflurane is about 1.3 in children and 3 in adults. Thus, if only inhaled anesthetic agents are used in adults, intubation will require a very high concentration of volatile agents which might result in hemodynamic instability. So, muscle relaxants and opioids are used to facilitate intubation as a part of balanced anesthesia.

The concept of MAC-bar is an estimate of the MAC of volatile anesthetic that blocks autonomic responses to surgical incision in 50% of patients. The autonomic responses commonly used to define MAC-bar are changes in pupil dilation, heart rate, and blood pressure.[1] MAC-BAR was determined by measuring the level of catecholamine in venous blood and has been calculated to be roughly 1.5 MAC.

One of the major limitations of minimum alveolar concentration (MAC) is that it is not applicable when administering total intravenous anesthesia. Furthermore, in clinical practice, it is common to administer balanced anesthesia, including the use of neuromuscular blockade, intravenous anesthesia, and opioids. While these drugs tend to decrease MAC, they may not equally affect MAC-awake or MAC-amnesia. Therefore, MAC cannot be used as the sole measure of anesthetic effect.[1]

Minimum alveolar concentration can be used to titrate the level of volatile anesthetic to achieve and maintain a safe level of anesthesia. It is a concept used routinely by all anesthesia providers and is imperative when it comes to patient safety, decreased awareness, and patient comfort. 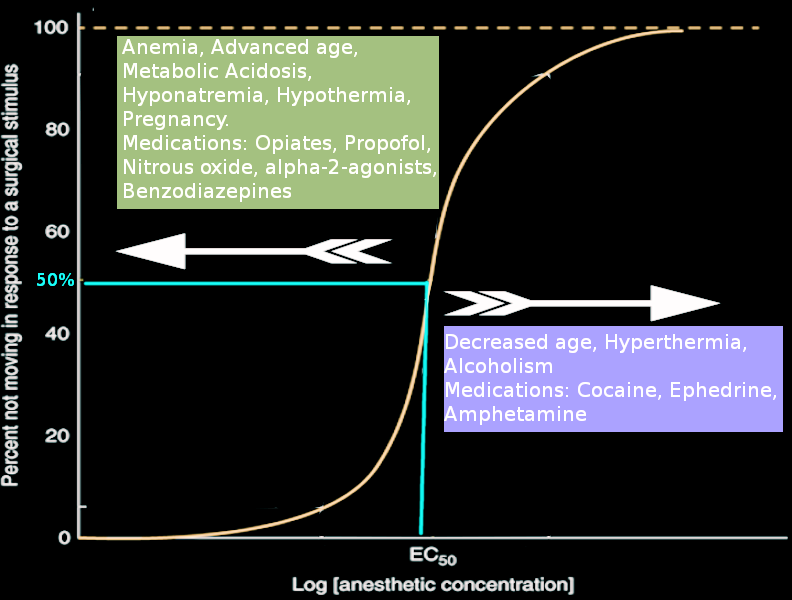