Microsporidia are an unusually large group of unique, eukaryotic, obligate, intracellular parasites that biologists have studied for more than 150 years. Microsporidia are well-adapted pathogens and important agricultural parasites that infect honeybees, silkworms, and other insects. The organism is also a parasite for fish, rodents, rabbits, primates, and humans. This activity reviews with emphases on its pathophysiology and presentation and highlights the role of the interprofessional team in its management.

Microsporidia are an unusually large group of unique, eukaryotic, obligate, intracellular parasites that biologists have studied for more than 150 years. Microsporidia are well-adapted pathogens and important agricultural parasites that infect honeybees, silkworms, and other insects. The organism is also a parasite for fish, rodents, rabbits, primates, and humans. This article reviews Microsporidia with emphases on the latest biological discoveries.

Biologists have studied Microsporidia for more than 150 years. Microsporidia include 187 genera with approximately 1500 species. Microsporidia are ubiquitous in the environment; they have evolved in a unique and sophisticated manner so that they not only survive in the surrounding environment but are also able to live inside other cells.[1]

Classification of Microsporidia is based on microscopic morphology and ultrastructural spores characteristics. The host range in many cases is incongruent with the phylogenetic relationship that is further revealed by molecular methods through rRNA genetic sequencing which is currently used as the principle way of defining taxonomy.[2]

Infection with Microsporidia also known as microsporidiosis occurs worldwide. Infection occurs via commonly known pathogens in agriculture and leads to lost resources. The classic species include Nosema apis and Nosema ceranae that infect honeybees. Studies have shown that the mortality rate of honeybees infected with N. ceranae is nearly 94%, and infected populations usually die within 8 days. Three days post-infection, the observed mature spores inside host cells signal that the lifecycle of the parasite is complete. The parasite invades both the tip of folds and the basal cells of the bee’s epithelium, and the infection spreads between epithelial cells rapidly.[3]

In humans, infection with this opportunistic pathogen was not highly recognized at the beginning of the century. In 1924, researchers first suggested that Microsporidia infected humans, and until 1985, only a few reports of human microsporidiosis were published. After this, Microsporidia became increasingly recognized worldwide as opportunistic infectious agents, and presently, Microsporidia are recognized as emerging organisms in many areas of both developed and developing countries.[4] Microsporidia are widely distributed worldwide among children, travelers, organ recipients, elderly, patients with malignant disease and diabetes, and HIV patients.[4] In developed countries, the occurrence of microsporidiosis in HIV patients has gradually decreased due to anti-retroviral therapy and better hygiene.

Among the nearly 1500 species described, only 17 are pathogenic to human, and some of them include Enterocytozoon bieneusi, Encephalitozoon, Anncaliia, Enterocytozoon, Tubulinosema, Microsporidium africanum, and Trachipleistophora hominis. In the majority of cases, E. bieneusi and Encephalitozoon intestinalis have been the 2 species detected most often in infected humans.[5]

In developed countries, the prevalence rates for Microsporidia infection in HIV-seropositive persons with diarrhea range from 2% to 78% varying by degree of immunosuppression and treatment. In HIV-seropositive persons without diarrhea, infections range from 1.4% to 4.3%.[6] In individuals not infected with HIV, the seroprevalence rates range from 1.3% to 22% among blood donors, pregnant women, slaughterhouse workers, and persons with unknown causes of diarrhea (possibly caused by Microsporidia infection).[7]

The clinical manifestation of microsporidia infection ranges from asymptomatic infection to symptomatic infection that includes diarrhea, myositis, keratitis, and bronchitis. Although rare, encephalitis may also occur.[8] The median incubation time of the disease during foodborne transmission is between the date of the symptoms and onset of illness is about 7 days (range 3 to 15 days). In HIV-infected patients, microsporidia infection is recognized as an increasingly important cause of morbidity and is responsible for significant gastrointestinal (GI) and disseminated disease. On rare occasions, E. bieneusi causes pulmonary infections or infects the bile ducts leading to cholecystitis and cholangitis.[7] Reports of ocular infections with microsporidia are rare but are more common in immunocompromised than in immunocompetent persons.

It remains unknown how much of the spore titer is required for infection in humans, but it appears to vary among the different subspecies. The spores that infect humans are usually 1 to 4 micrometers, and children with an asymptomatic picture appear to have 1.2 x 10 spores of E. bieneusi per gram of feces. Whereas, in HIV-infected patients, the concentration of E. bieneusi spores vary from 4.5 x 10 to 4.4 x 10 per milliliter of diarrheic feces, totaling 10 spores in 24 hours.

Microsporidia disease transmission occurs mostly through food (foodborne disease) including the global food chain industry of fish and crustaceans (shrimp, lobster, clams, among others). Transmission also occurs through water including crop irrigation, seawater, drinking water, groundwater, wastewater, excreta in the environment, and sludge.[9] Vertical transmission from mother to offspring has also been observed in rabbit, sheep, and non-human primates. Zoonotic transmission through animals acting as reservoirs has also been noted in some studies.[10][9] Although rare, the transmission through fecal-oral and aerosols may also occur in human infection cases.[11]

In 1838, Gluge described the earliest report of microsporidia existence when the parasite infected fish. This was later named Glugea anomala. In 1857, Professor Carl Wilhelm von Nageli recognized the first microsporidia Nosema bombycis.[12][1] N. bombycis infected both Lepidoptera and Hymenoptera, causing pebrine/pepper disease, named by Professor Jean Louis Armand de Quatrefages de Breau in Paris. The disease infected silkworm eggs causing the larvae to be covered with blackish blotches. The disease caused by N. bombycis was severe and almost destroyed the European silk industry in France, Italy, and Germany. Nageli first regarded this parasite as a yeast-like organism and classified it as Schizomycetes, a consensus group of yeast and bacteria.

Further microsporidia research included that of Louis Pasteur with his landmark study of N. bombycis. He proposed pebrine disease control and prevention that not only significantly saved the silk industry in Europe but also became the primary influence of Pasteur’s germ theory of disease. The taxonomic determination of microsporidia was controversial for several years, and many researchers proposed they were unicellular algae, yeast spores, fungi-related organism, and even as tumor cells or degraded erythrocytes.[1][12]

After a series of studies on the silkworm pathogen, Balbiani recognized that the organism lacked several Schizomycetes characteristics but shared similarities with the Sporozoa. Consequently, in 1882, Balbiani first suggested the separate taxon Microsporidia for N. bombycis, which was the only named microsporidium at that time. In 1977, Sprague designated the phylum Microspora which was updated in 1992.[13] Later on, Microsporidia were considered a primitive protozoa, but molecular phylogenetic analysis explained that these organisms are not primitive but instead degenerate.

In 2008, Microsporidia were thought to be related to fungi as a sister group or basal branch.[14] Biologists turned their attention to the Microsporidia in silkworms and found that similar organisms globally distributed among various kinds of animals, generally invertebrates and fish, but also humans.

Recent classification in 2012 suggested that Microsporidia are a single-cell eukaryotic (protist) parasite that belong to the SAR-inclusive class or super-group.[2] The members of this group include Stramenopila, Alveolata, Foraminifera, Cercozoa, and Polycystinea.[2]

Microsporidia are eukaryotic obligate intracellular organisms with oval appearance under a microscope and present with a nuclear envelope intracytoplasmic membrane system, and a chromosome separation on a mitotic spindle. Microsporidia do not have peroxisomes but do have vesicular Golgi bodies and a primitive mitochondrial-like organelle lacking in genome termed as mitosome.[15] Characteristic of spores include their varying in shape and size, and this feature is now used to determine their taxa. The spores are refractile and coated with electron-dense, proteinaceous exospore, an electron-lucent endospore, and an inner membrane or plasmalemma.[12]

Microsporidia produce an environmentally-resistant spore due to its tubular shape which enables them to extrude its coiled, internal polar tube thereby inoculating its content into the nearby host.[8] Due to its electron-dense, glycoprotein-composed, and chitinous cell structure, microsporidian spores are relatively temperature insensitive, can survive in wide-ranging water salinization, and chemicals and persist despite long periods of dehydration.

Microsporidia are difficult to detect because of their small size, their slowly infecting properties, and sometimes asymptomatic infection. Therefore, there are many undetermined cases of diarrhea worldwide. The organism needs to be visualized using special techniques involving special laboratory facilities and trained personnel to characterize the infection.

Detection of Microsporidia is based on stool examination through microscopic observation. However, the new staining methods including trichrome stain and fluorescence staining using optical brighteners can be useful. Microsporidia can be stained with Gram stain, carbol-fuchsin stain, and with silver stains.[8]

The immunoblot, the Enzyme-Linked Immunosorbent Assay (ELISA), and Immunofluorescence Assay (IFA) that utilizes monoclonal and polyclonal antibody are also helpful serological assays for in microsporidia characterization.[8] However, serological tests are unreliable in persons with HIV due to immune deficiency.[6]

The molecular characterization including polymerase chain reaction (PCR) and nucleotide sequencing are promising highly sensitive assays with a sensitivity of more than 90% for a quick characterization of human-infected microsporidia. The array can simultaneously detect all 4 species of Microsporidia at a sensitivity of 10 spores per 100 microliters of fecal sample.[8] Within hours, the clinician can interpret the result by isolating genetic/nucleic material of Microsporidia and amplifying the certain sequence enzymatically in thermal cyclic condition and then compare it to the control. To determine the genotype of microsporidia in the infecting host, the rRNA sequence is a gold standard for further characterization.

The in vitro and in vivo assays are also developed to propagate microsporidia for study purposes. Microsporidia generally propagate in the insect cells or tissue or amplified with in vivo inoculation, for example, N. bombycis growth in ovarian tissue of Bombyx mori and N. ceranae inoculated in Apis species or the honeybee.[3] Studies show that Microsporidia from samples, including urine, sputum, bronchoalveolar lavage, feces, duodenal aspirates, conjunctival scraping, corneal biopsies, cerebrospinal fluids, muscle biopsies, and brain tissue, can grow in mammalian cell lines.[16] Parasite such as Nosema algerae, a microsporidian parasite of mosquitoes can be grown in laboratory colonies and propagated under in vitro setting in the pig's kidney cell line. In vitro cultures of fish, Microsporidia have been successfully demonstrated by using epithelial cell cultures of Aedes albopictus at 28 C. Both in vivo and in vitro assays are useful; however, these techniques require trained personnel, adequate facilities, and the right equipment.

Frequently administered drugs for treating Microsporidia infection in animal and humans include albendazole and fumagillin. In the past, organic mercury compounds like Nosemack were also tested. However, Nosemack was less effective against the parasite and more toxic to agricultural bees than fumagillin. Fumagilin has amoebicidal properties and in vivo studies show that fumagillin inhibits Nosema apis development in the honeybee. Albendazole is effective and efficient against Encephalitozoon species infecting humans and animals but has variable effectiveness against Enterocytozoon bieneusi. Albendazole inhibits the tubulin polymerization and is also used as an anthelmintic and an anti-fungal agent.[7]

Like other pathogen and infection control, Microsporidia should be managed and prevented with improved hygiene. The improved regulation of water sources, as well as monitoring of excrement in soil and water, are important to lessen waterborne disease transmission. The tight regulation and hygiene improvement procedure in food chain production or industry, including breeding, processing, storing and packaging to control food contamination and pathogen spread, are an crucial. 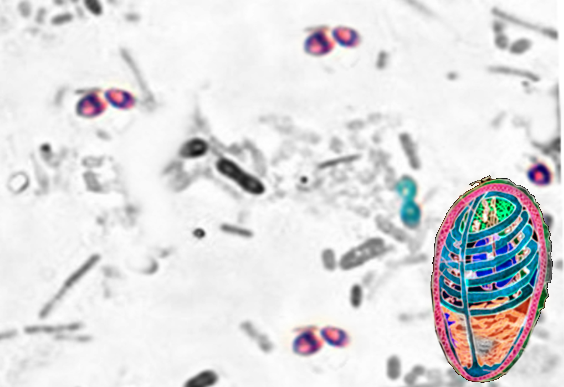