The follicular phase of the female menstrual cycle includes the maturation of ovarian follicles to prepare one of them for release during ovulation. During the same period, there are concurrent changes in the endometrium, which is why the follicular phase is also known as the proliferative phase.

The duration of the menstrual cycle varies and occurs every 21 to 35 days, with an average span of 28 days. Oligomenorrhea describes infrequent menstrual periods and cycles lasting more than 35 days. Polymenorrhea refers to frequent menstrual periods and cycles lasting less than 21 days. It is important to note that the duration of the follicular phase can differ depending on the length of the cycle, while the luteal phase is usually stable and lasts 14 days. Based on a 28-day cycle, the follicular phase measures from the first day of menstruation (day 0) until the beginning of ovulation (day 14). When the previous menstrual cycle completes, and the corpus luteum breaks down, the levels of estrogen, progesterone, and inhibin A will decrease. This chain of events will cause positive feedback to the hypothalamus and anterior pituitary, and a subsequent pulsatile release of GnRH and FSH into circulation. This increase in FSH will stimulate the granulosa cells of the ovaries to recruit several follicles from each ovary. These follicles will complete maturation, and only one Graafian follicle will go through ovulation during that cycle. The increase in FSH also stimulates the secretion of Inhibin B by the granulosa cells. Inhibin B will eventually blunt the secretion of FSH toward the end of the follicular phase. Inhibin B levels will be highest during the LH surge before ovulation, and will quickly taper off after.[1][2]

The level of FSH available can vary based on the age of the female. The functioning of the ovaries weakens with increasing age, which causes less inhibin production in the previous luteal phase. The decreased inhibin levels stimulate a larger release of FSH compared to that of a younger female. These increasing levels of FSH cause more active recruitment of ovarian follicles, which can increase the occurrence of more than one ovulation per cycle. Since the follicles get recruited at an increased rate, the overall duration of the follicular phase will decrease, and the follicle released for ovulation will be immature. Due to these age-related changes in the early follicular phase, physicians can assess suspected infertility by checking serum FSH and estradiol levels around day 3 of the cycle. Also, the ovarian reserve can be predicted by monitoring serum levels of anti-Mullerian hormone (AMH) made by the granulosa cells, as this hormone plays an important role in folliculogenesis. AMH levels can be monitored at any point during the menstrual cycle.[3][4][5]

The mid-follicular phase will begin with a rise in levels of estradiol and inhibin B produced by the ovarian follicles in response to an increase in FSH; this will result in negative feedback that will decrease the levels of FSH. It is during this time that the selection of the follicle intended for ovulation takes place. This follicle is called the dominant follicle. Different theories suggest how the dominant follicle is determined. One idea is that the follicle expressing the highest amount of FSH receptors will be the one to promote its growth and ovulate, while the other follicles are suppressed and undergo atresia. Another theory states that the anti-Mullerian hormone (AMH) plays a role in the selection of the dominant follicle.[6][7][8][9]

As the follicular phase comes to an end, estradiol levels will rapidly increase. With this increase in estradiol, the negative feedback loop will switch to positive feedback. There is no definitive answer as to why this switch in feedback happens, but suggestions are that kisspeptin neurons play a role. The positive feedback from the estradiol will stimulate the hypothalamus and the anterior pituitary, and there will be a surge in LH, signaling the end of the follicular phase and the beginning of ovulation.[11]

In addition to ovarian follicle maturation, changes also occur in the endometrium during the first 14 days of the cycle, hence the term ‘proliferative phase.’ The increasing concentrations of estradiol strongly influence the endometrial changes that happen before ovulation. The proliferative phase can subdivide into the early, mid-, and late proliferative phases. The early proliferative phase occurs right after menses, usually around day 4 to day 7. The regenerating surface of the endometrium forms a thin, linear, and echogenic layer. The glands themselves will be short, straight, and narrow with microvilli and cilia forming on the epithelial cells. Inactive glands that are still overcoming the last menstrual cycle may appear to have a cuboidal and ragged appearance. During this early phase, the closely bunched stroma will display some mitotic activity, with its cells appearing spindle-shaped. The cellular nuclei will also undergo enlargement with minimal surrounding cytoplasm. The endometrium will then progress to the mid-proliferative phase, usually around day 8 to day 10 of the cycle. These glands will be composed of columnar epithelium and will be more elongated and curved. Finally, the late proliferative phase occurs from around day 11 to day 14. During the late proliferative phase, the glands will coil and become closely packed together. These glands will be undergoing active mitosis and nuclear pseudostratification. The stratum functionalis layer (also known as the inner lining) of the endometrium will reach its maximal thickness of around 0.5 to 5mm and develop a trilaminar appearance. The trilaminar endometrium will consist of a thin inner line and an outer basil layer, both echogenic. In the middle layer will be a darker rim. The spiral arteries will elongate to provide adequate blood flow to the endometrium, to compensate for this increased endometrial thickness.[2][12]

During the proliferative phase, the cervix will concurrently go through changes in response to the increasing levels of estradiol. There are crypts or channels in the cervix that produce a watery, thin, mucoid discharge to make the vagina less acidic. The cervical canal will appear more dilated and distended on ultrasonography to accommodate the increasing amounts of cervical discharge. Overall, these endometrial and cervical changes function to create a less hostile environment for entering sperm.[13]

The median age of menarche in the United States is 12.5 years. The average female will have around 450 menstrual cycles after that. As clinicians, it is essential to have an understanding of all phases of the menstrual cycle. It is especially important to use this knowledge to educate younger patients on the normal menstrual cycle range as well as the changes they can expect their bodies to go through at various stages of the cycle. By being able to differentiate between a normal and abnormal menstrual cycle early on, the clinician can diagnose and treat any unusual patterns in subsequent cycles such as dysmenorrhea, amenorrhea, menorrhagia, infertility, and various others.[14] 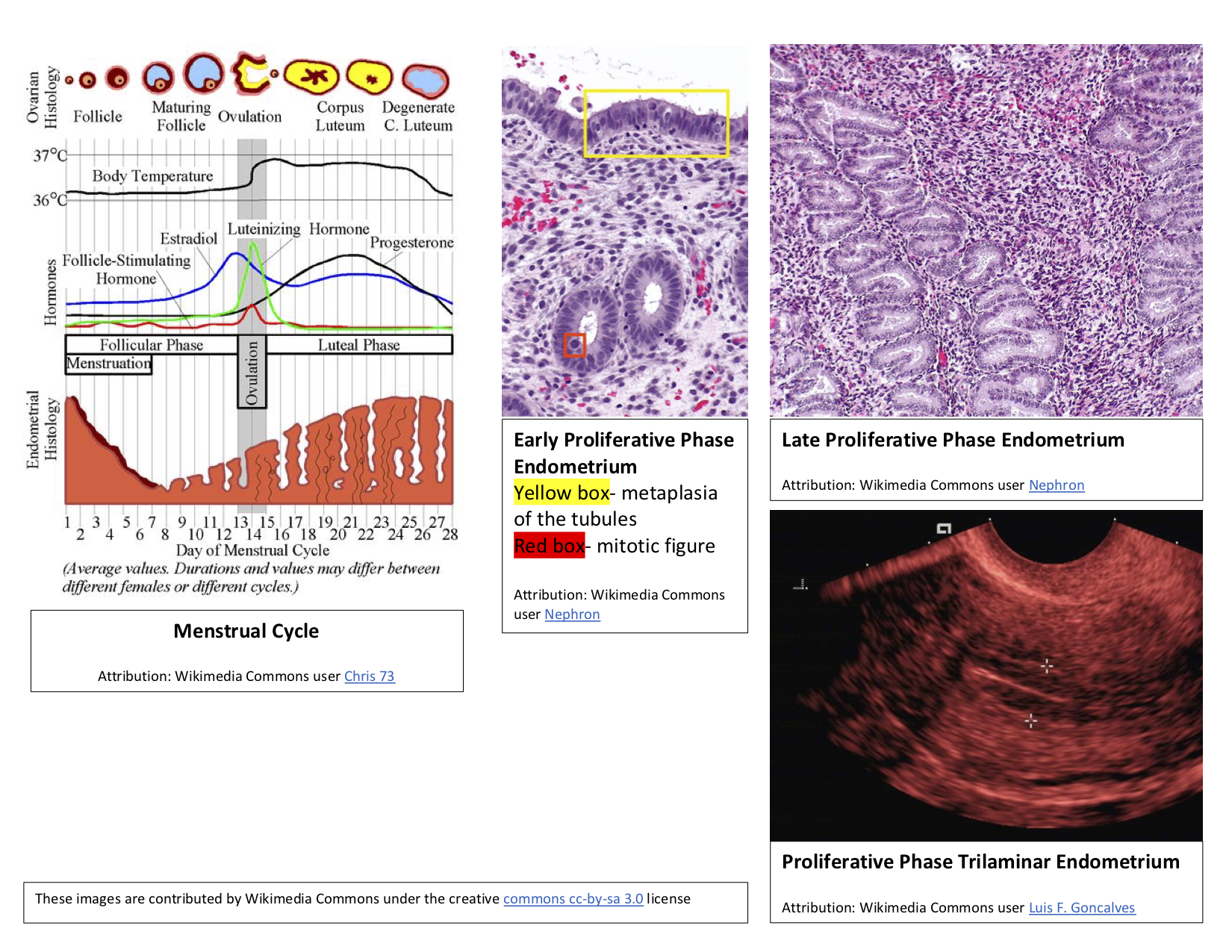 Images of the proliferative phase endometrium and the menstrual cycle.
These images are contributed by Wikimedia Commons under the creative commons cc-by-sa 3.0 license: https://creativecommons.org/licenses/by-sa/3.0/

ACOG Committee Opinion No. 651: Menstruation in Girls and Adolescents: Using the Menstrual Cycle as a Vital Sign. Obstetrics and gynecology. 2015 Dec;     [PubMed PMID: 26595586]