Cancers in the mediastinum can develop from structures that are anatomically located inside the mediastinum or that transverse through the mediastinum during development, and also from metastases or malignancies that originate elsewhere in the body.

There are many different types of mediastinal cancers. Their location in the mediastinum can further determine the causes of these cancers. [3]

Usually benign, these can become cancerous

These are derived from neural cells in any location but are commonly found in the mediastinum. These neurogenic tumors represent more than 60% of the masses found in the posterior mediastinum, are mostly found in children, and can reach a large size before becoming symptomatic. Approximately 30% of neurogenic neoplasms are malignant. They present with a large variety of both clinical and pathological features that are classified by the origin of the cell type. These are the most common cause of neurogenic mediastinal cancers and are classified as nerve sheath neoplasms (Schwannomas and Neurofibromas), these can rarely become malignant. Ganglion cell neoplasms (neuroblastomas and ganglioneuroblastomas) are malignant tumors that occur mostly in children. Paraganglionic cell neoplasms (pheochromocytomas and paragangliomas).

Metastasis from thyroid cancers can spread to the middle mediastinum.

Lung cancers can metastasize to the mediastinum either by direct extension or lymph node metastasis.

Advanced esophageal cancers can present as a mass in the mediastinum.

Mediastinal cancers are usually rare. Typically, they are diagnosed in patients aged 30 to 50 years but can develop at any age from any tissue that is located or passes through the mediastinum. Children usually present with cancers in the posterior mediastinum, while adults usually present with cancers in the anterior mediastinum. There is a similar incidence in men and women, but it can vary with the type of cancer present.[6]

There are various mediastinal cancers, and the histopathology depends upon the origin of cancer.

A detailed history and physical should be done. The history and physical examination findings usually vary by the type of mediastinal cancer, where it is located, and aggressiveness of the tumor. Some people present with no symptoms and cancers are typically found during imaging of the chest which is performed for other reasons. If symptoms are present, they are often a result of cancer compressing the surrounding structures, or symptoms from a paraneoplastic syndrome. These symptoms may include a cough, shortness of breath, chest pain, fever, chills, night sweat, coughing, hoarseness, unexplained weight loss, lymphadenopathy, coughing up blood, wheezing, or stridor.  Mediastinal masses could also be associated with abnormalities in other parts of the body (such as testicular masses with germ cell tumors). Thus, a thorough history should be taken and include a complete review of symptoms followed by a complete physical examination. In general, malignant lesions tend to be symptomatic.

Cancers in the mediastinum have a wide diversity of presentation.[7][8] The location of cancer and its composition are paramount to narrowing the differential diagnosis. The tests performed most commonly to diagnose and evaluate mediastinal cancers include:

Chest radiographs (posteroanterior and lateral) are usually the first step in the discovery of a mediastinal mass and can help localize the mass is in the anterior, posterior or medial mediastinum to help with the differentials. The mass could be an incidental finding on an asymptomatic patient who has had a chest x-ray before elective surgery or as an evaluation of an unrelated condition. It can also be done as an evaluation in patients who present with symptoms due to the mediastinal mass, or paraneoplastic syndromes. In general, malignant lesions tend to be symptomatic. However, radiography is of very limited value in characterizing mediastinal cancers.

CT Scan of the Chest

To evaluate masses seen on chest x-rays, CT scan of the chest is usually performed with intravenous (IV) contrast, which can often show its exact location, whether the mass is well circumscribed, or if it infiltrates the surrounding structures. In many cases, no further workup is needed for diagnosis. Characterization of the mass on the CT scan is based on specific attenuation of water, air, fat, calcium, soft tissue, and vascular structures. High-resolution multiplanar reformation images demonstrate the detailed anatomical relationship of cancer’s precise location, morphology, as well as its relationship to the adjacent structures.

MRI of the Chest

MRI is indicated when CT finding is equivocal. Recently, special applications of MRI have been developed to identify precisely the tissular components of mediastinal masses. Excellent soft tissue contrast makes MRI an ideal tool to evaluate cancers of the mediastinum. Chemical-shift MRI has been helpful in differentiating normal thymus and thymic hyperplasia from thymic cancers and lymphoma. Diffusion-weighted MRI (DWI), another special application that unveils minute biophysical and metabolic differences between tissues and structures. According to Gumustas et al., the mean apparent diffusion coefficient for malignant mediastinal entities could be substantially lower than that for the benign diseases.

This test collects cells from the mediastinum to determine the type of mass present for a definitive diagnosis. It is done under general anesthesia. A small incision is made under the sternum, and a small sample of tissue is removed to analyze if cancer is present. This test will help the physician determine the type of cancer present with very high sensitivity and specificity. Establishing the diagnosis of lymphoma generally requires a core biopsy for flow cytometry.

Endobronchial ultrasound has become the diagnostic procedure of choice for most of the mediastinal pathologies. Most of the mediastinal lymph node stations including station 2, 4, 7, 10, and 11 can be accessed with the help of an EBUS. Combined with EUS even other stations like 7, 8, and 9 can be accessed. EBUS can be done under conscious sedation or general anesthesia. It is usually a single-day, outpatient procedure with minimal complications. It is found to be safer than mediastinoscopy with almost similar diagnostic efficacy.

Basic Laboratory tests such as complete blood count (CBC) and basic metabolic panel (BMP) can help in the differential diagnosis of lymphomas. In the instances of mediastinal masses, tumor markers can help support a presumptive diagnosis. These include:

In suspected cases of metastasis to the mediastinum from primary testicular germ cell tumors, palpation of the testicles is not sufficient, and ultrasonography of the testicles should be performed in all patients.

Treatment of thymic cancers usually requires surgery, followed by radiation or chemotherapy. Surgery is the initial treatment in patients who present with tumors invading readily resectable structures like the mediastinal pleura, pericardium or adjacent lung. A resected specimen will then be sent for histopathologic examination for staging and to determine if postoperative radiotherapy or chemotherapy are required. The ability to completely resect the thymic carcinoma is dependent on the degree of invasion and/or adherence to surrounding structures. Sometimes to achieve complete resection with histologically negative margins, the pericardium and surrounding lung parenchyma are also removed. Types of surgery which are being performed include thoracoscopy (minimally invasive), mediastinoscopy (minimally invasive), and thoracotomy (performed by making an incision in the chest). In patients for whom complete resection is not feasible as the initial treatment, for example, those with cancer invasion into the innominate vein, phrenic nerve, heart, or great vessels, therapy involving preoperative chemotherapy and postoperative radiotherapy is indicated. If neoadjuvant chemotherapy allows for a partial or complete response, these cancers are considered potentially resectable, and patients should be reevaluated following therapy. If complete resection cannot be accomplished with surgery, these patients should undergo maximum debulking followed by radiotherapy postoperatively if technically feasible. This may control the residual disease. For unresectable cancers, systemic therapy, radiotherapy, or chemoradiotherapy may be recommended in patients who have extensive pleural/pericardial metastases, unreconstructable great vessel invasion, heart, tracheal involvement, or distant metastases. Although there are no clinical trials providing evidence of the benefit of surveillance after treatment, monitoring with thoracic imaging is warranted given early intervention may be more effective. The National Comprehensive Cancer Network recommends a CT scan every 6 months for 2 years, then annually for 5 years. The prognosis for patients with thymic carcinoma depends on the stage of disease, complete resectability, and histologic type.[12]

Treatment depends on the type of lymphoma, its stage, and metastases. Most lymphomas are generally treated with chemotherapy followed by radiation.[13]

Surgery is the preferred treatment for malignant neurogenic tumors. Procedures include a post-lateral thoracotomy which can give the surgeon good exposure to the tumor, and more recently video-assisted thoracic surgery (VATS). VATS is a minimally invasive procedure that inserts a thoracoscope and surgical instruments through small incisions in the chest. This procedure decreases the access trauma and gives a good view, especially for smaller posterior mediastinal neurogenic tumors, but is not ideal for giant mediastinal neurogenic tumors because of their huge volume. For dumbbell neurogenic tumors, sufficient preoperative evaluation is required of the intraspinal part of the tumor to prevent uncontrollable hemorrhage during surgery. Cooperation of a thoracic surgeon with a neurosurgeon is recommended for this procedure. For malignant mediastinal neurogenic tumors, the five-year survival rate is low and complete resection is rarely possible. There is frequent use of radiation in conjunction with chemotherapy before surgery to decrease the size of the tumor or after to treat the margin of the resection bed.

Management of mediastinal germ cell tumors varies with the type of tumor present. It may include chemotherapy, surgery, radiotherapy, or a combination of these treatments.

The prognosis depends on the cause and response to treatment.

Cancers in the mediastinum can develop from structures that are anatomically located inside the mediastinum or that transverse through the mediastinum during development, and also from metastases or malignancies that originate elsewhere in the body.

Mediastinal cancers are usually rare. Typically, they are diagnosed in patients aged 30 to 50 years but can develop at any age from any tissue that is located or passes through the mediastinum.

There is a similar incidence in men and women, but it can vary with the type of cancer present.

There are many lesions that can occur in the mediastinum and making a diagnosis can be challenging. an interprofessional approach consisting of a physician assistant, nurse practitioner, primary care physician, oncologist, radiologist, thoracic surgeon, anesthesiologist, and intensivist is recommended. Placing these individuals under general anesthesia also has the potential to cause respiratory obstruction and cardiovascular collapse, because of the mass effect on the trachea. Anyone looking after patients with a mediastinal mass should follow the recommendations on diagnosis, treatment, and post-treatment care.

Specialty trained nurses should educate the patient and the family on the lesions and their post-treatment care. Some lesions like lymphoma may be treated with radiation, whereas most other lesions require surgery and/or chemotherapy. In the postoperative period, these patients need pain control, incentive spirometry and ambulation to prevent the early complications. The perianesthesia, critical care, and medical-surgical nurses should monitor the patient and inform the team about major changes or issues. Pharmacists should evaluate medication choices, drug interactions, and provide education to the patients when appropriate. [14][15](Level V)

The outcomes for most localized lesions of the mediastinum in children and adults are good. However, if the lesions are large and invade local tissues, surgery may require the removal of important tissues like the phrenic nerve and innominate vein. Only via an intradisciplinary approach and communication with the different specialist can the morbidity of surgery and treatment be decreased.[16][17][18] (Level V) 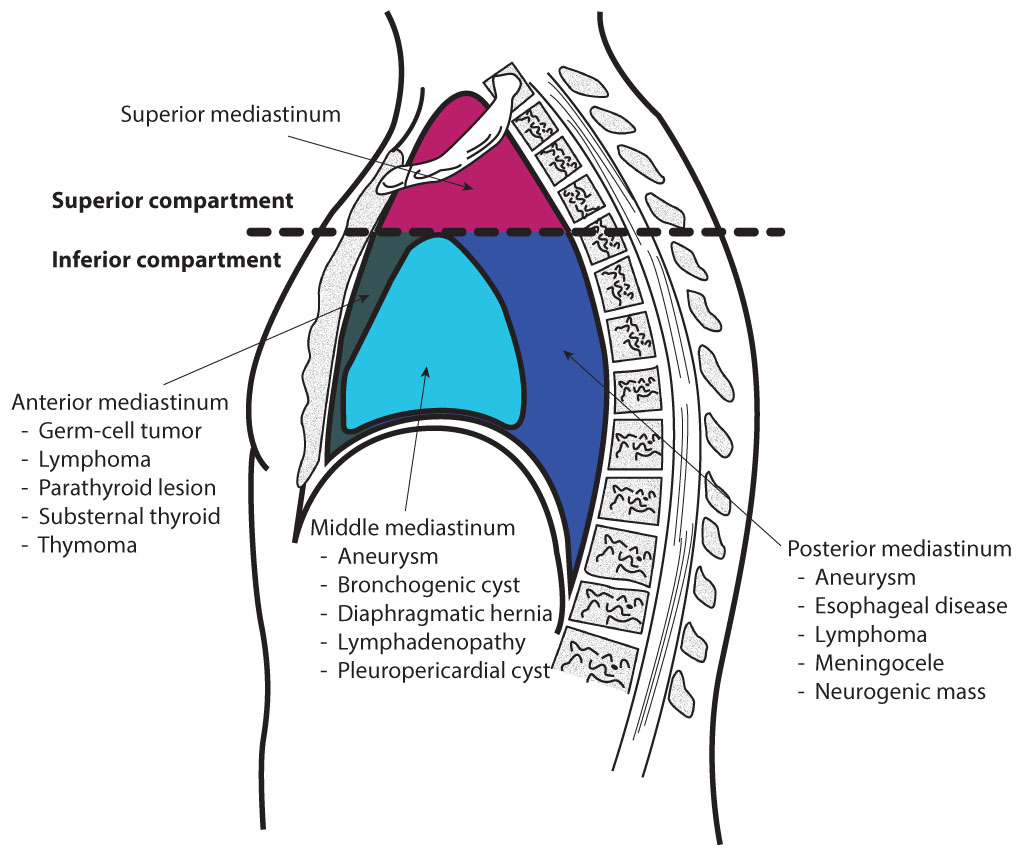