Meconium Ileus (MI) is one of the earliest manifestations of cystic fibrosis (CF) and presents in up to 20 percent of infants with CF. The inspissated meconium obstructs the small intestine at the level of the terminal ileum. If left untreated, the prognosis is poor. This activity illustrates the evaluation, treatment, and complications of meconium ileus and the importance of an interprofessional team approach to the management of neonates with cystic fibrosis.

In neonates, meconium Ileus (MI) is one of the earliest manifestations in patients with cystic fibrosis (CF). It presents in up to 20% of patients with CF. The inspissated meconium obstructs the small intestine at the level of the terminal ileum. If left untreated, the prognosis is poor.[1]

Previous studies have suggested that 80-90% of infants with MI have CF.[2] Few studies also suggest that low birth weight infants are at an increased risk for non-CF MI.[3]

Meconium ileus is seen only in a subset of patients with CF. Earlier studies have documented the prevalence of about 14% in Canada and Italy with the United States having up to 20%.[4]

In patients with meconium ileus, bowel lumen obstruction by thick, adhesive, and desiccated meconium is present. It presents in two forms, simple or complex MI. In simple MI, the viscid meconium obstructs the terminal ileum, and the small intestine proximal to the obstruction site dilates with meconium, gas, and fluid. In complex MI, the meconium-distended segments of the small intestine may give rise to complications like prenatal volvulus, ischemic necrosis, intestinal atresia, or perforation and extrusion of the meconium into the peritoneum.[1]

If not identified prenatally, infants present with intestinal obstruction within hours of birth. Bilious emesis with or without abdominal distension occurs at the time of initiation of feeds. Abdominal distention may also be severe enough to cause respiratory distress. Those that develop meconium peritonitis will additionally present with abdominal tenderness, fever, and shock.[1]

The American College of Obstetrics and Gynecology recommends that all women of reproductive age group irrespective of ethnicity should be offered preconception and prenatal CF carrier screening as a routine part of obstetric care.[5]

Antenatal diagnosis of meconium ileus is possible based on sonographic features suggesting hyperechoic masses (inspissated meconium in the terminal ileum), dilated bowel, and non-visualization of the gallbladder. The diagnosis then groups according to the risk factors associated. Sonographic features of MI seen on routine prenatal ultrasound in a mother with a negative CF carrier screen is low risk while those seen in parents who are known CF carriers and all pregnancies following the birth of a CF-affected child are considered high risk.

In the second and third trimesters, fetal meconium is normally hypoechoic or isoechoic to adjacent abdominal structures, while MI presents as a hyperechoic mass that has a sonographic density greater than that of bone or liver. After detecting a hyperechoic bowel on ultrasound, the fetus requires a followup ultrasound every 6 weeks or less. Also, a perinatologist consultation is recommended so that the planned delivery can be at a tertiary care center that has an experienced neonatal intensive care unit (NICU) team along with a pediatric surgeon.

An infant that presents with bilious emesis is assumed to have a small bowel obstruction (SBO). The determination of etiology is by ordering both flat and upright abdominal films. In MI, dilated loops of bowel with or without air-fluid levels are present on the abdominal films. When meconium mixes with swallowed air, the classic “soap-bubble” sign can show in the distal small intestine. If there has been a contained or previously open intestinal perforation, abdominal calcifications may also be present. In the case of complete obstruction, air will be absent in the rectum.

A diagnostic contrast enema should be ordered in a stable infant to detect a microcolon due to disuse below the obstruction in the terminal ileum. It also helps to identify malrotation by localizing the cecum’s position. If malrotation is suspected, an upper gastrointestinal series needs to be done to confirm the diagnosis and to better evaluate for midgut volvulus. Also, a pediatric surgeon should be consulted to confirm the diagnosis.

If the infant is hemodynamically unstable or has a distended abdomen with peritoneal signs on physical exam, a complex MI should be suspected, and the infant should immediately get transferred to the operating room.[1]

The infant should also have a sweat test to confirm or rule out the diagnosis of cystic fibrosis (CF). Since MI in CF patients usually correlates with pancreatic insufficiency, a fecal elastase test should also be performed to evaluate pancreatic function.[6]

Any infant that presents with bilious emesis with or without abdominal distention should undergo initial stabilization that includes ordering nothing by mouth, establishing intravenous access to provide adequate hydration to maintain good perfusion, mechanical respiratory support, correction of any coagulation disorders, and empirical antibiotic coverage. Placement of a nasogastric tube will decompress the stomach and proximal small intestine as well as reduce the risk of aspiration from bilious emesis. Laboratory investigations that include electrolytes, hemoglobin, white blood cell count, and lactate will further help to determine the clinical status of the infant.[1][6]

Non-operative management includes the use of therapeutic enemas. The most commonly used agent is meglumine diatrizoate that contains 0.1% polysorbate 80 and 37% organically bound iodine. It is a hyperosmolar, water-soluble, and a radiopaque solution having an osmolarity of 1900 mOsm/L. Under fluoroscopic guidance, a 25% to 50% solution of meglumine diatrizoate at low hydrostatic pressure is infused slowly through a catheter inserted into the rectum. Upon placement, fluid is osmotically drawn into the intestinal lumen, hydrating and softening the meconium mass; subsequently followed by transient osmotic diarrhea and diuresis. The catheter is withdrawn, and an abdominal radiograph is necessary to rule out perforation.[6] Historically, 1% N-acetylcysteine was added to the enema solution to aid in the dissolution of the inspissated meconium.[7] However, for further evacuation of meconium, warm saline rectally every 12 to 24 hours is preferred due to the increased risk of aspiration and chemical pneumonitis from using N-acetylcysteine.[1]

Usually, there is a rapid passage of semiliquid meconium, which continues over the next 24 to 48 hours. In the absence of clinical indications, radiographs should be taken every 8 to 12 hours to confirm evacuation of the obstruction and also to exclude late perforation. Reflux of the enema into the terminal ileum is critical for the bowel obstruction to be relieved.[8] In the absence of reflux or the case of incomplete evacuation, a second enema may be necessary. Serial meglumine diatrizoate enemas can be performed at 12-24 hour intervals if needed. Adequate fluid resuscitation (>150 mL/kg per day) with anticipation of fluid losses due to osmotic diarrhea and diuresis is necessary.[6]

Late perforation can be caused by severe bowel distension by osmotically drawn fluid into the intestine or by the contrast medium directly injuring the bowel mucosa. Hypertonic enemas may lead to hypovolemic shock. Carefully placing the catheter under fluoroscopic guidance and avoiding the inflation of balloon-tipped catheters reduces the risk of colonic or rectal perforation.

Neonates with CF and MI undergoing barium enema have demonstrated a microcolon.[9] Therefore catheters should be inflated at a lower pressure. Overdistention can also lead to ischemia which can be worsened by hypovolemia induced hypoperfusion owing to poor fluid resuscitation. However, patients with uncomplicated MI, treated with Gastrografin enemas have shown a success rate over 80%.

The objectives of operative management include the evacuation of meconium from the intestine, the establishment of intestinal continuity, and preservation of maximal intestinal length. However, no large-scale studies yet exist to identify the best procedure for the surgical treatment of MI.

The following are previously attempted procedures:

Post-operative care should primarily focus on fluid replacement. The fluid losses from preoperative diarrhea and diuresis, if using meglumine diatrizoate enema, and from surgical losses must be carefully replaced. Ongoing maintenance fluids and replacement of insensible fluids, as well as gastrointestinal losses (nasogastric suction and ileostomy), must be adjusted accordingly. N-acetylcysteine administration via a nasogastric tube or ileostomy may help solubilize residual meconium. Stomas placed in the course of surgical management should be closed in 6-12 weeks to help avoid prolonged problems with fluid, electrolyte, and nutritional losses.

Breast milk or routine infant formula along with pancreatic enzyme replacement therapy (PERT) and vitamins may be given to infants with uncomplicated meconium ileus. Total parenteral nutrition (TPN) or continuous enteral feedings are given to those with a complicated surgical course. Feedings should begin with low volume, half strength, predigested, and diluted formula as stasis may have damaged the bowel mucosa. Signs for feeding intolerance (abdominal distention, heme-positive stools, and or increasing emesis) should be looked for while gradually increasing the strength and volume of feeds.

Spot urinary sodium to creatinine ratio is a more sensitive measure of sodium status (with a goal of 17 to 52 mmol/mmol) especially in infants with significant bowel resection with or without an ileostomy as there is excessive loss of sodium and fluid. Patients with CF are additionally at risk of hyponatremia due to excessive sweat and intestinal sodium losses.

The goal should be to take down ostomies at the earliest, but in the meantime, ostomy-drip feeds of glutamine-enriched formula may be given at low volumes to enhance bowel growth, to reduce bacterial translocation and TPN associated hepatic injury. Infants with MI are also at an increased risk of neonatal cholestasis thus requiring weekly monitoring of liver function.[6]

Bowel dilation seen in MI also presents in the following [11]

Sonographic features of fetal bowel obstruction are neither sensitive nor specific for meconium ileus. Therefore, the risk of the fetus of having cystic fibrosis should be a consideration at the time of interpretation.

In infants, MI will require differentiation from the following conditions [1]

The prognosis for infants presenting with both simple and complicated meconium ileus has improved with the advancement of both non-operative and operative treatments, along with good nutritional support and better treatment of bacterial infections.

The American College of Obstetrics and Gynecology recommends that all women of reproductive age group irrespective of ethnicity should be offered preconception and prenatal CF carrier screening as a routine part of obstetric care.

Our goals in the future should be to find ways to reduce perinatal complications thus reducing morbidity, mortality, and the cost of medical care. Also, once meconium ileus is detected prenatally, we should formulate treatment strategies that can prevent the progression of simple MI to complex MI. 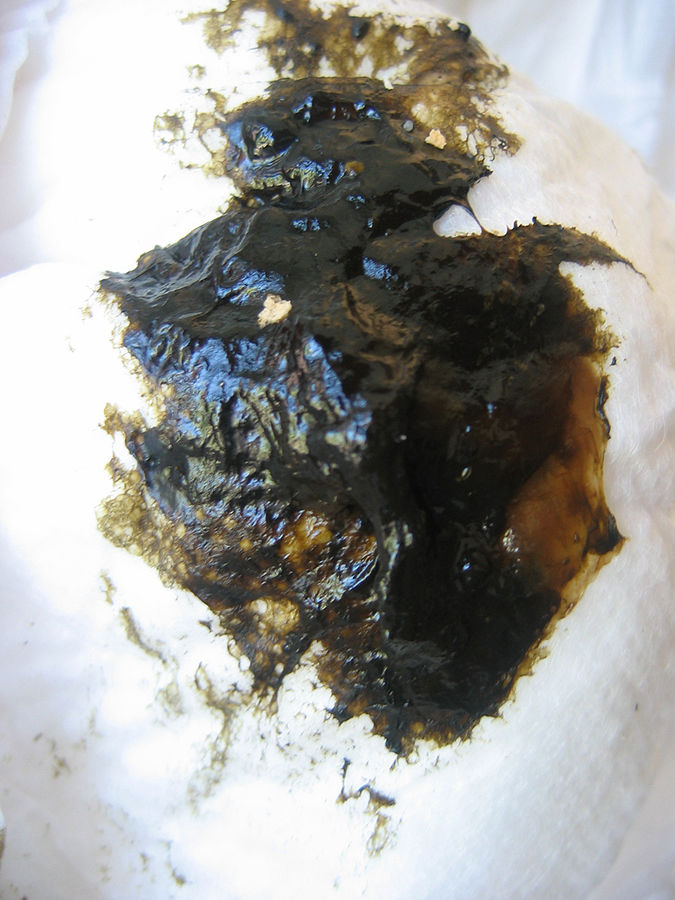 Gorter RR,Karimi A,Sleeboom C,Kneepkens CM,Heij HA, Clinical and genetic characteristics of meconium ileus in newborns with and without cystic fibrosis. Journal of pediatric gastroenterology and nutrition. 2010 May     [PubMed PMID: 20386322]

Carlyle BE,Borowitz DS,Glick PL, A review of pathophysiology and management of fetuses and neonates with meconium ileus for the pediatric surgeon. Journal of pediatric surgery. 2012 Apr     [PubMed PMID: 22498395]