The mandible is the largest bone in the human skull. It holds the lower teeth in place, it assists in mastication and forms the lower jawline.  The mandible is composed of the body and the ramus and is located inferior to the maxilla. The body is a horizontally curved portion that creates the lower jawline. The rami are two vertical processes located on either side of the body; they join the body at the angle of the mandible. At the superior aspect of each ramus, the coronoid and condylar processes articulate with the temporal bone to create the temporomandibular joint which permits mobility. Other than the ossicles of the ear, the mandible is the only skull bone that is mobile, allowing the bone to contribute to mastication.

The mandible is made up of the following parts: the body and two rami.

The body is the anterior portion of the mandible and is bound by two surfaces and two borders.  The body ends and the rami begin on either side at the angle of the mandible, also known as the gonial angle.

The coronoid process is located at the superior aspect of the ramus. Its anterior border is continuous with that of the ramus, and its posterior border creates the anterior boundary of the mandibular notch. The temporalis muscle and masseter insert on its lateral surface.

The condyloid process is also located at the superior aspect of the ramus and is divided into two parts, the neck and the condyle. The neck is the thinner portion of the condyloid process that projects from the ramus. The condyle is the most superior portion and contributes to the temporomandibular junction by articulating with the articular disk.

Muscles Originating from the Mandible

Muscles Inserting on the Mandible

Males generally have squarer, more prominent mandibles than females. This is due to the larger size of the mental protuberance in males and the decreased gonial angle. The gonial angle is 90 degrees in males, compared to 110 in females.

In rare instances, a bifid or trifid inferior alveolar canal may be present.  This can be detected on X-ray as a second or third mandibular canal. Branches of the inferior alveolar nerve commonly run through these extra foramina and can confer a risk for inadequate anesthesia during surgical procedures involving the mandible.[4]

A cleft chin can result from inadequate or absent fusion of the mandibular symphysis during embryonic development. This often results in a depression of the overlying soft tissue at the midline of the mandible. This is a genetic condition that is inherited in an autosomal dominant fashion and found more frequently in the male population.[5]

Mandible osteotomy is performed on patients with micrognathia, a condition in which the mandible is undersized. Micrognathia may result in pain and difficulty chewing: correction is often needed.  This procedure is performed by transecting the mandible between the first and second molars, bilaterally; the mandible is extended into its new position and stabilized with hardware.

Sagittal split osteotomy is performed on patients with prognathism, a condition in which the mandible is oversized, causing an underbite.  This procedure is performed by transecting the mandible bilaterally, repositioning it in a more posterior position, and stabilizing it with hardware.

Complications include postoperative facial numbness due to nerve damage. Recovery from nerve damage typically occurs within 3 months of the procedure.

Mandibular fractures are most commonly caused by trauma and typically occur in two places. The parasymphysis is especially prone to fracture due to the incisive fossa and mental foramen. A direct blow to the mandible may cause a condylar neck fracture as the articular disk of the temporomandibular joint prevents it from moving posteriorly.[6]

In patients with traumatic mandibular injuries, a standard four-view series of X-ray film may be obtained. In many cases, due to superimposed anatomy, mandibular series do not provide sufficient detail to accurately diagnose condylar fractures. This issue can is solved by using a reversed Towne view for imaging. Newer modalities such as CT scans have proven more sensitive than X-ray and are commonly employed.[7]

Dislocation of the mandible is most frequently in the posterior direction, but anterior and inferior dislocations may be observed. The patient may present with the inability to close his or her mouth or with an asymmetric jawline. Previous dislocation is the greatest risk factor.  Manual reduction is often used to correct the injury. Barton bandages are used after reduction to hold the jaw in place and provide stabilization.

The mandible is a vital bone in terms of forensic evidence. Because the mandible progressively changes over an individual’s life, it is routinely used to determine the age of the deceased. 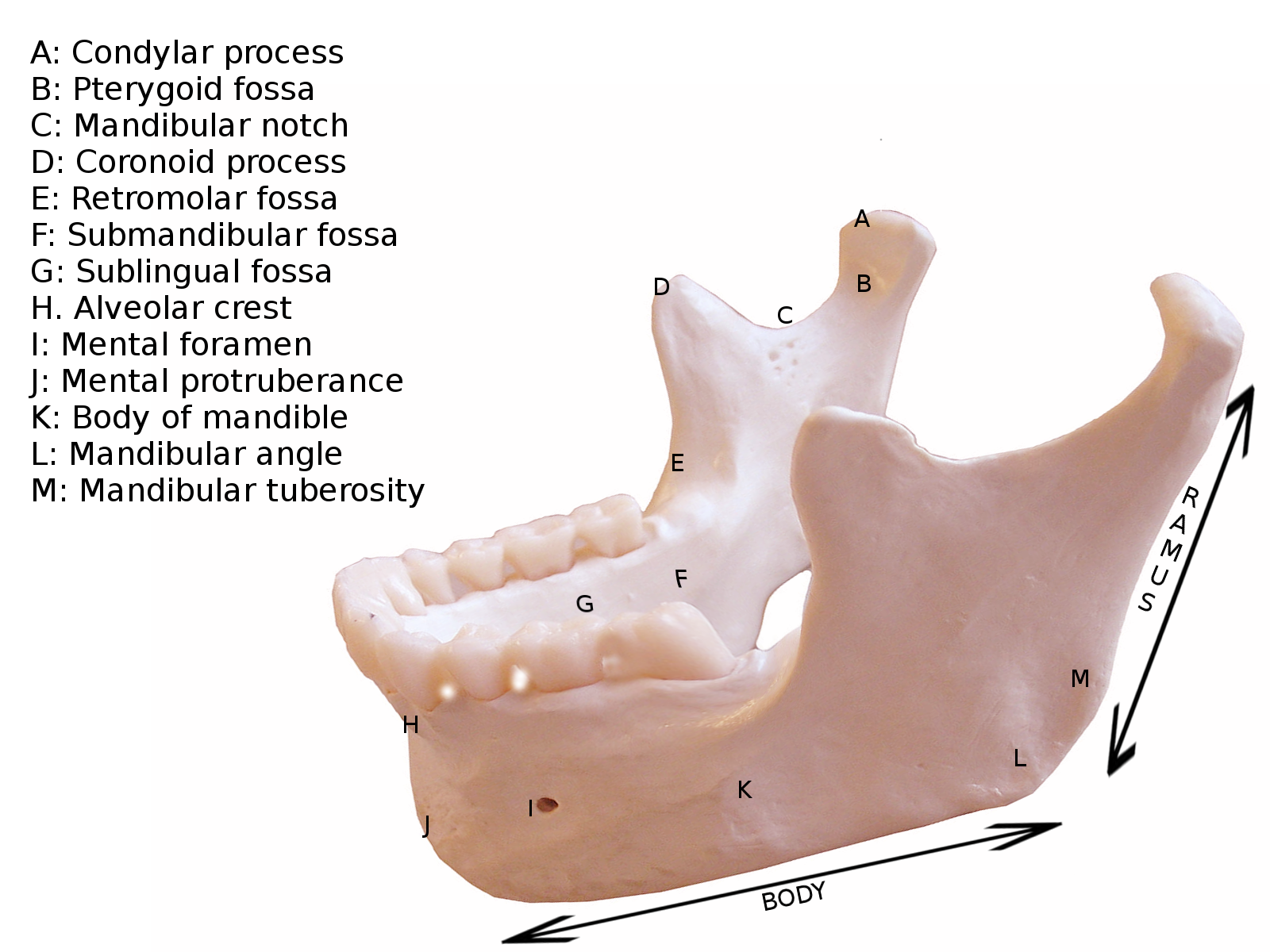