Lown-Ganong-Levine (LGL) pattern is a rare pre-excitation pathway that may present on EKG in patients of various ages. Occasionally, tachyarrhythmias may develop that are associated with the presence of a suspected bypass tract. A patient typically sees symptomatic improvement with medical management utilizing antiarrhythmics and if refractory, radiofrequency ablation. This activity reviews the evaluation and treatment of LGL patterns and highlights the role of the interprofessional team in evaluating and treating patients with this condition.

Pre-excitation is a term that refers to the premature activation of the ventricles. Previously used when referring to Wolff-Parkinson-White (WPW), pre-excitation has been expanded to include any rhythm with antegrade ventricular or retrograde atrial activation via an accessory pathway. These pathways may be partially or completely separate from the normal conduction system. The Lown-Ganong-Levine (LGL) pattern was described in 1952 by Bernard Lown, William Francis Ganong, and Samual Levine and is theorized to involve an accessory pathway that partially or completely bypasses the atrioventricular (AV) node resulting in the direct activation of the bundle of His by the sinoatrial (SA) node.

Wolff-Parkinson-White (WPW) is commonly recognized as the classic example of pre-excitation, characterized by the presence of a delta wave with the presence of a short PR interval and a broad QRS complex on ECG. Multiple studies have evaluated the underlying pathway for WPW, which researchers call the bundle of Kent. The bundle of Kent takes the form of myocytes that bypass the AV node junction resulting in the direct activation of the ventricular myocardium by the accessory pathway. The current theory is that Lown-Ganong-Levine syndrome may result from multiple underlying causes involving pathways that partially or completely bypass the AV node with subsequent normal conduction down the bundle of His. While WPW is commonly associated with the findings of a delta wave, this finding is typically absent in the Lown-Ganong-Levine pattern which only displays a short PR interval and a normal QRS complex on ECG.

The Lown-Ganong-Levine pattern has been reported in a wide age range of patients and has not been shown to display increased incidence in one particular sex or ethnic background. Bernard Lown, William Francis Ganong, and Samual Levine’s initial retrospective study found nearly 200 electrocardiograms (EKG) of 13500 evaluated revealing with a short PR interval, with normal QRS complex correlating to a prevalence of just over 1%. Further evaluation has determined that the incidence of paroxysmal supraventricular tachycardia in Lown-Ganong-Levine patients is significantly higher nearing 11%. This number compares to an incidence of less than 0.5% in the general population without shortened PR intervals.[1]

Unlike other pre-excitation syndromes, there is no research currently available that explains well the pathophysiology underlying Lown-Ganong-Levine (LGL) syndrome. Previously, Lown-Ganong-Levine was thought to utilize the bundle of James, which is an accessory pathway connecting the atria to the distal segments of the AV nodes or the proximal bundle of His. However, studies have been unable to isolate a unique pathway in multiple individuals.[2] As a result, the current theory is that LGL may result from numerous underlying causes involving pathways that partially or wholly bypass the AV node with subsequent normal conduction down the bundle of His.

Other potential anatomic tracts by which the Lown-Ganong-Levine pattern may occur include Brechenmacher fibers or intranodal bypass tracts. Brechenmacher fibers are quite rare, reported in less than 0.03% of patients, and research has yet to establish a clinical link to the Lown-Ganong-Levine pattern. Regardless, these fibers are theorized to serve as bypass tracts that run from the atrium to the bundle of His and as a result, are considered to represent a potential cause of LGL. Intranodal bypass tracts are anatomically located with the AV node but allow for rapid conduction through the AV node. As a result, there are also proposals for intranodal bypass tracts as a cause of the LGL pattern.

Findings that may be associated with the history and physical in patients with Lown-Ganong-Levine are rather scarce. Occasionally, while taking a history, some patients will note occasional palpitations or endorse a prior history of paroxysmal atrial fibrillation or other atrial arrhythmias. On physical exam, again, findings are limited in LGL. During cardiac auscultation or palpating pulses, the examiner could potentially sense the irregular rhythm with a change of underlying rhythm. The diagnosis of LGL requires the use of a resting EKG, where these patients typically display a pattern of short PR interval but normal QRS complex duration.

The presence of the Lown-Ganong-Levine pattern is typically detected or suspected utilizing electrocardiogram (EKG) with a characteristic pattern of a short PR interval and normal QRS complex. These findings may also represent the presence of enhanced AV nodal conduction (EAVNC). While the LGL pattern is typically a clinical diagnosis utilizing an EKG in conjunction with history and physical, the diagnosis of EAVNC usually requires electrophysiologic (EP) evaluation. The finding of a short PR interval and the normal QRS complex is thought to be the result of a perinodal accessory pathway utilizing the bundle of James. Routine laboratory evaluation, including hormone levels (thyroid-stimulating hormone) and electrolytes (potassium or magnesium), may require monitoring; however, replacement in deficiency has not at this time been shown to affect the Lown-Ganong-Levine pattern. Vagal maneuvers have previously demonstrated accentuation of a variety of arrhythmias and may be an option; their use in the identification of LGL patterns has not been studied at this time. In most other suspected arrhythmias, Holter monitors or implantable loop recorders may be utilized to evaluate for the presence of conduction abnormalities. While use has not previously been a target of research in the evaluation of LGL, outpatient ambulatory monitoring with Holter monitors of loop recorders should be a decision left to the discretion of the treating physician.

Treatment of Lown-Ganong-Levine currently is centered around the use of antiarrhythmic medications and, when refractory, radiofrequency catheter ablation. Emergency treatment is not typically necessary as the LGL pattern itself has no established correlations with hemodynamic compromise. Instead, treatment focuses on the prevention of tachyarrhythmias via the accessory pathway. Medications utilized previously include digitalis, beta-blockers, calcium channel blockers (CCB), and either class I or III antiarrhythmics. Digitalis, beta-blockers, and CCB are thought to aid in controlling LGL by slowing AV nodal conduction and prolonging the refractory period. At this time, minimal randomized control trials have taken place, and the data regarding the management of LGL in reported cases has been controversial.[3][4][5][6] One report from the late 1980s suggested that the AV nodal conduction in patients with LGL is less influence by calcium channels and parasympathetic tone and as a result, medications that block sodium channels such as sotalol or amiodarone may be more effective.

In cases refractory to medical therapy, as with other supraventricular tachycardias or accessory pathways, radiofrequency catheter ablation has become a preferred treatment. Patients who display reentrant tachycardia with short PR intervals may benefit from an accessory pathway or partial AV nodal ablation. In a patient with atrial flutter or fibrillation and rapid ventricular response suspected to be secondary to LGL, complete heart block is inducable via RFA followed by implantation of a pacemaker.[7]

The differential diagnosis for Lown-Ganong-Levine would include supraventricular tachycardia, atrial fibrillation or flutter with a rapid ventricular response, AV nodal reentry tachycardia or other tachyarrhythmias that utilize accessory pathways such as Wolf-Parkinson-White.

Prognosis appears to be good in patients with Lown-Ganong-Levine syndrome. While patients with LGL patterns are typically asymptomatic, due to a propensity to develop atrial fibrillation, atrial flutter, AVRT, or another tachyarrhythmia, these patients have been known to report palpitations or other associated symptoms. As a result, they are often considered to be at similar risk for stroke or other associated complications as patients with these tachyarrhythmias. In rare cases, there have been suggestions regarding the development of more concerning rhythms such as ventricular tachycardia.[8][9][10]

Patients with Lown-Ganong-Levine pattern on EKG are at an increased risk of developing tachyarrhythmias. Certain medications that enhance conduction through the AV node make AVRT, and some atrial tachycardias occur; this is thought to occur due to alteration in the conduction and refractoriness of the AV node or atrial myocardium. As a result, some medications, such as sympathomimetics, should be utilized with caution in these patients.

Patients with suspected Lown-Ganong-Levine may benefit from consultation by general cardiology and, if available, electrophysiology for the evaluation of potential bypass tracts within the conduction system.

At this time, are no proposed methods by which to reduce a patient's risk of the Lown-Ganong-Levine (LGL) pattern as it is theorized to be secondary to anatomical variation. Clinicians should counsel patients regarding the presence of an accessory pathway that has the potential to create arrhythmias via partially or entirely bypassing the atrioventricular (AV) node resulting in the direct activation of the bundle of His by the sinoatrial (SA) node. The diagnosis of LGL requires the use of a resting EKG, where these patients typically display a pattern of short PR interval but normal QRS complex duration, however, electrophysiology should be consulted to evaluate for the presence of a bypass tract within the conduction system.

The description of the Lown-Ganong-Levine pattern is as an accessory pathway that partially or wholly bypasses the atrioventricular (AV) node resulting in the direct activation of the bundle of His by the sinoatrial (SA) node. Findings associated with a routine history and physical are rather scarce. The diagnosis of LGL requires the use of a resting EKG, where these patients typically display a pattern of short PR interval but normal QRS complex duration.

The diagnosis of the Lown-Ganong-Levine (LGL) pattern requires a highly specialized level of clinical knowledge and suspicion. LGL pattern is suspected to occur in less than 1% of the population, and not all patients experience associated symptoms. [Level 4] Currently, very little is known in regards to the LGL pattern, and it is rarely studied or recognized. It is theorized to be secondary to anatomical variation, resulting due to the presence of an accessory pathway that has the potential to create arrhythmias by partially or completely bypassing the atrioventricular (AV) node resulting in the direct activation of the bundle of His by the sinoatrial (SA) node. [Level 5] The diagnosis of LGL requires the use of a resting EKG, where these patients typically display a pattern of short PR interval but normal QRS complex duration, however, electrophysiology should be consulted to evaluate for the presence of a bypass tract within the conduction system.

Cardiology specialty nursing staff trained in telemetry may aid in the diagnosis of Lown-Ganong-Levine pattern if patients with associated symptoms of palpitations or lightheadedness are found to display LGL pattern on telemetry, and can assist in monitoring and assessing treatment effectiveness once the treating physician has initiated therapy. The healthcare team should also include a specialized cardiology pharmacist who can consult regarding anti-arrhythmic pharmaceutical therapy, verifying dosing, offering alternative agents as options if initial treatment is ineffective, and checking for drug-drug interactions. Nurses, pharmacists, and other ancillary staff should have the freedom to voice concerns to the physicians and specialists on the case, ensuring they have a voice at the table in contributing to the overall success of the interprofessional team in directing patient outcomes positively. [Level 5] 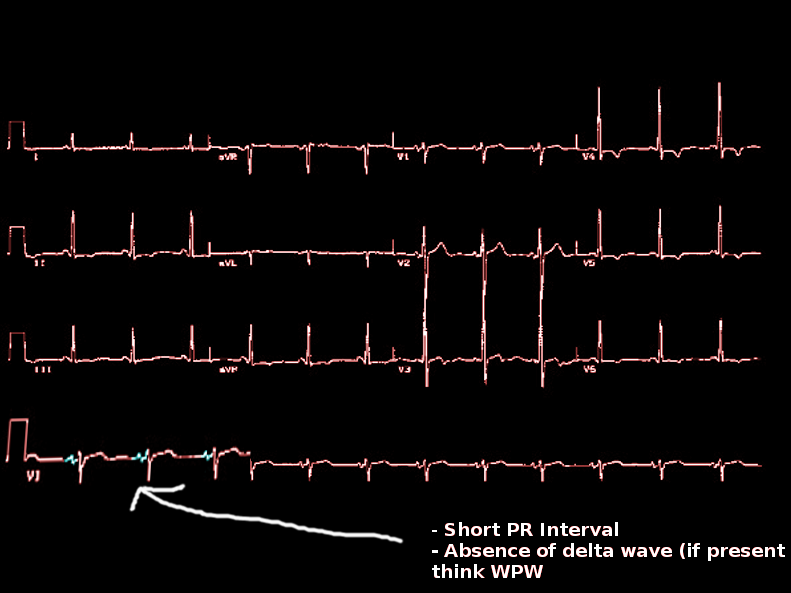 Moleiro F,Mendoza IJ,Medina-Ravell V,Castellanos A,Myerburg RJ, One to one atrioventricular conduction during atrial pacing at rates of 300/minute in absence of Wolff-Parkinson-White Syndrome. The American journal of cardiology. 1981 Oct;     [PubMed PMID: 7025605]