The first needle biopsy of the liver was reported to have been done by Paul Ehrlich in 1883. Liver biopsy remains the gold standard in the diagnosis of several liver disorders.[1][2][3] With refinement in techniques, it has emerged as a safe, useful tool for hepatologists managing the gamut of liver pathologies.

Increased risk of bleeding: In general liver biopsy is not attempted if INR greater than 1.5 or platelet count is less than 60,000. Such patients may require correction of abnormal parameters before attempting biopsy.

Vascular tumors of the liver: Liver biopsy is associated with an increased risk of bleeding in presumed vascular tumors.

Ascites: Percutaneous biopsy is difficult and associated with increased risk of complications in the setting of ascites. The transvenous route is preferred.

Morbid obesity: The procedure is much more challenging in morbidly obese patients due to interference by adipose tissue. The transvenous route is preferred.

Devices: There are two types of needles: aspiration or cutting needles. Newer, automated versions of these needles are also available. 16-18 gauge needles are most commonly used. Suction with a syringe is typically applied to obtain liver core tissue while using aspiration needles. This can result in fragmentation and inadequate specimen especially in patients with underlying cirrhosis.

Some cutting type have a needle, and outer cutting sheath, which when propelled beyond the needle cuts and traps tissue within the needle hollow. There are better sampling and less fragmentation of tissue by using the cutting technique, while the procedure is quicker with less risk for complications using the aspiration technique.

Most liver biopsies are now done on an outpatient basis. However, the outpatient center where a liver biopsy is done should ideally have an easy provision in place for an inpatient stay, laboratory, and blood bank services.  Consider scheduling outpatient liver biopsies in the morning so that patients can be easily monitored in the facility for at least four hours following the procedure when all the support staff is available to take care of complications, if any. A brief history and physical examination are done. There is a general consensus to stop antiplatelet and anticoagulation medications prior to the procedure. The duration for stopping these drugs depends on the mechanism of action of the medication. The indications for antiplatelet/ anticoagulation medications should be reviewed prior to advising cessation of therapy. Most centers stop these agents five days prior to the procedure. Most experts obtain a routine complete blood count with coagulation profile to ensure platelet count is within normal range, and there is no evidence of coagulopathy. Abnormalities of the above are associated with an increased risk of post-procedure bleeding. No routine antibiotics need to be given.

Patients can typically take a light snack four hours prior to the procedure. The experts have varying opinions about fasting duration. Anxious patients might require sedation; therefore, the longer duration of fasting is preferred.

Written informed consent should be taken.

There are four ways to perform a liver biopsy.

This can be done using three different techniques:

Technique: The patients are made to lie in a comfortable supine position. The right hand is placed under the head in a neutral position.  By percussion, the area of maximum dullness is identified over the right hemithorax. This is typically between the 6 and 9 intercostals spaces between the anterior and the midclavicular line. Dullness is confirmed on both inspiration and expiration to avoid inadvertent pneumothorax. The location of the biopsy is clearly marked.

Image-guided biopsy using ultrasound potentially increases the safety of the procedure and minimizes the likelihood of obtaining inadequate specimens, but this has not been shown to reduce the risk of major complications conclusively. All patients who need liver biopsy should ideally have had an ultrasound before the biopsy to evaluate for the presence of Chilaiditi syndrome (presence of small bowel between the liver and the abdominal wall), intrahepatic gallbladder and focal vascular lesions such as hemangioma. It is also helpful in targeted biopsy, e.g., for diagnosis of lesions identified in imaging studies.

The skin is prepped and draped in a sterile fashion. The overlying skin is anesthetized using 1% lidocaine. The peritoneum is also anesthetized by inserting the needle along the upper border of the rib avoiding vascular structures.

This can be done either transjugular or transfemoral. This type of biopsy is very useful in patients that are at high risk for complications from percutaneous biopsy, such as those with ascites, obesity coagulopathy, sickle hepatopathy, suspected hepatic amyloidosis, and chronic kidney disease. Also, the free and wedged hepatic venous pressures can be measured at the same time, besides being able to opacify the hepatic vein, which makes this procedure very useful to diagnose and grade the severity of sinusoidal and post-sinusoidal portal hypertension and is also helpful in post-transplant settings.

Technique: Interventional radiologists do this procedure under fluoroscopic guidance. The skin is anesthetized with 1% lidocaine over the puncture site, mostly right internal jugular.  The internal jugular vein is accessed, a sheath introducer is placed into the vein, and under fluoroscopic guidance, a catheter is advanced to the level of the right hepatic vein. Once the hepatic vein has been adequately visualized, a biopsy needle is threaded down the catheter and advanced into the liver parenchyma. Either of the above-described needles can be used. Biopsies obtained via this technique are often thinner than with the intercostal technique. If three to four passes are obtained, biopsies often provide adequate tissue.

This method is very safe in patients with chronic liver disease. It can be done during surgery for different indications when the liver is found to be abnormal or in a planned manner. It allows visual inspection of the liver. It is most useful in targeted biopsies of liver masses, staging tumors, and in patients found to have inconclusive results using percutaneous and transvenous methods. Peritoneal biopsies can also be taken during laparoscopy in patients with unexplained ascites. This is most useful in the diagnosis of malignancy and infectious diseases like tuberculosis.

Devices: Both cutting and aspiration type needles can be used. Also, wedge biopsies can also be taken.

Technique: Most centers perform the procedure in the operating room. However, diagnostic laparoscopy with moderate sedation can be done as an outpatient procedure now. The patient is monitored closely during the procedure, and having anesthesia assistance is very helpful. A Veress needle is most commonly used.  The use of nitrous oxide as compared to carbon dioxide has improved the tolerability of the procedure.

This is a modification of the percutaneous approach that can be used in patients who are at high risk for bleeding (coagulopathy or thrombocytopenia). Although a transvenous biopsy can be obtained in this subset of patients, the plugged approach is used when a larger specimen size is desirable.

Technique: The technique is similar to the percutaneous approach, except the biopsy tract is plugged with gel foam, collagen, or thrombin while the sheath is being removed.

Liver biopsy is a very safe procedure in the hands of skilled operators.  The overall rate of serious complications was approximately 1% in two large series, while in another, overall mortality risk was estimated to be 0.2%. The usual indicators of complications requiring overnight hospital observation are severe abdominal or shoulder tip pain not relieved with one dose of parenteral analgesic, hypotension, or tachycardia following the procedure.[8]

This is the most common complication after liver biopsy. It can be seen in up to 84% of the patients. It is most common at the site of the biopsy or the right shoulder (this often indicates a subcapsular hematoma), or both. In most patients, it is usually controlled with analgesics. Severe persistent pain should alert the physician to investigate serious causes of pain like bile peritonitis, hemorrhage. The patient may require admission and radiological assessment.

This is usually clinically insignificant except in patients with obstructive jaundice like primary sclerosing cholangitis or in the post-transplant setting. Currently, there is no recommendation for treating with prophylactic antibiotics and treatment can be offered on a case by case basis.

This can occur with the inadvertent puncture of the gallbladder or in patients with obstructive jaundice and dilated bile ducts. It usually presents with abdominal pain, fever, leukocytosis. It can also be painless in some patients. Biliary scintigraphy demonstrates the leak. Treatment is usually with fluids and antibiotics. Very rarely, endoscopic procedures like ERCP or surgery may be required.

Patient factors: The patient is usually kept in the right decubitus position. The duration of observation varies across centers ranging from 1 hour to 6 hours. The American Association for the Study of Liver Diseases guidelines recommends observation for 2 to 4 hours. The vital signs are monitored every 15 minutes for the first hour, every 30 minutes for the next hour and hourly till discharge. Most complications of liver biopsy usually occur within the first 1 to 3 hours after biopsy or within 24 hours. Hence the patient should have a dependent individual to stay overnight after the procedure. The patient should be hospitalized if there are any complications associated with the procedure, including pain that requires more than one dose of analgesia within the first 4 hours of observation following the procedure.

Adequacy of specimen:  Liver diseases can be patchy; therefore, biopsy specimens may not be representative of the underlying pathology. It is important that the liver biopsy specimen be adequate to allow detailed interpretation. This means that the biopsy should be big enough to view a representative amount of parenchyma and number of portal tracts. The number of portal tracts is proportional to biopsy size. Obtaining more than one core increases the diagnostic yield, but at the cost of increased complications. Biopsies taken with a 16-gauge needle result in larger specimen sizes. Most experts agree that a specimen with 11 portal tracts and about 3 cm long is adequate for evaluation. If an adequate specimen is not obtained after two passes, an alternative approach should be considered. Thus, long and wide (ideal size is 3 cm long after formalin fixation obtained with a 16-gauge needle) biopsies are desirable. A cutting needle is preferable to a suction needle if the physician suspects cirrhosis.

Although several noninvasive markers are now available, histological evaluation of the liver will continue to remain an important tool in assessing disease. It is a safe procedure in the hands of skilled operators with relatively few complications.

A liver biopsy may be performed by the radiologist, gastroenterologist, or general surgeon. While the procedure is relatively safe, the patient needs to be monitored by the nurse afterward. The key complication is bleeding, which can present up to 24 hours after the procedure. In the recovery room, the nurse should monitor the vital signs, abdominal distension, and degree of pain. Fortunately, in most cases, liver bleeding does stop spontaneously. an interprofessional teach approach will provide the best outcome and safest care of the patient. [Level 5] 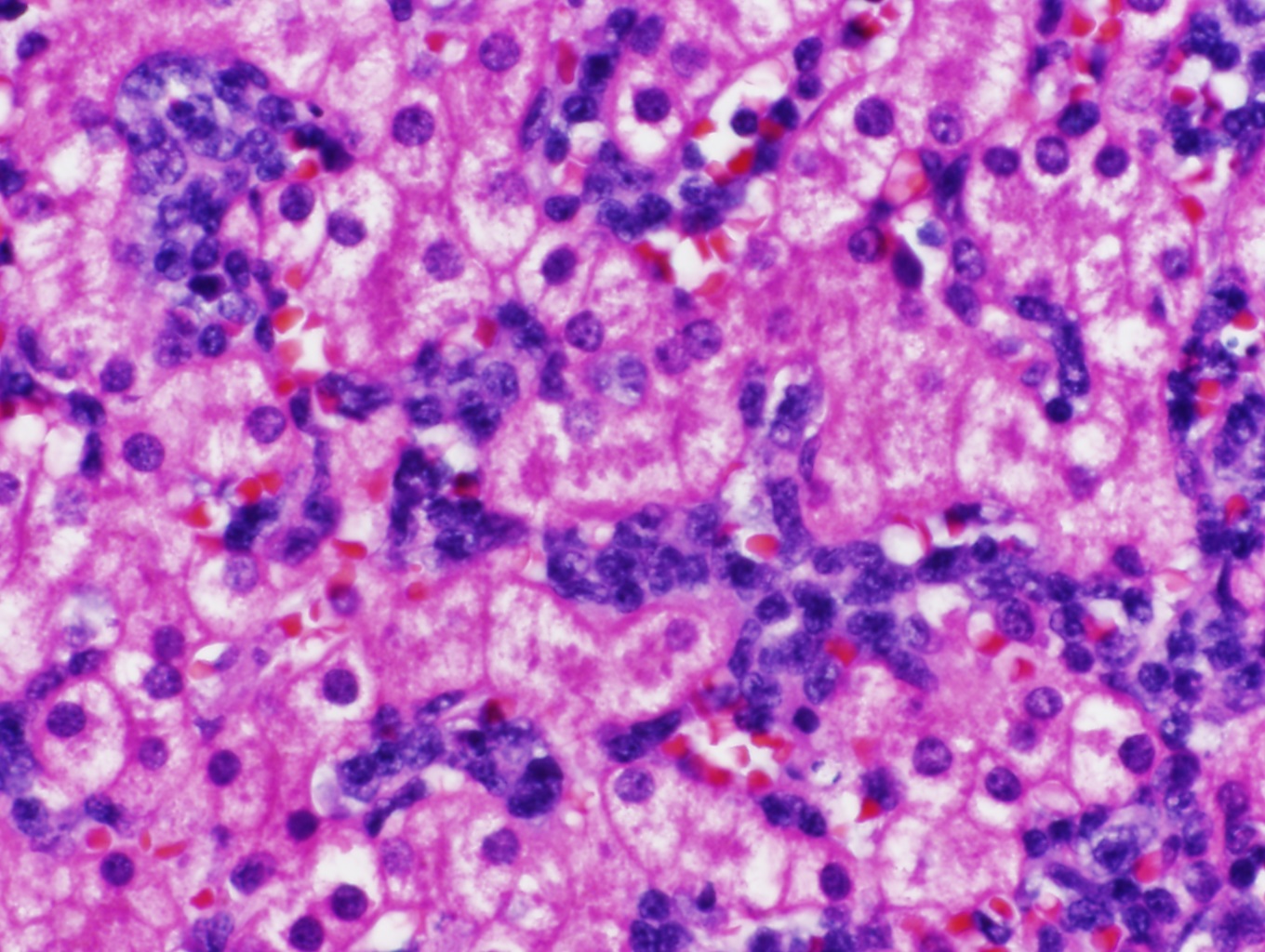