The LAD carries almost 50% of the blood carried by the coronary circulation.  During systole, the heart muscle squeezes over the perforating arteriolar branches and causes complete cessation of flow.  All coronary flow, therefore, occurs during diastole when the pressure from the cardiac contraction is not obstructing the blood flow.  Therefore, the coronary flow is dependent on diastolic blood pressure.  Just like any other capillary bed, the coronary circulation is controlled by local autoregulation mediated by demand dependent arteriolar dilatation.[1][2]

The coronary arteries run on the epicardial surface of the heart to avoid being compressed by the cardiac muscle when it contracts.  The left anterior descending artery (LAD) is the largest coronary artery runs anterior to the interventricular septum in the anterior interventricular groove, extending from the base of the heart to the apex.  The LAD gives two sets of branches. The septal branches perforate the interventricular septum to supply the anterior two-thirds of the septum.  These are numbered as S1, S2, onwards starting from base to the apex.  The second set of branches course over the anterior aspect of the left ventricle and are called diagonal branches.  These are also numbered D1, D2, onwards starting from proximal to distal.  Around the apex, the LAD anastomoses with the terminal branches of the posterior descending artery which is usually a branch of the right coronary artery.

Depending upon the length of the LAD, the LAD is classified into four types: type-I – does not supply the left ventricular (LV) apex, type-2 – supplies part of the apex, the rest being supplied by the right coronary both, type3 – supplies the entire apex, and type-4 – supplies the apex and >25% of the inferior wall (wrap around).

A small left conus branch usually arises from the proximal LAD and anastomoses with its counterpart from the right coronary artery around the aortic conus and also with the vasa vasorum of the aorta and the pulmonary artery.

The LAD and its branches are epicardial and give off “end-arteries,” in effect arterioles that perforate the myocardium to supply it.

Vasa Vasorum are tiny blood vessels that supply blood to the coronary vessels themselves.  The lymphatics of the heart drain back along the coronary arteries, emerge from the fibrous pericardium along with the aorta and the pulmonary trunk and empty into the trachea-bronchial lymph nodes and mediastinal lymph trunks.

Myocardial Bridging: Although coronary vessels run over the epicardial surface of the heart, sometimes the artery courses intra-myocardial under a muscle “bridge.”  Bridging is found in 0.5% to 40% individuals when identified clinically and 15-85% on autopsy studies.[3]

Anomalous Origin: Anomalous origin of left coronary artery from the pulmonary artery is a rare malformation (incidence of 0.25–0.50%) in children with abnormal cardiac development leading to a mortality rate of 90% in unoperated infants.[4]

Given the importance of LAD for coronary blood flow, during coronary artery bypass surgery, surgeons often try to bypass this with the best possible graft, usually using the left internal mammary artery (LIMA). During such surgery, LIMA is mobilized from the chest wall keeping its origin intact.  Side branches are tied off, and the end is anastomosed to the LAD.  LIMA to LAD grafts are very durable.

The LAD is the largest coronary artery.  Atherosclerosis or thrombotic occlusion of this vessel causes myocardial infarction involving large areas of the anterior, septal and apical portions of the heart muscle leading to serious impairment of cardiac performance.  For the same reason, during revascularization by percutaneous or surgical methods, it is important to restore the flow in the LAD.[5][6] Infarcts involving LAD occlusion frequently involve the apex.  This can be accompanied by the formation of clots in the apex.  These clots can embolize cause stroke or systemic embolism. 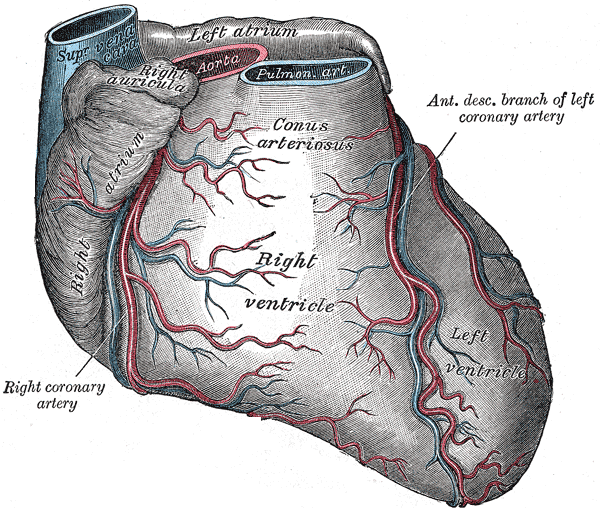 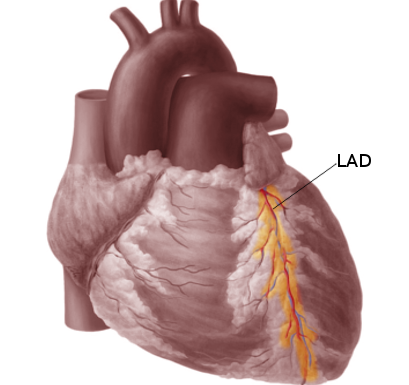