Laryngeal mask airways (LMA) are supraglottic airway devices. They may be used as a temporary method to maintain an open airway during the administration of anesthesia or as an immediate life-saving measure in a patient with a difficult or failed airway. Laryngeal mask airways were introduced into clinical practice in the 1980s where they were initially used predominantly in the operating room. Since then, their use has become more widespread in the intensive care unit, emergency department, and field settings. This activity describes the indications, contraindications, and techniques involved in placing a laryngeal mask airway and highlights the role of the interprofessional team in the management of patients with difficult airways.

Laryngeal mask airways (LMA) are single-use or reusable supraglottic airway devices which may be used as a temporary method to maintain an open airway during the administration of anesthesia or as an immediate life-saving measure in a difficult or failed airway as outlined in the difficult airway algorithm published by many societies of anesthesiology worldwide.  Introduced into clinical practice in the 1980s, they were initially used predominantly in the operating room but have become widely used in the intensive care unit, emergency department and field settings.  LMAs are easier to use and more effective than a bag-valve-mask in the hands of basic life support providers and may be used as an alternative to intubation by advanced life support providers. Some models may be used as a conduit to facilitate endotracheal intubation.[1][2][3]

Supraglottic devices, like the LMA, are designed to be inserted blindly through the mouth and into the hypopharynx to seal around the glottic opening allowing for ventilation. The mnemonic RODS can be used to predict difficulty in either placing an extraglottic device or in providing adequate gas exchange through one. RODS stands for Restriction, Obstruction/Obesity, Disrupted or Distorted anatomy, and Short thyromental distance.  Restriction refers to both increased airway resistance - extraglottic devices have lower leak pressures than endotracheal tubes - as well as restricted mouth opening insufficient to allow for passage of the device. Patients with upper or lower airway obstruction due to a tumor or foreign body may make passage of or ventilation through the device difficult or impossible. Obese patients may have a redundant tissue, making it more difficult to seat the device in place, and the increased ventilatory pressures required in obese patients may increase the likelihood of a leak. Distortion or disruption of the airway from the midline makes the device less likely to seat properly. Small mandibular spaces, assessed by shortened thyromental distance, are associated with difficult use to extraglottic devices due to the position of the tongue.

LMAs may be used as a primary airway management devices in the operative setting in pre-selected, fasted patients. In the emergency setting, LMAs are used as a temporary bridge to intubation by pre-hospital providers, in cardiac arrest situations, as a rescue device in “can’t intubate, can’t oxygenate” situations, as a means to attempt ventilation in a failed airway situation followed by either intubation through the device or while a surgical airway is performed.[4][5][6]

LMAs have been used successfully with pediatric patients, adults, and obese individuals.

The LMA offers a great alternative to endotracheal intubation in pre-fasted, selected patients and may be associated with fewer complications as compared to intubation in selected patients. Despite this, significant complications may result from the utilization of an LMA including laryngospasm, nausea, vomiting, aspiration, and coughing. They may stimulate the gag reflex, and, therefore, should not be used in a conscious or awake patient. Contraindications to elective use include poor pulmonary compliance, high airway resistance, pharyngeal pathology, risk for aspiration, and/or airway obstruction below the larynx.

LMAs come in many forms and configurations. They consist of a tube attached to an inflatable, elliptical cuff designed to cover the supraglottic area, facilitating an open airway passage and allowing for either spontaneous or positive pressure ventilation. While the original LMA was a multi-use device, cleaning requirements and high cost have steered providers towards less costly, single-use LMAs. Several configurations are available from multiple vendors. The original LMA design has crossbars over the aperture designed to prevent passive herniation of the epiglottis into the opening. However, that design makes intubation through that device much more challenging. Those first-generation devices are still commonly used for routine cases due to the low cost, and they have low complication rates. Newer second-generation LMAs are now available and provide for higher seal pressures due to improved seal material or design, have no aperture bars, allowing for easier intubation using regular endotracheal tubes and providing a gastric access port to vent or aspirate gastric contents. Some even incorporate a bite block.

The LMA Fastrach, also called the ILMA is specifically designed to facilitate blind intubation. It is available in both reusable and disposable forms and has a handle designed to allow for optimal positioning and a bar designed to elevate the epiglottis out of the way to facilitate intubation. This device is designed for use with specialized endotracheal proprietory tubes made and packaged with the ILMA.

The I-Gel devices are unique in that they have a pre-shaped non-inflatable cuff. They are made from a gel-like-substance, which may be easier to insert because there is no cuff to inflate. The i-Gel also allows for the passage of standard endotracheal tubes. It may be used in patients of all ages from small infants to adults.

Prior to the insertion of an LMA, the patient should ideally be fasted and assessed for markers of difficulty or contraindications. This may not be possible in emergency situations where it is used as a rescue device. The LMA comes in various sizes, and recommendations are generally weight-based and printed on the package and the devices. For adults, the following is a simple size guide: size three for adults 30 to 50 kg, size four for adults 50 to 70 kg, and size five for adults over 70 kg. In general, the larger size should be chosen for patients between sizes because it will seal more effectively.[7]

Prior to insertion, the device should be placed on a flat surface. The cuff should be inflated and then completely deflated to ensure the cuff is not folded, pressing firmly on the flat surface. Lubricate both sides of the device with a water-soluble lubricant. When there is no risk of neck damage, the neck is extended in a sniffing position. Otherwise, a jaw thrust may be performed to facilitate passage. The LMA is introduced behind the tongue with backward pressure using the index finger, pressing the device against the hard palate until it is completely inserted. Then use the other hand to push the LMA until some resistance is felt and it can go no further.  The collar should then be inflated with approximately 20 mL for number three, 30 mL for number four and 40 mL for number five. This volume may need to be adjusted to optimize the seal and minimize the air leak. Once the cuff is inflated with the designated amount of air and placement is checked by attaching a bag mask and delivering breaths, assessing breath sounds and/or using continuous waveform capnography or at a minimum a CO2 detector device.

Endotracheal intubation can be achieved by inserting the endotracheal tube (ETT) through most second generation LMAs. Those devices do not have aperture bars at the cuff end and usually have higher seal pressures than the original LMAs that are still frequently used. The LMA Fastrach has a higher rate of intubation success compared to the standard 1 generation and is designed for blind intubation using the company’s proprietary endotracheal tube. However, failure rates can be as high as 40%, and endotracheal intubation is best facilitated under direct visualization using a flexible bronchoscope. Regular endotracheal tubes are usually not long enough to go past the vocal cords when inserted through an LMA. Using either a tube exchanger that slides over a flexible bronchoscope or using a nasal RAE tube, which is longer will overcome that problem.

The distal tip of the collar on the LMA may occasionally roll-upwards on insertion, which may hinder optimal placement. Some experts recommend partial inflation of the cuff before insertion or inserting the LMA upside-down and rotating it into position to prevent this complication, but there is insufficient evidence to recommend this practice. Forceful insertion may cause abrasion of the pharyngeal tissues or bleeding. Insufflation of the stomach may occur. It is not known to what degree an LMA will prevent aspiration of gastric contents and it should be considered a temporary or rescue measure in patients at risk for vomiting and aspiration and not considered a replacement for endotracheal intubation. It may be difficult to maintain an effective seal in patients with high airways pressures. The device may become easily malpositioned during CPR or if the patient is moved during transport and must be maintained in the midline.[8]

LMAs are not a good primary airway device in morbidly obese patients as those patients do require higher positive airway pressures that may produce leaks around the LMA cuff. In addition, having morbidly obese patients breathe spontaneously through an LMA during anesthesia may lead to significant hypoventilation due to the position of the patient and the weight of the abdomen.[9]

The complication rates with LMAs are low and less than those associated with both endotracheal intubation and use of bag valve masks.

LMAs have been shown to be as effective as other airway management strategies in patients receiving CPR.

LMAs may be used appropriately and successfully in pediatric patients.

Success rates for blind intubation through an LMA range from 60% to 99%, depending on the device and skill of the operator. Blind intubation rates are highest for the Fastrach LMA (ILMA) as compared to other supraglottic devices but should best be facilitated by flexible fiberoptic guidance whenever possible.

LMAs should not be the final secured airway solution in a failed airway rescue. They can become displaced when changing from a temporarily stable situation to another airway emergency and should be used as a conduit to a secure airway with an endotracheal tube.

LMAs have an important role in the management of a patient with respiratory distress. While most healthcare workers are familiar with the endotracheal tube, the use of the LMA does require experience. Healthcare workers include nurse practitioners who have never used an LMA should first consult with an anesthesiologist before attempting intubation. The LMA is only a temporary solution to the airway and can be easily dislodged with patient movements; hence, it is generally only used in the operating theater. 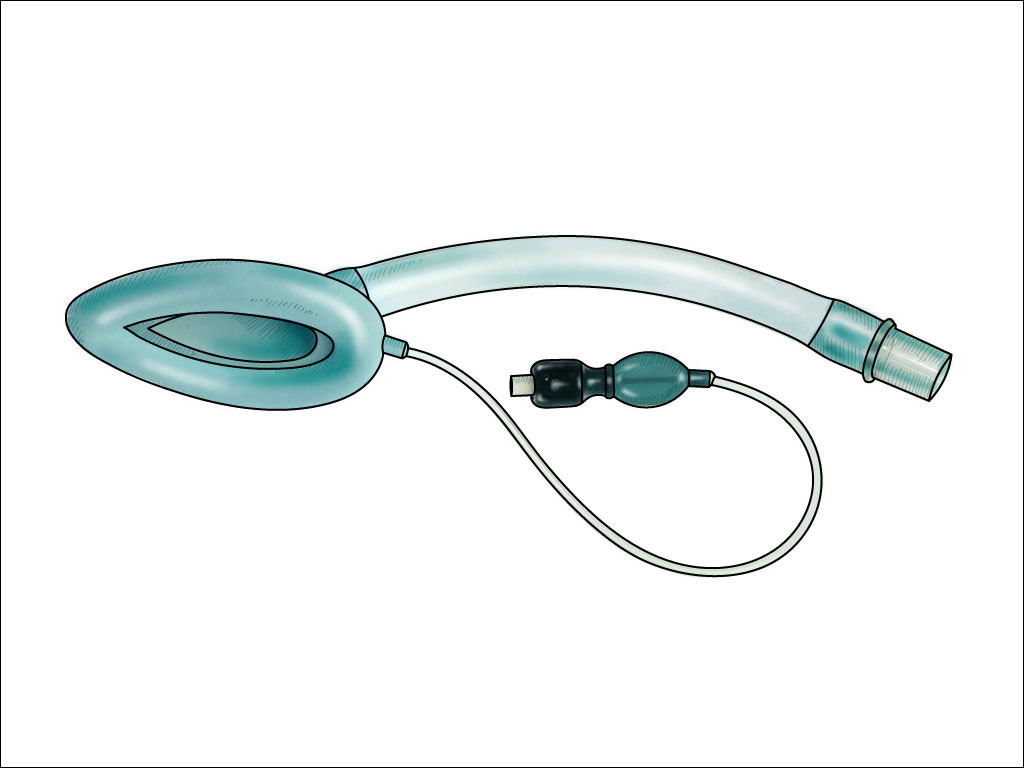