With the recent advances in technology, physicians may overlook the importance of the physical examination (PE). PE is of considerable significance and can yield important data necessary for the diagnosis and treatment. Upon initial presentation, a comprehensive physical examination is warranted. However, subsequent evaluations may be focussed and problem-oriented. The cardiac examination is a component of physical examination and is an invaluable tool in assessing the hemodynamic status of the patient. The jugular venous examination is a vital component of the cardiovascular exam. When performed carefully and properly, the jugular venous waveform can provide an estimate of central venous pressure (CVP) and, when it is distended, can provide prognostic implications in patients with heart failure.[1]

To perform an accurate assessment of jugular venous distension, one must appreciate and understand the anatomy of the jugular vein and its relation to other structures in the neck. The jugular vein is considered a central vein in the body. Central veins are thin-walled, distensible reservoirs and act as a conduit of blood in continuity with the right atrium. The jugular vein divides into external and internal.

The internal jugular vein forms from inferior petrosal sinus and sigmoid sinus at the base of the skull and exits via jugular foramen. Internal jugular vein (IJV) runs between the sternal and clavicular head of the sternocleidomastoid (SCM) muscle. A shallow defect between these landmarks can make the identification of IJV easier. It descends in the carotid sheath in the neck, lateral to the carotid artery, and drains into the subclavian vein to form a brachiocephalic vein at the base of the neck.

The external jugular vein forms from the posterior auricular vein and the posterior branch of the retromandibular vein behind the angle of the mandible. It runs obliquely across the sternocleidomastoid muscle in the superficial fascia of the neck and drains into the subclavian vein. In contrast to IJV, it can be easily visualized but is often not used to measure central venous pressure.

Examiner stands at the right side of the table because right-sided internal jugular vein connecting to the right brachiocephalic vein is in direct line with superior vena cava. Left IJ can be used if right-sided IJ is not visible. The left brachiocephalic vein, which connects left IJV, crosses the mediastinal structures before draining into superior vena cava and may be distended when there is partial obstruction of mediastinal structures.

The patients are positioned supine initially on the bed that is bent at the hip so that when the head of the bed is elevated, the head, neck, and thorax are on a similar plane.

Head should be slightly tilted away from the examiner (left if examining from the right), and the neck should be in extension with sternocleidomastoid relaxed. A penlight can help to enhance visualization.

JVP varies with respiration, with inspiration generally decreasing the pressure. In some patients, it might not decrease or may even increase, a finding called “Kussmaul sign.” It can occur in patients with constructive or effusive pericarditis, restrictive pericarditis, RV infarction, severe RV dysfunction, massive pulmonary embolism, severe tricuspid regurgitation, tricuspid stenosis, and cardiac tamponade.

The external jugular vein (EJV) is an option when IJV is not appropriate. Visualizing IJV is easier because it runs more superficially. After identifying EJV, forefinger should be placed above the clavicle on the vein; the venous column gets distended because of the blood coming from cerebral circulation. At this point, a second finger should be used to occlude the vein superiorly to prevent overdistension, and the finger at the clavicle should be released. Venous pressure is now measured since it approximates the vertical distance between the upper level of the fluid column and right atrium, estimated to be 5 to 6 cm behind the angle of Louis.

The IJV can be differentiated from the carotid artery by palpating radial pulse, where single upstroke systole coincides. Unlike carotid pulse, IJV is not palpable and varies with respiration. The IJV impulse has three upstrokes a, c and v, and two descents x and y.

Waveforms of JVP signifies the following:

x - a combination of atrial relaxation, downward movement of the tricuspid valve, and ventricular systole

y - the tricuspid valve opens, and the blood flows into the right ventricle.

When these are transmitted to the skin, a series of flickers are visible throughout the overlying skin. Once we have identified the IJV, we must estimate the venous pressure (VP). Normal VP is 1 to 8 cm of water.

A large 'v' wave is seen in tricuspid regurgitation when the right ventricle contracts and the tricuspid valve does not completely close, which results in the shooting of blood back to the right atrium.

JVP is one of the most common and readily available tools to measure right atrial pressure (RAP) and can be used to assess volume status, especially hypervolemic states, due to cardiac etiologies.

Right atrial pressure (RAP) is measured by adding the height of the venous column above the angle of Louis to the vertical distance between the sternal angle and the mid-right atrium. The vertical distance between the sternal angle and mid-right atrium varies according to the position of the patient; it is 5 cm, 8 cm, and 10 cm when the patient is at 0 (supine), 30, and 45, respectively[3]. Generally, 5 cm is used as an approximate measurement, albeit it can underestimate if used for all patients at all levels of elevation of the head (4).

Hence RAP is estimated with the following formula:

Jugular venous pressure measurement is a part of the cardiovascular examination, although its utility varies among the examiner and clinical setting. Its most common use is to estimate the right atrial pressure, especially in patients with heart failure, and also to measure the response to diuretic therapy. It is also helpful in the evaluation of conditions such as superior vena cava obstruction, tricuspid valve disease, and pericardial disease.

With rapid advances in technology for diagnostic testing, providers have become less attentive to the bedside evaluation of physical signs. Measuring jugular venous pressure requires close observation and assessment.[4] It can give insight into the hemodynamic status of the heart, especially when a patient has heart failure exacerbation, which causes an increase in right atrial pressure, which becomes reflected in the jugular venous column. This metric is simply the most readily available and repeatable tool to assess CVP. Although assessment and measurement of pressure can highly vary from patient to patient, the ability to diagnose rapidly is achievable through experience. Hence, learning to diagnose and prognosticate based on physical examination can help avoid invasive diagnostic tests.

Measuring jugular venous pressure is perhaps the most difficult but yet important physical diagnostic tool that yields vital information about the cardiac status in a patient. It comes with persistent practice and experience. A skilled health care professional should teach other physicians/nurses in identifying and measuring JVP in normal and in elevated JVP patients. Rapid identification can not only aid in the quick diagnosis, but it can also help in taking necessary measures to treat the underlying condition and preventing complications. 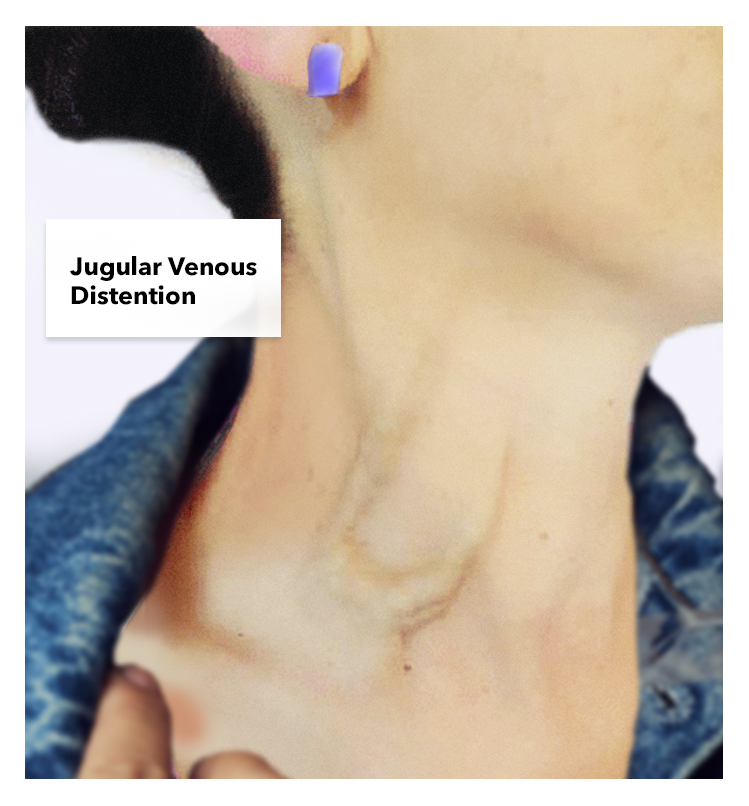