Immunization has become a vital part of public health and disease prevention, yet remain a controversial topic. Diseases which were once responsible for significant morbidity and mortality have now become all but eradicated, thanks to the introduction of vaccines. However, an anti-vaccination movement has resulted in a resurgence of diseases which until recently had been well-controlled. For example, measles is currently undergoing a global resurgence because not all individuals have agreed to be immunized against it. Immunization plays a role in the increased life expectancy and improved quality of life that civilization benefits from. This activity describes the indications, contraindications, and complications associated with immunizations and highlights the role of the interprofessional team in providing education to the public regarding the benefits of vaccination.

Immunization has become a vital part of public health and disease prevention, and yet, remains a controversial topic in our society today. Diseases which were once responsible for significant morbidity and mortality have now become all but eradicated, thanks to the introduction of vaccines. Immunization has contributed to increased life expectancy and improved quality of life[1][2].

The first vaccine is credited to Edward Jenner, who in 1796 inoculated a 13-year-old boy with the virus responsible for cowpox, and he demonstrated immunity to smallpox. The first smallpox vaccine was created in 1798 using that premise. Over the following centuries, and leading up to present-day, vaccine technology has improved, and vaccines to many illnesses have been developed. In 1979, global eradication of smallpox was achieved, thanks to immunization[3][4][5].

The World Health Organization has made lifelong immunization a priority, including it as a core to the 2030 Sustainable Development Goals. In fact, in 2012, the World Health Assembly adopted the Global Vaccine Action Plan, which aims to prevent millions of deaths by 2020 by increasing access and utilization of vaccines throughout all parts of the world. The first milestone this action plan hopes to achieve is the worldwide eradication of polio.

A vaccine is a pharmacologic compound that improves a person's immunity to a particular disease. When a disease-causing bacterium or virus invades the human body, the immune system recognizes the material as foreign, usually by detecting specific protein portions of the invading organism, known as antigens. Vaccines contain a form of the disease-causing agent, whether it be a weakened or killed form of the microbe itself, an inactivated version of its toxins, or a protein from the surface of the microbe. By introducing a form of the agent, the vaccine presents the antigen to the immune system, allowing it to recognize the antigen as foreign and develop antibodies and memory T-lymphocytes against those antigens. This allows a more rapid and robust immune response should the body be exposed to the organism in the future. In the absence of vaccination, the first exposure to the natural organism may prove fatal before the immune system can mount a sufficient immune response.

The vaccine introduces the antigen to begin the process, which stimulates the initiation of the immune response. Initially, the foreign material is phagocytized, and broken down by macrophages. The resultant peptides created by the breakdown of the protein material is sent to the surface of the macrophage cell, where it is displayed. These antigens are displayed by molecules called Major Histocompatibility Complexes, which exist in two forms: I or II (MHC-I or MHC-II). The presentation of the antigen stimulates the secretion of several inflammatory mediators, including cytokines and various interferons, which stimulate a further response.

In T-cell dependent immunity, so-called T-helper cells recognize the antigen and stimulate the corresponding B-lymphocytes to proliferate and produce antibodies. As the B-lymphocytes proliferate, they also differentiate into antibody-forming plasma cells. The antibodies produced have various functions, the most important of which include those which inactivate soluble protein toxins (antitoxins), those which facilitate intracellular digestion of bacteria by damaging the bacterial membrane (lysins), those that prevent reproduction of pathogenic viruses (neutralizing antibodies), and those that prevent bacterial adhesion to mucosal surfaces (antiadhesion). In response to vaccines, the first antibodies produced are primarily IgM, with a gradual switch to IgG in the following weeks.

Childhood vaccinations are indicated for the prevention of a multitude of viral and bacterial infections and their sequelae. Specific vaccination recommendations for children vary by region, as exposure to diseases varies by region.

Current recommendations for adult vaccination includes a yearly influenza vaccine and tetanus-diphtheria every 10 years, with tetanus-diphtheria-acellular-pertussis at least once in adulthood. The addition of acellular pertussis once during adulthood is intended to prevent the transmission of whooping cough to young children or those unable to be vaccinated. For those adults born after 1956 who didn't receive measles, mumps, rubella vaccinations, or varicella vaccination as children, these vaccinations are recommended in adulthood. Human papillomavirus, hepatitis A, and hepatitis B vaccines are also recommended in adulthood. Meningococcal vaccine is recommended for adults at high-risk, such as those living in close quarters (college students living in dorms, military personnel living in barracks). Pneumococcal vaccination is also recommended for adults at high risks, such as those with pre-existing pulmonary diseases like chronic obstructive pulmonary disease (COPD)[6].

Contraindications to immunization are rare[7]. The primary contraindication is an allergy to a vaccine or a component of the vaccine. Patients with a history of a compromised immune system, such as in AIDS or another immune deficiency, should use caution when vaccinating with a live attenuated vaccine. Live attenuated vaccines should not be given to a pregnant woman, unless there is an immediate risk (such as a polio epidemic), as the live vaccines have the potential to infect the fetus.

Caution should be used when administering a vaccine to a child with an acute moderate to severe illness, with or without a fever. The cause of fever following vaccination in this population may be difficult to determine, whether it be continued illness or directly resulting from the vaccination. This may complicate the management of the illness.

Immunizations are administered with syringes and sterile needles. The size and type of syringe and needle depending on the vaccination, the specific route of administration, and on clinician preference. Personal protective equipment, including medical gloves, is also required. Alcohol or other topical disinfectant is used to prepare the skin before vaccine administration. A simple band-aid or gauze and tape can be used to cover the site following administration.

Immunizations come in various preparations, depending on the manufacturer. Many vaccinations are combinations, such as the measles, mumps, rubella or tetanus, diphtheria, acellular pertussis vaccines. Vaccines may be prepared in a single dose or multi-dose preparations. Some vaccines come in prefilled syringes, while others are in vials and must be drawn into a syringe before administration.

Typically, immunizations are administered intramuscularly, whereby the preparation is directly injected into a muscle belly. Some vaccines are given via the subcutaneous or transdermal route.

Most vaccines carry a small risk of B-symptoms following administration, including fever, fatigue, and myalgias[8]. These symptoms are caused by the immune response being mounted against the antigen introduced by the vaccine and usually last a day or two. Swelling and redness may occur at the injection site, and localized muscle soreness may also occur.

More serious complications are possible, though extremely rare. Anaphylaxis may occur in response to a vaccine or one of its ingredients.

Another very rare complication of vaccination is Guillain-Barre Syndrome, which is a potentially life-threatening condition affecting the peripheral nervous system. The mechanism by which vaccination causes Guillain-Barre is not known. Symptoms include ascending paresthesias and paralysis, with potential paralysis of respiratory muscles possible.

Vaccination is vital to public health. Disease prevention has been proven to prolong life expectancy and improve quality of life. As antivaccination movements gain traction, diseases once thought to be eradicated or nearly eradicated have had significant outbreaks. Unfortunately, preventive measures such as vaccines are often overlooked by primary care providers and patients[9]. For children, parents often do not know the appropriate schedule for vaccines, and therefore are often unaware of when their children are behind on vaccinations. Another common reason for missed vaccination is missed appointments for various reasons. Patient recall and reminder systems have been created and shown significant improvement in increasing vaccination compliance rates.

Nurses, pharmacists, and providers are typically responsible for providing patients with immunizations and monitoring compliance. Often patients and the patient's parents are not the only ones responsible for poor vaccination compliance. Primary care providers, nurses, and pharmacists also sometimes overlook preventive measures, as they are focused on appointments regarding specific illnesses or symptoms or the need to fill prescriptions. Provider recall and reminder systems have also been created and also have shown improvement in vaccination compliance. The team needs to work together to assure the community and individuals are protected by appropriate immunization. [Level V] 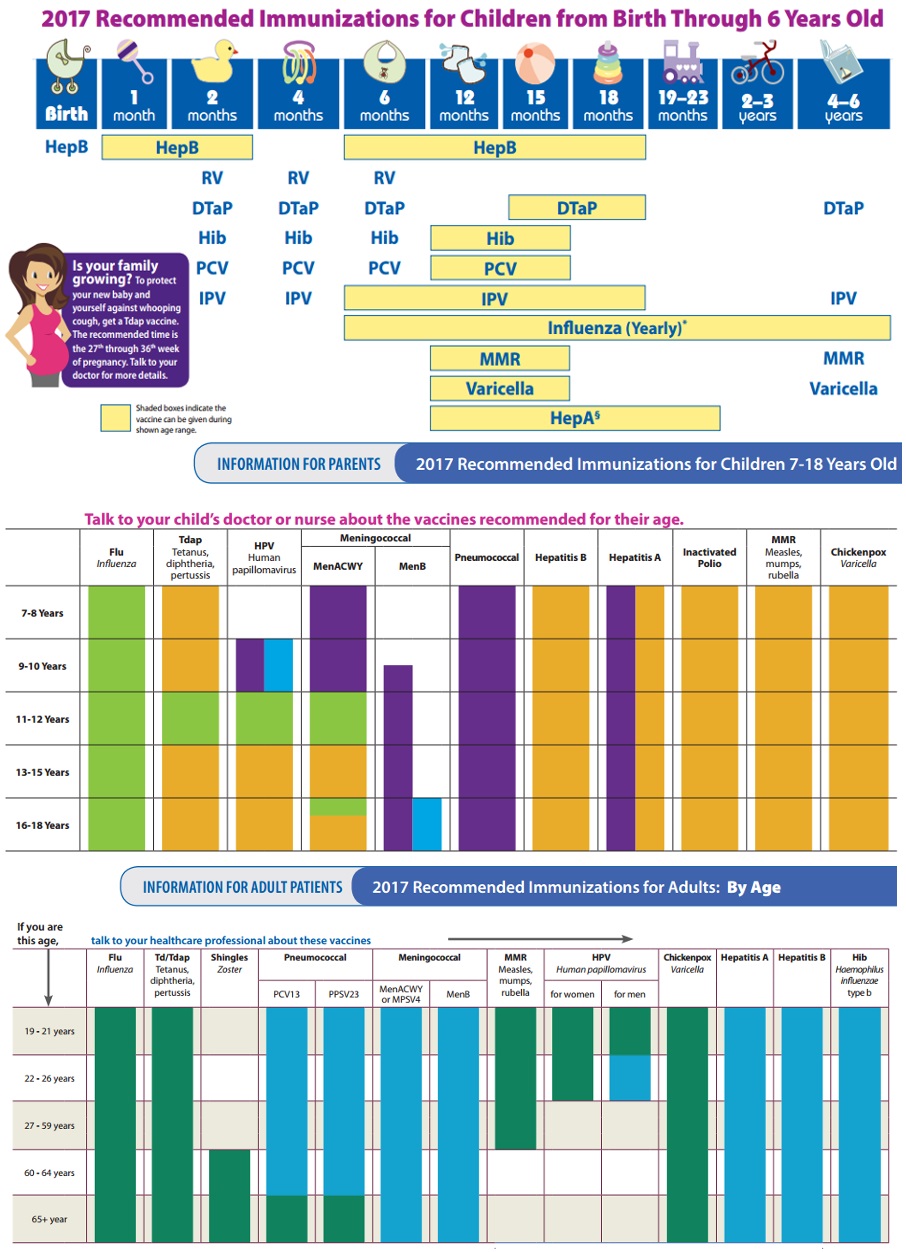 Recommended Vaccine Schedule from the CDC.
Contributed by the Centers for Disease Control and Prevention (CDC)