The hip joint is primarily responsible for providing dynamic support of the weight of the upper body while facilitating force and load transmission from the axial skeleton to the lower extremities. This structure and function allow for ambulation and mobility. It is a ball-and-socket synovial joint that articulates the head of the femur with the acetabulum of the pelvis.

The hip joint is the connection that exists between the lower extremity and the axial skeleton. Its deep ball-and-socket construction allows for significant levels of stability, load transmission, and weight bearing while still being able to facilitate movement in three planes: flexion/extension, abduction/adduction, and internal/external rotation.[2][3]

The hip joint is formed predominantly from mesoderm and begins to come into existence between weeks 4 to 6 gestational age. During week 7, cartilage precursor cells start to form the bony components of the hip joint: the acetabulum and the head of the femur. Hip joint development is mostly complete by the eleventh week of gestation.

The arterial blood supply of the hip joint is complex and comes from multiple sources.

The following list includes the branches of the anterior trunk of the internal iliac artery:

The following list includes the branches of the posterior trunk of the internal iliac artery:

Most of the arteries of the hip region originate from the external iliac artery and include:

The capsular blood supply receives contributions from four key vessels: the medial and lateral circumflex femoral arteries (MFCA and LFCA, respectively), which are branches of the profunda femoris artery, as well as the superior gluteal artery (SGA), a branch of the posterior division of the internal iliac artery, and the inferior gluteal artery (IGA), a branch of the anterior trunk of the internal iliac artery. In a study of 20 cadaveric hips, Kalhor et al. found that the MFCA and LFCA give off branches that supply the distal and proximal capsule, while the IGA and SGA were the main arterial supply to the posterior capsule.[4][5][6]

There are two significant anastomoses formed by combinations of these arteries. The first is the cruciate anastomosis, a circulatory anastomosis in the upper thigh comprised of the IGA, the MFCA and LFCA, and the first penetrating artery of the profunda femoris. The cruciate anastomosis allows blood to reach the popliteal artery indirectly from the internal iliac artery and IGA if there is an interruption of flow between the external iliac and the femoral arteries. The second major anastomosis is the trochanteric anastomosis which arises from circumferential connections involving the SGA and the MFCA and LFCA around the femoral neck. This anastomosis ensures that the femoral head has multiple alternate sources of blood flow if one or more arteries are injured or occluded.

The obturator artery also provides an important source of arterial blood flow to the hip via the artery of the ligamentum teres. This artery penetrates the hip joint through the acetabular notch and traverses inside the ligament of the head of the femur to send blood to the femoral head. This blood supply is mostly insignificant in adults relative to the vessels mentioned above, but in the pediatric population, it is a crucial component as the cartilage-composed epiphyseal line does not allow for substantial blood flow to the head of the femur. Thus, the artery of the ligamentum teres helps supply the head and neck of the femur on its own until the growth plate closes. Around 15 years of age, this branch loses patency and becomes a remnant in the adult hip, explaining why it does not prevent avascular necrosis in fractures of the femoral neck.[7]

The lymphatic drainage from the anterior side of the hip drains to the deep inguinal nodes, while the posterior and medial aspects drain alongside the gluteal and obturator arteries respectively to the internal iliac nodes.

There are many muscles involved in the movement of the hip joint, these include (in alphabetical order) the:

The blood supply to these muscles derives from the same major vessels that supply the hip joint. The MFCA supplies the adductor group, gracilis, and pectineus. The LFCA supplies the vastus lateralis, vastus intermedius, and rectus femoris. The vastus medialis gets its blood supply from the superficial femoral artery as well as the deep femoral artery. The perforating arteries of the profunda femoris give vascular supply to the hamstring muscles.

The most common and most clinically significant source of variation in the location of hip arteries is with the MFCA and its point of origin. According to Al-Talalwah, in 342 dissected hemipelvis specimens the MFCA arose from the common and deep femoral artery in 39.3% and 57% of cases, respectively. In 2.5% of cases, it originated from the superficial femoral artery and in 0.6% of cases it arose from the LFCA. Due to this variation, it is highly important that surgeons keep in mind all possibilities to avoid iatrogenic injury of the MFCA that can lead to avascular necrosis of the femoral head.[8]

As with all surgeries, various complications must be kept in mind to avoid intraoperative and postoperative issues. These include bleeding (usually from the MFCA during total hip arthroplasty procedures),[9] not maintaining adequate blood flow to nearby vessels during procedures on the hip,[10][11] or even avulsion injuries to the profundal femoris artery that may lead to pseudoaneurysms. These possible complications are reasons why it is of utmost importance to assess for neurovascular injuries immediately after hip operations and regularly during postoperative follow-up evaluations. Overall, though, vascular injuries are fortunately extremely rare complications of hip procedures.[12]

Avascular necrosis of the hip is a condition characterized by the death of the femoral head due to disruption of its vascular supply, chiefly the MFCA. This condition results in the insidious onset of hip pain, usually with movement, and can be the result of a variety of factors. Some of the most common causes can be remembered by the mnemonic “ASEPTIC”:

Making the diagnosis is dependent on a good history and physical along with imaging. Hip radiographs may be negative early in the course of the disease so if there is a high clinical suspicion then an MRI may be utilized.[13][14] 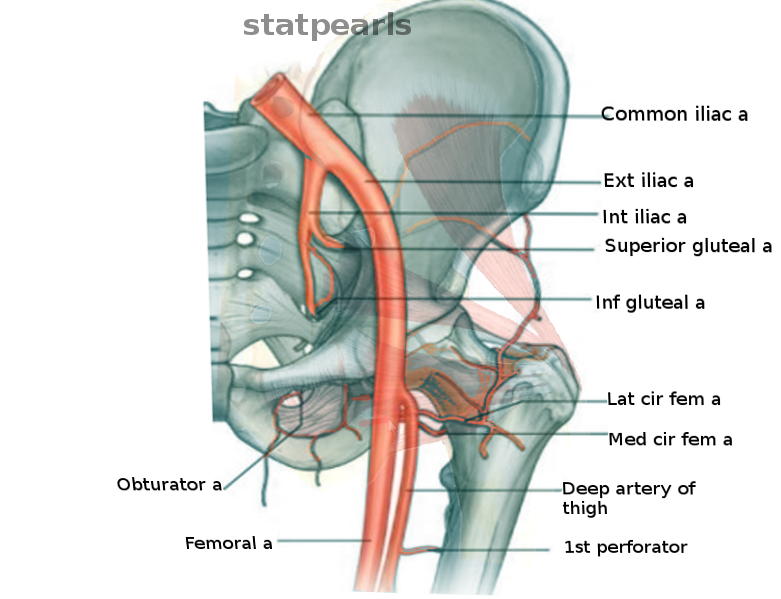