A common definition of aerospace medicine is the medicine of normal physiology in an abnormal environment. A subspecialty within occupational medicine, the challenge of aerospace medicine lies in safeguarding the health of individuals who work in a dynamic atmosphere of lowering pressure and oxygen content, coupled with increasing altitude. It is essential to comprehend the physical changes that occur as we ascend from sea level to address the medical needs of the pilot, aircrew, and aircraft passengers. Most notably, an understanding of the chemical gas laws that describe the characteristics of atmospheric gases as well as those gases that reside within our bodies is critical to the practice of aerospace medicine.  Henry’s Law is one of the most pertinent of these gas laws to the practice of aerospace medicine. Named after the English physician William Henry, this law defines the relationship between the partial pressure of gases overlying a solution and the gases’ ability to dissolve in that solution. [1]

A person experiences Henry’s Law in action when they open a new bottle of soda pop. Upon removal of the cap, the carbon dioxide gas “atmosphere” in contact with the soda rushes out, and the gas pressure drops precipitously. In turn, less of the gas in the soda stays dissolved; the gas comes out of solution as bubbles and foam. So long as adequate gas pressure is maintained over the liquid, the dissolved gases will remain in the solution.

Presented as a formula, Henry’s Law can be written as the following:

For example, your blood is a solution containing multiple gases. At sea level, those gases remain in solution (i.e., blood). This is because, at sea level, air and arterial blood contain approximately the same partial pressure of gases, primarily nitrogen. As one rises in the atmosphere, the partial pressure decreases, and the amount of these gases held in solution (i.e., blood), necessarily must decrease. This results in gas evolving in the bloodstream. As a result, the otherwise inert nitrogen supersaturates in the bloodstream, or “bubbles out” like our soda pop example. While some oxygen can potentially evolve out of solution, the overwhelming majority of oxygen in the bloodstream is bound to hemoglobin, which prevents this occurrence.

The unbound nitrogen bubbles in the vascular system result in various forms of decompression illness, a catchall term referring to both the discomfort associated with decompression sickness as well as more severe conditions like an arterial gas embolism. This problem can be partly controlled with the pressurization of the cabin. Additionally, so long as the rate of ascent is relatively slow, the risk of a supersaturation resulting in bubble formation is relatively low. It is largely because of this ascent at a controlled rate and cabin pressurization that bubbles normally do not form during a commercial airline flight. In most commercial and military fixed-wing aircraft, pressurization typically is performed to maintain the partial pressure of a gas in the cabin to the equivalent of the pressure at 8000 feet (2438 meters). It is considered to be an acceptable risk to fly at elevations up to 12000 feet (3658 meters) unpressurized, so this practice is discouraged. [1]

Henry’s Law is significant to aerospace medicine in several ways. The most apparent is that Henry’s Law accurately describes the phenomena that result in decompression illness as well as affording the framework for the measures used to treat these conditions.

While the concept of Henry’s Law can logically apply to both aerospace and undersea medicine, the manifestations of Henry’s Law in flight do not perfectly correspond to those underwater. Specifically, manifestations such as decompression sickness directly tie to the absolute altitude achieved. While pressurization reduces the effects of decompression illness and can allow the pilot and other crew members to gradually acclimate to decreased air pressure, at higher elevations even pressurized aircraft cannot fly safely due to the risk of supersaturation of inert gases in the bloodstream.

Current data suggests that a flyer in a pressurized cabin is less likely to experience decompression illness at an exposure equivalent of fewer than 18000 feet (5486 meters). In civilian and military aviation, the challenge of avoiding decompression illness tends to be higher in our rotor wing, or helicopter, pilots and crew. These aircraft have unique requirements that usually preclude cabin pressurization and thus are forced to fly at lower altitudes to avoid the effects of Henry’s Law on human physiology.

Several techniques are effective in both the prevention and treatment of conditions at altitude related to Henry’s Law. Breathing gases used in high altitude aircraft usually have a higher concentration of oxygen than at sea level to both prevent hypoxia and help promote denitrogenation; by removing nitrogen, the hope is to avoid supersaturation effects at altitude. This approach is also the premise behind placing oxygen masks on oneself during an airline emergency where the cabin pressure is compromised. Cabin pressurization is the other significant preventive measure to reduce the risk of decompression.

The ideal option for resolving symptoms of bubble formation while in flight is threefold. First, drop in altitude, ideally to sea level if possible. Second, oxygen should be used therapeutically to “blow off” nitrous gas. Finally, landing to permit evaluation by a flight surgeon is optimal to determine if further interventions are necessary.  If symptoms persist, or significant central nervous system manifestations occur, it is essential to immediately transfer the patient to a hyperbaric chamber to pressurize the gas surrounding the patient and dissolve nitrogen gas back into solution in the bloodstream. 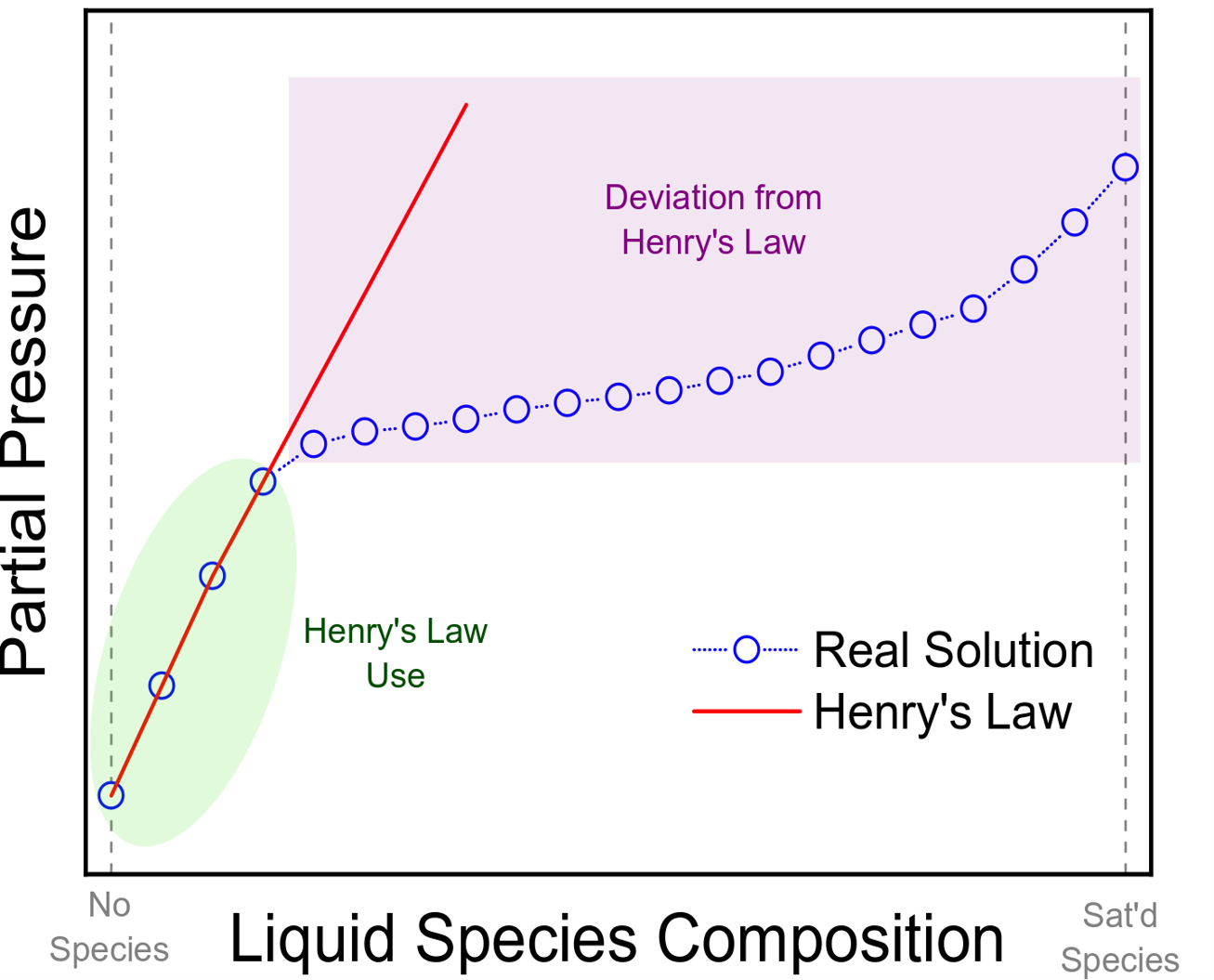 Henry's Law use at low solution composition. At higher concentrations, Henry's Law is not a valid assumption.
Contributed by Kevin M. Tenny