Heart failure is a complex clinical syndrome in which the heart is unable to pump enough blood to meet the requirements of the body. It results from any disorder that impairs ventricular filling or ejection of blood to the systemic circulation. Patients usually present with fatigue and dyspnea, reduced exercise tolerance and fluid retention (pulmonary and peripheral edema). This activity reviews the evaluation and management of congestive heart failure and highlights the role of the healthcare team in improving care for patients with this condition.

Heart failure is a complex clinical syndrome that results from any functional or structural heart disorder, impairing ventricular filling or ejection of blood to the systemic circulation to meet the systemic needs. Heart failure can be caused by diseases of the endocardium, myocardium, pericardium, heart valves, vessels or metabolic disorders. Most patients with Heart failure have symptoms due to impaired left ventricular myocardial function. Patients usually present with symptoms of dyspnea, decreased exercise tolerance and fluid retention, characterized by pulmonary and peripheral edema.

Heart failure with preserved ejection fraction (HFpEF) on the other hand has also been variably classified as EF >40%, >45%, >50%, and/or ≥55%. The term HFpEF has been used since some of these patients do not have entirely normal EF but also do not have a major reduction in the systolic function. Patients with an EF between the range of 40% to 50% have been considered to represent an intermediate group of patients due to a variable cut off used for systolic dysfunction by the different studies. These patients should be routinely treated for underlying risk factors and comorbidities and with optimal guideline-directed therapy, similar to that of HFrEF.

When heart failure develops, compensatory mechanisms attempt to increase the cardiac filling pressure, muscle mass and heart rate. However, in many cases, there is usually a progressive decline in heart function.

Hypertension, obesity, coronary artery disease, diabetes mellitus, atrial fibrillation, and hyperlipidemia are highly prevalent in HFpEF patients. Hypertension by far is the most important cause of HFpEF. In addition, conditions like hypertrophic obstructive cardiomyopathy, and restrictive cardiomyopathy are associated with significant diastolic dysfunction, leading to HFpEF.

Causes of high-output failure include:

Very common causes of decompensation in a stable patient with HF include:

Approximately 5.1 million people in the United States have clinically manifest heart failure, and the prevalence continues to increase. Heart failure incidence has remained stable over the past decades, with more than 650,000 new cases of heart failure cases diagnosed annually, especially for individuals greater than 65 years of age. Because prevalence is greater in this age group, heart failure prevalence is expected to worsen in the near future.Epidemiological differences have been noted. Black men have the highest incidence rate (1000 person-years) for heart failure and the greatest five-year mortality rate when compared to whites. White women represent the lowest incidence. Heart failure in non-Hispanic black males and females has a prevalence of 4.5% and 3.8%, respectively, versus 2.7% and 1.8% in non-Hispanic white males and females, respectively. Although survival has improved, the absolute mortality rates for patients with heart failure remain approximately 50% within five years of diagnosis. The survival rate is inverse proportional to the staging severity of heart failure. The 5-year survival for stage A, B, C, and D heart failure was found to be 97%, 96%, 75%, and 20%, respectively in a study.

By 2013, heart failure costs in the United States exceeded $30 billion.

The adaptive mechanisms that may be adequate to maintain the overall contractile performance of the heart at relatively normal levels become maladaptive when trying to sustain adequate cardiac performance. The primary myocardial response to chronically increased wall stress is myocyte hypertrophy, death due to apoptosis, and regeneration. This process eventually leads to remodeling, usually the eccentric type, and reduced cardiac output, causing a cascade of the neurohumoral and vascular mechanism.

Both BNP and ANP are peptides released from the atria and ventricles in reposne to heart chamber pressure/volume expansion. These peptides promote natriuresis and vasodilatation. In addition. BNP inhibits the reabsorption of sodium in the proximal convoluted tubule. It also suppresses renin and aldosterone release.

All of these mechanisms will cause negative remodeling and worsen the left ventricular function, causing symptoms of heart failure.

Symptoms of heart failure include those due to excess fluid accumulation (dyspnea, orthopnea, edema, pain from hepatic congestion, and abdominal distention from ascites) and those due to a reduction in cardiac output (fatigue, weakness) that is most pronounced with physical exertion.

Acute and subacute presentations (days to weeks) are characterized by shortness of breath at rest and/or with exertion, orthopnea, paroxysmal nocturnal dyspnea, and right upper quadrant discomfort due to acute hepatic congestion (right heart failure). Palpitations, with or without lightheadedness can occur if patient develops atrial or ventricular tachyarrhythmias

Chronic presentations (months) differ in that fatigue, anorexia, abdominal distension, and peripheral edema may be more pronounced than dyspnea. The anorexia is secondary to several factors including a poor perfusion of the splanchnic circulation, bowel edema, and nausea induced by hepatic congestion.

Device therapy: implantable cardioverter-defibrillator (ICD) is used for primary or secondary prevention of sudden cardiac death. Cardiac resynchronization therapy with biventricular pacing can improve symptoms and survival in selected patients who are in sinus rhythm and have a reduced left ventricular ejection fraction and a prolonged QRS duration. Most patients who satisfy criteria for cardiac resynchronization therapy implantation are also candidates for an implantable cardioverter-defibrillator and receive a combined device.

A ventricular assist device (bridge to transplant or as a destination therapy) or cardiac transplant are reserved for those with severe disease despite all other measures.

To reduce heart failure hospitalizations, it is reasonable (class IIa) to use Ivabradine in patients with NYHA II-III with guideline-directed medical therapy (including a beta-blocker) and heart rate of more than 70 bpm.

Heart failure disease management is a complex condition that requires a multidisciplinary framework for the care of patients, including discharge planning, patient education, and frequent outpatient assessment.

Heart failure is a serious disorder that is best managed by an interprofessional team that includes the primary care physician, emergency department physician, cardiologist, radiologist, cardiac nurses, internist, and a cardiac surgeon. It is imperative to treat the primary cause of heart failure. Healthcare workers including nurses who look after these patients must be familiar with current guidelines on treatment. The risk factors for heart disease must be modified and the pharmacist should educate the patient on the importance of medication compliance. The dietitian should educate the patient on the importance of a low salt diet and limiting fluid intake. The nurse should educate the patient on the importance of exercise, avoiding stress and ensuring follow up with the cardiologist. The pharmacist should ensure that the patient understands the importance of medication compliance, which is often the single most important factor leading to decompensation. Patients need to be educated on the importance of maintaining a healthy body weight, discontinuation of smoking, controlling blood pressure and ensuring normoglycemia. A cardiac nurse should follow these patients and monitor their progress. The only way to lower morbidity and mortality is through open communication between the team members.

When the condition is not managed appropriately, it is associated with high morbidity and mortality, including a poor quality of life.[1] 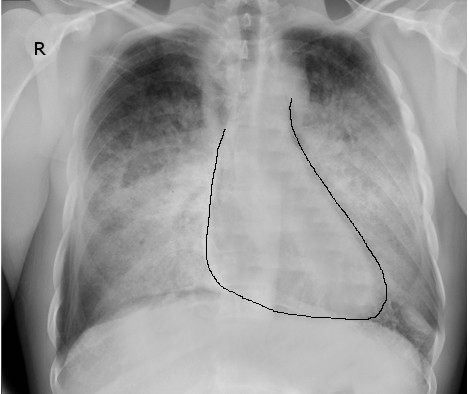