The first system to develop due to the growing embryo's ever-increasing metabolic demands is the cardiovascular system. Initially, simple diffusion of necessary nutrients is sufficient but eventually becomes inadequate to supply oxygen and nutrients. Cardiac development is a complicated interplay of molecular communication, ensuring the proper formation of structures and spatial configuration changes in the appropriate timing. Interference with this process, whether genetic or environmental, leads to the formation of congenital heart diseases.

Prior to the end of the cardiac loop formation, the heart tube is essentially smooth-walled. However, near the end of the loop formation, trabeculated regions begin to form, and these trabeculated regions serve as primitive ventricles. The impaired development (or total lack of development) of the trabecular meshwork has associations with embryonic lethality.[1]

The endocardial cushions eventually fuse with the septum primum. Physiologic apoptosis produces perforations in the septum primum, which ultimately coalesce to form a structure called the ostium secundum. The ostium secundum allows for blood from the right primitive atrium to the left primitive atrium. Eventually, expansion of the right atrium occurs, during which a new fold develops in the right atrium. This fold of tissue is called the septum secundum, and it never completely partitions the atrium. The anterior aspect of the septum secundum extends inferiorly towards the fused endocardial cushions.

Septum formation of the ventricles has a somewhat different approach from the developmental standpoint, as opposed to the atria. The ventricle walls start to expand by approximately the 4th week, with gradual apposition and merger of the medial ventricular walls, forming a muscular interventricular septum. The membranous part of the interventricular septum forms from the complete closure of the interventricular foramen, which closes from tissue growth from the endocardial cushions. The pacemaker of the primitive heart tube is located in the caudal portion. Later in development, the sinus venosus (a location in the mammalian embryological heart between the two venae) assumes the pacemaker's role of the embryonic heart. Its incorporation into the right atrium serves as the origin of the sinoatrial node.

Studies determined that the sinoatrial node, atrioventricular node, and proximal bundle branches originate from separate lineages early in embryonic development in mouse subjects.[2] Although numerous genetic factors bear on the heart's structural development, several factors play a role in the development of the conduction system itself. In particular, the Shox2 factors have been speculated to lead to abnormal cardiac phenotypes, particularly congenital bradycardic arrhythmia.[3]

Cardiac cells will assume their function depending on the position they will have. The cells that make up the cardiac layers (endocardium and the pericardium) are in the same area of the cells that will constitute the myocardium.

The establishment of laterality is an essential aspect of cardiac development, facilitated by cilia configuration within the primitive node. Ciliary structures found in the primitive node have a unique design that allows for overall leftward migration with the failure of such a process, leading to dextrocardia conditions. The motile cilia rotate in a clockwise fashion to generate this movement. The determination of the left-right cardiac axis is via several genes typically induced by NODAL expression. In turn, the NODAL expression induces expression of left-right determination factor (LEFTY) gene expression and paired-like homeodomain transcription factor 2 (PITX2).[6] The PITX2 gene is considered the primary gene responsible for the determination of left-right orientation. The PITX2 gene has several roles in cardiac development. In addition to establishing left-right orientation, PITX2 gene mutations have associations with isolated cardiac congenital heart disease, including atrial septal defect, ventricular septal defect, and tetralogy of Fallot.[7] Even aside from mutations, some studies have emphasized the global effects of regulatory gene knockout on embryonic lethalities, such as the demonstrated importance of VangI2 on cardiac outflow tract development and Noggin on contractility.[8]

The cardiovascular system is the initial system to develop due to the growing embryo’s growing metabolic demands. Compared to the adult cardiovascular system, one notes several distinctions, particularly that of a well developed pulmonary system in the adult. In an amniotic fluid environment, the fetus would not need a developed pulmonary system (as the placenta serves as a means of oxygen exchange). Several cardiovascular structures (such as the foramen ovale and the ductus arteriosus) minimize blood flow to the fetal lungs by directing blood into the systemic circulation and away from the lungs. The minimal blood flow to the developing pulmonary system prevents the premature development of the lungs.

The ductus arteriosus is a small vessel connecting the pulmonary artery and the aorta. It allows for blood flow from the right ventricle into the systemic circulatory system, bypassing the nonfunctional fetal lungs. Prostaglandins maintain its patency, and it closes after birth. The vestigial remnant of this structure is the ligamentum arteriosum. Premature closure of the ductus arteriosus is usually due to pharmacological agents that block prostaglandin synthesis (i.e., NSAIDs).

zA significant majority of congenital heart defects occur due to genetic mutations that interfere with cardiac development. Other conditions are also associated with abnormalities in the various developmental stages, often due to the influence of teratogens such as alcohol, rubella, etc. Chromosomal lesions (as those found in DiGeorge syndrome or Holt-Oram syndrome) are also noted to contribute to congenital heart disease development. The number one genetic cause of congenital heart disease is trisomy 21, which often manifests itself as endocardial cushion defects.The significant features of congenital heart disease can follow one or more elements of the following classifications: malformations causing shunting (right-to-left or left-to-right) or malformations causing an obstruction. Shunts are abnormal communications between systemic circulation (the left heart) and the pulmonary circulation (the right side).

The term shunt refers to abnormal communication between vascular structures, and these shunts permit non-physiologic blood flow along pressure gradients. Blood flowing from the right side of the heart to the left side is termed a “right-to-left” shunt, while blood flowing from the left side of the heart to the right side is a “left-to-right” shunt. Right-to-left shunt implies the circulation of deoxygenated blood (i.e., blood that has yet to reach the pulmonary system) to the systemic circulation. Patients with a right to left shunts present with cyanosis and at increased risk for paradoxical embolism and the associated complications like infarction and abscess formation. In contrast, left-to-right shunts do not present with cyanosis since the systemic circulation still receives oxygenated blood. However, the increase in pulmonary blood load from the left-to-right shunt leads to profound pathological responses, partly due to the pulmonary system being a “low-pressure” system incapable of withstanding the increased pressure.The pulmonary arteries typically respond to the increased blood flow and pressure via hypertrophy and vasoconstriction. Eventually, pulmonary vascular resistance approaches systemic levels, creating a shunt reversal (now right-to-left) to distribute deoxygenated blood into the systemic system. The name given this condition of shunt reversal is Eisenmenger syndrome. Once pulmonary hypertension develops, the congenital heart condition progresses beyond irreparability.

The most commonly associated left-to-right shunts include atrial septal defect, ventricular septal defect, patent ductus arteriosus, and atrioventricular septal defects. Common right-to-left shunts include Fallot’s tetralogy, transposition of the great arteries, persistent truncus arteriosus, total anomalous pulmonary venous connection, and tricuspid atresia.Calreticulin is a Ca (2 +) - binding chaperone and is found in the endoplasmic reticulum. Studies reveal that it is a fundamental substance in the complex process of cardiac development. An alteration of the calreticulin function will cause cardiac disorders such as hypertrophy and dilated cardiomyopathy. 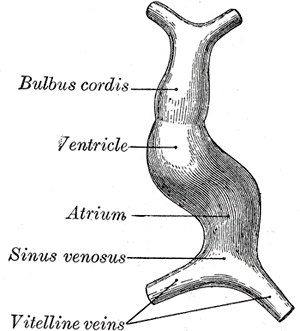