Psoriasis is a chronic, inflammatory disorder that presents as well-defined, scaly, erythematous plaques, and occasionally, sterile pustules. Guttate psoriasis is a distinct variant of psoriasis that is classically triggered by streptococcal infection (pharyngitis or perianal) and is more common in children and adolescents than adults. Patients present with several, small drop-like lesions that respond well to topical and phototherapies. This activity describes the pathophysiology and presentation of guttate psoriasis and highlights the role of the interprofessional team in its management.

Psoriasis is a chronic, inflammatory disorder that presents as well-defined, scaly, erythematous plaques, and occasionally, sterile pustules. Several clinical variants of psoriasis exist including plaque psoriasis, guttate psoriasis, and pustular variants. Psoriasis frequently involves the joints, leading to psoriatic arthritis. Nail involvement is found in 10-80% of patients with psoriasis. [1]Psoriasis displays a spectrum of clinical manifestations, and several variants may be present at one time in the same patient.

Guttate psoriasis is a distinct variant of psoriasis that is classically triggered by streptococcal infection (pharyngitis or perianal) and is more common in children and adolescents than adults. Patients present with several, small “drop-like” lesions that respond well to topical and phototherapies. [2]

Approximately 2% of the world population is afflicted with psoriasis; in the United States and Canada, the prevalence is as high as 4%. In general, psoriasis has a bimodal peak of onset. Onset can peak at 20 to 30 years of age and 50 to 60 years of age. Guttate psoriasis accounts for less than 30% of all total cases of psoriasis. It occurs equally in both genders and is more common in children and adolescents than adults over the age of 30. [1]

The interplay between genetic and environmental factors are implicated in the pathogenesis of psoriasis. Psoriasis is primarily a disorder of T cells, namely CD*+ T cells in the epidermis and a mixture of CD4+ and CD8+ cells in the dermis. ;[4]Th1 cytokines (interferon-gamma [IFN-] and interleukin [IL-]2), IL-1, I-6, and tumor necrosis factor-alpha (TNF-alpha) are upregulated, and Th2 cytokines (IL-10) are downregulated. Much of the success of biologic therapy is owed to the role of IL-23 in the pathogenesis of psoriasis. Dendritic cells release IL-23, which promotes Th17 stimulation, causing IL-17 and IL-22 release leading to dermal inflammation and keratinocyte replication. An understanding of this complex interplay between interleukins has allowed targeted biologic therapy for psoriasis.

Psoriasis is the model of the psoriasiform reaction pattern, defined as epidermal hyperplasia with elongation of the rete ridges. In addition to hyperplasia of the epidermis, there is an elongation of the dermal papillae, dilated superficial blood vessels, hypergranulosis, and parakeratosis.

Remnants of neutrophils in the stratum corneum are referred to as microabscesses of Munro. A discrete collection of neutrophils  (spongiform pustule of Kogoj) can also be found in the upper stratum spinosum.

On physical exam, guttate psoriasis manifests as numerous, small scattered papules and plaques. These are often referred to as “drop-like” and typically manifest as 2 to 6 mm papules. These lesions exhibit an isomorphic response or the Koebner phenomenon. The Koebner phenomenon refers to the appearance of lesions in areas of trauma (e.g., excoriations, sunburn, lesions of other eruptions such as Varicella or pityrosporum folliculitis), as wound healing triggers hyperproliferative changes in the skin. Although psoriasis is the prototype of koebnerization, this response can also be seen in pityriasis rubra pilaris, lichen planus, verruca plana (flat warts), lichen nitidus, vitiligo, lichen sclerosus, elastosis perforans serpiginosa, systemic lupus erythematosus, and other dermatological conditions.

In addition to Koebner phenomenon, all variants of psoriasis share certain characteristics that are reflected on histology, for example, erythema (elongated and dilated capillaries on histology), thickness (acanthosis with cellular infiltrates on histology), and silver scale (reflects abnormal keratinization). All lesions of psoriasis exhibit Auspitz sign, or pinpoint bleeding when the surface of a psoriatic lesion is removed. This reflects elongated vessels in the dermal papillae, together with thinning of the epidermis.

A diagnosis of guttate psoriasis can usually be made on history and clinical grounds alone. Skin biopsy is typically not necessary; however, lesions should demonstrate the histopathological findings discussed above. An elevated antistreptolysin O, anti-DNase B or streptozyme titer can indicate a recent streptococcal infection, further guiding the diagnosis towards guttate psoriasis.

For mild psoriasis, topical corticosteroids are first-line treatment. [5] Topical steroids are available in several forms including ointments, creams, lotions, gels, foams, sprays, and shampoos. Ointment formulations are the most efficacious mainly secondary to their lipophilic properties. Corticosteroids are contraindicated in cases of bacterial, viral, and mycotic infections, atrophy of the skin, pregnancy, and lactation. Second-line therapy for mild psoriasis is anthralin (dithranol) as monotherapy or in combination with topical corticosteroids. Other topical steroids include vitamin D analogs (calcipotriene), topical retinoids (tazarotene), topical calcineurin inhibitors, and salicylic acid.[5]

Currently, there are several biologic treatment options indicated for plaque psoriasis. However, they have not been well-studied for guttate psoriasis. At this time, targeted biologic therapy is best reserved for the 40% of guttate lesions that progress to plaque type.

The differential diagnoses of guttate psoriasis include tinea corporis, secondary syphilis, nummular eczema, and pityriasis rosea. Guttate psoriasis can be distinguished from these entities by history and physical exam, although further studies such as potassium hydroxide (KOH) scrapings and serologies may be helpful in ruling out the other disorders in the differential diagnoses.

Psoriasis is a chronic inflammatory disorder that is challenging to evaluate and treat. It is more common in children and adolescents than adults. An interprofessional team of clinicians, nurses, and pharmacists managing patients with this disease will lead to the best outcomes. [Level 5] 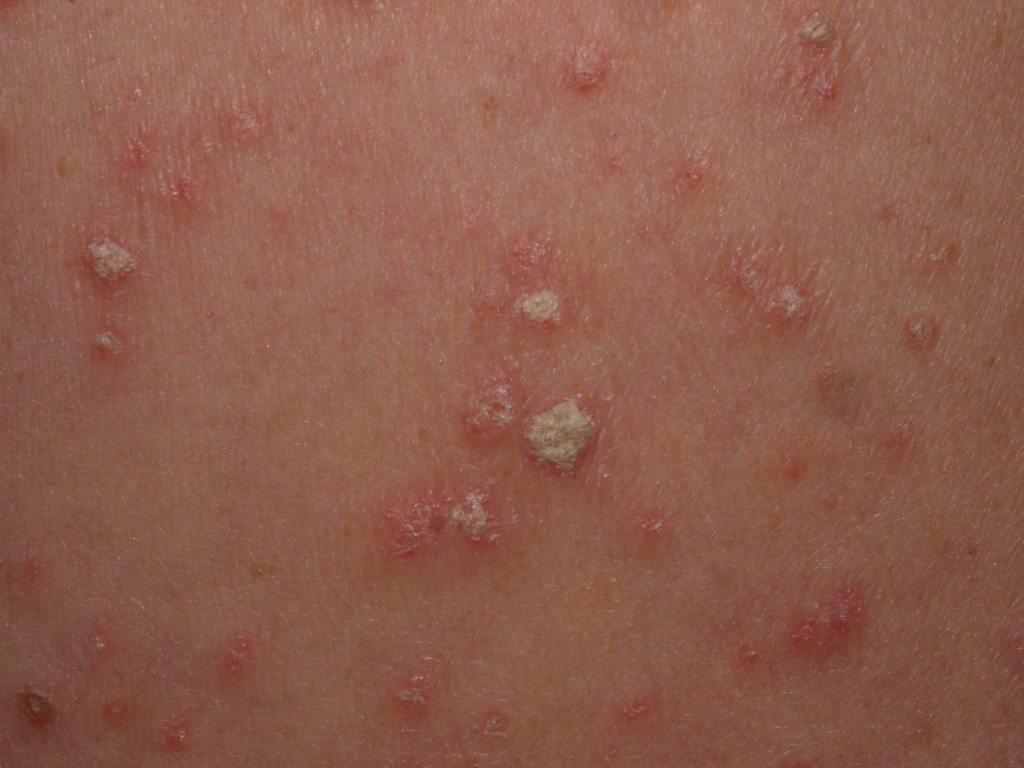