A greenstick fracture is a partial thickness fracture where only cortex and periosteum are interrupted on one side of the bone, while they remain uninterrupted on the other side. Greenstick fractures occur most commonly after a fall on an outstretched arm (FOOSH); however, they can also occur due to other types of trauma including motor vehicle collisions, sports injuries, or non-accidental trauma where the child is hit with an object. Malnutrition, specifically vitamin-D deficiency increases the risk of greenstick fractures of the long bones after a trauma. This activity reviews the evaluation, management, and pathophysiology of greenstick fractures and highlights the role of the interprofessional team in the caring for affected patients.

The makeup, anatomy, and histology of the pediatric skeletal system is not just a smaller version of the adult form; rather, it is unique in that it allows for rapid growth and change throughout development from childhood to adulthood.[1] The majority of differences between adult and pediatric skeletal systems are due to the open physis in the pediatric population, which allows for continued growth prior to skeletal maturation during puberty and adulthood.[1] The physis is the growth plate in long bones including phalanges, fibula, tibia, femur, radius, ulna, and humerus. It allows for bone growth from a cartilage base, known as endochondral ossification, which differs from bone growth from mesenchymal tissue, or intramembranous ossification.[2] The physis is located towards the end of the long bone, with the epiphysis above it and metaphysis below it.[1] Long bones like the femur have 2 physes separated by a diaphysis, which is the shaft of a long bone. However, long bones like the phalanges have only one physis.

The physis is split into 4 zones: (1) the reserve or resting zone, which is made up of hyaline cartilage; (2) the zone of proliferation, which is made up of multiplying chondrocytes that arrange into lacunae (lakes); (3) the zone of hypertrophy, where the chondrocytes stop dividing and start enlarging; and (4) the zone of calcification, where minerals are deposited into the lacunae to calcify the cartilage. The calcified cartilage breaks down allowing for vascular invasion and osteoblastic/osteoclastic bone matrix deposition and remodeling.

Therefore, prior to ossification, the majority of pediatric bone is just calcified cartilage, which is very compliant when compared to the ossified bones of adults.[1] Due to their increased compliance, pediatric bones tend to have more bowing and bending injuries under stress that would cause a fracture in an adult bone.[1] Furthermore, the pediatric periosteum is more active, thicker and stronger in children, which greatly decreases the chance of open fractures and fracture displacement. These and other qualities of the pediatric periosteum, as well as the increased compliance of the pediatric bone, are responsible for the unique fracture patterns seen in pediatric patients. These fracture patterns include greenstick, torus, and spiral injuries, which are bending injuries rather than full thickness cortical breaks.[1]

A greenstick fracture is a partial thickness fracture where only cortex and periosteum are interrupted on one side of the bone, while they remain uninterrupted on the other side.[1]

Greenstick fractures occur most commonly after a fall on an outstretched arm (FOOSH); however, they can also occur due to other types of trauma including motor vehicle collisions, sports injuries, or non-accidental trauma where the child is hit with an object. Malnutrition, specifically vitamin-D deficiency increases the risk of greenstick fractures of the long bones after a trauma.

Approximately 12% of all pediatric emergency department visits in the United States are due to musculoskeletal injuries. Fractures make up a large percentage of musculoskeletal injuries resulting in significant morbidity and complications. Greenstick fractures are most likely to be found in the pediatric population under 10 years of age but can occur in any age group, including adults.[3] There is equal incidence rate in female and male patients, however, male patients are more likely to sustain fractures.[4][5][6]

A greenstick fracture is a partial thickness fracture where only cortex and periosteum are interrupted on one side of the bone but remain uninterrupted on the other.[1] They occur most often in long bones, including the fibula, tibia, ulna, radius, humerus, and clavicle. Most commonly, they occur in the forearm and arm involving either the ulna, radius or humerus.[1][3] This is because people brace falls with an outstretched arm, resulting in fractures to the upper extremities.

History and physical exams of patients with greenstick fractures are no different from patients with other types of fractures. Age, gender, anatomic location, soft tissue involvement (assessment of open versus closed), and mechanism of injury are all important features of the history. Location, soft tissue involvement, and neurovascular status are important aspects of a physical exam. Furthermore, the joints below and above the site should be evaluated for occult fractures or multiple fractures.

Common physical findings include decreased range of motion, pain to palpation, and ecchymosis over the injured area.[10] More critical findings include edema, tenting if displaced, soft tissue changes such as abrasion or laceration, and signs of injury to the neurovascular bundle.[10] When assessing a distal forearm, there should be suspicion for median nerve injury which can occur with greenstick fractures. A full neurological check should be done with all traumatic injuries. Other findings that may indicate non-accidental trauma include multiple injuries and ecchymoses in different stages of healing that do not follow an age-appropriate injury pattern.

Diagnostic evaluation includes an x-ray of the injured extremity or area of complaint. Typical x-ray findings demonstrate a bending injury with a fracture line that does not completely go through the bone.[1][10]There is a fracture of the periosteum and cortex on one side (the tension side) which does not extend to the other side of the cortex and periosteum.[10] On an x-ray, there is a visible fracture on the tension side with the opposite side of the bone demonstrating plastic deformation due to compressive forces.[1][10]

If the degree of angulation is significant, then the healthcare provider needs to perform a closed reduction and immobilization.[10] All greenstick fractures require immobilization, and casting several days after the initial injury decreases the risk of the need to recast due to increasing edema post fracture. Orthopedic referral at the initial visit is generally recommended, but depends on the degree of angulation and age of the child.

Cast immobilization of long bone greenstick fractures should last approximately six weeks.[10][11] The type of cast depends on the location of the fracture. Distal fractures can be put in short arm casts, while proximal fractures require long arm casting and may be switched to a short arm cast midway through the healing process at approximately three weeks. Patients with proximal fractures require closer orthopedic follow-up.[10][12] However, all greenstick fractures should have some type of orthopedic follow-up due to their unstable nature and increased likelihood of refracture and displacement compared to buckle or plastic bending injuries.[10]

Although less commonly practiced, greenstick fractures may be treated with splinting if there is only a small amount of angulation and if there is close follow-up with the family or patient.[13] Splinting may be less costly, and will allow for removal of the splint for showers.

Generally, the prognosis is good; the majority of greenstick fractures heal well without functional or gross changes in the appearance of the injured bone. However, if not properly immobilized and without proper orthopedic follow-up, there is risk of refracture, complete fracture and displacement of the fracture.[10]

Greenstick fractures have a high risk of refracture due to their instability and the need to be quickly immobilized.[10][12] A primary greenstick fracture can result in a high rate of recurrent forearm fractures.[10] According to one case series, after reduction of the radius greenstick fracture, further radiographic analysis of the proximal and distal segments of the radius should be done to ensure that the rotational position of each matches the other.[14] This is referred to the as the radius crossover sign and may help reduce the risk of deformity and loss of forearm motion.[14] One case report demonstrated a greenstick scapula fracture that resulted in physical exam findings of scapular winging.[15]

Orthopedic consultation should be considered in the initial exam and diagnosis but is not necessary for simple greenstick fractures without angulation.[10] However, an orthopedic referral is necessary after the initial visit for close follow-up, casting, and to reduce the risk of complications.[10]

Trauma and sports injuries, most commonly due to a FOOSH, may lead to fractures and require immediate evaluation to prevent complications. Greenstick fractures require immediate immobilization to prevent recurrent fractures, complete fracture, or displacement. Activities with a high risk of falling should be avoided while the patient is healing as there is a high risk of refracture and complete fracture.

Greenstick fractures are usually seen in the pediatric population and best managed by an interprofessional team that includes the pediatrician, emergency department physician, orthopedic nurse, and an orthopedic surgeon. If the degree of angulation is significant, then the healthcare provider needs to perform a closed reduction and immobilization.[10] All greenstick fractures require immobilization, and casting several days after the initial injury decreases the risk of the need to recast due to increasing edema post fracture. Orthopedic referral at the initial visit is generally recommended, but depends on the degree of angulation and age of the child.

The outcomes for most children are good. However, follow up is required to ensure proper healing is occurring. 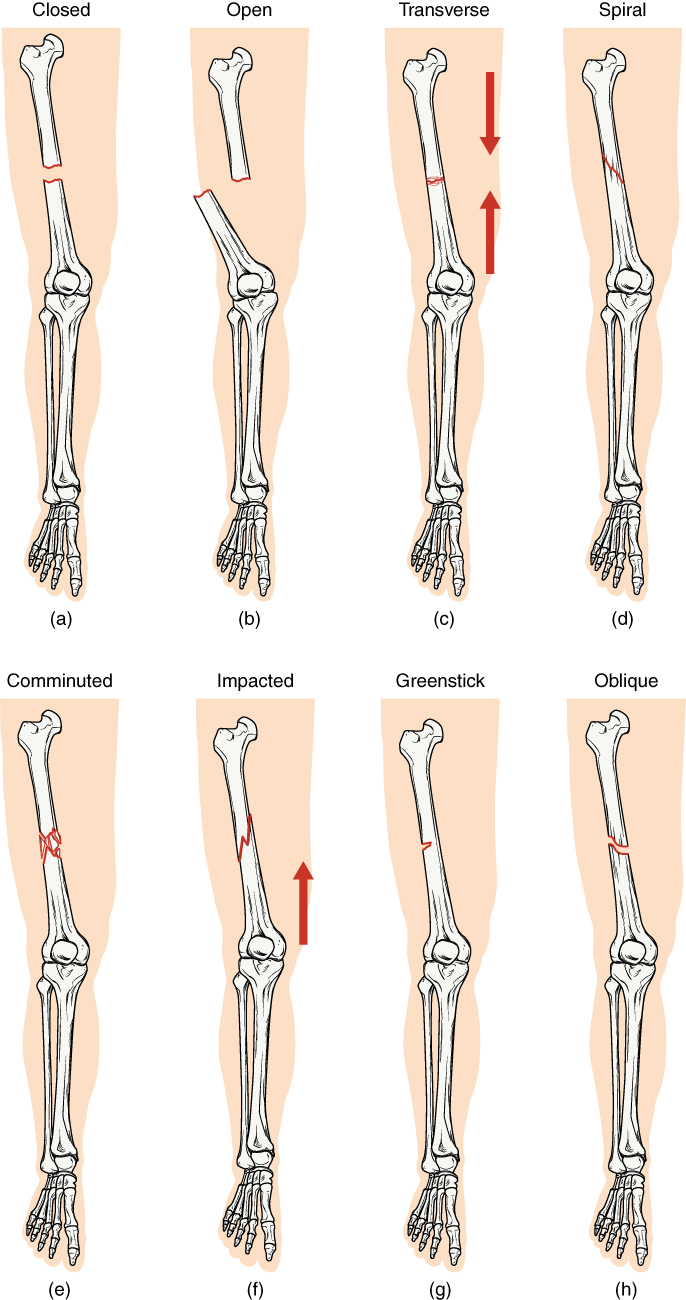 Bowen TR,Miller F, Greenstick fracture of the scapula: a cause of scapular winging. Journal of orthopaedic trauma. 2006 Feb     [PubMed PMID: 16462570]