Granulation tissue is considered a contractile organ, characterized histologically by the presence and proliferation of fibroblasts, keratinocytes, endothelial cells, new thin-walled capillaries, and inflammatory cell infiltration of the extracellular matrix. The formation of granulation tissue is complex and requires an intricate interplay between the cell types at the wound site.

This cell type is responsible for the formation of the granulation tissue extracellular matrix (ECM). The ECM initially consists of type III collagen, which is a rapidly produced and a weaker form of collagen that is ultimately replaced by the stronger type I collagen at the end of wound healing and scar formation. TGF-β is a growth factor produced by both fibroblasts and keratinocytes during the wound healing process and has been shown to induce granulation tissue formation and the differentiation of myofibroblasts.

Angiogenesis requires that the endothelial cells grow quickly into the new tissue from the older intact blood vessels that branch out and form anastomoses with other vessels and restoring blood flow. This process is important for the restoration of the flow of nutrients and oxygen to the site, removing waste, and transportation of leukocytes to the site. Without this, granulation tissue formation would be stunted and wound healing prolonged.

Myofibroblasts are responsible for the contractile process in wound closure. When granulation tissue is forming, fibroblasts slowly modulate into myofibroblasts, characterized by bundles of actin microfilaments along their cell's plasma membrane. Prostaglandins, bradykinins, epinephrine, and norepinephrine modulate the function of contraction by the myofibroblasts. Eventually, the actin binds to the extracellular component fibronectin, attaches to the collagen fibers, retracts, and draws collagen fibers toward it. The mass effect causes wound contraction and closure.

Neutrophils (first to the wound) and macrophages are the primary immune cells at the site of wounds that aid in wound healing and protect against invading pathogens. Both cell types are phagocytic, meaning that they engulf and ingest pathogens, debris, and damaged tissue, allowing for protection and healing.[1][2][3]

The process of wound healing is vastly different when comparing fetuses and adults. Fetal wound healing typically has minimal to no scarring, little to no inflammation (thought to be due to a lack of myofibroblasts), rapid epithelialization, high proportions of type III collagen, fast fibroblast migration, and less degranulation by fibroblasts.

During this stage of wound healing, the blood vessels at the site of injury contract, and the blood that leaked out through the wounds begin to coagulate and scab over. The coagulation process results from the aggregation of thrombocytes, forming a fibrin network. The fibrin network is the basis for a clot and serves as a temporary matrix for migrating cells. The thrombocytes release cytokines and growth factors that serve as pro-inflammatory signals to attract the immune response to the site of the wound.

Monocytes arrive at the site of injury within two days, where they differentiate into macrophages. The role of macrophages is to phagocytose debris, pathogens, and neutrophils while also producing chemical mediators (TGF-beta and VEGF) that serve to recruit fibroblasts and endothelial cells that mark the next stage of healing. During this stage, the site of injury becomes erythematous and edematous. This stage takes about 72 hours to complete.

During this stage of healing, re-epithelialization and the replacement of the clot by granulation tissue occurs simultaneously. This stage is highly cellular with the primary cell types, including fibroblasts, keratinocytes, and endothelial cells. Fibroblasts function to synthesize collagen and the extracellular matrix. The granulation tissue itself is made up of extracellular matrix, proteoglycans, hyaluronic acid, collagen, and elastin. Cytokines and growth factors, interleukins, and angiogenesis factors are active during this time, which can continue anywhere from days to weeks under normal circumstances. Granulation tissue grows from the base of the wound and can typically fill any size wound. Any errors in the formation of granulation tissue can result in chronic wound formation. Foreign bodies at the site of a wound can also result in persistent granulation tissue and poor wound healing with excess macrophages, fibroblasts, and capillaries reacting around the foreign material.

The last stage of wound healing involves apoptosis and the production of new cells. The apoptosis and degradation of the extracellular matrix and immature type III collagen and the ultimate formation of mature type I collagen are critical to scar formation, integrity, and strength. This stage can continue from months to years. If there are errors during this phase, there may be excessive wound healing leading to hypertrophic or keloidal scarring or a chronic wound resulting in persistent granulation tissue.

Healthy granulation tissue appears pink to red due to new capillary formation, is soft to the touch, moist appears “bumpy,” and typically painless. Unhealthy granulation tissue is darker red, bleeds easily with minimal contact, painful, and maybe covered by shiny white or yellow fibrous tissue that is avascular, impeding healing. When granulation tissue appears “unhealthy,” an infectious process or poor healing should be suspected. Wound culture and appropriate treatment according to the culture results should be completed as soon as possible. Once the infection is ruled out or cleared, some chronic wounds may respond to simple cautery with silver nitrate or with topical steroid preparations, while those with the overlying fibrous tissue will require debridement with a curette or scalpel to allow for healing.[1][2][3][4][5][6][7]

Wound healing can become prolonged under several circumstances. The pathophysiology of wound healing, resulting in excess and unhealthy granulation tissue and chronic wounds are complex. The causes may include infection at the site of the wound resulting in excessive recruitment of inflammatory cells. Infections result in increased release of reactive oxygen species that are damaging to the tissue and can also result in the formation of biofilms, which contribute to poor wound healing and are caused by bacterial toxins. Infections can lead to further complications, including abscess, cellulitis, osteomyelitis, and loss of limbs.

Necrosis, poor perfusion, and poor nutrition/metabolism due to insufficient blood supply due to the trauma itself, poor angiogenesis, and underlying conditions (diabetes and vascular insufficiency) are also sources of chronic wounds and persistent granulation tissue.[1][2][3][4][8]

Granulation tissue may persist under several circumstances resulting from underlying conditions and/or errors in the stages of wound healing (errors in the proliferative phase and remodeling phase).[1][2][3][4][6][9][8]

Granulation tissue can also present in: 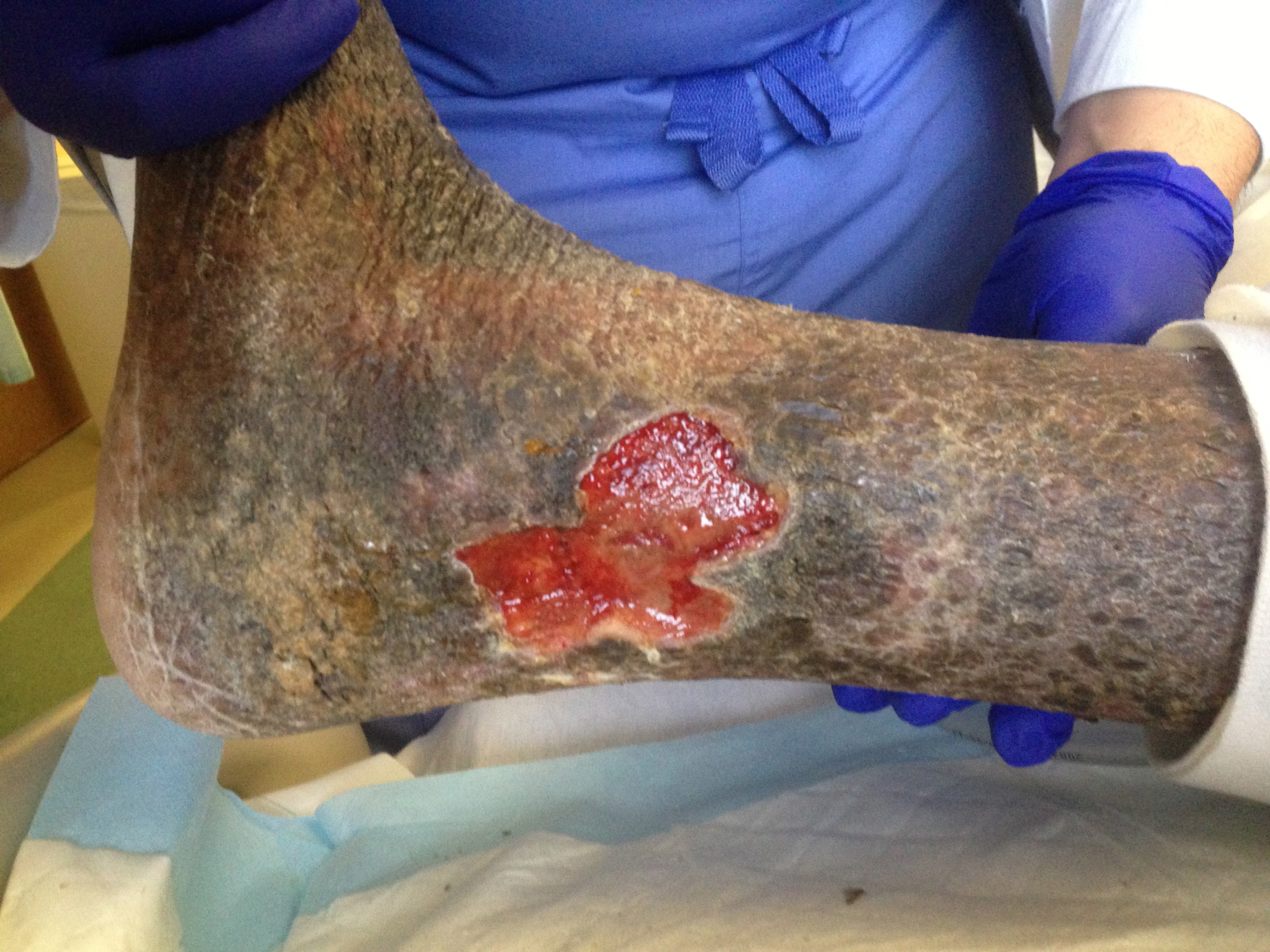 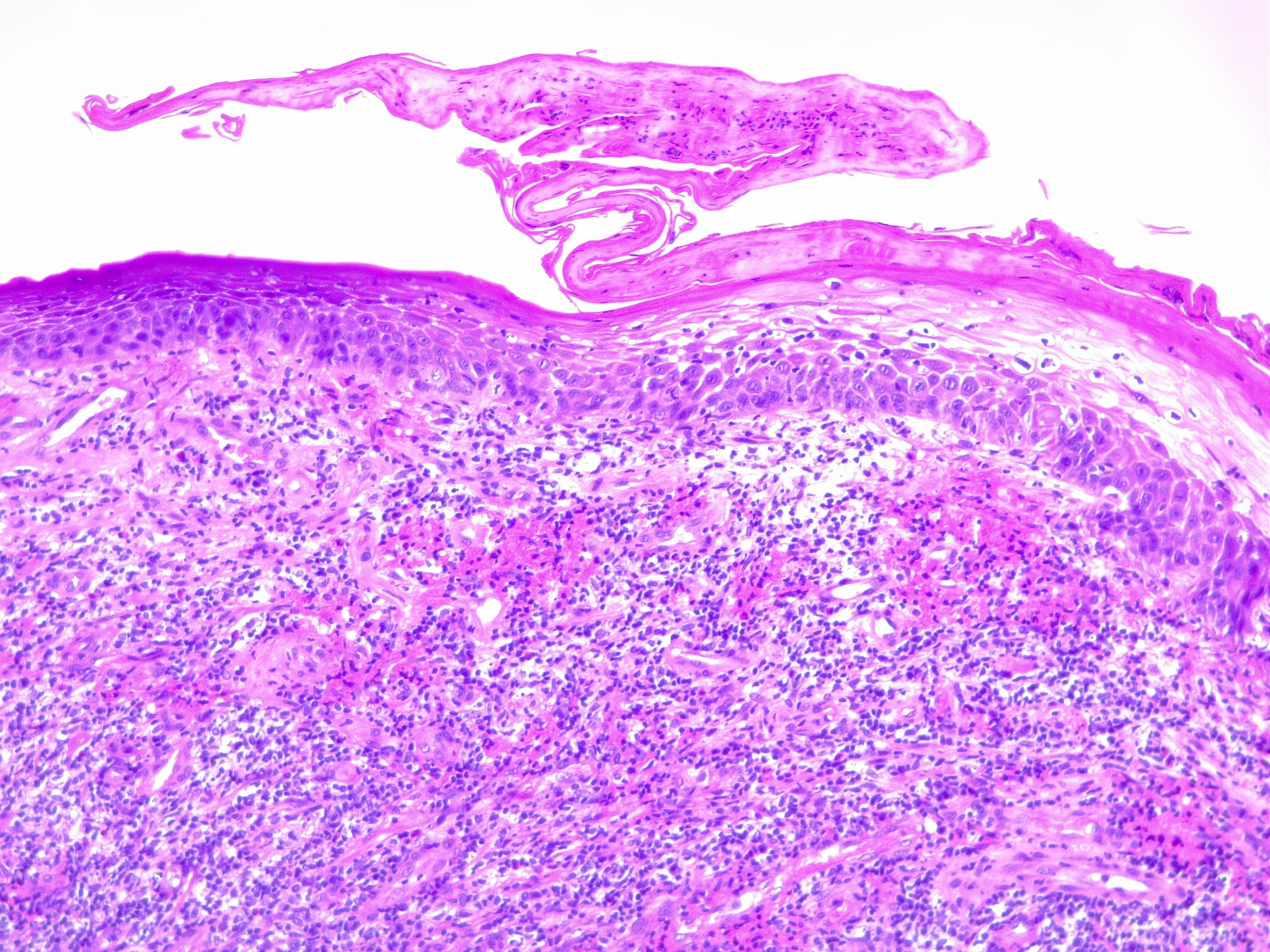 Pyogenic granuloma H/E 10x. The lobular morphology is changed by secondary ulceration and inflammatory changes. In this picture the epidermis is ulcerated and neutrophil are widely occupying the lesion. An epidermal collarette is present over a true granulation tissue of the dermis.
Contributed by Fabiola Farci, MD 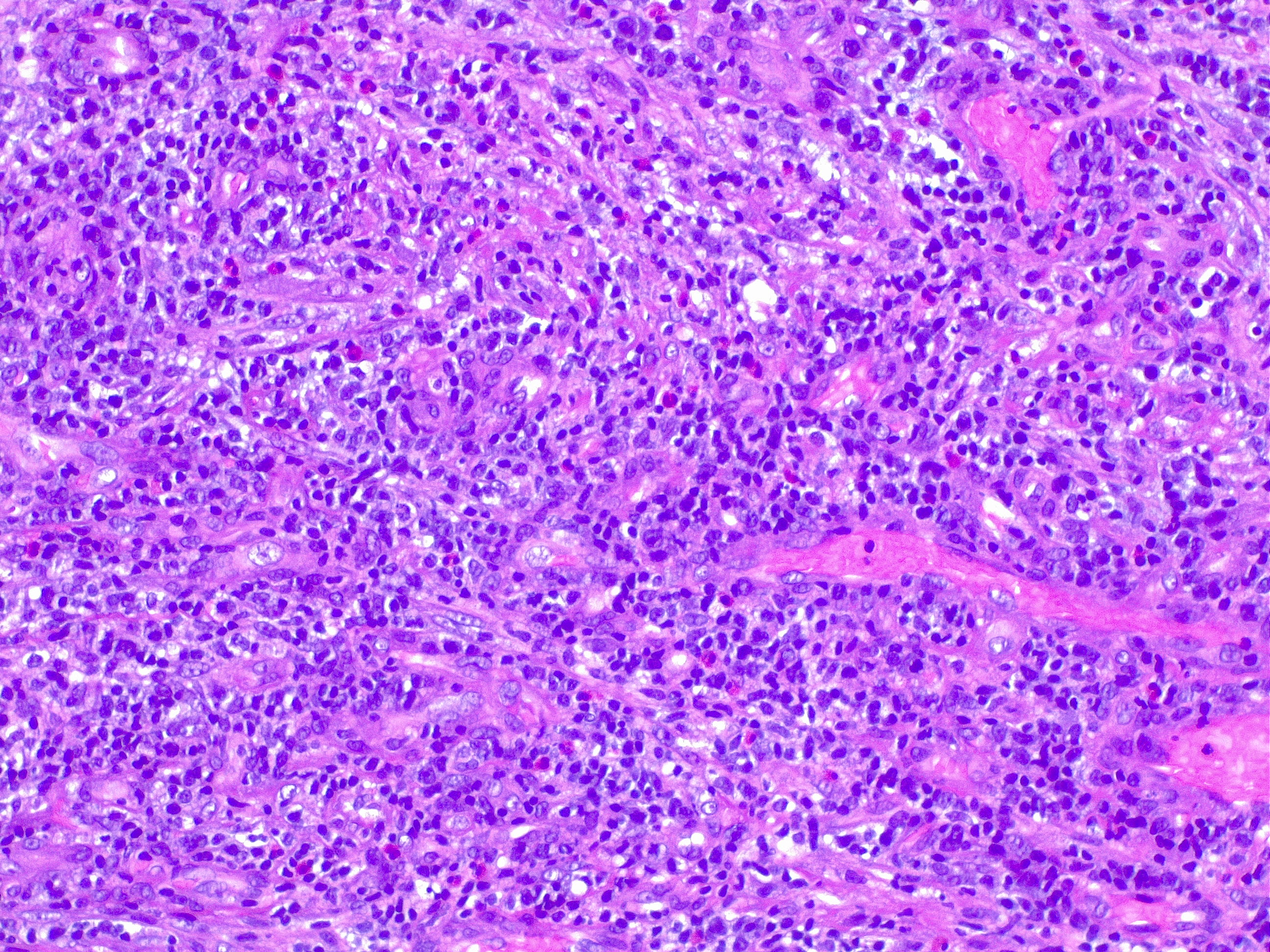