Goiter is the enlargement of the thyroid gland. Nontoxic goiter is thyroid gland enlargement with no disturbance in the thyroid function. It is not due to inflammation or neoplasia. Abnormalities of iodine supplies or metabolism always lead to nontoxic goiter. The thyroid gland secretes thyroid hormones (Thyroxin/T4 and triiodothyronine/T3) in response to thyrotropic hormone (TSH) of the pituitary gland stimulation. They are important for body cells' metabolism. It also secretes the calcitonin hormone that has an important role in calcium metabolism. With decreased thyroid hormone production due to iodine deficiency as an example, TSH release will increase and this, in the long-term, will lead to thyroid follicles hyperplasia and as a result increase in thyroid gland size. This activity reviews the evaluation and treatment of nontoxic goiter and highlights the role of the interprofessional team in evaluating and treating this condition.

Goiter is the enlargement of the thyroid gland. Nontoxic goiter is thyroid gland enlargement with no disturbance in the thyroid function. It is not due to inflammation or neoplasia. The goiter may be diffuse or a localized growth. If the goiter is large, it may extend into the retrosternal space. Because of the limited space in the mediastinum, the goiter can cause compression of the upper trachea, laryngeal nerves, and esophagus.

Abnormalities of iodine supplies or metabolism always lead to nontoxic goiter. The thyroid gland normally weighs about 25 grams. It is a butterfly-shaped gland located in the anterior triangle of the neck just in front of the larynx and trachea. It is composed of the right and left lobes with a connecting isthmus. The isthmus lies against the second and the third tracheal rings with the lobes extending on either side, from the thyroid cartilage superiorly to the fourth tracheal ring inferiorly. The thyroid gland secretes thyroid hormones (Thyroxin/T4 and triiodothyronine/T3)  in response to thyrotropic hormone (TSH) of the pituitary gland stimulation. They are important for body cells' metabolism. It also secretes the calcitonin hormone that has an important role in calcium metabolism. With decreased thyroid hormone production due to iodine deficiency as an example, TSH release will increase and this, in the long-term, will lead to thyroid follicles hyperplasia and as a result increase in thyroid gland size.

Nontoxic goiter can be diffuse or multinodular. It occurs due to many causes: [1][2][3][4]

The thyroid hormone is synthesized from iodine. Iodine is present in soil and is ingested in food that absorbs iodine from the soil. In mountainous areas and rainy environments, iodine is washed from the land, and the soil may become deficient in iodine. This explains why inhabitants of these areas are at greater risk for developing goiter due to low dietary iodine they consume. There is evidence that giving iodine as a supplement decreases the incidence of goiter in these people. Seminal studies confirmed that supplementation of iodine in table salts decreases the risk of endemic goiter from 20% to 5% in the adolescent girls of Ohio. In the United States, sporadic goiter is the most common cause of nontoxic goiter where it's incidence is about 5%.

The deficiency of iodine or increasing demands for thyroid hormones leads to pituitary gland stimulation that increases TSH secretion. TSH stimulates thyroid follicular cells and with continuous long-term stimulation leads to follicular hyperplasia and thyroid enlargement. When iodine is supplied again or when thyroid hormone deficiency is corrected thyroid gland may decrease in size due to decreased TSH levels and the thyroid gland is not more stimulated.

In cases of diffuse goiter, there will be follicular cells hyperplasia. In the chronic settings with the continued TSH stimulus, some follicles become autonomous and secrete hormones that will depress other areas which will involute. This will lead to multinodular goiter with areas of focal hyperplasia and areas of involution and fibrosis.

Most of the nontoxic goiter patients are asymptomatic. The swelling may be discovered accidentally by the patient or others. Some individuals may have compressive symptoms like dysphagia, dyspnea, and hoarseness of voice due to mechanical compression of laryngeal nerves by the nearby huge goiter. Large thyroids may compress neck veins leading to facial congestion and discomfort. Pain is rare and it may be severe and incremental when there is bleeding in a nodule and it may be associated with sudden changes in the goiter.

On physical examination, there will be a central neck swelling that could be smooth or nodular and the mass moves with swallowing. It may deviate the trachea or extend retrosternally. Any cervical lymphadenopathy should suggest malignancy: a workup is warranted. Vocal cords must be examined in cases of hoarseness or before and surgical intervention.

When the patient is asked to elevate the arms, it lifts the goiter into the thoracic inlet and may cause stridor, dyspnea or enlargement of the neck veins (Pemberton maneuver). [6][7][8]

Initially, TSH, free T4, and T3 should be measured to assess whether the patient is thyrotoxic, subclinically toxic, hypothyroid, or euthyroid. Then ultrasonography (US) must be done to assess nodules. Features that make nodules suspicious are hypoechogenicity, microcalcification, hypervascularity, and if there are solid components of complex nodules. In these situations, fine needle aspiration cytology under US guidance is recommended. A chest x-ray is useful in assessing retrosternal goiter and if there any tracheal deviation. Sometimes computerized tomography (CT) scan or magnetic resonance imaging (MRI) are useful in describing anatomical relations regarding tracheal deviation, airway compression, retrotracheal, or retrosternal extension. [9][10]

Radionuclide scanning can be used to assess thyroid anatomy and function.

Nontoxic goiter usually evolves slowly and asymptomatic, so it needs no treatment and left for follow up. Medical therapy for nontoxic goiter is controversial as it has little or no results in longstanding goiters. [11][12][13]

Some goiters may respond to levothyroxine therapy but close monitoring of the patient is required to avoid arrhythmias, hyperthyroidism, and bone thinning. However, thyroid hormone therapy is not recommended if the goiter is autonomous.

Non-emergent surgical treatment is indicated in patients with compressive symptoms or complications. Thyroidectomy is indicated in retrosternal goiter even if asymptomatic because delaying treatment to symptoms appearance may need more complicated surgical procedures. However, the patient's preoperative workup should be thorough. If the surgery is an emergency for an active goiter, the patient will require beta-blockers, antithyroid medications and a stress dose of corticosteroids. Close monitoring is required intra-and postoperatively. A common complication postoperatively is hypocalcemia.

Radioiodine ablation is another modality of therapy that can lead to goiter involution but has more complications.

Thyroidectomy is the mainstay of nontoxic goiter that is causing symptoms or complications. It is always tolerated by most patients including those with limited functional reserve. It must include total or near-total gland excision. It has the advantage that the recurrence rate is quietly low. However, many complications may occur during or after thyroidectomy including recurrent laryngeal nerve injury and hypoparathyroidism. Also, the patients who undergo total thyroidectomy need long-life thyroid supplements.

Medical therapy for nontoxic goiter depends on TSH suppression using thyroxine. However, it has been shown that medical therapy has been ineffective in reducing goiter size especially those who have been for a long time.

A non-toxic goiter is a benign entity and only causes aesthetic problems. However, if the size is large, it may compress the trachea, laryngeal nerves, and the esophagus. Most benign goiters have an excellent prognosis. A small percentage may cause hyperthyroidism and some may become malignant, hence life long surveillance is necessary. In people with compression, after surgical removal, the tracheal narrowing reverses and results in improved lung function.

Large goiters may cause:

Nontoxic goiter is not an uncommon disorder especially in iodine-deficient areas that can be prevented with consumption of iodine-containing salt. If present, it must be followed unless it causes symptoms or complications. Exclusion of malignancy is an important issue, and any suspicious nodule mandates tissue biopsy.

Goiters are not very common in the USA because of the fortification of the salt with iodine. However, when they do occur, their management can be difficult depending on their size and functional status. Thus, these lesions are best managed by an interprofessional team that includes clinicians, nurse specialists, pharmacists and surgeons. Goiters usually come to clinical attention when they are large; at this point, the clinician should first determine if the patient has symptoms and if the goiter is functioning.

Most nontoxic goiters can be managed with conservative care but large ones may require surgical excision. Others may require a trial of levothyroxine therapy. The pharmacist should educate the patient on symptoms of hyper and hypothyroidism which may occur following the use of levothyroxine and surgery, respectively.  These patients need to be followed up for several months to ensure that the TSH has stabilized. However, long term monitoring is necessary as some goiters may become hyperactive or become malignant. The primary care providers and nurse practitioners should examine these patients thoroughly so that no complication is missed. If the thyroid function tests fail to stabilize, the patient should be referred to an endocrinologist for further workup.

The outcomes for most patients with a goiter are excellent. 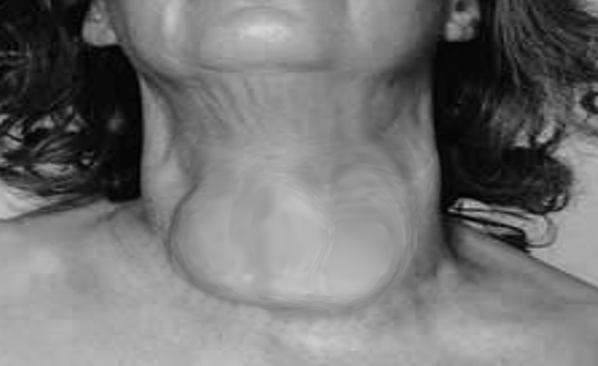 Bahn RS,Castro MR, Approach to the patient with nontoxic multinodular goiter. The Journal of clinical endocrinology and metabolism. 2011 May     [PubMed PMID: 21543434]