Glucose is a 6-carbon structure with the chemical formula C6H12O6. It is a ubiquitous source of energy for every organism in the world and is essential to fuel both aerobic and anaerobic cellular respiration. Glucose often enters the body in isometric forms such as galactose and fructose (monosaccharides), lactose and sucrose (disaccharides), or starch (polysaccharide). Our body stores excess glucose as glycogen (a polymer of glucose), which becomes liberated in times of fasting. Glucose is also derivable from products of fat and protein break-down through the process of gluconeogenesis. Considering how vital glucose is for homeostasis, it is no surprise that there are a plethora of sources for it.

Once glucose is in the body, it travels through the blood and to energy-requiring tissues. There, glucose is broken down in a series of biochemical reactions releasing energy in the form of ATP. The ATP derived from these processes is used to fuel virtually every energy-requiring process in the body. In eukaryotes, most energy derives from aerobic (oxygen-requiring) processes, which start with a molecule of glucose. The glucose is broken down first through the anaerobic process of glycolysis, leading to the production of some ATP and pyruvate end-product. In anaerobic conditions, pyruvate converts to lactate through reduction. In aerobic conditions, the pyruvate can enter the citric acid cycle to yield energy-rich electron carriers that help produce ATP at the electron transport chain (ETC).[1]

Glucose reserves get stored as the polymer glycogen in humans. Glycogen is present in the highest concentrations in the liver and muscle tissues. The regulation of glycogen, and thus glucose, is controlled primarily through the peptide hormones insulin and glucagon. Both of these hormones are produced in the pancreatic Islet of Langerhans, glucagon in from alpha-cells, and insulin from beta-cells. There exists a balance between these two hormones depending on the body's metabolic state (fasting or energy-rich), with insulin in higher concentrations during energy-rich states and glucagon during fasting. Through a process of signaling cascades regulated by these hormones, glycogen is catabolized liberating glucose (promoted by glucagon in times of fasting) or synthesized further consuming excess glucose (facilitated by insulin in times of energy-richness). Insulin and glucagon (among other hormones) also control the transport of glucose in and out of cells by altering the expression of one type of glucose transporter, GLUT4.[1][2]

The final products of the carbohydrate digestion in the alimentary tract are almost entirely glucose, fructose, and galactose, and the glucose comprises 80% of the end product. After absorption from the alimentary canal, much of the fructose and almost all of the galactose is rapidly converted into glucose in the liver. Therefore only a small quantity of fructose and galactose is present in the circulating blood. Thus glucose becomes the final common pathway for the transport of all of the carbohydrates to the tissue cells.

In liver cells, appropriate enzymes are available to promote interconversions among the monosaccharides- glucose, fructose, and galactose. The dynamics of the enzymes are as such when the liver releases the monosaccharides, the final product always glucose. The reason is that the hepatocytes contain a large amount of glucose phosphatase. Therefore the glucose-6-phosphate can be degraded to the glucose and the phosphate, and the glucose can be transported through the liver cell membrane back into the blood.

Glucose has a vital role in every organ system. However, there are select organs that play a crucial role in glucose regulation.

The liver is an important organ with regards to maintaining appropriate blood glucose levels. Glycogen, the multibranched polysaccharide of glucose in humans, is how glucose gets stored by the body and mostly found in the liver and skeletal muscle. Try to think of glycogen as the body's short-term storage of glucose (while triglycerides in adipose tissues serve as the long-term storage). Glucose is liberated from glycogen under the influence of glucagon and fasting conditions, raising blood glucose. Glucose is added to glycogen under the control of insulin and energy-rich conditions, lowering blood glucose.

The thyroid gland is responsible for the production and release of thyroxine. Thyroxine has widespread effects on almost every tissue of the body, one of which being an increase in blood glucose levels through mechanisms described below.[9]

The anterior pituitary gland is responsible for the release of both ACTH and growth hormone, which increases blood glucose levels through mechanisms described below.[10]

There are many hormones involved with glucose homeostasis. The mechanisms in which they act to modulate glucose are essential; however, at the very least, it is essential to understand the net effect that each hormone has on glucose levels. One trick is to remember which ones lower glucose levels: insulin (primarily) and somatostatin. The others increase glucose levels.

The pathology associated with glucose often occurs when blood glucose levels are either too high or too low. Below is a summary of some of the more common pathological states with associations to alterations in glucose levels and the pathophysiology behind them.

Hyperglycemia can cause pathology, both acutely and chronically. Diabetes mellitus I and II are both disease states characterized by chronically elevated blood glucose levels that, over time and with poor glucose control, leads to significant morbidity. Both classes of diabetes have multifocal etiologies: type I is associated with genetic, environmental, and immunological factors and most often presents in pediatric patients, while type II is associated with comorbid conditions such as obesity in addition to genetic factors and is more likely to manifest in adulthood. Type I diabetes results from autoimmune destruction of pancreatic beta-cells and insulin deficiency, while type II results from peripheral insulin resistance owing to metabolic dysfunction, usually in the setting of obesity. In both cases, the result is inappropriately elevated blood glucose, which causes pathology by a variety of mechanisms:

These mechanisms lead to a variety of clinical manifestations through both microvascular and macrovascular complications. Some include peripheral neuropathies, poor wound healing/chronic wounds, retinopathy, coronary artery disease, cerebral vascular disease, and chronic kidney disease. It is imperative to understand the mechanisms behind the pathology caused by elevated glucose.[12][13]

Hypoglycemia is most often seen iatrogenically in diabetic patients secondary to glucose-lowering drugs. This condition occurs, especially in the inpatient setting, with the interruption of the patient's usual diet. The symptoms are non-specific, but clinical findings such as relation to fasting or exercise and symptom improvement with glucose administration make hypoglycemia more likely. Hypoglycemia symptoms can be described as either neuroglycopenic, owning to a direct effect on the CNS, or neurogenic, owing to sympathoadrenergic involvement. Neurogenic symptoms can be further broken down into either cholinergic or adrenergic. Below are some common symptoms of hypoglycemia:

Tying what we have learned about glucose together in a brief overview of glucose metabolism consider that you eat a carbohydrate-dense meal. The various polymers of glucose will be broken down in your saliva and intestines, liberating free glucose. This glucose will be absorbed into the intestinal epithelium (through SGLT receptors apically) and then enter your bloodstream (through GLUT receptors on the basolateral wall). Your blood glucose level will spike, causing an increased glucose concentration in the pancreas, stimulating the release of pre-formed insulin. Insulin will have several downstream effects, including increased expression of enzymes involved with glycogen synthesis such as glycogen synthase in the liver. The glucose will enter hepatocytes and get added to glycogen chains. Insulin will also stimulate the liberation of GLUT4 from their intracellular confinement, which will increase basal glucose uptake into muscle and adipose tissue. As blood glucose levels begin to dwindle (as it enters peripheral tissue and the liver), insulin levels will also come down to the low-normal range. As the insulin level falls below normal, glucagon from pancreatic alpha-cells will be released, promoting a rise in blood glucose via its liberation from glycogen and via gluconeogenesis; this will usually increase glucose levels enough to last until the next meal. However, if the patient continues to fast, the adrenomedullary system will join in and secrete cortisol and epinephrine, which also works to establish euglycemia from a hypoglycemic state.[16][5][17] 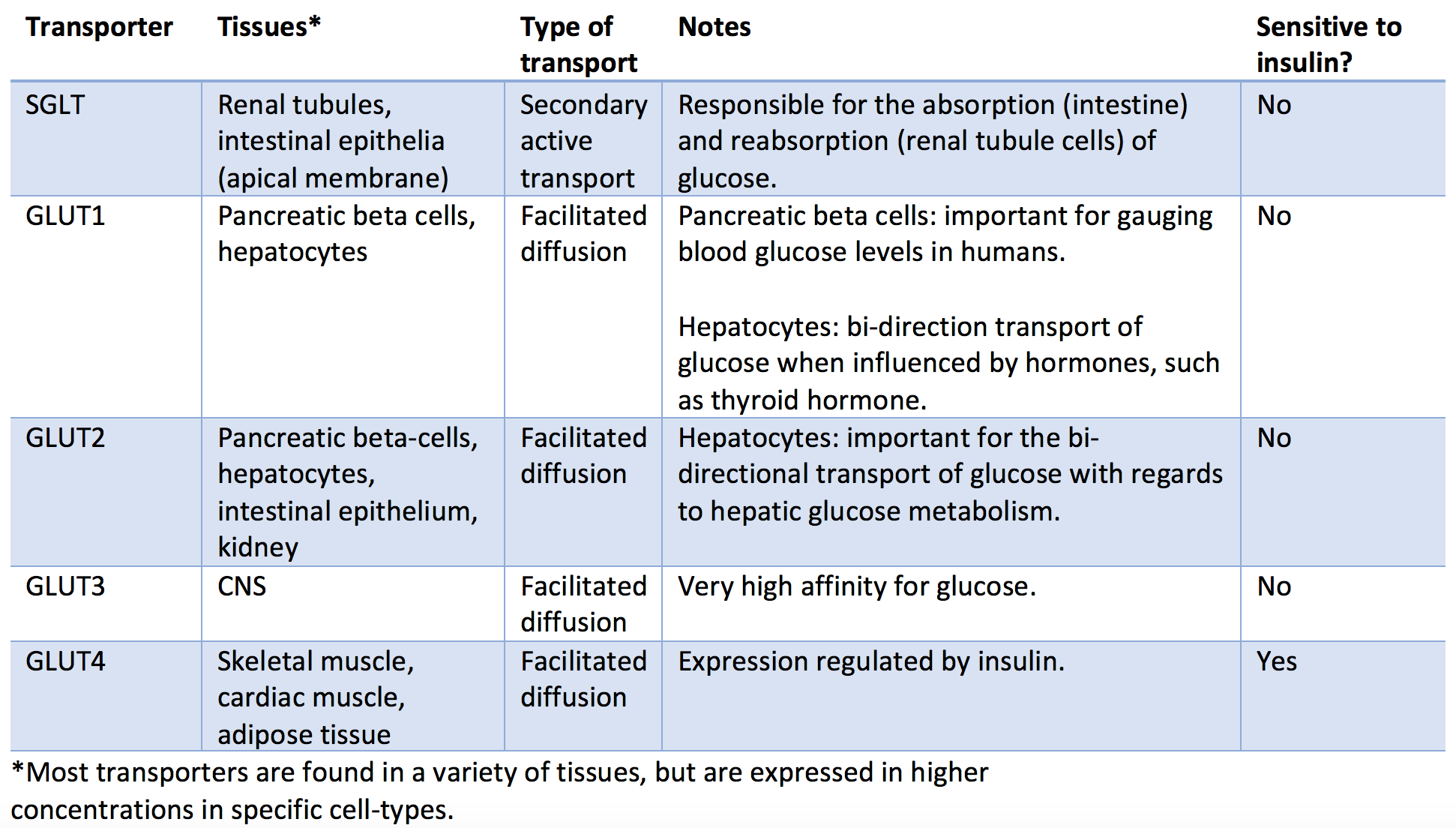 Nawale RB,Mourya VK,Bhise SB, Non-enzymatic glycation of proteins: a cause for complications in diabetes. Indian journal of biochemistry     [PubMed PMID: 17285797]