The function of the ventricles of the brain is to produce and transmit CSF fluid into the spinal canal, ventricular system, and the subarachnoid space. The choroid plexus produces the majority of CSF, along with the ependymal cell layer of the ventricles and cells lining the subarachnoid space.[2][3] Although the lateral ventricles produce the most CSF due to their larger surface area, CSF gets produced in all of the ventricles. CSF provides physical support to the brain, absorbs shock during trauma, keeps neurons in homeostasis, provides nutrition, and contains immune cells to help fight off infections of the nervous system.[1]

The fourth ventricle is the most inferiorly located ventricle, draining directly into the central canal of the spinal cord. Superiorly, it connects to the third ventricle through a thin canal called the cerebral aqueduct of Sylvius. It is surrounded anteriorly by the pons and medulla, posteriorly by the cerebellum, and inferiorly by the spinal canal and spinal cord. At its superolateral portions, two channels drain CSF into the surrounding neural tissue. These are called the lateral apertures, or the foramina of Luschka. Inferomedially is the median aperture or the foramen of Magendie. These apertures help spread CSF around the spinal cord and the surrounding neural structures. All of the CSF that does not drain out of these apertures goes into the central canal of the spinal cord.

As discussed earlier, many important structures surround the fourth ventricle, namely the pons and medulla of the brainstem, as well as the cerebellum. This anatomic arrangement makes accessing the fourth ventricle very difficult, especially when trying to remove a tumor without severely impacting the rest of the surrounding brain.

In the past, access to lesions of the fourth ventricle was through the cerebellar cortex by opening the cerebellar vermis; this was called the transvermian approach. However, this was shown to lead to disturbances of equilibrium and cerebellar mutism, most likely from damaging the median and paramedian cerebellar structures.[6]

Now, a method called the telovelar approach is gaining favor; this is performed by accessing the fourth ventricle through the cerebellomedullary fissure, a space between the cerebellum and medulla oblongata. This functions as a natural track into the ventricular cavity. The tela choroidea and the inferior medullary velum, which make up part of the roof of the fourth ventricle, come into visualization and can be opened after elevating the cerebellar tonsils. This approach allows surgeons to access the fourth ventricle without dissecting through neural tissue, thus causing less damage.[6] It is important that after these types of surgeries, an external ventricular drainage (EVD) device is kept in for 2 to 3 days to check on intracranial pressures and facilitate wound closure. After this, the EVD is closed for 2 days, and then a CT scan of the head is performed to measure ventricle size and assess if there is hydrocephalus or leakage into the brain.[7][8][7]

Ependymomas are the third most common pediatric brain tumors but only account for 1.9% of adult primary brain tumors. They are CNS malignancies that originate from the ependymal cell lining of the ventricles. Many different types of ependymomas differ in location and histopathology. Subependymomas, also known as WHO grade I ependymomas, mostly occur within the fourth ventricle or the lateral ventricles. They are characterized histologically by a nodular pattern with zones of increased nuclear density or fibrillary stroma.[9] Although these tumors are very treatable, there are often lasting morbidities from surgery to remove these tumors.[10]

Hydrocephalus is the presence of too much CSF in the brain, which often results from a problem with CSF absorption that occurs after an insult has impaired the arachnoid granulations from correctly reabsorbing fluid. This condition is called “communicating hydrocephalus” because CSF is still able to flow throughout the ventricular system, but it is not getting absorbed as efficiently as it needs to be. Conversely, a blockage in the ventricular system by a tumor or cyst will cause “obstructive hydrocephalus,” or noncommunicating hydrocephalus. This means that there is obstruction of the flow of CSF, so it becomes trapped in the ventricles causing swelling of the ventricles proximal to the lesion.[11]

A condition called fourth ventricle outlet obstruction (FVOO) is a type of noncommunicating hydrocephalus that occurs when there is a disconnect between the subarachnoid space and the ventricular system. This can result from a tumor or cyst blocking the lateral or median apertures and will cause enlargement of the entire ventricular system since this is the distal-most ventricle. It is also often caused by inflammatory processes following hemorrhage, infectious disease, or congenital anomalies of the fourth ventricle. To diagnose FVOO, additional studies such as those on a three-dimensional constructive interface in steady-state (3D-CISS) are often necessary.[12]

Dandy-Walker malformation (DWM) or syndrome characteristically demonstrates a cystic enlargement of the fourth ventricle and agenesis or hypoplasia of the cerebellar vermis. Most patients will present with hydrocephalus, but it often remains clinically asymptomatic for years. It can either be isolated or associated with Mendelian disorders, syndromic malformations, chromosomal abnormalities, and congenital infections. CNS disorders associated with DWM include holoprosencephaly, neural tube defects, and dysgenesis of the corpus callosum.[13][13][13] 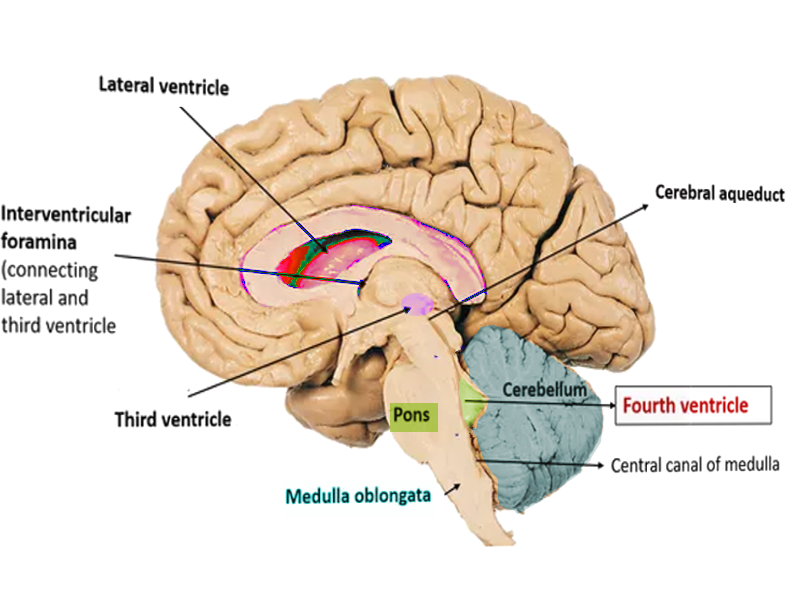 Sharifi M,Ciołkowski M,Krajewski P,Ciszek B, The choroid plexus of the fourth ventricle and its arteries. Folia morphologica. 2005 Aug;     [PubMed PMID: 16228955]