The foramen ovale is an opening or shunt in the heart tissue allowing blood to flow from the right atrium to the left atrium during fetal development. Blood oxygenated at the placenta is shunted away from the pulmonic circulation via this structure as the lungs are collapsed and not functioning and bathed in amniotic fluid.[1] When born, the ventilatory efforts by the neonate expands the lung resulting in an acute dramatic decrease in the intrathoracic pressure and permits a greater flux of blood to perfuse the pulmonary vessels. Higher pressure in the left atrium resulting from increased pulmonary venous flow from the lungs causes the septum primum of the interatrial septum to close the opening. Over time, the tissue will seal the foramen and become the fossa ovalis.

The foramen ovale is an aperture in the muscular tissue between the left and right atrium that allows blood to cross the atria and bypass pulmonary circulation during fetal development. The surrounding tissue is composed of smooth muscle-derived from the septum primum and septum secundum.[2] Since blood is oxygenated at the placenta and travels through the inferior vena cava to the right atrium, the fetal lungs are collapsed and bathed in amniotic fluid. They are not necessary for gas exchange during pregnancy.[1] In turn, the foramen ovale is the primary shunt to circumvent blood away from the lungs. The blood can pass through the right atrium and enter the left atrium through the foramen ovale through a pressure gradient. The collapse of the pulmonary arteries stops pulmonary circulation and increases the right atrial and ventricular pressures.[3] Downstream of the pulmonary circulation, the left atrium will not receive pulmonary venous blood and will have a lower pressure in the chamber. The higher relative pressure gradient of the right atrium will allow the blood to push against the tissue flap of the ostium primum and shuttle the blood into the left atrium. Effectually, the blood moves into the left ventricle and through the aorta to enter the systemic circulation.

During heart development, the atria are separated from one another by the formation of an interatrial septum. The process of septation of the atria generally begins after the first four weeks of pregnancy and promotes the growth of distinct left and right atria.[2]

Initially, muscular tissue originating from where the right atrium would be situated begins to expand. This unidirectional growth of the septum primum with a mesenchymal cap towards the endocardial cushion is the first step towards septation and the creation of the left and right atria.[4] The endocardial cushion is a collection of cells located in the center of the heart, a site where the ventricles will become partitioned and from where the atrioventricular values will develop. As the interatrial septum proliferation (septum primum) reduces the orifice between the atria, the process of tissue growth promotes an ostium primum, a diminishing opening between atria located near the endocardial cushion. In unison, as the ostium primum becomes occluded from the developing muscular tissue towards the endocardial cushion, a portion of the interatrial septum superior to the ostium primum becomes porous through cell degeneration and creates a collective remnant opening between the left and right atria. Eventually, the porous slit above the ostium primum becomes a single orifice, denoted as the ostium secundum, the second opening formed in the process of developing the interatrial septum.

Blood gets drained from the heart by cardiac veins that meet at the coronary sinus on the posterior end of the heart and funnel into the right atrium.

Regarding the conduction pathway of cardiac action potentials, neurons that originate from the sinoatrial node pass through and along the interatrial septum to the atrioventricular node. Bachmann’s bundle allows signal transduction between the right and left atrium while multiple neuronal pathways connect the sinoatrial node, located at the top of the right atrium, to the atrioventricular node near the base of the interatrial septum.[7]

The size of the foramen ovale can vary between individuals. Generally, the foramen ovale is ovular and has been shown to occupy 33% of the whole developing atrial septum. Investigation shows that fetuses between 17.5 and 37 weeks in gestation with variances in the size of the foramen ovale have a risk of congenital defects. Those with lower ratios of foramen ovale size to atrial septum have associated left heart obstructive diseases, like coarctation of the aorta. On the other side, those with larger ratios have associated right heart obstructive issues, like Ebstein anomaly, pulmonic valve, or tricuspid valve abnormalities.[8][9]

Since the foramen ovale is a structure integral during the development of the fetus, the foramen ovale should self-resolve and is generally not t a consideration for surgery during pregnancy. In the extreme circumstances where surgery is recommended to prevent additional complications associated with a congenital defect, surgery to repair the atrial septum by connecting each part may be viable.

Patent foramen ovale (PFO) currently does not have a conclusive treatment method and is still in discussion to date.[10] Most patients with an incidental finding of an asymptomatic PFO do not require any treatment. In patients with a cryptogenic stroke, especially younger patients with no other vascular risk factors, treatment will be necessary, yet the treatment method is still controversial at this present moment. Medical therapies include most commonly antiplatelets with aspirin or clopidogrel. Percutaneous closure is gaining popularity with increasing success and less invasiveness resulting in much less frequent performance of open surgical closure. Most younger patients who presented with a cryptogenic stroke and larger PFO, especially when associated with an atrial septal aneurysm will be candidates for catheter closure of the PFO.[8][11]

Enlarged Ostium Secundum - If the ostium secundum is significantly large, the septum secundum may not be able to cover the ostium secundum completely. This morphological variant will allow a persistent opening between the right and left atrium. This abnormality is the most common form of an atrial septal defect.[2]

Patent Foramen Ovale (PFO) - This is the commonest congenital defect. In certain instances, the septum primum and the septum secundum may not fuse during infantile development, causing a persistent foramen ovale. Most of the time, this opening between atria is asymptomatic as the higher left atrial pressure will push the septum primum up against the septum secundum, reproducing the effects of the heart as if a fossa ovalis were present. However, a patent foramen ovale can lead to right-to-left shunting if the right atrial pressure becomes higher than the left atria, such as during Valsalva maneuver, which may cause a stroke via a paradoxical embolus.[12][10] While most patent foramen ovale is asymptomatic and non-life threatening, the prevalence of this remnant opening occurs in around 25% of individuals upon autopsy.[10] If the PFO is larger or when it is associated with an atrial septal aneurysm, the risk of paradoxical embolism and subsequent stroke will be considerably higher.[13] PFO also correlates with an increased prevalence of migraine. PFO is diagnosable with echocardiography, especially with agitated saline contrast. A transthoracic echocardiogram (TTE) can detect a right to left shunt with bubble contrast. A transesophageal echocardiogram (TEE) can also visualize the anatomy better including detection o the important associated atrial septal aneurysm. Transcranial doppler with bubble contrast is more sensitive than TEE in detecting a right to left shunt, yet it does not provide any clue on the site of the shunt.

While the foramen ovale does not serve a functional purpose in a healthy postpartum human, the anatomical structure plays an integral role in circulating blood during embryological development. Use of the opening between the atria allows the passage of oxygenated blood to enter the left atrium from the right atrium and to bypass the lungs, which have not fully matured during fetal development. Abnormalities in the development and closure of the foramen ovale can lead to blood flow irregularities. Such conditions can lead to a patent foramen ovale or other congenital atrial septal defects. However, in specific congenital developmental abnormalities, a right to left shunt is vital for a neonate to survive after birth. Specifically, total anomalous pulmonary venous return and tricuspid atresia are notable for neonates to have a shunt similar to that of a foramen ovale. 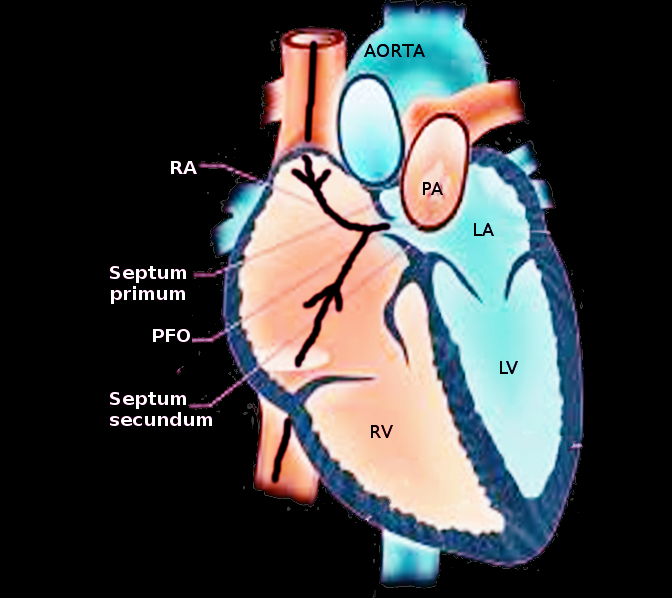