The definition of a surgical fire is one that occurs in, on, or around a patient undergoing a surgical procedure. Urologists, as with all surgeons, utilize and bring the components of the fire triangle into proximity, increasing the risk of a surgical fire. Three main components of the fire triangle are required for a surgical fire to take place: fuel source, oxidizer, and an ignition source.[1] The first component is a fuel source. Common fuel sources include degreasers, prepping agents, drapes, towels, sponges, dressings, tapes, gowns, hoods, masks, ointments, benzoin, aerosols, alcohol, mattress, pillows, blankets, ECG electrodes, hoses, tissue, GI gases.[2] The second component is an oxidizer. Common oxidizers are room air, oxygen, nitrous oxide.[2] Lastly, the third necessary component is an ignition source. Common ignition sources include a light source, laser, electrocautery, sparks from high-speed drills and burrs, defibrillators, glowing embers of charred tissue, flexible endoscopes, tourniquet cuffs.[2] Sources of each of these three components are often present close to the patient in the medical setting or operative suite.  A further risk factor for surgical fires is a high oxidizer level or elevated oxygen concentration greater than the normal atmospheric oxygen level of 21%. This risk is particularly high during head and neck, oral pharyngeal, and rectal surgeries, where higher oxygen levels or methane gas may be present.[3] Oxidizer levels cause a decrease in the ignition point temperature of fuels. Curiously enough, inhaled halogenated anesthetics are similar to halogenated fire extinguishing agents and are considered non-flammable and may actually be protective of endotracheal tube fires.[4] Nonetheless, the Emergency Care Research Institute (ECRI) has ranked surgical fires in their top ten technological hospital hazards to patients.[2]

Because surgical fires are preventable, surgeons are a necessary component in that prevention. Many recommendations have been put forth by the Food and Drug Administration, in conjunction with The Joint Commission, to assist in the prevention of surgical fires. Prevention can be broken down into two categories, preoperative and intraoperative strategies.

Education and knowledge are essential elements of preoperative prevention. The prevention begins with the monitoring of surgical equipment for damage or electrical concerns as well as the utilization of manufacturer specifications on device usage and maintenance for OR machines. Individual’s awareness and assessment of devices and the specific risks with devices such as laser, fiber optic light cord, electrocautery, are another necessary component for prevention. Knowledge regarding fire risks, including the fire triangle, as well as proper protocols for response to surgical fires, can help staff both eliminate the risks and address situational concerns if a fire arises.[6] All in all, good communication between all OR team members, including anesthesia, the surgical team, and the nursing team, coupled with other components, reduces the risk to the team and the patient in the OR setting. This communication typically begins with a surgical time out or briefing before procedure initiation.[2] By communicating prior to the procedure, members of the team have the opportunity to point out particular risk factors and discuss the sources of fuels, oxidizers, and specific ignition sources within a procedure.

Intraoperatively, prevention also requires specific actions and knowledge on the part of all individuals within the OR suite. For example, within the fire triangle, oxidizers used by anesthesia decreases ignition point temperature, which increases the risk of preventable fires. The fire triangle provides a simple system within the OR settings that can illuminate potentially unnoticed or unrecognized risks. This knowledge can be applied, for example, to result in the use of the lowest amount of oxygen to maintain the required oxygen saturation.[7] Additional mechanisms that can be utilized to prevent fires include the use of appropriate skin preparation techniques, including following manufacturer specifications for dry time on alcohol-based skin prep and preventing preparation fluid pooling.[8] Additionally, the proper use of surgical devices, such as re-holstering the cautery and minimizing cautery currents can reduce risk.[9] Lastly, A general awareness by staff regarding the number of instruments that generate heat, such as lasers and light cords used in endoscopic and laparoscopic cases by urologists, can also reduce the risk of fire. By applying this knowledge to all elements of the OR suite, the reduction in cross-contact between fuel sources, ignition sources, and oxidizers can significantly decrease the potential risks to the patient throughout a surgical procedure.

The importance of surgical fire prevention cannot be diminished and is an essential concern for surgeons. Surgical fires cause harm to the patient, increase adverse outcomes, increase the cost of health care, and are associated with significant litigation. Of 114 cases identified involving surgical fires, 60% of these resulted in a median award of $215000 to the plaintiff.[10] Given that OR fires can occur on or in the patient, the risk of substantial harm to the patient, rather than just to the surgical suite, heightens the need for prevention. Of particular concerns is that a fire on or in a patient can cause burns that may lead to irreversible tissue damage. This tissue damage occurs by denaturation and coagulation of proteins. With this damage, there is an activation of the inflammatory cascade which can cause vasoconstriction, vasodilation, increased capillary permeability, and edema locally, as well as at distant tissues.[11]

In addition to direct harm to the patient, fires that occur within the operative suite likely cause indirect harm in the form of smoke inhalation. Very few cases of urologic surgical fires appear in the literature. However, one case report involved a hypospadias repair where prep fluid ignited under the drapes causing first and second degree burns to the patient’s perineum.[12] A case series from Egypt involving greater than 82000 urological surgeries found 18 cases associated with surgical fires; six electrosurgical theater fires, seven contact burns, three electrosurgical internal injuries, and two electrocutions.[13] The number of surgical fires and burns in this series is quite high compared to an incidence of 0.32 to 0.63 per 10,000 operations as found by Clarke JR, Bruley ME.[13] Upon review of the literature within the United States, there are no reported surgical theater fires or electrocutions associated with urology, which may be attributed to variation in maintenance and monitoring of operating room devices. This data is contradictory to other data that shows 85% of the fires were reported to be in association with the airway or head and neck surgery.[7] The Egyptian data may be more accurate compared to data within the United States because of the variations in reporting in the United States.

Fortunately, the majority of fires occur at operative sites distant from the typical urologic operative sites. In addition, urologists utilize tools and techniques that both reduce the risk and contain risk factors. For example, urologists often operate using irrigation and iodine prep, both of which reduce the risk of operative fires. Urologists also often use many devices, such as light cords or flexible endoscopes, that can cause sparking. Within certain types of procedures, such as abdominal surgeries, urologists may conduct a bowel resection, which increases the risk of bowel gas ignition as well as electrocution. Another example may be the rare cases where a urologist operates above the xiphoid process for a buccal graft which exposes urologists to even higher risk due to proximity to oxygen delivery devices.

While surgical fires are avoidable and the hope is that they never occur, having a calculated and articulate response is still a necessary component in reducing harm. The risk to a patient could result in devastating consequences, and a swift and practiced response could reduce those risks to the patient and to the OR staff. The response varies with the location of the fire, the cause, and requires specific training as to each. An excellent step-by-step guide was created by ERCI that is useful when training OR staff (image 1). The step-by-step guide for fires on or in the patient requires the following action steps: Stop administration of supplemental gas, removal of the material that is on fire, and extinguish the active fire. Next, assess the patient and provide the necessary care. Lastly, if the fire cannot be controlled or contained, notify the appropriate individuals, and isolate the room.

An interprofessional team approach is required to prevent the outbreak of a surgical fire. Good communication between all the OR members is a must. Surgical time-out is the most critical time-point of detailing all the sources of fuels, oxidizers, and specific ignition sources within a procedure. 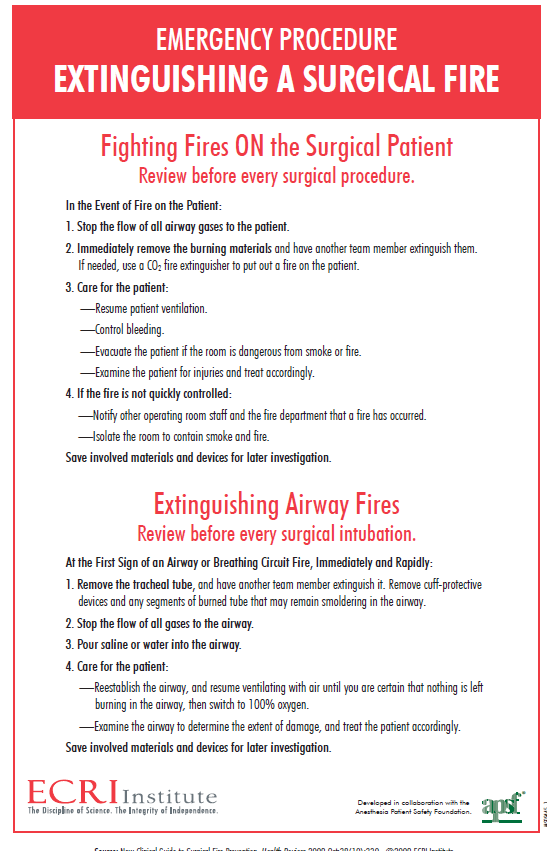