Filariasis is a disease caused by a chronic mosquito-borne parasitic infection. Chronic infection can lead to swelling of the extremities, hydroceles, and testicular masses.[1][2][3] It is the second-largest cause of permanent deformity and disability behind leprosy worldwide. Lymphatic filariasis (LF) is currently considered a neglected tropical disease. The Global Programme to Eliminate Lymphatic Filariasis is providing mass drug administrations (MDA) to populations in endemic areas in a push to eradicate this disease.[1] Several programs exist to encourage participation with MDA.

Filariasis is caused by at least three species of nematode parasites (Wuchereria bancrofti, Brugia malayi, and Brugia timori) and is transmitted to 5 genera of mosquitoes including Aedes, Anopheles, Culex, Mansonia, and Ochlerotatus.[1]

It affects 120 million people in 72 countries worldwide, mostly in the tropics and subtropical climates of Asia, Africa, the Western Pacific, South America, and the Caribbean. Four countries in America are endemic: Haiti, Dominican Republic, Guyana, and Brazil [4]. One-third of children in endemic regions are asymptomatically infected with W. bancrofti.[5] Half of the patients infected are in their 30s or 40s, and there is a 10:1 predilection for men to women.[6]

Humans are the primary reservoir for this parasitic disease, and mosquitoes are the vector. The mosquito deposits larvae into the bloodstream. They take up residence in the lymph nodes and grow into adult worms. The larvae have a predilection to deposit in femoral lymph nodes. They undergo sexual reproduction, and females give birth to countless microfilariae, which are dumped into circulation in a diurnal pattern. Females can give off eggs for approximately 5 years, and adults can live up to 9 years.[6] With the proliferation of adult worms, the lymphatics become occluded, which disrupts the lymphatic drainage and increases the susceptibility to repeated infections - most notably streptococcal and fungal infections. This acute-on-chronic inflammation leads to fibrosis and remodeling of the lymphatics, further perpetuating contractile dysfunction and leading to the dermal skin changes seen with elephantiasis.[6][7]

Brugia and Wuchereria species are similar in morphology and are the main cause of filariasis. They can be identified to the genus level using size, body wall composition, thickness, and morphology of the cuticle. The presence of small filarial worms in lymph nodes is pathognomonic for either Wuchereria or Brugia. Adult worms are typically found in lymph nodes in the groin or neck, whereas microfilariae are typically found in the peripheral blood.[8]

The adult worms typically range in size from 45 to 100 micrometers in diameter and are typically found in lymph node cross-section. Their descriptions include "thin, smooth cuticle which is thickened over lateral chords, three or four well-developed, low, broad muscle cells per quadrant, and relatively broad, flat lateral chords."[8]

Microfilariae can be seen with a blood smear or other peripheral blood sample that is stained with either Giemsa or hematoxylin and eosin (H&E) stain. The blood samples should be taken after 8 pm. The microfilariae vary in size from 200 to 300 micrometers in length and 2 to 8 micrometers in diameter and are identified by the terminal and subterminal nuclei in the tail region.[8]

The most common condition of filariasis is a hydrocele.[6] Children are often asymptomatic and typically present after the onset of puberty and likely into the 2nd or 3rd decade of life.[6][9]

Filarial abscess - may form causing localized swelling and pain until rupture, which results in the discharge of dead adult worms. Granulomatous reactions can lead to lumps in subcutaneous tissues.[6]

Lymphedema - graded based on the extent of the condition

Peripheral smear – The Centers for Disease Control (CDC) recommends preparing two thick and thin peripheral blood smear samples taken from either venipuncture or finger/heel stick. These are preferably taken after 8 pm given the night periodicity of microfilariae and stained with either Giemsa or H&E stain.[6]

PCR - for detecting antigen. Antigen detection is the preferred method of diagnosis since it also detects latent infections. However, assays for parasite antigen of W. bancrofti are currently not approved by the FDA.

Scrotal ultrasound - may reveal movements of adult worms in otherwise asymptomatic males. The "filarial dance sign" is a pattern of worm movement that can be detected in the lymphatic vessels of infected men.[10]

Diethylcarbamazine (DEC) has traditionally been recommended as potential monotherapy; however, it is to be avoided if there is coinfection with Loa loa or onychomycosis as it can worsen the progression of eye disease and can cause encephalopathy.[1][6] A single combined dose of ivermectin, albendazole, and DEC resulted in clearance of microfilaria in 96% of affected patients for up to 3 years and is currently recommended by the World Health Organization (WHO) as triple therapy in areas not endemic with Loa loa.[11] Doxycycline is preferred in areas co-endemic with Loa loa and has also shown the ability to slow the inflammation and fibrosis that leads to worsening lymphedema. Doxycycline also treats Wolbachia, a genus of symbiotic bacteria that inhabit nematodes.[1][12]

There is currently no vaccine for filariasis, but efforts are ongoing to develop one.[13]

Surgical treatments exist for the debulking of skin and creating lymphovenous anastomosis to improve drainage. Topical coumarin and flavonoids were shown to be effective in reducing lymphedema. It is thought that increased macrophage activity leads to the reuptake of proteinaceous material.[9]

A case report documented the success of ablative carbon dioxide laser treatment of skin lesions and lymphocutaneous fistulas, which resulted in significant improvement of skin lesions. It works via causing thermal damage to dermis resulting in remodeling of superficial tissue and dermal tightening. This was done in a patient with non-filarial elephantiasis but could have an application in filarial disease.[14]

Lymphedema can progress due to repeated attacks of adenolymphangitis even in the absence of LF. Strategies targeting lymphedema progression include working with patients on skin hygiene, wearing comfortable shoes, using compressive bandages, pneumatic compression, regular washing with soap and water, limb elevation, cold/heat therapy, and antibiotic and antifungal creams to prevent flares of lymphangitis.[9][15][6]

The Global Programme to Eliminate Lymphatic Filariasis is aiming to eradicate filariasis by 2020. They are currently monitoring, mapping, and mass distributing drugs to endemic areas. An update provided from this program in 2010 reports reaching the halfway point towards eliminating filariasis. As of 2015, a total of 6.2 billion treatments delivered to over 820 million people. According to WHO data as of 12/2019, the following countries have eliminated lymphatic filariasis as a public health problem: Egypt, Yemen, Thailand, Vietnam, Cambodia, Sri Lanka.

The prognosis is good if filariasis is recognized early and treated in a timely fashion to prevent deformity. The disease typically responds to 5 annual doses of DEC with or without ivermectin or albendazole. Symptoms don’t present until later into adulthood and correlate with increasing worm burden. Elephantiasis is the most severe form and is due to many years of acute on chronic superimposed infections. There is some ability to treat lymphedema, but it is difficult to manage once reaching advanced stages of the disease.

Occult filariasis - infection of other tissues without evidence in blood.[6] It can lead to:

Loiasis - co-endemic infection. It can cause severe drug interactions including encephalopathy if treated with ivermectin.[16]

Lymphatic filariasis is rare in the United States. DEC is no longer approved by the FDA, and providers will need CDC assistance with obtaining appropriate medications and also with the confirmation of infection. Patients with a coinfection of onchocerciasis with high levels of microfilaria should have a tropical medicine consultation.

Travelers are at little risk for developing lymphatic filariasis as it takes years of multiple exposures from infected mosquitoes to establish infection in humans, given lack of reproduction in mosquitoes.[1]

Lymphatic filariasis is a rare but disfiguring disease that can lead to marked morbidity if not considered. Several diagnostic and treatment recommendations are listed above. Physicians will have to work in tandem with nursing, administration, and public health officials in both confirming the diagnosis and successfully treating patients. Depending on the severity of disfigurement, they may require additional surgical consultation. The patient may need wound care and further education in hygiene and continued to follow up to prevent further attacks, which would lead to worse outcomes. 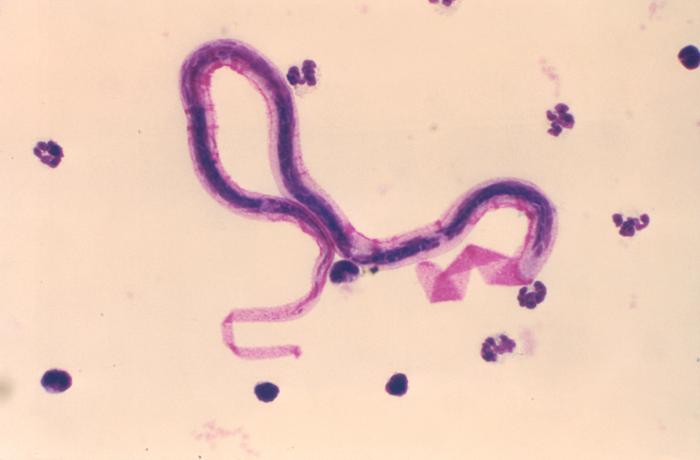 Shenoy RK, Clinical and pathological aspects of filarial lymphedema and its management. The Korean journal of parasitology. 2008 Sep;     [PubMed PMID: 18830049]