The fibroblast is one of the most abundant cell types present in the stroma. It has a variety of functions and composes the basic framework for tissues and organs. Under homeostasis, this cell is responsible for maintaining the extracellular matrix (ECM). During stress, fibroblasts adapt to their environment and have the ability to respond and send local signals. In times of injury, the fibroblast can transform phenotypes and synthesize the building blocks necessary to replace wounded tissue. During pathologic states, the extracellular matrix gets generated in excessive quantities, and collagen is deposited in a dysregulated manner often causing irreversible organ dysfunction or disfiguring appearance.

This article reviews the histology of the fibroblast cell. While this cell is present in multiple organ systems, the morphology of the cell remains the same.[1] Additionally, the article will examine the structure, function, tissue preparation, histochemistry, cytochemistry, electron microscopy, and relevant pathophysiology with clinical correlation.

Fibroblasts stem from a mesenchymal origin and have an elongated spindle or stellate shape with a multitude of cytoplasmic projections. Within the cytoplasm is an abundance of rough endoplasmic reticulum (rER) and a large Golgi apparatus. Myofibroblasts appear similarly to both fibroblasts and smooth muscle cells with additional distinguished features of nuclear membrane folds and long collections of microfilaments connecting to surrounding myofibroblasts and the extracellular matrix.[2]

Fibroblasts are the most common cell type represented in connective tissue. These cells produce a diverse group of products including collagen type I, III, and IV, proteoglycans, fibronectin, laminins, glycosaminoglycans, metalloproteinases, and even prostaglandins. In the adult body, fibroblasts remain in a quiescent form until stimuli activate protein synthesis and contractile mechanisms. These cells synthesize reorganize the ECM found in the skin, lung, heart, kidney, liver, eye, and other organs. The ECM is in constant communication with the surrounding cells as fibroblasts can secrete and respond to both autocrine and paracrine signals.[3][4] Matrix reorganization occurs through a process of degradation and crosslinking enzymes, produced by fibroblasts, that are activated and regulated by pro-inflammatory cytokines and growth factors. Transcription growth factor-alpha and beta (TGF-A and TGF-B), platelet-derived growth factor (PDGF), granulocyte-macrophage colony-stimulating factor (GM-CSF), epidermal growth factor (EGF), and tumor necrosis factor (TNF) all have implications in fibroblast regulation.[5]

Fibroblasts are a diverse group of cells.  Within one organ system, there can be a great variety of functions. Within the integument, dermal fibroblasts in different locations have separate roles. The superficially located lineage involves the formation of the hair follicle and is responsible for reepithelization during wound healing; the deeper lineage is responsible for ECM generation.[4] Fibroblasts are known for their plasticity; adipocytes, pericytes, endothelial and epithelial cells, otherwise known as terminally differentiated cells, can de-differentiate into fibroblasts.[6] Stimulation of fibroblasts further increases susceptibility to epigenetic modifications. The ability of fibroblasts to transform is partly due to the variety of cell-surface adhesion receptors (integrins, syndecans, cadherins) that facilitate the communication of fibroblasts with their surroundings. One of these well-described fibroblast transformations is the transformation of fibroblast into the myofibroblast.[7] Myofibroblasts are present in both healthy and pathologic tissues and contain features of fibroblasts and smooth muscle cells.[3] These cells work in conjunction with vascular endothelial cells to form granulation tissue during times of wound healing.

Proper specimens must be obtained to analyze fibroblasts microscopically.  The specific type of tissue is obtained by methods dependent on the organ and depth required for an accurate tissue sample. Excisional surgical specimens, punch biopsies, shave biopsies, and core biopsies are common approaches. Tissue specimens are delicate requiring preservation to allow for thin slices. The first preservation method can be through the utilization of a cryostat which rapidly freezes the tissues and slices frozen sections. The second method involves initially fixing or preserving the tissue in formalin to maintain it in a “life-like” state, processing the tissue (commonly through the addition of alcohol to dehydrate the specimen), embedding the specimen in paraffin wax, and lastly slicing sections (often with a microtome machine).

Immunohistochemical staining has had poor success in distinguishing fibroblasts as there are no fibroblast specific markers. The result is the staining of multiple cells that overlap in specificity. Immunofluorescence (IF) techniques can be deployed to compare fibroblasts and myofibroblasts. IF shows the expression of alpha-smooth muscle actin (SMA), a type of actin present in myofibroblasts but not found in fibroblasts. Identification of proteins exclusively found in smooth muscle cells, such as smoothelin, can also assist in distinguishing cell type.[2][8]

Fibroblasts are elongated, disc-like structures that are not readily visible upon standard light microscopy evaluation. Usually, only the nucleus is visible in proximity to collagen fibers. Fibroblasts possess long, thin, pale-staining processes that form the bulk of the cell's cytoplasm. These processes are visualized more readily during times of wound repair when rER is actively synthesizing new proteins for the ECM.[9]

Persistence of myofibroblasts within scar tissue contributes to hypertrophic scars, keloids, and fibromatoses (Dupuytren contracture). Myofibroblasts usually disappear via apoptosis during the second week of wound healing. The failure of myofibroblast apoptosis allows for excessive matrix synthesis and contraction of normal tissue. Hypertrophic scarring, keloids, and non-healing wounds represent a pathologic healing mechanism. Delayed apoptosis results in scar hypertrophy. Hypertrophic scars are elevated, do not grow past wound boundaries, and can slowly regress over time. Keloid scars have continued growth past wound edges and expand over time.[10] Fibroblasts within keloids are an atypical subtype that is increasingly proliferative and activates surrounding fibroblasts. Comparatively, chronic non-healing wounds contain fibroblasts that have stopped proliferating or have undergone premature apoptosis with abnormal cytokine signaling.[2]

Dupuytren contracture is a hand deformity that slowly forces fingers into a bent position. Due to an unknown etiology, proliferation of fibroblasts arranged in cords, nodules of myofibroblasts, and disordered collagen deposition causes disfiguration of the hand. Fibroblasts propagate this condition generating profibrotic cytokines in a prolonged manner subsequently leading to myofibroblast activation and continuous cytokine production. The pathophysiology of connective tissue contracture lies not only within the tension produced by myofibroblasts by also by the dynamic shortening of the ECM remodeling itself.[11][5][12]

Fibroblasts can regenerate functional tissue. They have involvement in all three stages of wound healing: inflammation, cell proliferation, ECM deposition, and remodeling. The process starts with an injury triggering an inflammatory response. Clot formation begins at the wound site formed from a fibrin-fibronectin matrix. Fibroblasts work off this scaffold to initiate the deposition and remodeling process.[6] Fibroblasts travel to the site of trauma after chemotactic stimulation. Fibroblast migration is a dynamic process involving ECM synthesis in the proximal direction and release of previously created distal structures. Collagenases produced by the fibroblast destroy neighboring interstitial matrix and assist in the migratory process. During migration, tractional forces are created in a parallel manner along anticipated lines of stress.[3]

Fibroblasts proliferate at the site of injury mediated by a slew of cytokines and growth factors. It is during this proliferative stage that granulation tissue forms and fibroblast activation takes place. The TGF-B above is one of the most well-researched cytokine mediators of fibroblast function. It functions as a chemotactic agent, a trigger for both proliferation and apoptosis, an enzyme activator, and a regulator of collagen deposition.[5] Present in low concentrations, TGF-B activates fibroblast cell proliferation; Conversely, it inhibits fibroblast mitogenesis when present in high quantities. TGF-B can come from platelets, white blood cells, parenchymal and epithelial cells, or from the fibroblast itself.[12] The fibroblast is necessary to synthesize the ECM scaffold to replace damaged tissue. The ECM is composed primarily of collagen, proteoglycans, and glycoproteins. In homeostasis, the primary collagen type produced by the fibroblast is organ dependent. Type I is predominant in the skin, I and III are prevalent in the interstitium of the lung, liver, and kidney, and IV collagen is abundant in the alveolar basement membrane.[1]

High tension within the wound produced by both migration and mechanical stress triggers adaptive changes in the ECM and the differentiation from fibroblast to myofibroblast, a step necessary for contraction and wound closure. The mechanical stress itself is enough to partially induce “stress fibers” within the fibroblast; however, additional factors are necessary for a full phenotype transition.  Fibroblasts containing the ectodysplasin A gene (a splice variant of fibronectin RNA) allow for TGF-B to stimulate the production of alpha-SMA. Increased alpha-SMA allows for the transition to myofibroblasts.[8][13] Additionally, the presence of matrix metalloproteinase-2 is sufficient to trigger myofibroblast differentiation. After being activated, myofibroblasts then deposit ECM elements forming granulation tissue.[3]

The migrational process of fibroblasts initiates tension production.  Myofibroblasts produce further contraction through the “fibronexus” adhesion complex allowing the myofibroblast to connect to intracellular microfilaments and the ECM mediated by alpha-SMA and non-muscle myosin. This activity permits the complex to contract in sync and perform wound closure. The fibronexus is not present in fibroblasts.[8][12] Research has shown that the proportion of myofibroblasts present in granulation tissue connects linearly to the rate of contraction. Fibroblasts can cause traction, but it is the myofibroblasts specifically that cause contraction. Wound contraction is also due in part to collagen shortening. The ECM of the granulation tissue is modified by metalloproteinases that degrade collagen, proteoglycans, and fibronectins.[3] Collagen type I and III are dominant in the granulation tissue, with type III predominating until remodeling occurs. Type I collagen is dominant in mature scars.[14]  Fibrogenesis continues until fibroblasts, and myofibroblasts get removed from the site through apoptosis. In normal processes, the wound healing cycle ends with the renewal of normal tissue structure and function. When fibroblast apoptosis occurs, prematurely non-healing or delayed healing can result. The prolonged inflammation delays apoptosis and continues ECM formation. High numbers of myofibroblasts in healed scar tissue is a pathologic sign.[3] 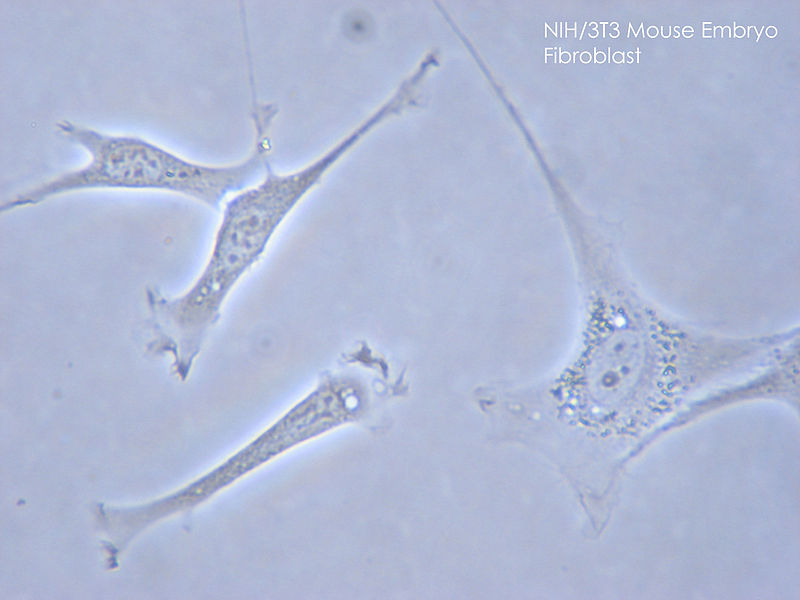