Acute febrile neutrophilic dermatosis, also known as Sweet syndrome, consists of erythematous plaques and papules along with constitutional symptoms such as fever and malaise. It is associated with several underlying diseases, including infections, malignancies, inflammatory bowel disease, autoimmune disorders, pregnancy, and drugs. This activity describes the evaluation and management of acute febrile neutrophilic dermatosis and highlights the role of the interprofessional team in improving care for patients with this condition.

Acute febrile neutrophilic dermatosis (AFND), also known as Sweet syndrome or Gomm Button disease, consists of erythematous plaques and papules along with constitutional symptoms such as fever and malaise. The average age of onset is 30 to 60 years and there is a female predominance. The disease is characterized histologically by a dense neutrophilic infiltrate. It is associated with several underlying diseases, including infections, malignancies, inflammatory bowel disease, autoimmune disorders, pregnancy, and drugs. Clinically the cutaneous lesions present as tender, edematous, erythematous plaques and papules, which may occasionally be bullous. The most effective treatment is prednisone. Other potential treatments include dapsone, colchicine, and potassium iodide.[1]

Etiologically, acute febrile neutrophilic dermatosis can be classical or idiopathic, malignancy-associated, or drug-induced. Each of these ultimately leads to either unsolicited neutrophil proliferation or persistence in the blood and tissue, which is responsible for the clinical manifestations of the disease.

Acute febrile neutrophilic dermatosis is uncommon, found worldwide, and has a 4:1 female to male predominance. The average age of onset is 30 to 60 years, but it can occur in infants and in the elderly. At least half of all patients have an identifiable underlying association. Internal malignancy is found in 15 to 30%, and hematologic malignancy is more common than solid organ cancer. 25% of patients have a preceding infection, and 10% have exposure to a potentially causative drug.[3]

The underlying pathophysiology of acute febrile neutrophilic dermatosis is unknown, but there are a few hypotheses. Dysregulation of cytokine secretion (including interleukin-1, granulocyte colony-stimulating factor, granulocyte-macrophage colony-stimulating factor, and interferon-gamma) resulting in dysfunction of neutrophil apoptosis is one hypothesis.[4] A defect in the transcriptional regulation of the hematopoietic protein tyrosine phosphatase non-receptor type 6 (PTPN6) has also been found to contribute to the pathogenesis of neutrophilic dermatoses.[5] Some patients have mutations detected in the gene associated with familial Mediterranean fever, MEFV.[6]

Alterations of proinflammatory cell signaling pathways and cytokine production in a genetically predisposed individual are considered central to the pathogenesis of AFND. Ultimately, these alterations affect neutrophil proliferation, migration, and destruction in the skin and other tissues. Tissue neutrophil levels are a function of infectious triggers for neutrophil proliferation and migration, bone marrow granulopoiesis, storage and release, trans-endothelial migration, and rate of neutrophil destruction. Abnormality in any of these steps could influence the development and progression of AFND.

Migration of neutrophils to the tissue in situations of cell stress is a normal immunological response, however, the loss of control over this process in AFND appears to be largely cytokine-mediated. Most commonly, IL-1, IL-3, IL-6, and IL-8 through nonspecific are found to be elevated in AFND. Moreover, elevated levels of G-CSF has also been noted in patients with AFND. G-CSF is produced by a variety of tissues, including endothelium and macrophages. Additionally, increased production of G-CSF is noted in multiple malignancies. Summarizing these facts, it may be hypothesized that abnormally increased production of G-CSF or increased sensitivity to normal levels of G-CSF could be a unifying mechanism of all the three variants of AFND.

The phenomenon of pathergy where-in a cutaneous lesion is triggered by minor trauma is demonstrated in AFND in common with other neutrophilic dermatoses. The probable mechanism could be a destruction of endothelial cells, cytokine dysregulation, and resultant neutrophil activation.

Genetic factors: Defects in the transcriptional regulation of the PTPN6 gene, mutations of the MEFV gene associated with the familial Mediterranean fever have been implicated in the pathogenesis of AFND.[1][7][8]

The histopathological features usually depend upon the type of lesion sampled

The clinical history should aim to delineate the specific subtype of AFND, which are the following:

History of fever, sore throat, or any other infection, significant weight loss, current or previous malignancy, or a new drug administration should be sought.

The classical clinical appearance is that of erythematous, tender, non-pruritic, papules, nodules, and plaques with predominantly head, neck, and upper trunk distribution patterns.

The plaques are often studded with multiple closely grouped translucent papules giving an illusion of vesiculation. These pseudo-vesicles and pseudo-pustules impart a mamillated appearance to the surface of the plaques and are considered one of the suggestive manifestations of AFND. Subsequent ulceration may occur, which resembles a superficial pyoderma gangrenosum that has been described in association with acute myeloid leukemia. Targetoid appearance, facial erysipelas like presentation, and giant cellulitis like appearance are the morphological variants.

Papulonodular lesions of lower limbs closely resemble erythema nodosum and can be differentiated histopathologically. Oral and genital involvements are usually uncommon. However, aphthous ulceration has been reported. Ocular involvement is relatively common in the form of episcleritis and conjunctivitis.

Systemic manifestations: The presence of fever and leukocytosis is the most common, followed by arthralgias and arthritis. Arthritis is typically asymmetric, non-erosive, and sterile.

In about 30% of cases, the skin lesions show spontaneous resolution by 3 months. However, fluctuating course with relapse and remission is more frequently observed.

As such, there are no specific diagnostic tests for acute febrile neutrophilic dermatosis. Su and Liu proposed the diagnostic criteria for Sweet syndrome, which are as follows:

Complete lymph node examination, examination of breasts and pelvic in female and prostate, and testicles in males, sigmoidoscopy, and positron emission tomography (PET) scan comprise the workup to rule out occult malignancy.

Although elevated levels of C-ANCA have been noted, it is no longer considered of any significance.[1][11]

For mild localized disease, potent, topical or intralesional corticosteroids may be effective. However, the majority of cases warrant the use of systemic corticosteroid therapy in the dose of 0.5mg to 1mg per kg of prednisolone equivalent for 4-6 weeks.

Treatment with low dose steroids may have to be continued for a longer time to prevent exacerbations. If remission is not achieved by 3 months, a second line steroid-sparing agent must be added.

A baseline G6PD activity should be done in patients before starting dapsone.

Miscellaneous drugs that have been reported to be efficacious in various studies include cyclophosphamide, cyclosporine, thalidomide, clofazimine, IVIG, and TNF-alpha antagonists.[1]

Reactive erythemas such as annular urticaria and erythema multiforme

The cutaneous lesions of acute febrile neutrophilic dermatosis or Sweet syndrome eventually show spontaneous resolution along with the associated extracutaneous manifestations. However, periodic exacerbations may occur, representing underlying paraneoplastic conditions. In a patient with a treated malignancy, recurrence of lesions of Sweet syndrome heralds a relapse. In the case of local cutaneous complications such as scarring and acquired cutis laxa, the prognosis is poor as they seldom respond to any modality.[14]

Even though lesions usually resolve with mild post-inflammatory hyperpigmentation, various localized complications such as scarring in the case of ulcerative lesions and atrophy in cases of panniculitis have been observed. Postinflammatory elastolysis presenting as acquired cutis laxa, also called Marshal syndrome, is a frequently encountered finding.[14]

In patients diagnosed with acute febrile neutrophilic dermatosis or Sweet syndrome, detailed counseling regarding the need to rule out underlying systemic diseases or malignancies should be carried out. Regular consultation with the dermatologist is recommended. In patients with treated malignancy, the reappearance of lesions should not be ignored as they can signal a relapse.[10]

Sweet syndrome is one of the great mimickers in dermatology. The key to diagnosing this syndrome is to have a high index of suspicion. Prompt referral to a dermatologist for tender erythematous papulonodular lesions with fever, which show an inadequate therapeutic response to analgesics and antibiotics, is necessary. More importantly, primary clinicians should obtain routine investigations such as a complete blood count, ESR, and CRP in suspected cases. Sweet syndrome heralds underlying infectious, immunological, or malignant disease hence, prompt diagnosis and a thorough evaluation by an interprofessional team are necessary for ruling out underlying systemic illnesses.[1][10] [Level 5] 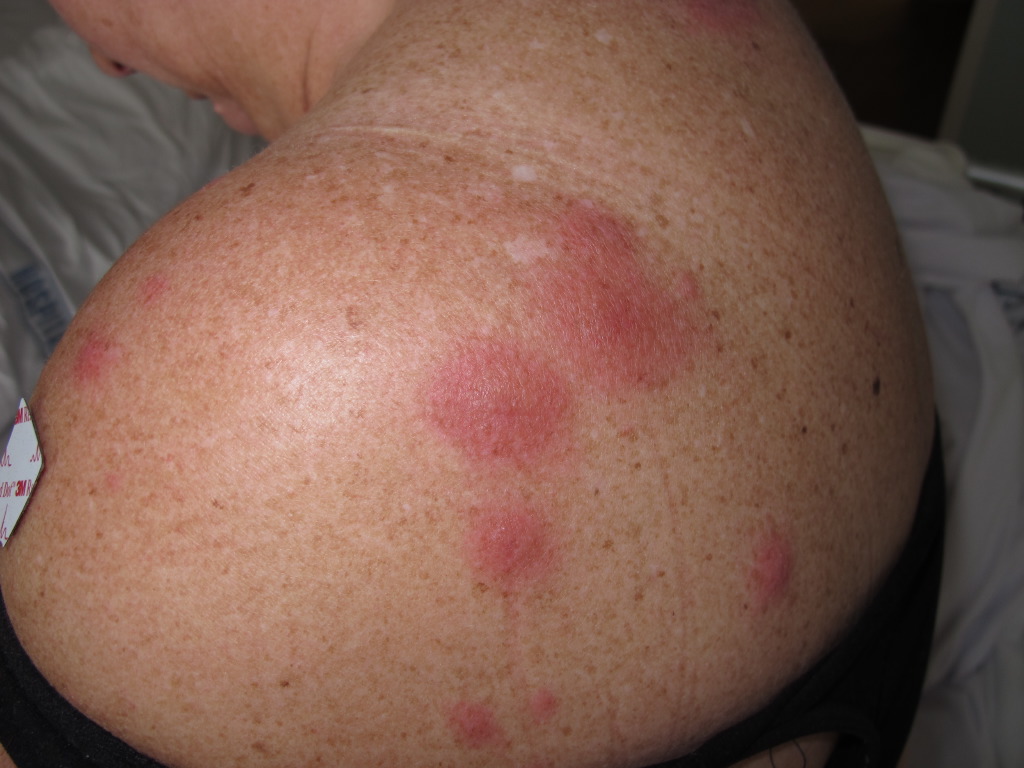