Erb palsy, or Erb-Duchenne paralysis, is one of the most common neurological birth injuries. It is caused by injury to the brachial plexus, which is formed from the ventral rami of cervical nerves 5-8 and thoracic nerve 1. The brachial plexus innervates all muscles of the upper limb except the trapezius. Erb palsy occurs when the upper trunk of the brachial plexus, comprising cervical nerves 5 and 6 are severed. This activity reviews the evaluation and management of Erb palsy and highlights the role of the interprofessional team in caring for patients with this condition.

Erb palsy, or Erb-Duchenne paralysis, is a paralysis of the arm caused by the injury to the upper group of the main nerves supplying it, specifically the upper trunk C5-C6 of the brachial plexus.  It is one of the most common neurological birth injuries, and these injuries most commonly, though not exclusively, arise from the traction on the neck during a difficult childbirth. According to the severity of the injury, it can either resolve on its own over some time or may require rehabilitative therapy and surgery.[1]

It is often assumed that the cause is the obstetrical technique during delivery, but two major risk factors include shoulder dystocia and the large size of the fetus. Most cases resolve with time, but a few infants may need surgery. Permanent disability is rare.

Erb palsy relates to an injury of cervical spinal nerves C5 and C6. C5-C6 nerves form part of brachial plexus, comprised of ventral rami of cervical spinal nerves C5-C8 and thoracic nerve T1. These nerves network from the spine and pass through the cervicoaxillary canal in the neck and the ribs and emerge into the axilla. Most commonly, the brachial plexus is injured by traction of the neck during delivery. The most important risk factors are macrosomia and shoulder dystocia. It usually occurs in macrosomic infants who needed to be pulled from the birth canal. This maneuver causes stretching of the brachial plexus, which may injure it.  However, brachial plexus injury can also result independently of shoulder dystocia and average weighing neonates.[2] Other risk factors that lead to brachial plexus injury include breech delivery, an ultrashort second stage of labor, multipara mother, maternal obesity, maternal diabetes, or vacuum and forceps delivery. Erb palsy may also occur following a cesarean section.[3][4][5][6]

The ventral rami of the cervical spinal nerves C5 and C6 join to form the upper trunk of the brachial plexus. Each trunk is divided into anterior and posterior divisions, which are further divided to create the cords, then branches, namely axillary nerve, suprascapular nerve, and musculocutaneous nerve, to supply the muscle of the upper limb. Injuries to the brachial plexus range from mild to severe. The degree of severity can be defined as neuropraxic, axonometric, or neurometric. A neuropraxic injury is the least severe. It is reversible and heals without any complication. Axonometric lesions involve disruption of axon and myelin sheath. Recovery of axonometric lesions depends on the level of lesion, and it may take months to heal with proper treatment, including physiotherapy. Neurometric has the worst prognosis, with avulsion of the roots from the spinal cord causes irreversible damage affecting the axon, myelin sheath, and supporting structures through the nerve. The proximal end of the nerve tries to regenerate by forming a neuroma.[2]

Erb palsy most commonly presents with a history of birth injury. The signs of Erb's palsy include loss of sensation in the arm and paralysis and atrophy of the deltoid, biceps, and brachialis muscles. The muscular damage results in the classical sign of Erb’s palsy called the ‘waiter’s tip hand.’ The neonate presents with the arm hanging limply from the shoulder with adduction at the shoulder, internal rotation of the upper arm, pronation of the forearm, an outward direction of the palm, giving the appearance of "waiter's tip posture.". The arm cannot be raised from the side, and all power of flexion of the elbow is lost due to the paralysis of the biceps muscle. Moro reflex is absent on the affected side. Meanwhile, the grasp reflex is present, which differentiates it from another brachial nerve palsy, Klumpke palsy (C7, C8, and T1). The neonate may have impaired sensation on the outer side of the arm and/or phrenic nerve palsy (C3, C4, and C5a), resulting in hemidiaphragm paralysis.[2]

In some cases, there may be sensory loss over the lateral aspect of the upper arm. When C3 and C4 are damaged, one may also note paralysis of the diaphragm. Horner syndrome may occur when the stellate ganglion is damaged.

Erb palsy is a disorder of clinical diagnosis, but some interventions can confirm it. MRI of the brachial plexus and cervical cord is likely the best imaging technique if required. An MRI can also exclude any cancer or tumor that may affect the brachial plexus. An X-ray of the baby's shoulder excludes any fractured bone or problems with the shoulder or elbow joints. Electromyography (EMG) results can estimate and record the electrical activity of the muscle with absent fibrillations likely indicate neuropraxia. Nerve conduction studies (NCS) can measure the time required for the electrical stimulus to move through a particular nerve.  CT myelography works by injecting the contrast material to give detail of the neonate spinal cord and nerve root.[7][2]

The management of Erb's palsy depends upon its severity, with some cases requiring surgical intervention while others can be managed by physiotherapy alone. Recommended treatment includes early immobilization followed by passive and active range of motion exercises. Different treatment modalities suggested for Erb Palsy are:

1-Hydrotherapy: It is a form of physical therapy used because of the anti-gravity environment. It minimizes the stress on the musculoskeletal frame, allowing the neonate to move with less pain and at the same time strengthening muscles and reducing spasms. Paralyzed muscles relax in the opposite position of the waiter's tip posture by abduction at the shoulder, external rotation of the arm, and supination of the forearm. In addition, hydrotherapy helps encourage normal movements in the affected arm.

2-Physiotherapy: Physiotherapy is either done alone or in combination with hydrotherapy. Response to the therapy varies from patient to patient, with some healing earlier than others. Physical therapy can be required for severe cases to accompany surgery or in case of mild condition to work them through strengthening the area and healing on their own. Various forms of physical therapy exercises may include gentle stretching exercises, sensory stimulation, range of motion exercises, and strength exercises.

Erb palsy should be differentiated from other injuries such as Klumpke injury, clavicular fracture, cervical ribs, osteomyelitis of the humerus or clavicle, and septic arthritis of the shoulder.

-In the case of Klumpke injury, there is paralysis of the forearm and hand muscle due to injury in C7, C8, and T1.  The neonate presents with a "claw hand" due to injury to the flexor muscles of the wrist, fingers, and forearm pronator. It also affects the intrinsic muscles. The neonate injury also may be associated with Horner syndrome due to the affection of T1, which will affect the dilators of the iris and elevators of the eyelid.

-A clavicular fracture can cause pseudoparalysis, which can be mistaken for Brachial plexus injury.

-Osteomyelitis of the humerus or clavicle and septic arthritis of the shoulder can occasionally lead to a BPI, most likely due to thrombophlebitis of the vasa vasorum or an arterial embolism causing ischemic nerve damage.

Erb palsy generally has a favorable prognosis and can be completely resolved in the first year of life if recovery begins with four weeks. However, if the muscle remains denervated then without reinnervation, the injury becomes irreversible at 18 to 24 months. These time-sensitive, irreversible changes are the scientific basis for early management recommendations.[10]

Neglected cases may lead to a 20% to 30% permanent deficit of the nerve function. A persistent Erb palsy may also affect the child’s quality of life and self-esteem. Many long term complications of Erb's palsy due to impaired innervation are: 1) decreased strength and stamina, 2) abnormal movement and function of joints, 3) muscular atrophy, 4) impaired bone growth, 5) osteoarthritis, 6) limb length discrepancy, 7)impaired balance, and coordination.

Several paradigms may bring disadvantage to the neonate, including “all neonatal brachial plexus palsy recovers,” “wait a year to see if recovery occurs," and "do not move the  arm." These approaches by far lead to a 20% to 30% deficit of total function of the nerves affected. Thus early recognition and interference are necessary, beginning with proper diagnosis and including rehabilitation and, in certain cases, surgical intervention.

Erb palsy requires early diagnosis and management for the best outcomes. Prenatal counseling of diabetic mothers to have good glycemic control is important to reduce the risk of Erb palsy due to macrosomia and shoulder dystocia. Parents of the affected children should be counseled about the importance of physiotherapy at an early age for the functional recovery of the arm as well as surgical repair in case of sustained injury.

About 10% of infants with neonatal brachial plexus palsy fail to gain functional recovery. Intervention for this group is needed and includes the resection of neuroma-in-continuity (NIC) and surgical nerve reconstruction to solve the problem. Formation of NIC inhibits functional recovery of neonatal brachial plexus palsy. A series of NIC tissue samples are obtained and analyzed using an array of immunohistochemical techniques. It is discovered that NIC contained multiple focal globular areas with markedly diminished myelination. This focal area, focal myelin deficits (FMDs), includes Schwann cells that wrap axons in normal configuration but do not form the myelin sheath. Axon segments in FMDs also had disturbed nodes of Ranvier. The axon in FMDs may be a pathobiological basis for explaining conduction blocks in neonatal brachial plexus, leading to functional recovery failure. Otherwise, this mechanism needs further studies.

Erb palsy requires early diagnosis and management for the best outcomes. Prenatal counseling of diabetic mothers to have good glycemic control is important to reduce the risk of Erb's palsy due to macrosomia and shoulder dystocia. In addition, parents of the affected children should be counseled about the importance of physiotherapy at an early age for the functional recovery of the arm as well as surgical repair in case of sustained injury.

A mental health nurse consult is highly recommended as the disorder can have a major psychosocial impact on the child. The child may not be able to use the arm, take part in sports or perform daily living activities. Often children become depressed and withdrawn. Because recovery is slow, long-term monitoring as outpatients is necessary. Once the diagnosis of Erb palsy is made, the interprofessional team should determine the care plan and ensure that the child is closely monitored. Failure to treat the condition can lead to severe disability.

About 90% of infants with Erb palsy will show recovery with time, but 10% will continue to have a dysfunctional arm. The key is to prevent this injury in the first place.[2] 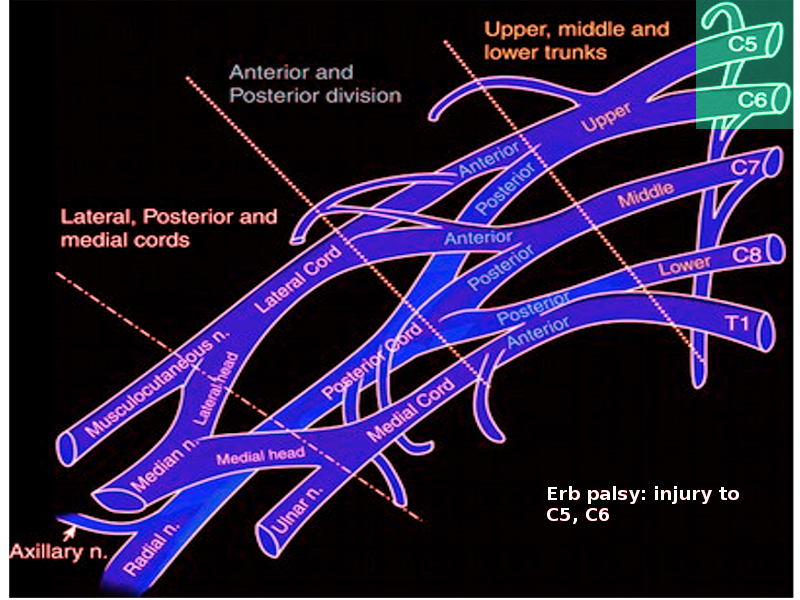 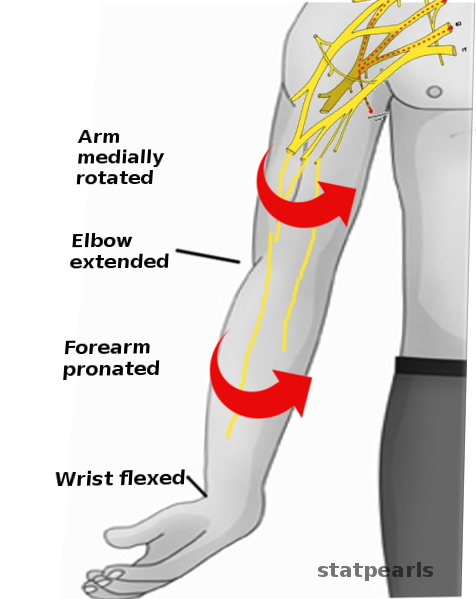