An epidural hematoma (EDH) is an extra-axial collection of blood within the potential space between the outer layer of the dura mater and the inner table of the skull. It is confined by the lateral sutures (especially the coronal sutures) where the dura inserts. It is a life-threatening condition, which may require immediate intervention and can be associated with significant morbidity and mortality if left untreated. Rapid diagnosis and evacuation are important for a good outcome. This activity examines when this condition should be considered on differential diagnosis and how to properly evaluate it. This activity highlights the role of the interprofessional team in caring for patients with this condition.

An epidural hematoma (EDH) is an extra-axial collection of blood within the potential space between the outer layer of the dura mater and the inner table of the skull. It is confined by the lateral sutures (especially the coronal sutures) where the dura inserts. It is a life-threatening condition, which may require immediate intervention and can be associated with significant morbidity and mortality if left untreated. Rapid diagnosis and evacuation are important for a good outcome.[1][2][3]

It occurs in approximately 10% of traumatic brain injuries (TBI) requiring hospitalization. Both traumatic and non-traumatic mechanisms can cause an epidural hematoma.[4][5]

The majority of cases related to a traumatic mechanism are a result of head injury due to motor vehicle collisions, physical assaults, or accidental falls.

Non-traumatic mechanisms include the following:

An epidural hematoma occurs in 2% of all head injuries and up to 15% of all fatal head traumas. Males are more often affected than are females. Furthermore, the incidence is higher among adolescents and young adults. The mean age of affected patients is 20 to 30 years, and it is rare after 50 to 60 years of age. As an individual's age advances, the dura mater becomes more adherent to the overlying bone. This decreases the chance that a hematoma can develop in the space between the cranium and dura.[6]

Most epidural hematomas result from arterial bleeding from a branch of the middle meningeal artery. The anterior meningeal artery or dural arteriovenous (AV) fistula at the vertex may be involved.[7][8]

Up to 10% of EDHs are due to venous bleeding following the laceration of a dural venous sinus.

In adults, up to 75% of EDHs occur in the temporal region. However, in children, they occur with similar frequency in the temporal, occipital, frontal, and posterior fossa regions.

A skull fracture is present in the majority of patients with EDH. These hematomas often present beneath a fracture of the squamous part of the temporal bone.

If this condition occurs within the spine, this entity is described as a spinal epidural hematoma.

Based on radiographic progression, it can be classified into one of the following

The typical presentation is an initial loss of consciousness following trauma, a complete transient recovery (“often termed as a lucid interval”), culminating in a rapid progression of neurological deterioration. This occurs in 14% to 21% of patients with an EDH.  However, these patients may be unconscious from the beginning or may regain consciousness after a brief coma or may have no loss of consciousness. Therefore, the presentations range from a temporary loss of consciousness to a coma. Beware that the lucid interval is not pathognomonic for an EDH and may occur in patients who sustain other expanding mass lesions. The classic lucid interval occurs in pure EDHs that are very large and demonstrate a CT scan finding of active bleeding. The presentation of symptoms depends on how quickly the EDH is developing within the cranial vault. A patient with a small EDH may be asymptomatic, but this is rare. Also, an EDH may also develop in a delayed fashion.

A posterior fossa EDH is a rare event. This kind of EDH may account for approximately 5% of all posttraumatic intracranial mass lesions. Patients with posterior fossa EDH may remain conscious until late in the evolution of the hematoma, when they may suddenly lose consciousness, become apneic, and die. These lesions often extend into the supratentorial compartment by stripping the dura over the transverse sinus, resulting in a significant amount of intracranial bleeding.

This enlarging hematoma leads to eventual elevation of intracranial pressure which may be detected in a clinical setting by observing ipsilateral pupil dilation (secondary to uncal herniation and oculomotor nerve compression), the presence of elevated blood pressure, slowed heart rate, and irregular breathing. This triad is known as the “Cushing reflex.” These findings may indicate the need for immediate intracranial intervention to prevent central nervous system (CNS) depression and death.

CT scan is the most common imaging modality to assess for intracranial bleeding. Its popularity is related to its widespread availability in emergency departments. The majority of EDHs are identifiable on a CT scan. The classic presentation is a biconvex or lens-shaped mass on brain CT scan, due to the limited ability of blood to expand within the fixed attachment of the dura to the cranial sutures. EDHs does not cross suture lines.

Generally, radiologists use a standard formula for estimating the amount of blood present in an EDH.  It is as follows:

A: The maximum hemorrhage diameter on the CT slice with the largest area of hemorrhage

B: The maximum diameter 90 degrees to A on the same CT slice

C: The number of CT slices with hemorrhage multiplied by the slice thickness in centimeters

There are, however, other CT findings that may need to be taken into account when evaluating EDH. For example, continued bleeding may be indicated by areas of low density, or a "swirl-sign." The latter may be used for prognosis, and often indicates the need for surgical intervention. If the EDH abuts brain tissue that is hemorrhagic or contused, it may appear shallow, and thus, may be overlooked if the CT scan is not carefully examined.

Several factors may lead to a non-diagnostic CT scan. These are as follows:

Brain MRI is more sensitive than a CT scan, particularly when assessing for EDH in the vertex. It should be obtained when there is high clinical suspicion for EDH, accompanying a negative initial head CT scan.

In the situation of a suspected spinal EDH, a spinal MRI is the preferred imaging modality, as it affords higher resolution versus a spinal CT.

When evaluating EDHs located in the vertex, the healthcare professional should evaluate for the presence of a dural arteriovenous (AV) fistula that may have arisen from the middle meningeal artery. Angiography may be required to evaluate the presence of such a lesion fully.

EDH is a neurosurgical emergency. It, therefore, requires urgent surgical evacuation to prevent irreversible neurological injury and death secondary to hematoma expansion and herniation. Neurosurgical consultation should be urgently obtained as it is important to intervene within 1 to 2 hours of presentation.[10][11][12]

The priority is to stabilize the patient, including the ABCs (airway, breathing, circulation), and these should be addressed urgently.

Surgical intervention is recommended in patients with:

In patients with acute and symptomatic EDHs, the treatment is craniotomy and hematoma evacuation. Based on the available literature, “trephination” (or burr hole evacuation) is often a crucial form of intervention if more advanced surgical expertise is unavailable; it may even decrease mortality. However, the performance of a craniotomy, if feasible, can provide a more thorough evacuation of the hematoma.

There is a scarcity of literature comparing conservative management with surgical intervention in patients with EDH. However, a non-surgical approach may be considered in a patient with acute EDH who has mild symptoms and meets all of the criteria listed below:

If the decision is made to manage acute EDH non-surgically, close observation with repeated neurological examinations and continuous surveillance with brain imaging is required, as the risk for hematoma expansion and clinical deterioration is present. The recommendation is to obtain a follow-up head CT scan within 6 to 8 hours following brain injury.

In general, patients with pure EDHs have an excellent prognosis of a functional outcome after the surgical evacuation, when it is rapidly detected and evacuated. A delay in diagnosis and treatment increases morbidity and mortality.

EDHs caused by arterial bleeding develop rapidly and can be detected quickly. But those due to a dural sinus tear develop more slowly. Thus, clinical manifestations may be delayed, with a resultant delay in recognition and evacuation. Generally, an EDH volume greater than 50 cm prior to evacuation results in a worse neurological outcome and consequent mortality.

Factors that may influence the outcome are as follows:

Several markers that correlate with a poor prognosis of EDH include the following:

Certain head CT findings can correlate with a poor prognosis:

Following services should be immediately consulted as the outcome is time-dependent:

EDH is a relatively common presentation to the emergency department, and if not diagnosed is associated with high mortality. The condition is best managed by an interprofessional team that includes the emergency room physician, the trauma team, radiologist, neurologist, neurosurgeon, intensivist and the ICU nurses. The condition has been associated with mortality rates in excess of 15%. The key prognostic feature is the level of consciousness at the time of presentation. Both bilateral epidural hematomas and posterior fossa epidural hematomas carry a very high mortality. The key to treating this condition is preventing it in the first place. Healthcare workers should educate the public on the importance of head safety equipment when playing sports or while working.[13][14] 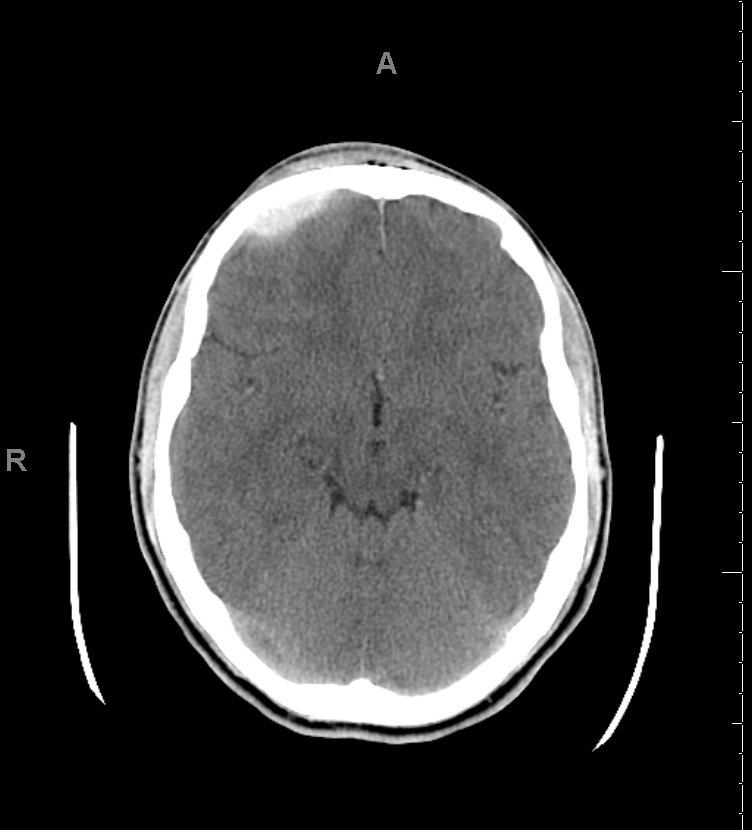 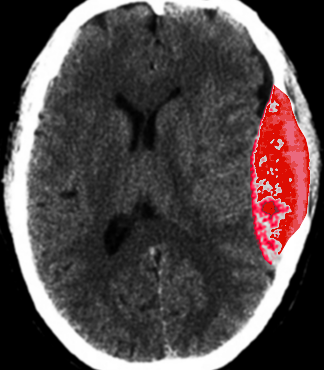 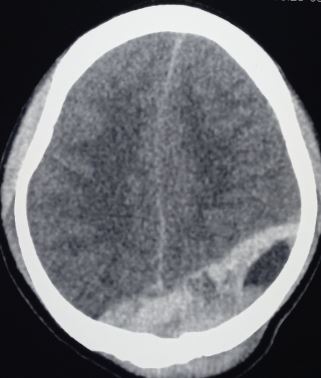