During fetal development, the ductus arteriosus serves as a shunt between the pulmonary artery and the aorta. In the fetus, the blood is oxygenated in the placenta before being returned to the body. The lungs are filled with amniotic fluid and therefore cannot be used to oxygenate the blood. Instead, the arterioles in the lungs constrict, which restricts the amount of blood flow that can pass through. Since the blood is already oxygenated after leaving the placenta and entering the body, the ductus arteriosus allows for it to bypass the pulmonary circulation and enter directly into the systemic circulation. The ductus arteriosus is maintained in its open conformation by being exposed to the E series prostaglandins which are in relatively high concentrations before birth. These prostaglandins are produced by the ductus and by the placenta.

Shortly after birth and the first breath, the lungs are filled with oxygen, and the pulmonary arterioles dilate. This change in pulmonary-arteriole resistance allows for a significant increase in pulmonary blood flow. At the around the same time, the placenta is removed from the circulation, and therefore prostaglandin levels drop. The ductus arteriosus responds to these changes by closing and becoming the ligamentum arteriosum. This prevents oxygenated blood from returning to the pulmonary circulation and after passing through the lungs and into the aorta. This closure of the ductus occurs in most individuals within the first 3 months of life. However, there are times when this closure fails to occur. This condition is called patent ductus arteriosus and is discussed in further detail below. In addition, a patent ductus arteriosus can be medically induced in certain situations by administration of prostaglandin E2.

The ductus arteriosus derives from the 6th aortic arch. During embryonic development, this connection forms between the first portion of the pulmonary artery and the isthmus of the aorta. This provides a path through which fetal blood can be shunted away from the pulmonary circuit and delivered directly into the systemic circulation.[4]

The ductus arteriosus can be of surgical importance when treating certain congenital heart defects. One such example is when a child is born with a transposition of the great arteries. In this condition, the ascending aorta and the pulmonary trunk are switched in location. This leads to an inability for oxygenated blood to leave the pulmonary circulation and enter the systemic circulation. If left untreated, this condition is incompatible with life. [5] In these situations, an arterial switch is the only definitive treatment.[6] In these situations, prostaglandin E2 is often administered prophylactically to maintain the patency of the ductus arteriosus until a surgical correction can be made. This allows for blood to mix between the two distinct circulatory circuits.

Another important surgical consideration is in cases where a patent ductus arteriosus is resistant to medical treatment. In these cases, the ductus arteriosus can be closed manually in surgery. There are two different approaches used to accomplish this. One is a more traditional surgical approach which requires the surgeon to open the thoracic cavity and ligate the vessel directly. The other is much less invasive and is done percutaneously. This version of the procedure involves the intravenous delivery of an occlusion device that, from within, plugs up the shunt.[7][8]

Patent ductus arteriosus (PDA) is a condition in which the ductus arteriosus fails to close after birth. A PDA is one of the most common cardiac defects associated with congenital rubella syndrome and may severely impact an infant's quality of life.[9] The PDA leads to the generation of a left-to-right shunt since the blood pressures in the aorta are much higher than in the pulmonary artery. If allowed to remain patent, the pressure inside the pulmonary circuit will rise, leading to pulmonary hypertension. Failure to adequately address this pulmonary hypertension may lead to cyanosis and shunt reversal (Eisenmenger syndrome). Late complications of Eisenmenger syndrome include arrhythmias and sudden cardiac death. The development of this syndrome indicates irreversible changes to cardiac and pulmonary vasculature and lung/cardiac transplants are the only viable treatment option. [10]

During fetal developments, prostaglandins (E1 and E2) are responsible for maintaining the patency of the ductus arteriosus. Prostaglandin E2 has the strongest effect and is produced both by the placenta and the ductus arteriosus itself. [11] A patent ductus arteriosus can also be induced by the direct administration of prostaglandin E2. This is often done to maintain circulation in children who are born with life-threatening congenital heart defects. One such example is when a child is born with transposition of the great vessels (the aorta and pulmonary trunk are switched in location). Ordinarily, this condition would exclude oxygenated blood from entering the systemic circulation. However, a patent ductus arteriosus allows for oxygenated blood to cross over and buys the surgeon's time to prepare for surgery.

Patent ductus arteriosus is often treated medically with non-steroidal anti-inflammatory drugs (NSAIDs) such as Indomethacin.[12] These medications work by inhibiting the synthesis of prostaglandins and therefore, decreasing their concentration in the blood. Studies have shown that premature infants born to Non-Caucasian mothers are more responsive to indomethacin treatment for patent DA than Caucasian infants. It has been suggested that this may be associated with expression of genes involved with the production of nitric oxide. [4] In refractory cases, however, surgery can be done to manually close the shunt.

It should also be noted that NSAIDs taken during pregnancy can increase the risk of early closure of the ductus arteriosus. For this reason, it is often advised that pregnant mothers avoid these medications after 30 weeks of gestation.

An aortic transection is a condition where the aorta is torn or ruptured due to some trauma. This condition is most often fatal shortly after it’s onset since the aorta is the largest vessel in the body and it supplies blood directly from the heart to the rest of the vessels. The most frequent site of aortic transection is at the location where the ligamentum arteriosum (the remnant of the ductus arteriosus) attaches to the aorta. The ligamentum arteriosum acts as a tether that holds the aorta and pulmonary artery close to each other. When the body experiences a rapid deceleration (such as in a car crash), a large shearing force is applied to these great vessels due to the rigidity of this tether. This sheering force is responsible for the subsequent rupture of the aorta.[13] 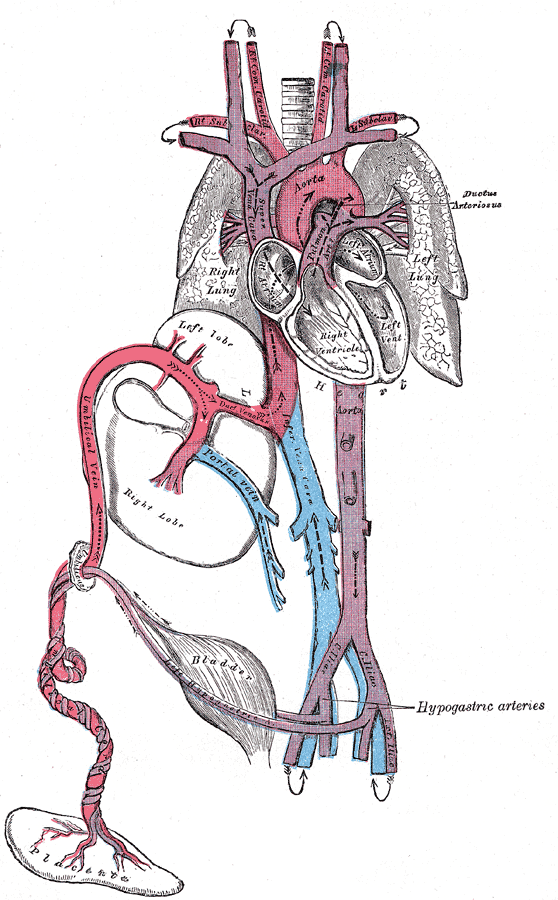