The dorsal scapular nerve (DSN) is a motor nerve arising from the ventral ramus of the C5 nerve root.  Once branching from the brachial plexus, the DSN pierces the middle scalene muscle, coursing deep to levator scapulae and the rhomboid muscles.  DSN entrapment is a known, yet relatively uncommon, the cause of neck and/or shoulder pain.[1][2][3]

The DSN is a motor nerve that innervates the levator scapulae, rhomboid major, and rhomboid minor muscles. These muscles work dynamically and collectively are considered periscapular stabilizing muscles.  Individually they can retract and elevate the scapula. The DSN does not possess any sensory fibers, although cadaveric and anatomical studies have reported variable contributions to the DSN from any or all combination of C4 to T1 nerve roots.

Variations in DSN motor function have included an absence of levator scapulae innervation and a rare innervation of the serratus posterior superior muscle.[4][5][6][7]

The dorsal scapular artery (DSA) follows the DSN to provide blood to the trapezius, levator scapulae, and rhomboid muscles. The DSA commonly spirals around the DSN as it runs medial to the scapula and anterior to the rhomboid muscles. There is some variability for the origin of the DSA. A direct dorsal scapular artery from the subclavian artery is the most common origin (75%) followed by an indirect dorsal scapular artery branch from the thyrocervical trunk (25%). The course of the artery also varies as it passes between the trunks of the brachial plexus. A direct branch is most likely to pass between the upper and middle trunks of the brachial plexus while an indirect branch is most likely to pass above the upper trunk.

As the DSN is formed by the anterior rami of C5, it passes posteriorly going through the substance of the middle scalene muscle in a slight posteroinferiorly path. Emerging from the middle scalene, it passes posteriorly between the posterior scalene, levator scapulae, and the serratus posterior superior muscle. From this location, the DSN passes inferior and medial to the scapula, coursing anterior to the rhomboid minor and major. From this position, the DSN terminates by innervating the rhomboid major and minor on their anterior surfaces.[8]

The levator scapulae muscle starts from the transverse processes of C1-C4 and inserts into the superior angle of the scapula. The action of this muscle on the scapula is an upward medial pull while aiding slightly in a downward rotation. The levator scapulae can also aid in drawing the cervical spine towards the same side shoulder.

An interscalene brachial plexus block is a commonly used anesthesia procedure for regional surgery involving the lateral clavicle, shoulder joint, and proximal humerus. The block may be performed in an anterior or posterior approach. The risk of an anterior approach includes an iatrogenic phrenic nerve block. Impacting the phrenic nerve could have significant consequences for the patient with pulmonary compromise.  Thus, patients with a history of severe COPD are often provided an alternative anesthetic modality.

The posterior approach minimizes this risk especially with the use of ultrasound guidance. In studies of the ultrasound-guided procedure, the dorsal scapular nerve is encountered in the vast majority of cases (75%). In addition to the dorsal scapular nerve, the long thoracic nerve is frequently affected as well (21%). Both nerves being impacted simultaneously occurs as well (24%).

The most common source of DSN entrapment is a hypertrophied middle scalene muscle.  DSN compression/entrapment neuropathy can present with a spectrum of clinical conditions:

Having a stable scapula aids the entire upper extremity by being a solid base to pull against during functional activities such as raising the arm overhead. Normal functioning rhomboid muscles play a significant role in the securing the scapula. Several studies have found that a weakened rhomboid frequently results in slight scapular winging and inability to firmly hold the scapula. A common source of rhomboid paralysis comes as a result of dorsal scapular nerve entrapment. A lesion of the dorsal scapular nerve has most frequently been localized to an entrapment associated within the middle scalene muscle. A myofascial scapular pain syndrome is a frequent finding in the patient with dorsal scapular nerve pathology. These cases are frequently incorrectly diagnosed and present with pain on the medial border of the scapula and the possibility of radiating pain to the lateral arm and forearm. The lack of a sensory distribution associated with the dorsal scapular nerve contributes to the difficulty in associating the interscapular pain with this motor nerve. 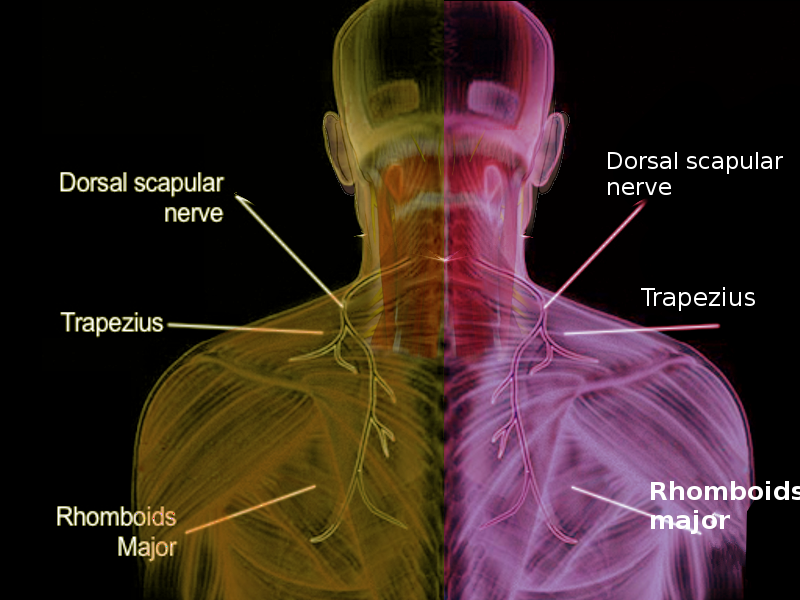