Diffusing Capacity Of The Lungs For Carbon Monoxide

Pulmonary function tests are performed to assess lung function. Spirometry is the most common and widely used lung function test, followed by diffusing capacity of the lungs for carbon monoxide (DLCO). It is also known as the transfer factor.[1] DLCO is a measurement to assess the lungs' ability to transfer gas from inspired air to the bloodstream.[2] Carbon monoxide (CO) has a high affinity for hemoglobin, and it follows the same pathway as that of oxygen to finally bind with hemoglobin. Inhaled CO is used for this test due to its high affinity for hemoglobin (200 to 250 times that of oxygen). Among other potential gases for evaluating diffusing capacity, oxygen is not preferred since its uptake is limited by cardiac uptake and total body consumption.

In brief, during a ten-second breath-hold, DLCO measures uptake of CO per unit time per mm of driving pressure of CO (cc of CO/sec/mm of Hg).

The respiratory membrane forms the diffusing barrier. It separates air within the alveoli from blood flowing in the pulmonary capillaries. It consists of the following layers:

According to Fick's equation for the diffusion of gas[3]:

As a consequence, the diffusion of gas across the alveolar membrane increases with:

On the other hand, the diffusion of gas across the alveolar membrane decreases with:

In the single breath method, the patients are initially asked to take normal resting breaths initially; this is followed by full exhalation up to residual volume (RV). The patient is then asked to rapidly inhale the test gas up to vital capacity (VC). The test gas contains:

The patient is then asked to hold his breath for 10 seconds at total lung capacity (TLC). Subsequently, the patient exhales out completely, and exhaled gas is collected for analysis after excluding the initial amount of gas from dead space. The collected gas is analyzed for CO and tracer concentrations. Total lung volume, initial and final CO concentration, and breath-holding time are used to calculate DLCO. The recommended timing method used is the Jones and Meade method, which measures breath holding time at thirty percent of inspiratory time up to half of the sampling time. Usually, an average of two or more attempts is considered for DLCO calculation in the single breath-holding technique.

The rebreathing technique is less frequently used, usually during exercise studies. However, a study carried out by Liu et al. showed the rebreathing technique to be more consistent with respiratory system physiology and could be a better test in measuring diffusing capacity than the intrabreath method.[5] Another study conducted by Suzuki et al. showed that the intrabreath method is a reliable alternative to the single breath method to measure diffusion capacity.[6]

DLCO is indicated in the evaluation of parenchymal and non-parenchymal lung diseases in conjunction with spirometry. The severity of obstructive and restrictive lung diseases, pulmonary vascular disease, and preoperative risk can be assessed using DLCO.[7]

Severity and classification of DLCO reduction[8]:

Measurements of pulmonary diffusing capacity are contraindicated in cases of chest and abdominal pain, oral or facial pain, dementia, or stress incontinence.[9]

Low DLCO and Low KCO: seen in COPD with emphysema due to alveolar destruction (usually normal in chronic bronchitis) with an obstructive pattern on PFT.

Smoking can also cause a decrease in DLCO.[11]

DLCO and KCo are also reduced in interstitial lung diseases, pulmonary fibrosis due to the thickening of the alveolar-capillary membrane with a restrictive pattern on PFT.[7]

A normal DLCO with a restrictive pattern on PFT suggests neuromuscular or chest wall disorder.

In dyspnea cases of unknown etiology, the pattern of normal spirometry with low DLCO increases the likelihood of pulmonary vascular disease. However, this pattern may also present in other disorders, e.g., mild ILD.[1]

High DLCO is seen in conditions like obesity, asthma, which are characterized by large lung volumes.[12] KCo may be raised in conditions involving profuse pulmonary hemorrhage (e.g., Goodpasture syndrome, systemic lupus erythematosus, granulomatosis with polyangiitis). This is due to the uptake of CO by free RBCs lining the alveoli. When hemoglobin is broken down, KCO levels drop back to normal. 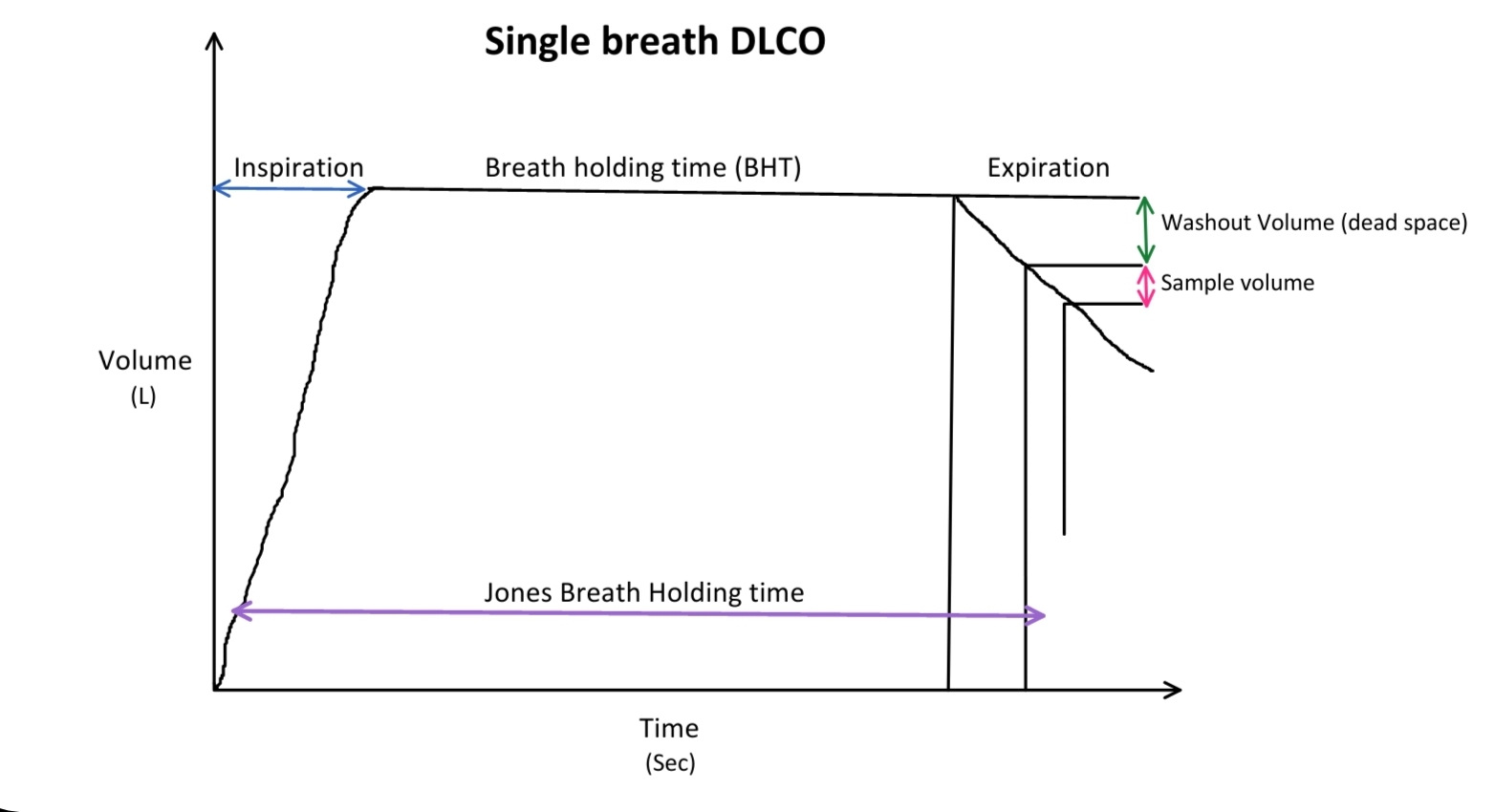 Diffusing Capacity Of The Lungs For Carbon Monoxide